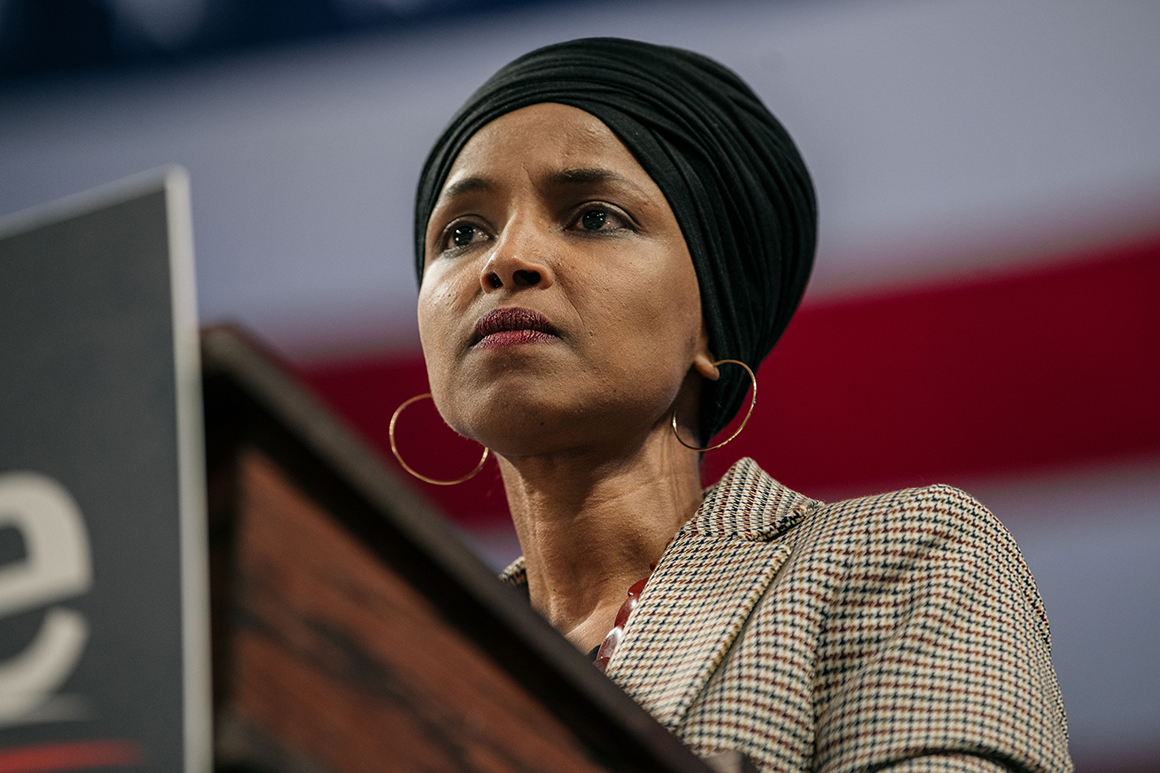 Rep. Ilhan Omar is one of the best-known Democrats from the class of 2018, a lightning-rod member of the Squad whose outspoken liberal politics have made her an enemy of Donald Trump.

Back home in Minneapolis, however, her polarizing national profile is complicating her bid to win a second term.

Facing a political newcomer who raised a jaw-dropping $3.2 million last quarter — much of it from pro-Israel donors who oppose Omar’s foreign policy stances — Omar suddenly finds herself on the defensive against claims that she’s too divisive to effectively represent the solidly Democratic district.

“We don't need someone distracted with Twitter fights,” said primary challenger Antone Melton-Meaux, who pledges to focus on local issues and avoid the spotlight. “I don't want to be a celebrity. I want to serve the people, and people are tired of the politics of division and distraction.”

The first Black Muslim woman to serve in Congress, Omar has built an image as a progressive champion who isn’t afraid to stand up to Trump. The president, in turn, has frequently singled out the freshman lawmaker, disparaging her as an anti-Semite, an “America-hating socialist” and falsely claiming that she publicly supports al Qaeda.

A Somali refugee who is the first member of Congress to wear a hijab, Omar was attacked in xenophobic terms by Trump in 2019 when he encouraged her and other members of the Squad to “go back” to where they came from. As a result, supporters rallied around Omar in the district, which is the most strongly Democratic in the state.

Yet many constituents have been alienated by her comments about Israel. Omar has been accused of anti-Semitism after suggesting support for Israel was popular due to campaign donations, that pro-Israel lawmakers had dual allegiance to both the U.S. and Israel and Israel had “hypnotized the world.”

“Rep. Omar's past comments invoked age-old anti-Semitic tropes and rhetoric that echoed and brought about the nightmares of persecution,” said Rabbi Avi Olitzky, who leads a congregation in the district.

Olitzky threw his support behind Melton-Meaux, who has spoken out about Omar’s comments about Israel, and said the challenger brings desperately needed conflict resolution skills to the political climate. 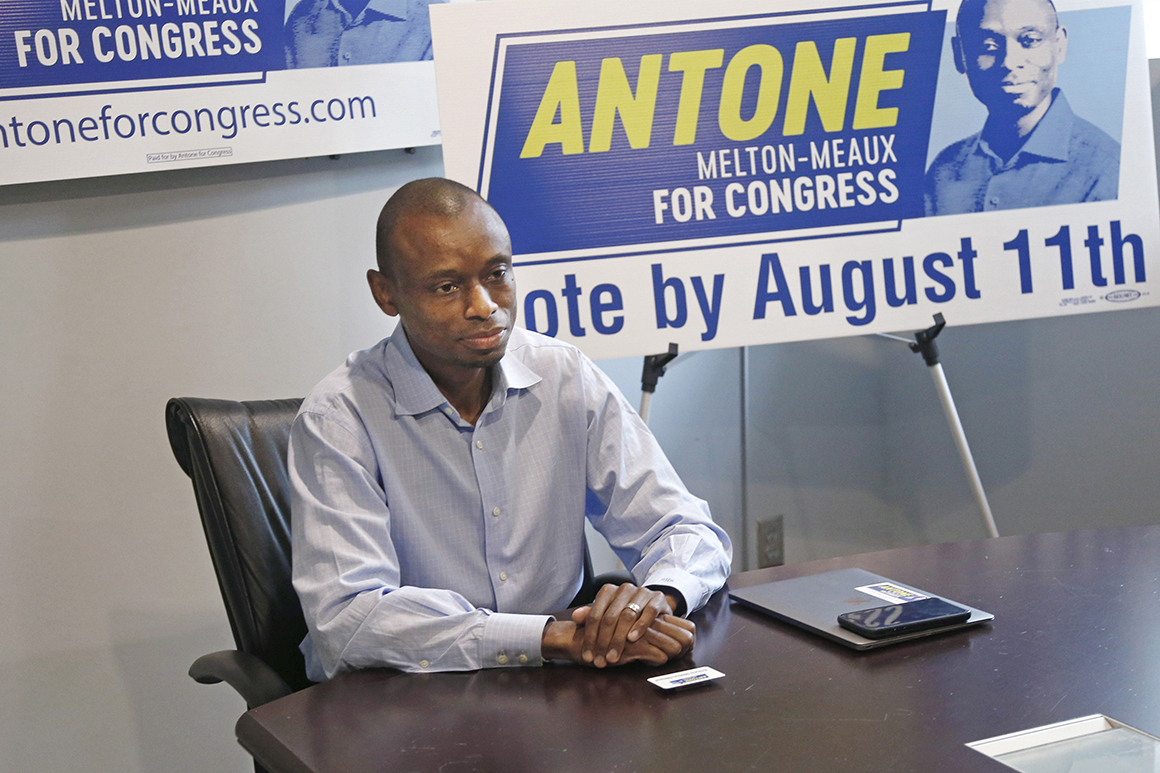 “You've got an opponent who is playing on these divisions with resources to build his name recognition and take the fight to Omar,” Jacobs said. “Can she counter that with less money and with political skills that have not been impressive to this point?”

A significant swath of the Fifth District’s Jewish community has an uneasy relationship with Omar, according to Steve Hunegs, the executive director of the Jewish Community Relations Council for Minnesota and the Dakotas. But Hunegs added the community is not monolithic and some progressive Jews are behind the incumbent.

Omar voter Liz Loeb said as a Jewish person, she was hurt by Omar’s rhetoric, but does not think the lawmaker is anti-Semitic.

“I need a representative that advocates for, and cares about and understands the experiences of people who are marginalized within communities,” Loeb said.

Allies of the first-term lawmaker say Omar has reached out to the Jewish community and point to her apology in 2019. In a sign of her support from the national party establishment, House Speaker Nancy Pelosi endorsed Omar earlier this month — a year removed from Pelosi’s rebuke of the congresswoman.

Omar is also backed by former Rep. Keith Ellison, who vacated the seat when he ran for Minnesota attorney general in 2018. Omar won an open, six-candidate primary that year with 48 percent of the vote and triumphed in the general election by nearly 60 percentage points.

Still, pro-Israel bundlers are making her defeat a priority this cycle, angered by her support for the Boycott, Divestment and Sanctions movement. And Melton-Meaux has been backed by pro-Israel PACs who oppose Omar’s foreign policy stances. A super PAC that backs America’s alliance with Israel is even starting to air Omar attack ads in the district.

“You can judge someone’s values by where they're taking money from and who's fueling and funding their campaigns,” Martin said.

Jeremy Slevin, Omar’s communications director, hit back at claims that Melton-Meaux is a unifier and criticized his past work as a corporate lawyer representing employers.

“I feel pretty strongly that the image he is presenting in his primary challenge is bogus,” Slevin said.

Slevin also took issue with Melton-Meaux’s casting of Omar as out of touch with her congressional district and in search of the limelight.

“I think it's demeaning for someone to suggest that because a leader is subject to routinely racist and xenophobic attacks from the president, that they are therefore seeking celebrity,” Slevin said.

Although Melton-Meaux’s substantial fundraising numbers catapulted him into contention for the seat that encompasses Minneapolis and its first-ring suburbs, Omar is still viewed as the favorite in the Aug. 11 primary.

The congresswoman’s recent internal polling showed her leading Melton-Meaux 66 to 29 percent, with a 74 percent approval rating. The Melton-Meaux campaign blasted the poll as methodologically flawed but declined to share specifics from their own polling.

Melton-Meaux said his message, which centers around criticizing Omar for her voting record and her controversial comments on Israel, is resonating.


He called out Omar’s vote against the USMCA trade deal and present vote on a resolution condemning the Armenian genocide. And he ripped her for missing nearly 5 percent of votes during her first term.

Martin, the DFL Party chairman, said he was confident Omar would win next month’s primary, backed by the state party’s support and what he said was a groundswell of voter mobilization following the police killing of George Floyd -- which occurred two miles from Melton-Meaux’s home.

Melton-Meaux noted that the incident led him to reflect on his experiences with law enforcement. As a law student at the University of Virginia, Melton-Meaux said police detained him for a crime he did not commit.

“I know without a shadow of a doubt, but for a few circumstances, that could have been a knee on my neck,” he said. “So to see former Officer Chauvin snuff out the life of George Floyd over eight and a half minutes in broad daylight in the city that I love was heartbreaking.”

Minneapolis lawyer Don Lewis, who is endorsing Melton-Meaux, says his main issue with Omar isn’t her controversial comments on Israel, but her lack of connection with the district’s needs. Lewis, who is Black, said he views Melton-Meaux as an effective coalition builder whose background as a descendant of African enslaved people is meaningful.

Melton-Meaux is betting on more voters like Minneapolis resident Pam Goldfarb Liss in order to win on Aug. 11. She supported Omar in 2018 and consistently votes the DFL party line. But now, she says she is voting for Melton-Meaux because she feels Omar is more concerned with fighting Trump than standing up for her constituents.

“I would like to have a mild-mannered representative who builds bridges and gets things done for Minnesota instead,” Goldfarb Liss said.