NEW YORK — Andrew Yang’s grip on the New York City mayor’s race continued to loosen this week, as rival Eric Adams maintained a competitive presence in the polls and Yang’s command of local issues was repeatedly called into question.
The former … 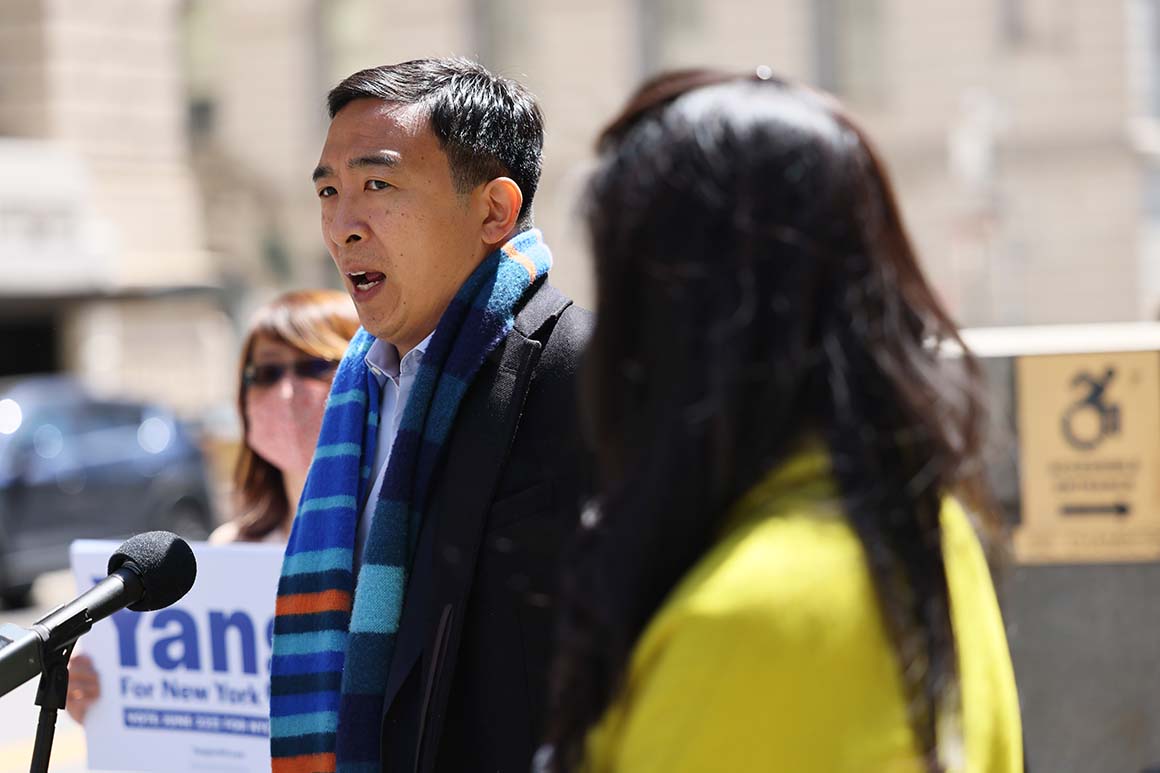 NEW YORK — Andrew Yang’s grip on the New York City mayor’s race continued to loosen this week, as rival Eric Adams maintained a competitive presence in the polls and Yang’s command of local issues was repeatedly called into question.

The former presidential candidate flubbed a question about homeless shelters during a candidate forum Thursday morning, one day after he exhibited a lack of understanding about MTA operations. Later on Thursday, he seemed stumped by the mention of a controversial law governing the discipline records of police and correction officers.

During a discussion hosted by shelter provider Win, Yang vowed to create residential space specifically for survivors of domestic violence. The problem with his answer is such facilities already exist.

“One thing that I think would be extraordinarily helpful is to have specific shelters for victims of domestic violence, who are often fleeing from an abusive partner,” Yang said during the forum. “It’s a distinct population with distinct needs, and they should have separate [facilities].”

At that point moderator Courtney Gross, a NY1 reporter, corrected him and noted the city already provides those types of shelter.

Yang then tried to walk back his comments, suggesting he knew that but wanted an expansion of the facilities. “Oh, no, they — of course they do exist, so that’s one aspect of something that we should be increasing capacity of,” he said.

His campaign website calls for increased services for survivors of domestic violence.

“Domestic violence is one of the main drivers of women and children ending up in shelters. However, only 23% of the domestic violence victims are in specialized DV shelters. The overwhelming majority are in the regular shelter system and are not receiving appropriate services,” the site reads.

His rivals pounced when Gross tweeted the exchange.

“It turns out not only is Andrew Yang underprepared to be mayor of New York City but, apparently he's underprepared for every forum, debate, and press conference he steps into,” Adams spokesperson Madia Coleman tweeted.

Candidate Scott Stringer, the city comptroller who has been trailing Yang in the polls, tweeted: “To be this ignorant about something this important is yet another reason @AndrewYang is not fit to be mayor. These shelters exist. The next mayor needs a plan to make them more accessible.”

Later in the day, Yang appeared confused when asked a question about 50-a, the name of the statute that previously shielded law enforcement officers’ discipline records from public disclosure. The state Legislature repealed the law last year, sparking a lawsuit from police unions.

“Do you agree with the repeal of 50-a” he was asked during a police-focused campaign stop in Brooklyn Thursday.

“This is not the — it’s not the mandatory interview of the—” he began, at which point City Council candidate Edwin Raymond, who stood beside Yang at the podium, clarified the reference.

Yang then replied, “I think that we should get more transparency in terms of police officers and their records and one of the concerns is that if you have officers that do something wrong, like there are times when unfortunately they end up turning up in other environments, in other departments.”

On Wednesday the early frontrunner in the race, who prides himself on a command of facts and figures, was asked by a reporter if he knew about the debt of the MTA — a hurdle he’d have to address to achieve his plan to take over the city’s subways and buses, which are now effectively controlled by Gov. Andrew Cuomo.

“The MTA doesn’t break its numbers out that cleanly, but you’re looking at revenues around eight or nine million dollars and an operating deficit of around three-and-a-half,” Yang said.

Yang likely meant to say "billions," but the MTA dedicates an entire page of its website to the debt, and the state comptroller issues an annual report on it.

He then incorrectly intimated that not all MTA bridges are within the city — only the Port Authority, a bistate agency, has control over interstate bridges.

“Andrew’s positions on issues of police transparency, accountability and public safety are clear as day to anyone who’s willing to listen,” campaign spokesperson Jake Sporn said. “New Yorkers aren’t going to be distracted from the fact that he’s as pragmatic, progressive and thoughtful on these issues as anyone who’s ever competed for this job.

“Whether he recites statutory code numbers and letters is besides the point to anyone else who is listening,” he added.

Jonathan Custodio contributed to this report.