NEW YORK — Mayoral hopeful Andrew Yang on Tuesday denounced attacks on him by rival candidates for playing into anti-Asian racism — tying broadsides against him to a spike in hate crimes in the city.
Yang stood with his wife, Evelyn, Tuesday outside … 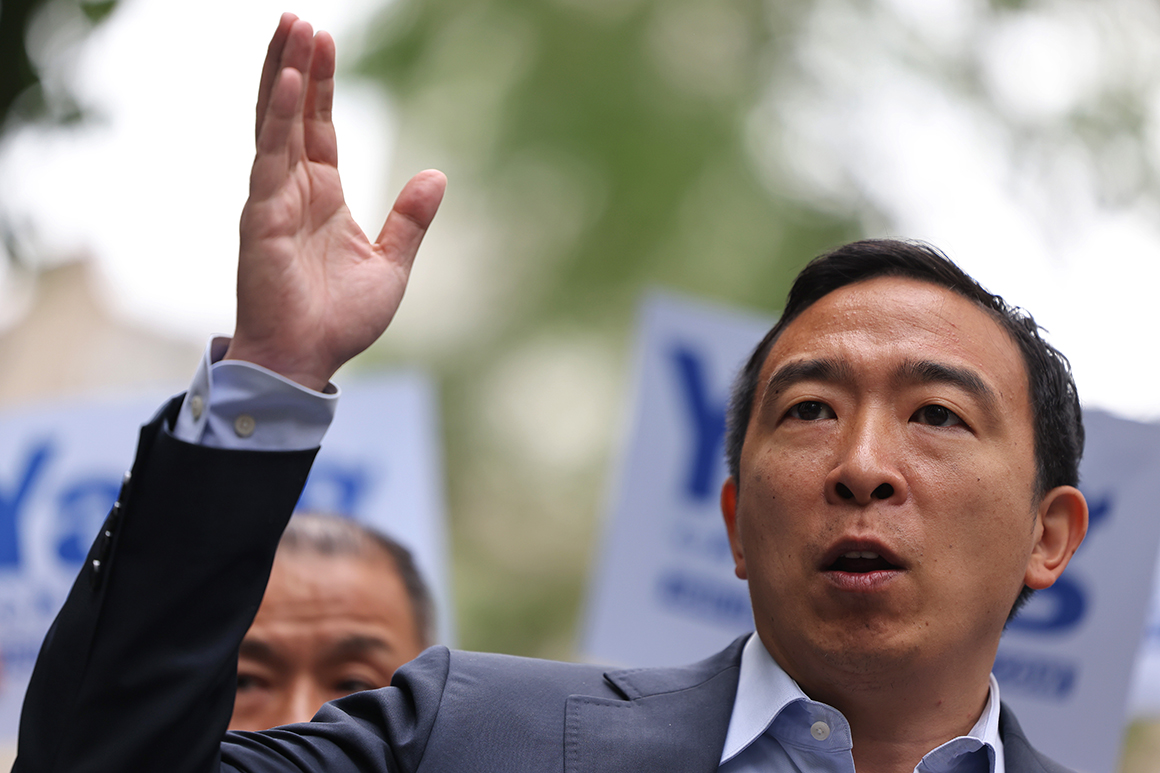 NEW YORK — Mayoral hopeful Andrew Yang on Tuesday denounced attacks on him by rival candidates for playing into anti-Asian racism — tying broadsides against him to a spike in hate crimes in the city.

Yang stood with his wife, Evelyn, Tuesday outside a Queens subway station where an Asian man was shoved onto the train tracks, denouncing a New York Daily News cartoon portraying him as a tourist as well as broader attacks questioning whether he is a true New Yorker. Yang has addressed anti-Asian bias multiple times during the primary season as his candidacy dominated early polling in the race just as hate crimes against New Yorkers spiked in the wake of the Covid-19 pandemic.

Yang was mocked on Twitter after telling an interviewer his favorite subway station is Times Square, near his home in Hell’s Kitchen. The comment inspired a cartoon by Daily News cartoonist Bill Bramhall portraying Yang emerging from the station as a shopkeeper comments “the tourists are back.” The cartoon was denounced for portraying Yang using stereotypes of Asians.

“Every time you make a joke about Andrew not being a New Yorker, you are telling Asian Americans that they don’t belong,” said Evelyn Yang, who grew up in Queens. “Any time someone implies that we are not New Yorkers, that we are not from here, that we don’t belong here, that we should go back to where we came from, it is exactly what it sounds like: It’s racism ... It is deliberate and it is toxic.”

Daily News editorial page editor Josh Greenman defended the cartoon in a statement to his own paper.

“Andrew Yang is a leading contender to be mayor of New York City, and as commentators, his opponents and The News editorial board have recently pointed out, he’s recently revealed there are major gaps in his knowledge of New York City politics and policy. Nor has he ever voted in a mayoral election,” Greenman said. “Bill Bramhall’s cartoon is a comment on that, period, end of story. This is not a racial stereotype or racist caricature.”

He added that Yang's eyes had been redrawn to address complaints raised about the original version. The Daily News tweeted the cartoon again Tuesday afternoon along with several other politicians depicted in unflattering ways, with the note "Politics is a tough game in NYC"

Throughout the campaign, Yang has faced criticism about his New York bona fides, some of it couched in humor and some more serious. When he entered the race, multiple rival campaigns mocked him as a neophyte. Yang left the city for a second home in New Paltz at the height of the pandemic, and has not voted in previous city elections.

He drew mockery on social media for his definition of the bodega, though the store owner defended the description.

Last week, rival camps went after Yang for a lack of knowledge of city government, after he appeared not to know what a police discipline record law known as 50-a was and flubbed questions about the MTA.

Yang did not name the rival candidates he was referring to and declined to specify which attacks he considers out of bounds.

“Saying something like ‘welcome to New York,’ I just chalked it up to politics. But if you have a pattern, particularly in an era when Asians are being cast as foreign and even being victimized on the basis of their race, then it becomes impossible to ignore,” he said, apparently referring to a quote from Scott Stringer’s campaign when he entered the race.

“Anyone who’s been observing the campaign knows what I’m talking about so I’ll just leave it to you to just go through people’s past statements,” Yang said.

Team Stringer said its attacks on Yang were based on his record, not his ethnicity.

“Andrew Yang has never voted in a single city election and jumped into the mayor’s race after leaving the city during the pandemic because he 'couldn’t imagine' staying," said Stringer spokesperson Tyrone Stevens. "There has been a legitimate question from day one of his candidacy whether someone who’s never demonstrated any connection to the city’s civic life should be elected as its mayor."

Yang, who is of Taiwanese descent, moved to the city 25 years ago. He grew up in Westchester County, north of the city.

Several other Asian-American leaders joined the couple in blasting the Daily News cartoon.

Evelyn Yang said complaints were lodged with the newspaper after the cartoon was published online, but it nonetheless ran in the print edition.

“This cartoonist disfigured Andrew’s face. He has overtly beady, slanted eyes,” she said. “We told them this is unacceptable. This is racist. This perpetuates the trope of the Asian foreigner.”

A spokesperson for Daily News parent company Tribune Publishing did not respond to a request for comment.

“Now that racist humor is causing bloodshed on our streets, Asians terrorized, beat up and left for dead just because they’re Asian, and other people don’t think that we belong here. It is very hard to explain this to our children,” the candidate’s wife said.

Mayoral candidate Maya Wiley also denounced the cartoon. “@AndrewYang should not have to endure this. No New Yorker who is Asian or Pacific Islander should. This is an offensive cartoon and we all have an obligation to call it out,” she said in a tweet.