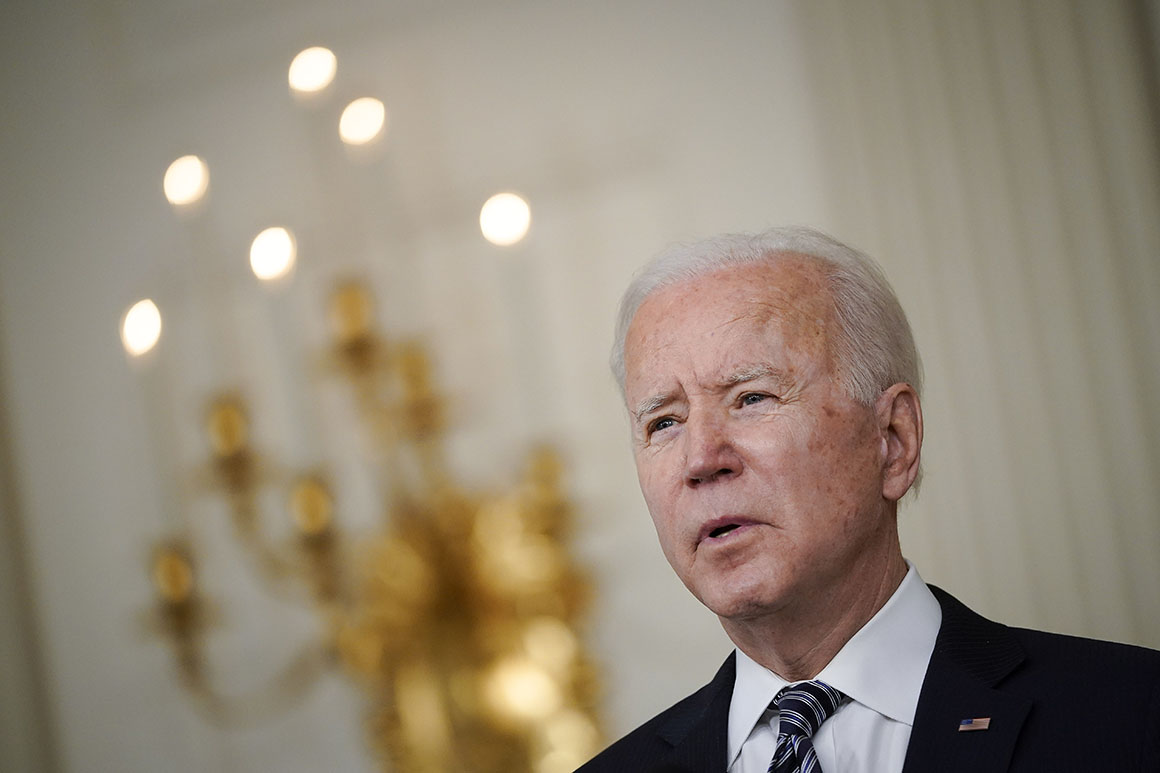 Filibuster reform advocates are ramping up pressure on the White House to embrace an overhaul of the Senate rules, arguing that if a change isn’t made soon the party will endanger its tenuous grasp on power.

It appears to be working.

Inside the White House, there is a growing belief that the president’s agenda will be at risk—and the Senate itself at risk of irrelevance—if the current rules remain in place, two people familiar with internal White House discussions said.

On Tuesday night, the president endorsed a form of the talking filibuster, saying senators should have to “command the floor” and “keep talking.” He was careful to note that he doesn’t think Democrats have to eliminate the arcane legislative tool and he also did not say a talking filibuster change should nix the 60-vote threshold for passing legislation. A White House official reiterated on Wednesday that Biden is closely watching the reform proposals taking shape on the Hill but that he still wants to find a way to work with Republicans.

But the comments, however deliberate, were interpreted by advocates as a sign of newfound openness to rules reform. They came amid pressure from top White House allies, including House Majority Whip Jim Clyburn, to take into consideration the political futures of newly-elected Democrats in vulnerable seats, particularly when GOP-dominated states are passing voting restrictions.

At the heart of their argument is a proposition: if the filibuster is used to stymie voting and civil rights legislation, the minority in the Senate will remain protected to the detriment of minority voters.

“This whole thing that the filibuster cannot be changed, that's almost like saying to me Brown vs. Board of Education was wrongly decided. That's what you're saying?” Clyburn (D-S.C.) said in an interview.

“We've got 50 Democrats, Warnock and Ossoff are two. Since when did Sinema and Manchin get to be more important than Ossoff and Warnock?” said Clyburn, referring to newly-elected Georgia Sens. Raphael Warnock and Jon Ossoff and moderates Kyrsten Sinema of Arizona and Joe Manchin of West Virginia. “They all got us to 50. So this whole notion that we’ve got to do what Manchin says — Warnock is up in two years for reelection.”

READ:  'We’re not going to stop’: Lawmakers press ahead with Trump-era investigations

While Biden and other top White House officials have carefully repeated talking points that any change in the filibuster is up to senators, behind the scenes, senior White House aides have been in touch with Senate Democratic leaders about how best to approach the issue. Those talks have partially focused on Manchin’s demonstrated ability to gum up the works, delaying, for example, the vote on the Senate’s Covid relief package last month for hours while demanding changes.

Among the discussions within the White House is whether the administration could reform or eliminate the filibuster on only certain issues, including on a major voting rights bill.

Aides argue behind closed doors that the fact that the Covid relief package passed without one Republican vote, despite securing more than 70 percent approval in various polls, only strengthens the case that some form of filibuster reform may be inevitable, according to two people with knowledge of White House conversations.

Outside groups have focused their lobbying efforts for now on top Biden aides, including chief of staff Ron Klain. Several sources in contact with the White House say the thinking is to give Biden space on the issue. He needs time to come to the recognition that “fixing the filibuster is saving the institution” he reveres, one of the sources said.

“You can see the mind shifting and swirling,” the source added.

The evolution for Biden on the filibuster was gradual. Early in his presidential campaign, he was not inclined to shift on the issue. “It was a hard ‘no,’ said one person familiar with the president’s thinking at the time.

As the campaign wore on and Biden spoke to more groups about the topic, “you got the sense that things were changing,” the person said.

Around Biden, party luminaries began publicly embracing filibuster reform. Former President Barack Obama called the filibuster a relic of the Jim Crow era last July. Former Majority Leader Harry Reid called for its abolition. Civil rights leaders and key Democrats have openly and increasingly encouraged it to be scrapped. And Clyburn has remained one of the most vocal and consistent forces behind changing the rules.

Within Biden’s inner circle, however, there have been split opinions on the matter. His close aide, Bruce Reed, who currently serves as a top White House adviser, wrote a Clinton administration memo in 1994 calling for the consideration of reforms including the filibuster’s abolition.

“We should consider mounting a drive to eliminate dilatory rules like the filibuster, which is now a prime obstacle to getting things done,” the memo read. “Republican senators have used the filibuster more in the first two years of this administration than at any time in American history. Once reserved for the weightiest matters of constitutional import, it now is used to effectively require a 60 vote supermajority for any legislation.”

But Biden’s longtime Senate chief of staff, Ted Kaufman, who ran his transition effort, has been an outspoken voice for preserving the filibuster. Kaufman’s commitment to the filibuster has been so pronounced that he and Sen. Mark Udall (D-Colo.) wrote the forward to a 2012 book called “Defending the Filibuster: The Soul of the Senate.”

Richard Arenberg, the book’s co-author, told POLITICO that Kaufman shared a copy with Biden, who read it and sent Arenberg a note telling him it should be required reading for everyone in the Senate.

Fast forward nearly 10 years, and the filibuster is now being presented by a growing number of Democratic lawmakers as an impediment to implementing core policies addressing systemic racism and voter suppression that are critical to maintaining the Democratic base.

When a provision to raise the wage floor to $15 an hour got killed by the Senate’s budget rules late last month, Sen. Bernie Sanders (I-Vt.) again told White House officials that the only way it would ultimately pass is if they abolished the filibuster. Sanders said it would help if the administration indicated support for changing the rules. The White House responded that they weren’t ready to go there at that time and added that they may or may not eventually reach that point, according to a source familiar with the discussion.

“If you're going to have a confrontation over the filibuster that should not be your first position,” said David Axelrod, a former senior adviser to Obama. “It should be your last.”

Advocates say they’re more than comfortable with the posture the White House has taken and thrilled by the pace at which the debate has moved. Prior to Biden embracing some vague rules reform, Manchin, an open reform skeptic, did the same, though he too has not budged on keeping the 60-vote threshold for legislation in place.

"You've seen enormous developments in the last few weeks,” said Sen. Jeff Merkley (D-Ore.), one of the primary filibuster reform advocates on the Hill. In the past month, Democratic Sens. Dick Durbin (Ill.), Amy Klobuchar (Minn.), Tina Smith (Minn.), and Catherine Cortez Masto (Nev.) have all called for reforms to the filibuster. And “the president of the United States [is] changing his position and seeing the obstruction currently underway,” Merkley said.

But Merkley warned that if Biden and Democrats enter the 2022 midterms without passing election and voting law reforms, criminal justice legislation, or a minimum wage hike, the political ramifications could be great.

If the filibuster remains intact and blocks the passage of far-reaching voting rights protections, the Senator said, “Democrats will be crushed because voter suppression will go into effect in swing seats throughout America.”