The former vice presidency sees the ghost of Hubert Humphrey. 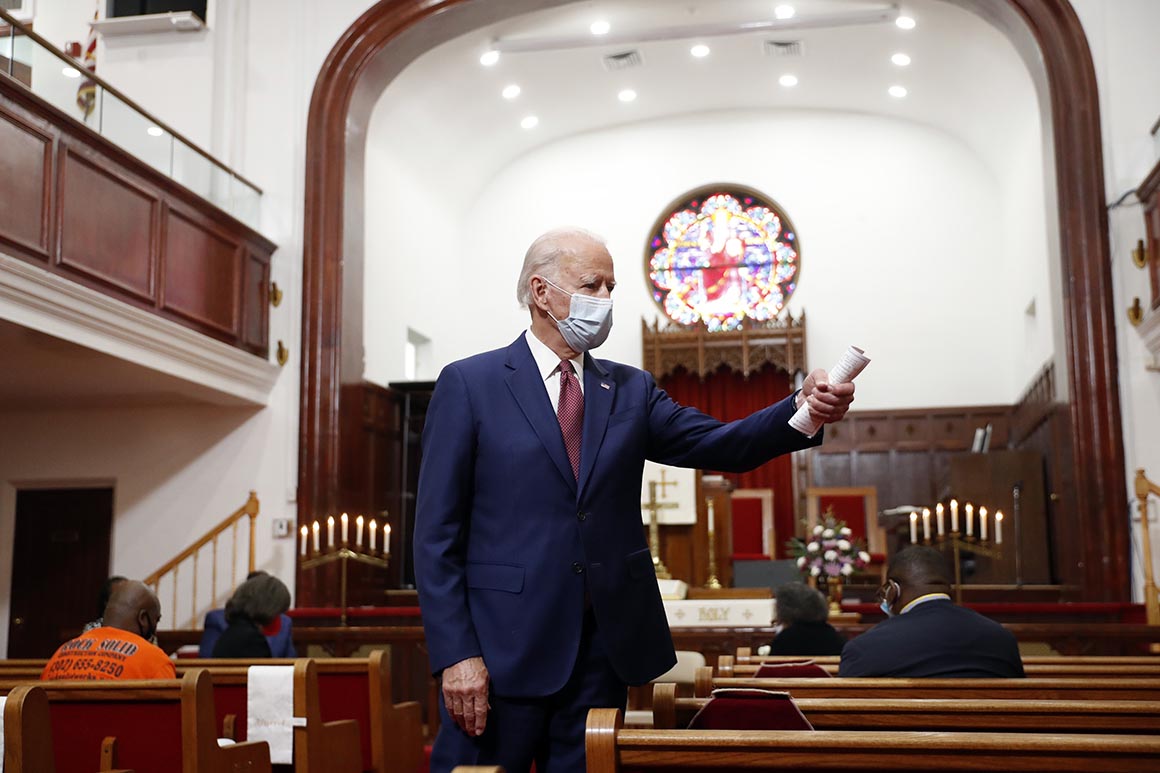 There are many voices who see the violence and despair sweeping America this spring as the natural result of everything President Donald Trump stands for—of his divisive language and policies and worldview.

It is easy to miss, but embedded in these condemnations is a perverse form of praise: The critics do not doubt the efficacy of Trumpian politics. To the contrary, the condemnations assign the president an undeniable agency. There is a clear link between ideas and consequences. People excoriate Trump, and in so doing ratify his relevance.

Relevance is the quality needed most urgently now by Joseph R. Biden Jr.

This is a moment that challenges more than his limited stylistic range. The obstacles for the former vice president are more daunting than the logistics of being housebound in a pandemic. The crisis calls into question the earnest, cheerful, incremental brand of progressivism that animated Biden’s career for a half-century.

The picture of American cities aflame across the continent, in response to what African-Americans credibly regard as widespread police brutality and racism, is a soul-depleting return to an earlier age.

As it happens, it is an age the 77-year-old Biden knows well. He told an audience last year he decided to organize his life around politics during the violent traumas of 1968—the assassinations of Martin Luther King Jr. and Robert Kennedy, and the racial and anti-war riots that ensued across the country that spring and summer.

Biden’s own words make the year a useful prism for viewing both his present circumstances—even a few weeks ago they would have seemed beyond belief—and the broader premises on which a lifetime in politics have rested.

READ:  Foster and migrant kids shut out from Covid vaccinations

Biden was 25 years old for most of 1968, working as a clerk at a Delaware law firm. Forty years would pass, all but four of them in the U.S. Senate, until Biden was tapped as running mate by Barack Obama on his way to becoming the nation’s first African-American president. There was an event that affirmed the essence of Biden’s steady, temperate liberalism—striking evidence that the system is on the level, that history moves toward light, that people of good will can overcome America’s original sin of racism.

Could Biden, or even Obama, possibly have imagined 12 years ago how perishable those gains would seem today? How profoundly many African-Americans, and others, believe many institutions are simply not on the level and are not getting gradually better? And how, in such a climate, the voice of a divisive but omnipresent performer like Trump could make Biden seem almost inaudible in the storm?

As it happens, 1968 also offers another vivid example of a progressive but conventional politician out of step with the urgencies of the moment. Although Biden, like many Democrats of his generation, often invoked the Kennedys as a political figure he more closely resembles another tragic leader of that time: Vice President Hubert H. Humphrey.

Humphrey that year was defending President Lyndon B. Johnson’s unpopular war in Vietnam, a problem Biden thankfully does not have. But like Biden (who later served with Humphrey in the Senate before his 1978 death), the vice president was a garrulous man whose personal decency and progressive instincts were genuine and widely respected, even by Republicans. And like Biden—at least as 2020 has unfolded so far—Humphrey had trouble finding the right emotional pitch during a year of national anguish.

READ:  What a Joe Biden Cabinet Pick Might Mean for Native Americans—and Democrats

When he announced his candidacy in late April 1968—a few weeks after King’s murder and not quite six weeks before Kennedy’s—he spoke of wanting to infuse his party with a “politics of joy.”

It was a line that flowed naturally from his own ebullient personality—and seemed shockingly disconnected to the country’s reality. Kennedy mocked him in reply: “It is easy to say this is the politics of happiness—but if you see children starving in the Delta of Mississippi and despair on the Indian reservations, then you know that everybody in America is not satisfied.”

Humphrey, who had been a leader on civil rights since the 1940s, would have regarded the problems of 2020 as at least a partial failure of his own legacy. Minneapolis---that genial, sensible, sturdy city which Humphrey once served as mayor—was the same place where Officer Derek Chauvin put his knee on George Floyd’s neck and wouldn’t take it off.

If changing circumstances have left Biden with trouble finding his voice, they of course also present him with new opportunities if he can find it. Here is a country simultaneously battling economic depression that, at least temporarily, evokes the 1930s and psychic depression—the result of rage disconnected from hope—that evokes the 1960s. Surely a man who has lived so much history has some lessons to offer.

The former vice president, wearing a mask and taking notes, met on Monday with African-American religious leaders at the Bethel AME Church in his hometown of Wilmington, Del. It was his most extended in-person event in weeks.

He told the group that in coming weeks he would address the problems of “institutional structures” and “institutional racism” in a series of “very serious national speeches.”

Well, there’s something to wait for. Until then, if he wants to avoid sounding like Humphrey in 1968, Biden might do well to recall what himself was thinking and feeling in that year of violence and fragility.

“Unless I’m mistaken,” Biden told Dartmouth University students, “Donald Trump did for your generation what the loss of two of my heroes did for mine,” he told the students, adding, “What they did was make you realize, ‘My God, we’re in trouble.’ ”