The White House is not ready to quit negotiations with Republicans on infrastructure. But Dems are beginning prep work for if/when they fail. 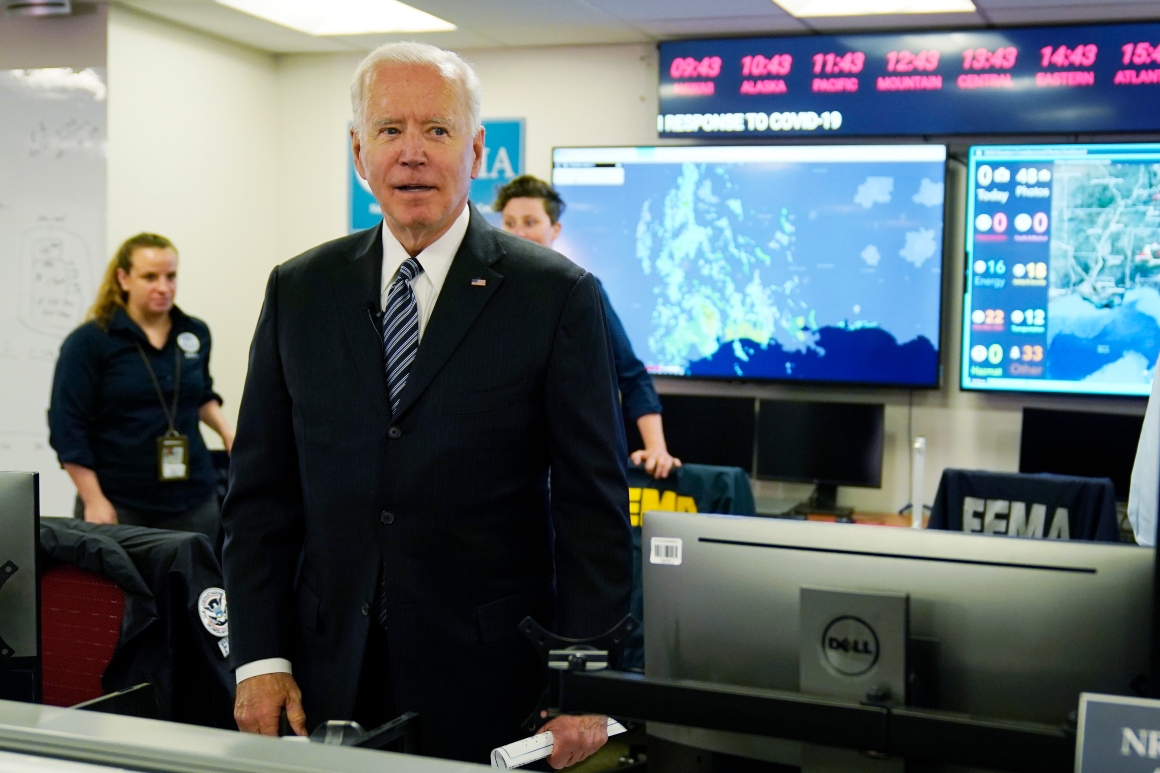 Joe Biden campaigned for president as the consummate dealmaker — the type of backslapping lawmaker who could forge consensus with even the most hardened cynic.

But barring an 11th hour turnaround, his most promising hope for a major bipartisan policy breakthrough — a massive infrastructure deal — could end up slipping through his fingers. It raises questions about how much longer Biden will be committed to reaching out to Republicans in Congress and whether his agenda would be better served if he just abandoned the effort altogether.

White House officials say the president is not quite ready to end talks and begin the process of moving ahead with a Democrat-only bill. They say that discussions with Sen. Shelley Moore Capito (R-W.Va.) had been productive and that she has operated in good faith as a lead negotiator for Republicans. On Monday, Biden hosted Republican Sens. Lisa Murkowski and Dan Sullivan and Rep. Don Young — all of Alaska — albeit to sign an act aimed at boosting tourism in their state, rather than infrastructure.

But on Monday, even members of his own party on the Hill were showing signs of moving on to an all-Democratic approach to infrastructure. Senate Democrats were revving up discussions around the reconciliation process that could serve as a fallback for passing the entire package without GOP support, two sources with knowledge of the talks told POLITICO, including an aide to Sen. Bernie Sanders (I-Vt.), who chairs the Senate Budget Committee.

Even before then, members of Biden’s administration were conceding that if the two sides couldn’t come together on something as seemingly non-ideological as building roads and repairing old bridges, then it would be exceedingly difficult to find common ground on other big policy issues.

“If it can’t be here, then where does that leave us?” Transportation Secretary Pete Buttigieg, who is involved in negotiations with the GOP on infrastructure, asked in an interview last week.

The inability to strike an infrastructure deal would run counter to Biden’s repeated promises on the campaign trail that he would tap his negotiating prowess, honed over decades in the Senate, to win over unyielding Republicans. Already, senators like South Dakota’s John Thune, the second-ranking Republican, have questioned the White House’s commitment to reaching an agreement with them and suggested that the president’s aides don’t share his commitment to bipartisanship.

“Seems like they were doing better when Biden was directly engaged,” Thune said on Monday. “I don’t think the staff discussions have been very productive.”

While White House officials and Biden himself have for weeks engaged in infrastructure talks with congressional Republicans, including inviting GOP members to the Oval Office, the discussions took a major step backward last week. GOP senators balked at a White House proposal to trim roughly $500 billion off its $2.3 trillion proposal by shifting money to other legislative packages — insisting the plan still funded non-traditional-infrastructure items.

The current mood among Republican negotiators is “one of disappointment,” said a Senate GOP aide, who described the status of the talks as having “almost moved backwards” since the small group of Republican senators sat down with Biden earlier this month.

On Monday, the White House responded by saying it had made significant concessions and that it was up to Republicans to make the next move, ideally by adding $500 billion to their roughly $600 billion proposal. But time is running out. The White House had said it would start moving forward without Republicans if there was no significant progress made by Memorial Day.

“It's really a test for Republican senators,” White House press secretary Jen Psaki said in the White House briefing Monday. “Do they want to find common ground? Do they want to engage with the president about moving an agenda forward for the American people? Or, are they going to take all of their direction from [Senate GOP] leadership?”

Republican senators plan to huddle Tuesday morning to discuss how to move forward, including a possible counteroffer.

Biden has long predicted that congressional Republicans would come around to working with him constructively, only to have his post-partisan idealism dashed. As vice president under Barack Obama, he pointed to “two-and-a-half, three dozen Republican House members” who after the 2012 election would feel freer to buck the increasingly rightward tilt of their party to work with the White House on policy prescriptions. He continued to make similar predictions during the Obama presidency, and again expressed hope of working with the GOP when campaigning in 2019 and 2020.

Biden chafed at Democratic rivals as they offered long lists of proposed executive actions they would take in office, and he appeared exasperated by progressive critiques that he was naïve about his abilities to charm Republicans. “If you start off with the notion there's nothing you can do, well why don't you all go home then, man?” he said of Democrats at one point during the presidential primary.

For now, even if Biden goes the reconciliation route on infrastructure, his aides stressed that they aren’t entirely abandoning the concept of working across the aisle. They pointed to a handful of other issue areas — from police reform to a measure to make America more competitive by investing in science and research — as places where they could find common ground. But other topics, including modest proposals on guns and immigration, remain unlikely to garner enough GOP support.

And as talks stalled over the massive jobs and infrastructure package, other partisan standoffs were sprouting up elsewhere. Senate Republicans seemed poised to filibuster a bipartisan commission to investigate the Jan. 6 insurrection and lawmakers have blown the May 25 deadline Biden set for Congress to send him a police reform bill on the anniversary of George Floyd’s murder by a Minnesota police officer. Democrats also are prioritizing voting rights legislation and pandemic-related unemployment benefits that have some fearing a big Capitol Hill pileup heading into an election year when elusive deal-making becomes even harder.

If Republican senators are unable to reach an agreement with Biden on a traditional infrastructure package, the Senate GOP aide said, it doesn’t necessarily bode poorly for other big legislative items like police reform, which "stands on its own." But it’s “setting a bad trend in terms of the relationship” and being able to work directly with the president, his Cabinet and senior staff, the aide added.

On that front, even Biden’s own Cabinet agreed.

“We’re just missing out on the chance to get a lot of policy done through regular order if we can't get a bipartisan deal put together,” Buttigieg said. “But I would also say it would be a missed opportunity to show what we can do together in areas where we know there's a lot of agreement.”

Buttigieg, like others in the Biden administration, put the onus on Congress, saying that the president was not asking them to “back an unpopular idea.”

Though the White House is still holding out for GOP lawmakers to come on board, it has long seen little political risk to pushing through the president’s agenda even without Republican buy-in. Advisers and political allies say that what counts is that Biden attempted to work with Republicans. They also believe that moderate Senate Democrats will only vote for the infrastructure bill if they see the president trying to get bipartisan support for it first.

In the end, the White House believes it’s far more important that Democrats head into the midterms with a list of accomplishments than campaigning empty-handed and blaming inaction on partisan bickering.

“People want to see things done. They're tired of Washington D.C. gridlock. They're tired of the issues that have been talked about for 15 to 20 years with no action,” said Steve Schale, CEO of Unite the Country, a pro-Biden super PAC. “But in the end, you have to have a dance partner. And if the answer is ‘no’ to everything, which is basically what he’s getting, in the end, people want better roads. They want better schools.”

Burgess Everett contributed to this report.