A wave of pandemic-era speculation in Bitcoin and new shell corporations known as SPACs is crashing. Washington policymakers are now scrambling to come to the rescue of investors. 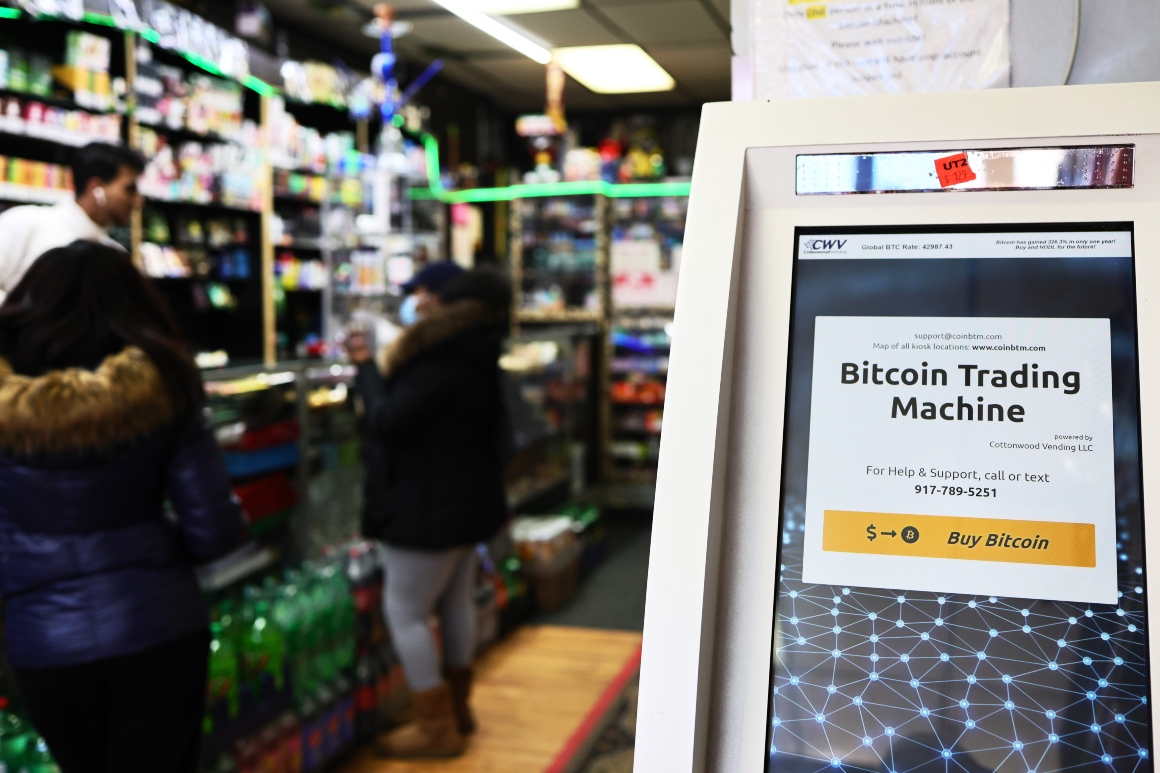 A wave of pandemic-era speculation in Bitcoin and new shell corporations known as SPACs is crashing, and Washington policymakers are scrambling to come to the rescue of investors.

After a year of letting markets run wild, lawmakers are calling for a crackdown amid concern that many small investors are about to be burned. The move for government intervention is increasingly bipartisan as markets gyrate, setting up a clash with business interests.

Senate Banking Chair Sherrod Brown (D-Ohio) urged the Biden administration's new bank cop to stop issuing licenses to financial firms at the heart of cryptocurrency trading. Sen. John Kennedy, a Louisiana Republican, is proposing the first bill to regulate SPACs — special purpose acquisition companies — that have no commercial operations but promise investors they will buy other firms to form conglomerates. The House will hold a hearing on SPACs on Monday.

The intensifying scrutiny comes after Bitcoin suffered a 30 percent drop at one point Wednesday. A market index linked to SPACs is down by more than 30 percent from February. 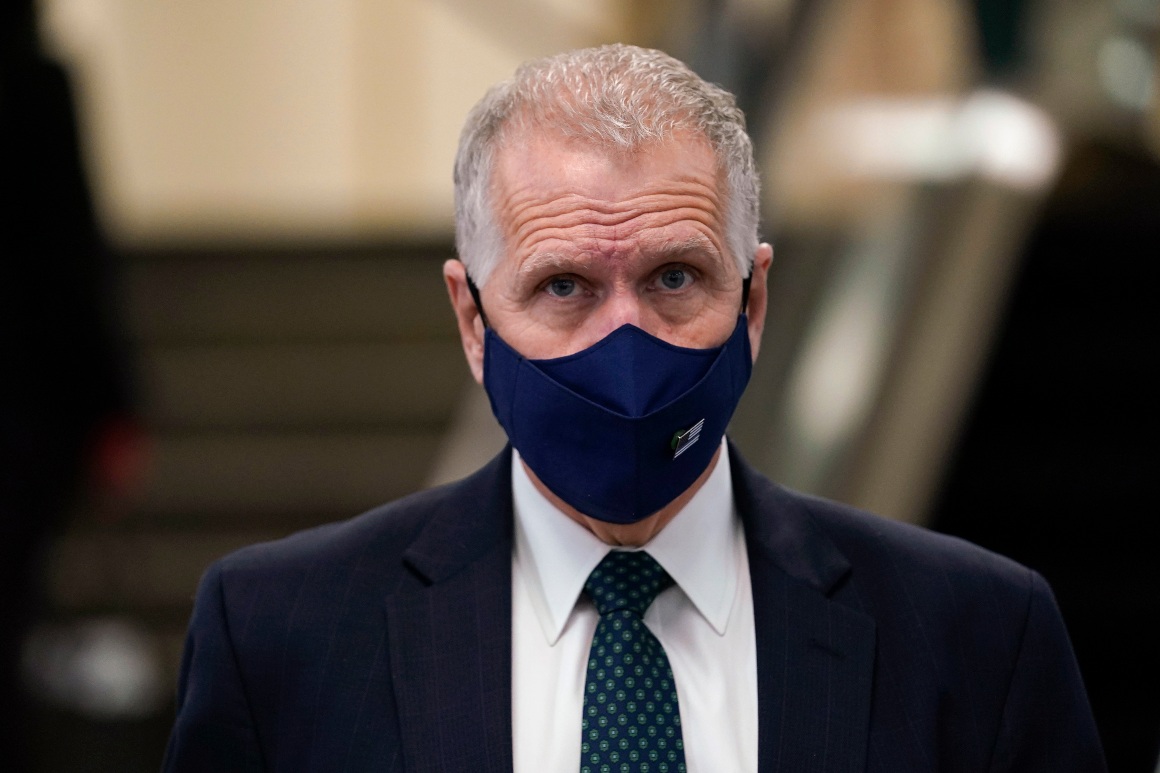 "These are just new creations that we don't fully understand," Sen. Thom Tillis (R-N.C.) said in an interview. "We should probably look at whether or not Congress should play a role in regulation."

That the hottest investment crazes of the Covid-19 era are only now attracting intense oversight shows that policymakers are still coming to grips with the risks facing consumers as the economy struggles to emerge from the pandemic. After Washington policymakers fueled stock valuations by doling out trillions of dollars to businesses and individuals, attention is turning to how investors might be hurt as the market levels off.

Wall Street watchdogs say they’re relieved to finally see action in Congress after warning for months about looming risks. They say the developments illustrate the dangers of the regulators’ hands-off stance on markets during the Trump administration.

"When SPACs, cryptocurrencies and meme stocks had valuations all heading to the moon, there wasn't a lot of tire-kicking on the real risks to investors, but now that some of the risks are turning into losses, we expect a lot more congressional and regulatory focus," said Tyler Gellasch, executive director of investor advocacy group Healthy Markets.

Lawmakers have watched the market frenzy during the pandemic as retail investors rushed to plow extra cash — including government stimulus checks — into the new products with the hopes of reaping big returns. In response, several cryptocurrencies shot up in price, with Bitcoin rocketing from about $10,000 before the pandemic to nearly $63,000 by mid-April — an increase of more than 500 percent.

Before the first quarter of 2021 ended, SPAC IPO activity had already surpassed all of 2020, the year that the investment vehicles took up roughly half the market for new public company listings for the first time, in terms of deals and dollars raised. That has resulted in more than 570 new shell companies established since January 2020 to May 2021, with rights to buy future company shares worth more than $140 billion on the nation’s public capital markets.

But after new retail investors flooded the markets, prospects for the products soured this month. Along with Bitcoin’s price tumble, other major cryptocurrencies experienced double-digit declines this week. The market has also proven to be a boon for fraudsters, with the Federal Trade Commission warning this week that since October nearly 7,000 people have reported losing more than $80 million because of bogus cryptocurrency investments. 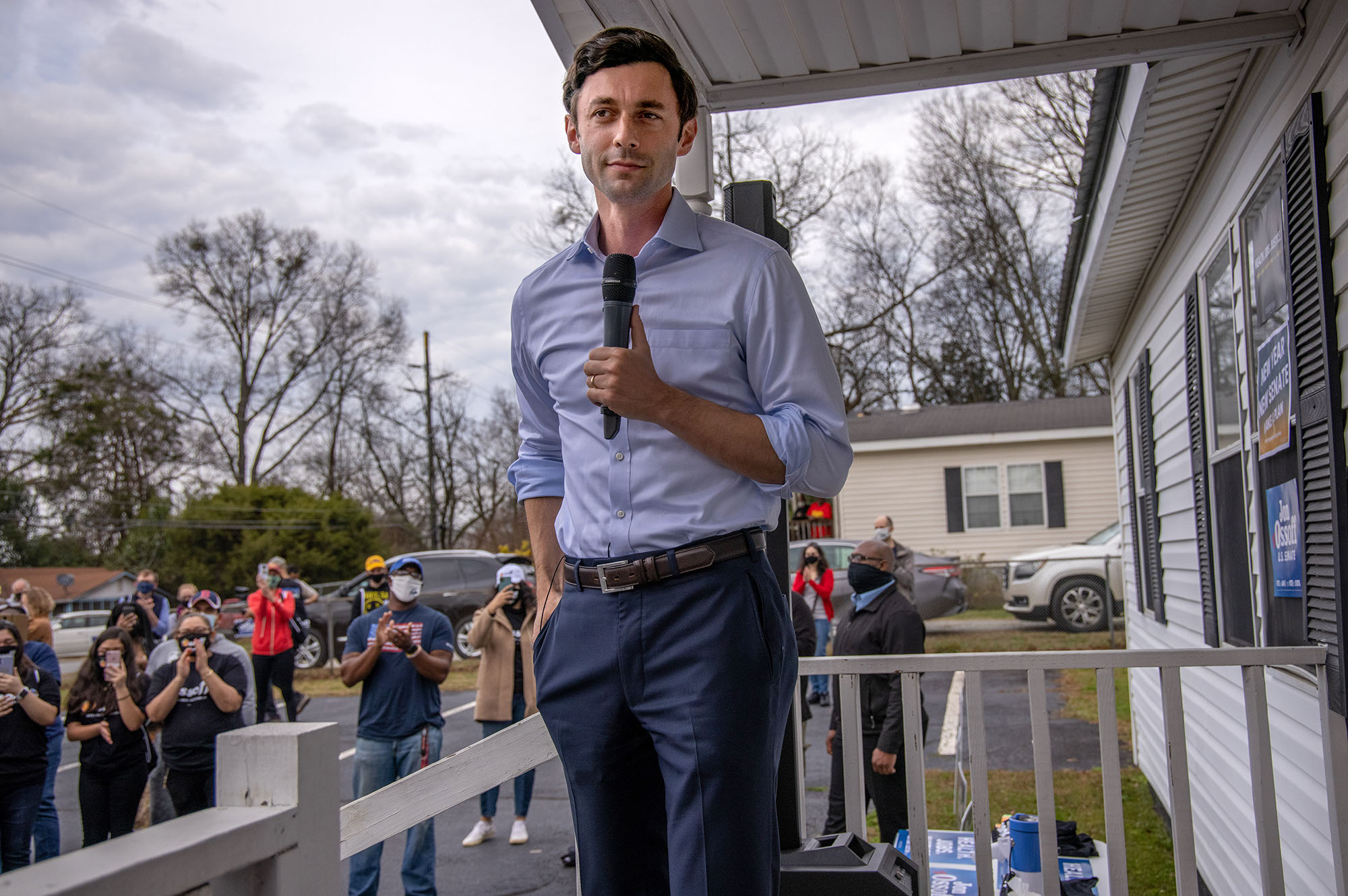 "We learned in 2007-2008 when new financial instruments emerge, it's prudent to assess how the spectrum of risks may change," said Sen. Jon Ossoff (D-Ga.), another member of the Banking Committee. "Regulators need to be nimble, and it's important that they have the authority necessary to ensure the stability of the financial marketplace where technology and new financial instruments mean that they need to adapt."

The decline in SPACs has also been steep, as the companies accounted for $88 billion of the global equity proceeds raised in the first quarter of this year versus $4 billion a year ago. But only 12 of these shells actually accomplished the goal of taking a private company public in the U.S. during April, versus 107 in March, according to an analysis from S&P Global Market Intelligence.

For digital currency in particular, the growing scrutiny raises doubts about a lobbying push by major industry players to convince policymakers that crypto investing is safe and should be available to more investors.

The industry is pressing federal regulators for charters and other approvals in an effort to give more Americans the ability to trade in digital currency and related products.

On Wednesday, Brown urged a top bank regulator appointed by the Biden administration to halt regulatory moves that make it easier for cryptocurrency companies to operate nationally. In a letter to the agency, the Office of the Comptroller of the Currency, Brown warned against granting federal charters to firms that want to expand access to “risky and unproven” digital assets and technologies.

Brown "understands that Wall Street and other bad actors treat the market like a game where workers always lose," said Alysa James, a spokesperson for the senator. "The Great Recession showed how new financial products that promise innovation oftentimes hurt working families the most. We saw this again during the pandemic."

SEC Chair Gary Gensler said at an event Thursday that lawmakers should consider new rules and that regulators in particular should be ready to bring crypto enforcement cases.

"This is a quite volatile — one might say highly volatile — asset class," Gensler said. "The investing public would benefit from more investor protection on the crypto exchanges."

The rise of SPACs is attracting competing reform proposals from both sides of the aisle.

A bill introduced last month by Kennedy would require the SEC to draft new rules for the SPACs, following numerous red flags recently issued by the agency. Kennedy's proposal would require the investment vehicles to disclose more information to investors, in light of concerns that the companies' promoters can often extract large fees that dilute the value of shares.

“There's no free lunch, and you don't get one now,” Kennedy said in an interview. “I understand the concept behind the SPACs and the idea that it's supposedly cheaper than doing a traditional IPO. And that may be the case on the front end. I'm not convinced it's the case on the back end." 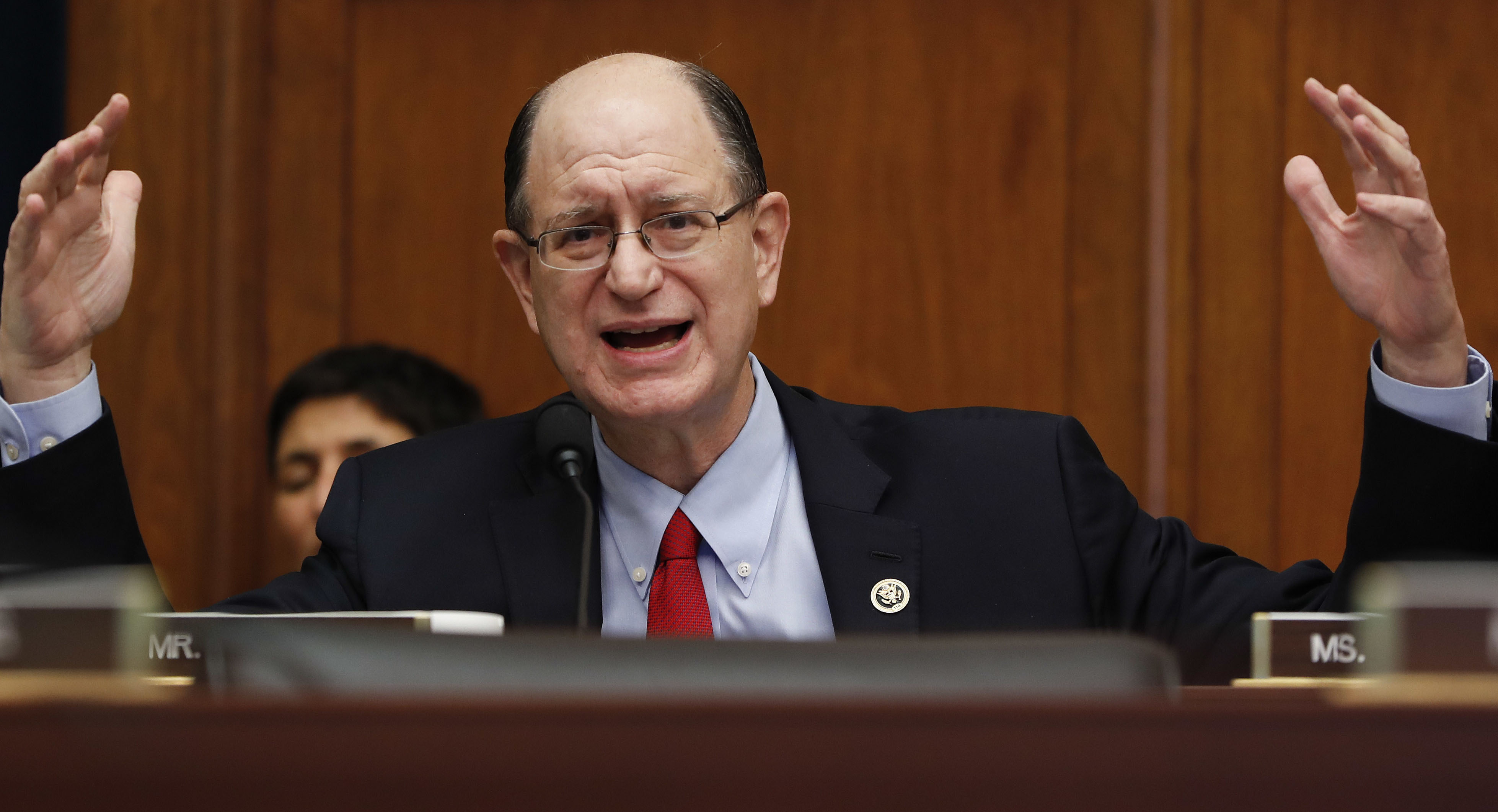 Rep. Brad Sherman (D-Calif.) unveiled draft legislation on Thursday that would also update rules for SPACs. Sherman produced the bill in advance of the Monday oversight hearing on SPACs that he will lead as the chair of the House Financial Services subcommittee overseeing capital markets and investor protection.

"I would be flabbergasted if we looked at this area and saw that there were no problems at all worthy of our attention," Sherman said.

Business groups are beginning to push back.

Crypto trust banks targeted by Brown this week spoke out in defense of their business models. Paxos, which is behind payments giant PayPal's recent move to allow customers to buy, hold and sell cryptocurrency, said it "has sought to be the most regulated, compliant and trusted operator in the crypto and blockchain infrastructure industry."

On the SPAC front, the U.S. Chamber of Commerce is concerned about a provision of Sherman's bill that would remove legal protections that allow the shell companies' promoters to avoid lawsuits over statements they make about a future business while promoting a deal.

“We believe that Congress, and the SEC, both have very important roles to play both with cryptocurrencies, as well as with SPACs,” said Tom Quaadman, executive vice president of the U.S. Chamber Center for Capital Markets Competitiveness. But removing legal protections for SPACs would trigger the Chamber's opposition, he said.

But even lawmakers like Tillis, who say they prefer lighter regulation, argue that it's time for officials to take a closer look at how investors are faring in the new markets.

"We need to really fairly assess the winners and the losers, reasons for the wins and losses, and then determine to what extent we should play a role," he said. "So I’m not predisposed to regulation but definitely think it requires oversight and then action after the oversight."