“If the banks want to come in and claim that they’re on the side of their customers, then it can’t just all be words, they need to act,” the Massachusetts Democrat said. 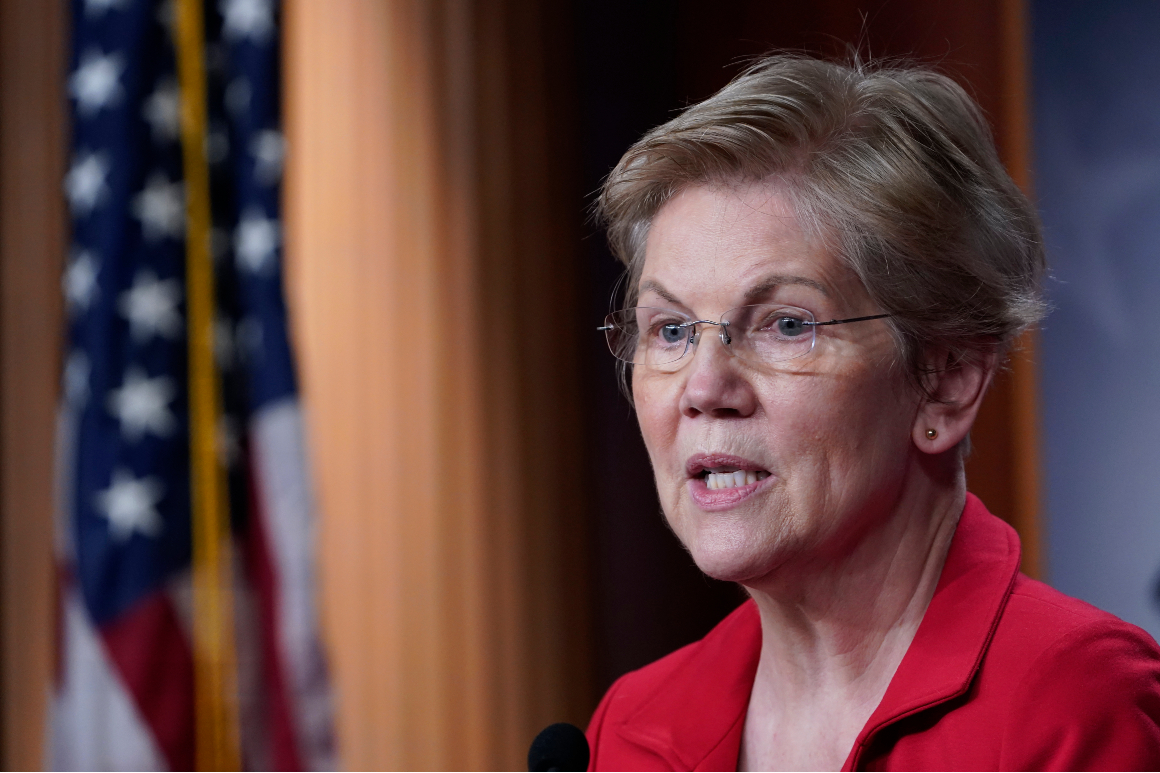 Sen. Elizabeth Warren on Wednesday said federal regulators should be more aggressive in policing bank overdraft charges, after she slammed JPMorgan Chase CEO Jamie Dimon for profiting off the fees during the coronavirus pandemic.

In an interview following a tussle with Dimon at a Senate hearing, the Massachusetts Democrat said big banks imposing overdraft penalties "sucked about $4 billion out of the pockets of families that were struggling." Banks charge the fees when customers spend more money than they have in their accounts.

“We talk a lot about payday lenders, but the big banks are also squeezing families hard when they get into trouble and using practices that increase the number of overdraft fees,” she said. “If the banks want to come in and claim that they’re on the side of their customers, then it can’t just all be words, they need to act.”

Warren's focus on overdraft fees at Wednesday's high-profile hearing signaled that she will try to make it a priority for both banks and regulators, including Biden's upcoming picks to lead those agencies. The issue cuts to the heart about concerns around whether Americans with low incomes benefit from financial services or suffer from predatory tactics.

“Regulators ought to be much more aggressive in monitoring banks’ overdraft fee practices,” Warren said in the interview.

During the virtual hearing with bank CEOs Wednesday, Warren told Dimon "you are the star of the overdraft show” because his company — the largest bank in the U.S. — earned more of the fees per account than its competitors. Witnesses at the hearing also included the CEOs of Bank of America, Citigroup, Wells Fargo, Goldman Sachs and Morgan Stanley.

Warren said she’d like to see the big banks, which are “enormously profitable,” refund those fees, noting that regulators encouraged banks last year to waive fees for overdrafts and late payments.

“You and your colleagues come in today to talk about how you stepped in and took care of customers during the pandemic, and it’s a bunch of baloney,” Warren said.

Dimon pushed back in the exchange and wouldn’t commit to refunding revenue from overdrafts. He said the bank "waived the fees for customers upon request if they were under stress because of Covid.” JPMorgan spokesperson Trish Wexler said the bank waived fees on more than 1 million deposit accounts, including overdraft fees, “no questions asked.”

“One reason Citi bank generates so much less overdraft per account is they aggressively market basic banking accounts with no overdraft fee,” said Aaron Klein, a senior fellow at the Brookings Institution. “It is impossible to believe that JPMorgan customers are inherently that much more likely to overdraft than Bank of America or Citibank’s customers. So how a bank structures its accounts and overdraft protection system matters.”

In response to concerns about the number of Americans without bank accounts, some lenders have started offering “Bank-On” accounts with no overdraft fees, based on standards created by the nonprofit Cities for Financial Empowerment Fund and certified by the Federal Deposit Insurance Corp. That effort is also backed by the American Bankers Association.

Marketing those types of accounts is key to bringing down overdraft fees, said Klein, who recently called out a group of smaller banks for consistently bringing in more overdraft revenue than their total profits.