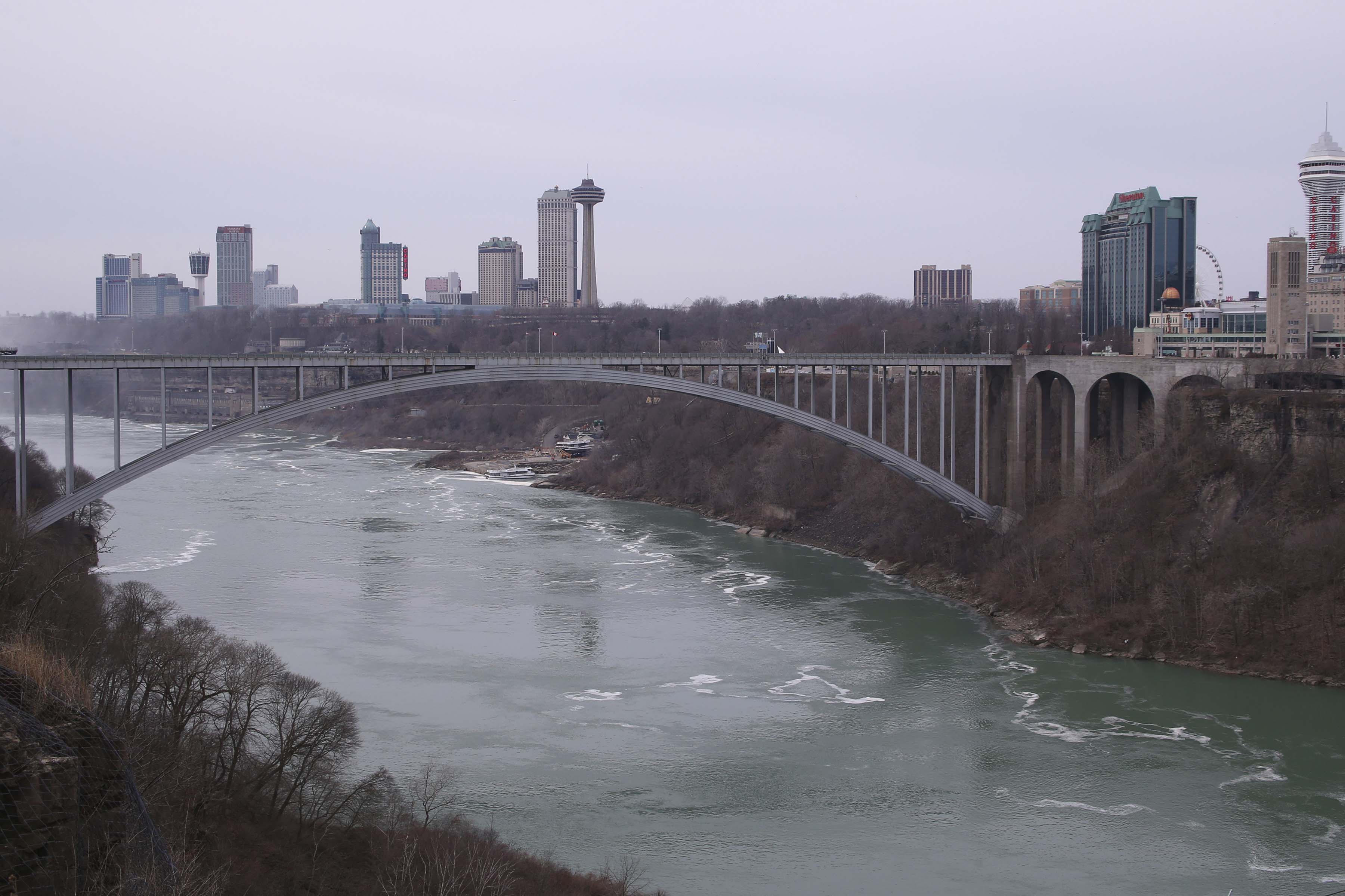 Residents of communities on the Canada-U.S. border are accustomed to running back and forth across the international boundary — to visit family and friends, to enjoy a favorite restaurant, to bargain-shop for gasoline and milk.

But ongoing restrictions at the border spurred by the coronavirus pandemic put a stop to those trips in March, leaving many of those towns financially strapped and socially isolated from their foreign neighbors as Covid-19 cases continue to stay high in the U.S.

Few places better encapsulate how the virus changed the way of life for residents of many border towns than Niagara Falls, the sister cities in western New York and Ontario, Canada. The cities have long served as an international tourist destination.

POLITICO spoke to the mayors of the two border cities — Robert Restaino of Niagara Falls, N.Y., and Jim Diodati of Niagara Falls, Ontario — to learn how the limitations on border crossings are affecting their communities.

The interviews were conducted separately in late August, but both mayors were asked similar questions. Here’s their perspective on a global emergency that’s uniquely affected their hometowns.

Tourist towns grappling with the tourist season that wasn’t

Diodati: It’s eerie here in Niagara Falls. We’re the No. 1 leisure destination in Canada. Typically, we get 14 million people coming to us. We’ve got four border crossings in Niagara and 40,000 people who utilize tourism to put food on the table, to pay their rent, pay their mortgage, pay their education. And we’ve had a lot of things — we've had 9/11, we’ve had SARS, H1N1, mad cow, currency fluctuations — we've had lots of different challenges over the years, but nothing even remotely close to this.

Restaino: We get an awful lot of international tourists, and so with the difficulties obviously with international travel, particularly into and out of the U.S., that’s a large portion of what would ordinarily be the tourist population that comes in during the tourist period. The other thing that’s been difficult, too, have been the various travel advisories that have gone on for many of the states throughout the United States coming into and out of New York State.

Diodati: In the past, you didn’t think twice about crossing the border. And after 9/11, you had to carry ID and passports and the whole world changed, and now it’s shut right down unless you’re an essential service provider. And right now, everyone’s OK with that because they’re just saying tighten up your borders, keep your bubbles. … Let’s keep our borders closed right now, let’s get a handle on what’s going on.

We just recently in the last few weeks hit some of our best crowds all summer. Having said that, I’d say we’re probably up to 40 or 50 percent crowds now of what we would normally have, but, compared to what we had when it was terrible, you were waiting for a tumbleweed to blow across the road. There was nothing.

READ:  How the new Supreme Court could stymie a Biden presidency

Restaino: I can tell you, living in Western New York and most specifically living in Niagara Falls, it’s really like just an extension of another neighborhood separated by the river. There are folks on both sides of the border that have family, there are favorite restaurants and stores that both sides of the border take advantage of. And with the closure, which has now been extended, it seems that that’s more than just a tourist issue — that's really continuing commerce. That's something that’s really affected the local economy quite a bit.

Restaino: Sales tax, hotel, restaurant and utility tax — all of those things that are fundamental pieces of our revenue here in the city — have all been impacted substantially over the course of these last several months. If gas prices are cheaper in Canada, you’ll have a lot of the American folks going over there to purchase gasoline and vice versa.

It really is just another neighborhood separated by the river, and that portion of the economy is substantial when you think about just the ease with which we travel back and forth between one another, so a lot of the shopping, a lot of the restaurants, certainly some of the other just normal day-to-day things that are part of everyone’s life both on this side of the border and on the Canadian side has been curtailed. And we have substantially suffered $4 million or $5 million depending on the category in terms of losses throughout this period.

Diodati: Here in Ontario, all municipalities have been deemed an essential service, so you must maintain your services. … But at the same time, a lot of people are not able to pay their property taxes, so we’re absorbing that hit. And on the other end, we’re not allowed to carry forward an operating deficit. So, you can’t have a deficit, but you don’t have all your money coming in, but you have to keep operating.

Luckily, our upper levels of government have made some announcements that they’re helping us to plug those gaps, and that’s been really helpful. There was a shortfall of around C$4 million for the municipality so far, but we’ve deferred property taxes, and it’s not as bad residentially. But commercially, it’s going to be a challenge, because we’re very heavily weighted toward commercial because of all the hotels, all of the attractions, and they pay big taxes.

Resiliency is part of our DNA, so we’re used to dealing with challenges and adverse conditions. Of course, none like this, but we know we’re going to come out of it because we have to. Failure is not an option.

Restaino: We have to look at the services we provide and find out whether or not that same menu of services is something that the city can provide at a reasonable cost to taxpayers. It’s easy for some on the outside looking in to say that there are other ways to raise this revenue — property taxes, etc. See, nobody’s to blame for this. And so for us to put the burden on taxpayers to try and support what has been a loss of revenue I think is unfair to our small businesses, it’s unfair to our residents. We need to find a way to make that work.

Restaino: I have aunts and uncles, cousins that live just across the river, who has a wedding planned or who has had a baby and there’s a baptism scheduled or there’s a birthday party for a child or for one of our senior relatives. Those things are all postponed. I find myself Zooming into events with my family now, so it’s really been difficult from a personal perspective because we’re used to being able to just go.

Diodati: My mom and dad, every Thursday, they go over the river. That’s what we call it when you live on the border, and that’s what they call it in Windsor, too. … You don’t really appreciate something truly until you lose it. So the silver lining in this big gray cloud is that we’ve come to appreciate things we’ve taken for granted, and we do, we’re spoiled here.

Restaino: There are people here in Niagara Falls that own properties in Canada along the lake, and they’ve just not been able to get to them. Some of them have tried all kinds of creative ways of inventing why they should be able to go but consistently have been turned back at the border.

Policy suggestions for reopening the border — and helping border towns

Diodati: I think there needs to be a way to do it. If I was going to come up with a common-sense approach to it, I'd say something like, you have to have a Covid test within 48 hours of crossing the border. Something like that, so you have Covid results that you can show, I’m clean, I’m clear, I’m safe, so I’m going to see my fiancé or inspect my cottage.

I just don’t think it’s been a priority because everybody’s been nervous. They don’t want to make the wrong decision and then wear it because you screwed things up — you allowed this. If you notice the politicians, they’re letting the medical health people make the decisions because this way if it backfires — it's not me, it was the expert.

Restaino: Some of the things that we talk about obviously are pretty broad-based — relief for local governments in terms of some way of assisting local governments with the expenses or revenue losses. ... We also are talking about a regional approach toward the border in an effort to try and see if some of us can open up our commerce and trade with our Canadian neighbors.

READ:  Fauci says nation can survive Covid-19 without another shutdown

I know from talking with Congressman [Brian] Higgins’ office, they bring these things to the table, they’re advocating and obviously I think that the national conversation about aid to state and local governments is one that’s been going on now since Congress passed their bill. … While that will help us bridge our losses in this year, that still doesn’t eliminate our need to have the border opened again.

What it will take to relax restrictions

Diodati: Our thinking is aligned, and we want to make the right decision. And it’s hard when you don’t have a crystal ball to know what it is — when's the vaccine going to come, is it going to work — there's so many questions because nobody quite knows.

I think right now, given the fact that, early November, there’s going to be a U.S. federal election, we’re trying to stay out of the politics of the United States. … So, we’re thinking at this point, just leave the borders, don’t touch anything, let’s get through this election, let’s not be a reason for having an impact one way or the other. We just want to stay right out of it. And then, when would it be after that? It depends I guess on who wins — that’ll be a big factor — and how it plays out, and the vaccine, when it comes out.

I’d say probably in the New Year. I think realistically that’s probably when we’re looking at it, all things considered.

Restaino: The United States has to get a better handle on the pandemic and the growth of cases and the spread. Because otherwise, what’s happening, we’re the ones actually creating the disincentive to have that border open. We're all trying to push for some type of regional approach where it’s not the whole several-thousand-mile border, but that’s not getting a lot of traction because obviously once you open one spot, it becomes a porous border again. I think everyone is really trying to avoid what could be just a rebirth of the original months of this thing.

Diodati: I think a lot of people, as soon as the vaccine is out and it’s proven, they’re going to be lined up at the border itching to come over. ... I think we’re going to bounce back. We’re going to be fine. It’s going to be a little bit of a dimmer-switch approach to bouncing back, but I think we’ll surprise people with how quick that we’re able to, because people still need to have fun. They’ve been serious, they’ve been stressed, they’ve been full of cortisol and anxiety, and they’re looking for more serotonin, more fun.