According to House Democrats, Lt. Col. Yevgeny Vindman filed a complaint with the Pentagon’s inspector general. 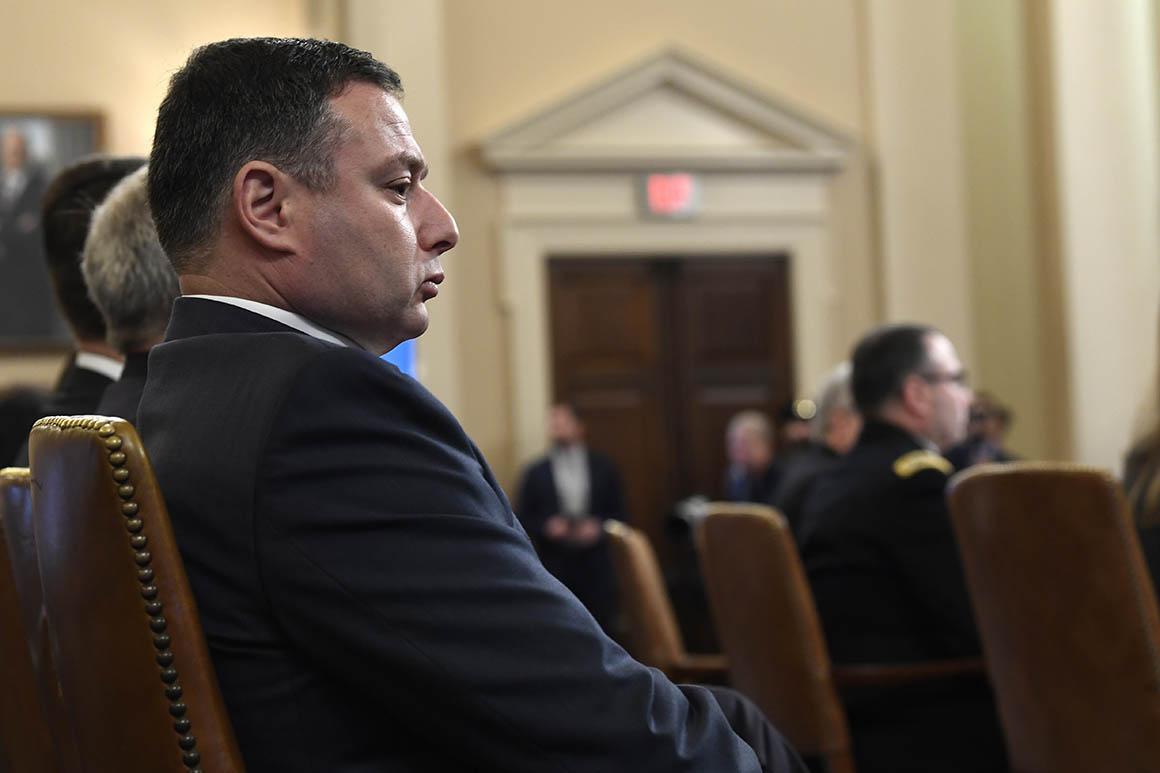 A former senior ethics official and lawyer on the National Security Council has filed a complaint with a Pentagon watchdog raising concerns that he was retaliated against for reporting that the national security adviser and his chief of staff “committed several ethics and legal compliance violations” late last year and into 2020.

Lt. Col. Yevgeny Vindman, the twin brother of impeachment witness Lt. Col. Alexander Vindman (Ret.), filed the complaint on August 18, according to his attorneys and a letter leading Democrats on four House committees sent to the Defense Department’s acting inspector general on Wednesday. (Alexander Vindman retired from the military last month following what he described as “a campaign of bullying, intimidation, and retaliation.”)

The letter — signed by House Oversight chairwoman Carolyn Maloney, House Intelligence Committee chairman Adam Schiff, Armed Services chairman Adam Smith, and Subcommittee on National Security chairman Stephen Lynch — called for the acting inspector general, Sean O’Donnell, to launch an investigation into Yevgeny Vindman’s claims. It quotes from a memo Vindman sent to the Pentagon’s general counsel on March 6, weeks after he and his brother were transferred out early from the NSC.

“During the fall of 2019 to February 2020, I became aware of legal compliance and ethics violations involving Robert O’Brien, Assistant to the President and National Security Advisor (NSA) and Alex Gray, Deputy Assistant to the President (DAP) and National Security Council (NSC) Chief of Staff (CoS),” the memo reads, according to the Democrats’ letter. “Specifically, there were allegations of sexism, violations of standards of ethical conduct for employees and violations of the Anti-Deficiency Act.”

The letter, which requests a response from O’Donnell by Sept. 1, did not include the full inspector general complaint because the complaint names specific women who made the allegations and the panels want to keep their identities private, two people familiar with the matter said.

But Vindman’s attorneys, Mark Zaid, Andrew Bakaj, Brad Moss and Eugene Fidell, confirmed that he filed, through counsel, a whistleblower reprisal complaint with O’Donnell’s office. “Lt. Col. Vindman’s complaint states that senior White House officials, to include the president, retaliated against him for performing his duty as an attorney and Soldier,” the lawyers’ statement reads.

In his March memo, Vindman noted that the alleged violations fell within his purview because he was the senior ethics official on the NSC and its deputy legal adviser. He notified his supervisors both at the NSC and the White House Counsel’s office about his concerns, he said.

“To my knowledge no action was taken,” he wrote in the memo, as relayed in the Democrats’ letter.

Vindman’s later complaint to the DoD inspector general outlined specific concerns about O’Brien’s use of official government resources for personal activities — including a speech at Brigham Young University, where his daughter is a student; allegations of “demeaning and demoralizing sexist behavior against … female NSC professionals” by O’Brien and Gray, his chief of staff; the pair’s alleged misuse of NSC staff’s official time for personal errands like making haircut appointments and dinner arrangements; and O’Brien’s alleged circumvention of government ethics standards.

The NSC did not immediately return a request for comment.

READ:  States defer to health providers on who gets first vaccines

While still at the NSC, Vindman registered his concerns over the behavior with his superiors, the Democrats said, citing his memo and complaint. They also said he raised concerns three separate times with the NSC’s top lawyer, John Eisenberg, about Trump’s conversation with Ukrainian President Volodymyr Zelensky last July, in which Trump asked Zelensky to investigate the Bidens.

In response, according to Vindman, the White House appeared to take “a series of personnel actions” against him, including “reducing his portfolio of responsibilities, excluding him from important NSC meetings and official events, removing him from his NSC position and escorting him and his brother off the White House grounds, and filing a derogatory performance review.”

The letter quotes from two officer evaluation reviews written by Eisenberg about Yevgeny Vindman in July 2019 and April 2020. The first called him “a top 1% military attorney and officer and the best LTC with whom I have ever worked.” The second, following Vindman’s complaints about O’Brien and Trump’s phone call with the Ukrainian president that ultimately led to his impeachment, described Vindman’s performance as “substandard” and said he exhibited “increasingly poor judgment.”

“Actions were improperly taken against [Vindman] for his protected disclosures involving matters that ultimately led to the president’s impeachment as well as disclosures of misconduct by other current senior members of the president’s national security team,” Vindman’s lawyers said in their statement.