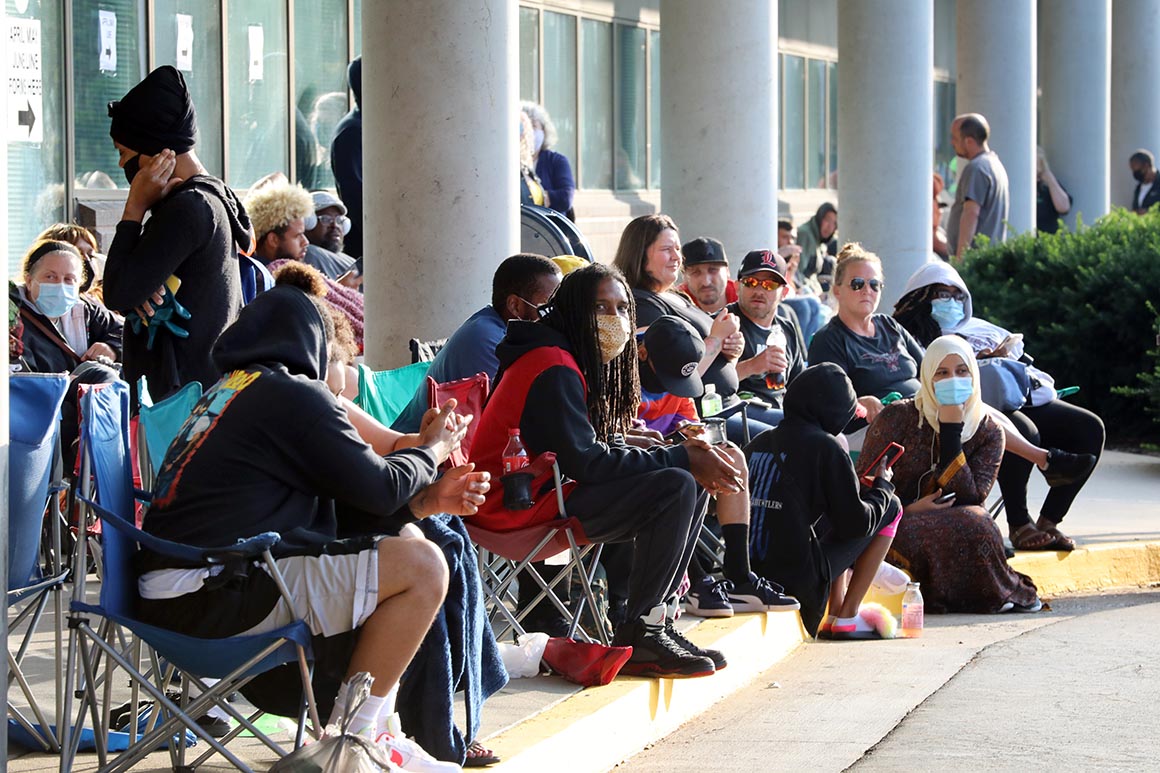 Thursday's jobs report will likely look great on paper: Millions of jobs added in June as states reopened. But those numbers are a deceiving bump — with the resurgence of the virus and a fresh wave of shutdowns, the reality of the job market is likely far bleaker.

With more than 40 percent of the country now reversing or pausing its plans to reopen, the already struggling U.S. economy has begun to show signs of another shock. Real-time measurements ranging from job postings to restaurant reservations and small-business operations are suggesting a renewed decline in economic activity. And the number of households expecting to lose income over the next month increased in the most recent week, according to a U.S. Census Bureau survey released on Wednesday — the first rise recorded since the agency began conducting weekly household surveys two months ago.

But because of a lag in the federal data, the employment numbers the Department of Labor will release Thursday morning — the results of a survey conducted through the middle of June — will fail to capture the latest round of devastation, economists say. The numbers therefore should be taken “with a whole stockpile of salt,” said Diane Swonk, the chief economist at Grant Thornton.

“It’s all backwards-looking because of what we’ve experienced since then,” Swonk said. “Fear is its own tax, and the pullback was pretty dramatic.”

The official unemployment rate came in at 13.3 percent in May, a surprise drop from April’s high of 14.7 percent that suggested the economy was beginning to recover, and employees were getting called back to work. The monthly unemployment rate also does not include those who haven’t been actively searching for work over the past four weeks, potentially leaving out those who were waiting for new job opportunities as states reopened.

Still, while the economy has improved since the spring, there have been some signs that the pace of growth may be slowing. Weekly unemployment claims have steadily dropped from their peak of 6.8 million in late March but plateaued at around 1.5 million for most of June — still more than double the previous highest level on record. The number of Americans receiving unemployment benefits has also held relatively steady at roughly 20 million in the most recent data.

“There’s no shortage of concerns around what we're seeing in the jobless claims data and ... of course the fact that the improvement in the data has seemed to have slowed somewhat,” said Mark Hamrick, senior economic analyst at Bankrate.com. “And then there is a risk that new restrictions will cause further job loss.”


Private companies have also been collecting data suggesting a slowdown. The reservation website OpenTable has seen the number of restaurant diners fall in the past few days after weeks of steady improvement. Homebase, a company that collects data from more than 60,000 businesses and 1 million hourly employees, has recorded Main Street business activity flattening in late June and even starting to drop in the past week, particularly in states like Arizona, Florida and Texas where coronavirus cases are surging.

And the online jobs marketplace ZipRecruiter — which had seen the number of job openings posted rise more than 14 percent in May compared to the month before — recorded a 7 percent drop in June, dragged down by particularly weak numbers in just the past few days, said Julia Pollak, a labor economist with the company.

“That likely reflects increasing awareness that we haven’t got this virus under control yet, that businesses may have to re-close,” Pollak said. “I think that is a very upsetting and worrying thing.”

The new numbers are coming out as the Senate is gearing up for negotiations over another coronavirus relief package, including whether to extend the extra $600 per week in jobless benefits that are currently due to run out at the end of July. A bipartisan group of lawmakers is also hammering out the details of additional business rescue programs that would offer forgivable loans to employers who are able to maintain a percentage of their payroll — similar to the rules of the Paycheck Protection Program.

Senate Majority Leader Mitch McConnell signaled this week that Republicans are willing to move quickly on some sort of package, saying the chamber will focus on talks when it returns from its two-week July 4 recess. Another month of positive jobs numbers could alleviate pressure on Republicans to continue some of the more heavily debated aspects of that program, including the $600 sweetener.

Many GOP lawmakers argue that the benefit is so high that it provides a disincentive to return to work. Republicans have generally been taking a “wait-and-see” approach to the potential next round of stimulus funding, while House Democrats have already moved to extend it until January.

Other aspects of the stimulus, including the PPP, are likely keeping the economy as strong as it is, and economists warn it could quickly fall if and when benefits expire. Tom Gimbel, founder and CEO of the national staffing and recruiting firm LaSalle Network, said he doesn’t expect the unemployment figure to be an accurate reading of the economic situation until September’s or October’s report, when the small businesses relief program created under the CARES Act runs out.

“I think the numbers are wholly inaccurate as to where the state of the economy is,” Gimbel said, adding that when the government’s forgivable loan Paycheck Protection Program ends more people will be laid off. The program stopped accepting new applications this week but Congress is moving to keep it open until Aug. 8.

Not all of the real-time data is showing a slowdown. Daniel Zhao, a senior economist with Glassdoor, has a rosier outlook, predicting that 4.9 million new jobs were created in June. But he also warns that job openings grew the fastest last month in the Midwest and South — areas that were some of the first to reopen, and that have also seen Covid-19 infections swelling in recent days.

READ:  Congress finally gets first chance for answers about the Jan. 6 insurrection

“The jobs report is often thought of as a look in the rearview mirror, because the reference week is now two or three weeks past, and we’ve seen this surge in Covid-19 cases across the country,” he said.


“There is this open question about how it’s actually going to take into account the most recent information,” he added, suggesting the effect of the reinstated business closures could take a week or two to trickle down into the economic data.

There’s also the question of a misclassification issue that the Bureau of Labor Statistics has acknowledged contributes to an understatement of the actual level of joblessness in the country. That’s because large numbers of people have been classifying themselves as employed but absent from work in its monthly survey, which can artificially suppress the unemployment rate.

BLS says it has “taken more steps to correct the problem” and implemented more training for interviewers ahead of the June report, but the problem could still persist.

Regardless of what the numbers on Thursday show, many economists and lawmakers are emphasizing that the new spike in coronavirus cases alone spells more trouble for the economy, which they say will need further help.

“The jobs crisis won’t be over until the public health crisis is over,” House Majority Whip Jim Clyburn (D-S.C.) said on a press call Wednesday. “This administration is burying its head in the sand and pretending that the virus is going to miraculously disappear. It won’t. And that approach will only prolong our nation’s crisis.”