In cities across the country, protests turned violent as local authorities called for calm.


President Donald Trump reacted to the protests and incidents of vandalism and violence ripping through several American cities by threatening to invoke the power of the federal government and the military, tossing the equivalent of a lighted match into a national uproar over an African-American man's death at the hands of police.

"Crossing State lines to incite violence is a FEDERAL CRIME!" Trump tweeted on Saturday afternoon. "Liberal Governors and Mayors must get MUCH tougher or the Federal Government will step in and do what has to be done, and that includes using the unlimited power of our Military and many arrests."

Mayors have been sharply critical of Trump's leadership amid the burgeoning crisis that has now spread to some two dozen cities, accusing him of deepening America's divides. "There’s been an uptick in tension and hatred and division since [Trump] came along,” New York Mayor Bill de Blasio said in a news conference on Saturday. “It’s just a fact.”

Trump's remark came minutes after Attorney General William Barr warned that those who cross state lines for the purpose of inciting violence could face federal prosecution.

In comments to reporters as he departed the White House to witness the launch of the SpaceX mission in Florida, Trump implied that the chaos in Minneapolis, New York, Atlanta and other cities was driven by leftist agitators bent on stirring up trouble. "Antifa, it's a lot of radical left, bad people," he said, though neither the president nor Barr presented evidence of who was behind the burning and looting of buildings and retail outlets.

Earlier, on Saturday morning, the president weighed in on unrest closer to home: He warned protesters who forced the White House into partial lockdown on Friday evening would face "vicious dogs" and "ominous weapons" if they breached the building's perimeter, praised the actions of the Secret Service and appeared to call his supporters to defy authorities by staging a counterprotest.

"Great job last night at the White House by the U.S. @SecretService. They were not only totally professional, but very cool. I was inside, watched every move, and couldn’t have felt more safe. They let the “protesters” scream & rant as much as they wanted, but whenever someone.... ...got too frisky or out of line, they would quickly come down on them, hard - didn’t know what hit them," Trump tweeted.

"Big crowd, professionally organized, but nobody came close to breaching the fence. If they had they would.... ....have been greeted with the most vicious dogs, and most ominous weapons, I have ever seen. That’s when people would have been really badly hurt, at least. Many Secret Service agents just waiting for action," he added.

The president also appeared to call for a counter protest, tweeting: "Tonight, I understand, is MAGA NIGHT AT THE WHITE HOUSE???"

The Secret Service partially sealed off the White House grounds Friday amid nationwide protests following the death of an African-American man, George Floyd, who was killed after a Minneapolis police officer pinned Floyd's neck with his knee. One of the officers involve in the arrest has been arrested and charged with murder.

Trump had previously called the Minneapolis protesters "thugs" and threatened to unleash gunfire on them, fueling outrage among critics who said he was inflaming the situation instead of taking steps to defuse it.

Asked by reporters later Saturday if he was stoking racial animus by calling for a counterprotest, Trump said, "No, not at all. MAGA is make America great again. These are people that love our country. I have no idea if they're going to be here. I was just asking. ... By the way, they love African-American people. They love black people."

The National Guard was activated in Washington, Atlanta and Minneapolis, with Minnesota Gov. Tim Walz moving on Saturday to activate another 1,000 Guard soldiers, adding he was considering federal help. Georgia Gov. Brian Kemp on Saturday ordered the deployment of up to 500 members of the Guard to Atlanta.

Saturday's protests were largely peaceful during the day but violence broke out in cities across America overnight despite curfews issued in many. In Minneapolis, police in riot gear put on a massive show of force to confront growing throngs of protesters.

Protesters in Washington swarmed the White House and the downtown area for a second night but a counter rally did not materialize.

In New York City, violence erupted on Saturday night as a police vehicle was set ablaze and video captured another vehicle plowing through protesters who were throwing cones, garbage bags and water bottles at the cops.

De Blasio blamed protesters he said came to the city from out of town to incite violence against police officers.

“Anyone who is a peaceful protestor, it’s time to go home. The point’s been made,” de Blasio said during a brief television interview Saturday night. He defended the officers' response though said he regretted the incident had escalated to the point of violence.

“I’m not going to blame officers who were trying to deal with an absolutely impossible situation,” de Blasio said at a subsequent press conference in Brooklyn Saturday night. “I wish the officers had found a different approach but let’s begin at the beginning — the protesters in that video did the wrong thing to surround that police car, period.”

Dozens of cities have seen protests despite ongoing stay-at-home orders amid the coronavirus pandemic. D.C. Mayor Muriel Bowser announced the partial lifting of lockdown measures Wednesday, though gatherings of more than 10 remain prohibited.

Trump also verbally sparred with Bowser, accusing her of doing a "bad" job and "always looking for money & help." Bowser, he tweeted, "wouldn’t let the D.C. Police get involved. 'Not their job.' Nice!"

Bowser forcefully rebutted the accusation, replying in a tweetstorm of her own that began: "My police department will always protect DC and all who are in it whether I agree with them (such as those exercising their First Amendment Right) or those I don’t (namely, @realDonaldTrump)..."

Hundreds of protesters set out from U St. toward downtown Washington, D.C., on Friday afternoon. Videos and news reports showed protesters chanting their outrage at Floyd's death. Protesters had reached Lafayette Park, which is to the north of the White House grounds, by Friday evening.

By around 11:30 p.m., a group of protesters had returned to the White House and pushed back against barricades set up by police and Secret Service officers. Protesters were barred from approaching the White House at Lafayette Park. The two sides stood in a tense stand off, in contrast to the violent altercations with police that have occurred in other cities.

In a statement released Saturday, the USSS said its officers had made 6 arrests in and around Lafayette Park and along Pennsylvania Ave. near the White House, adding that some demonstrators hurled bricks, bottles and fireworks and attempted to knock over security barriers but none breached the White House perimeter. 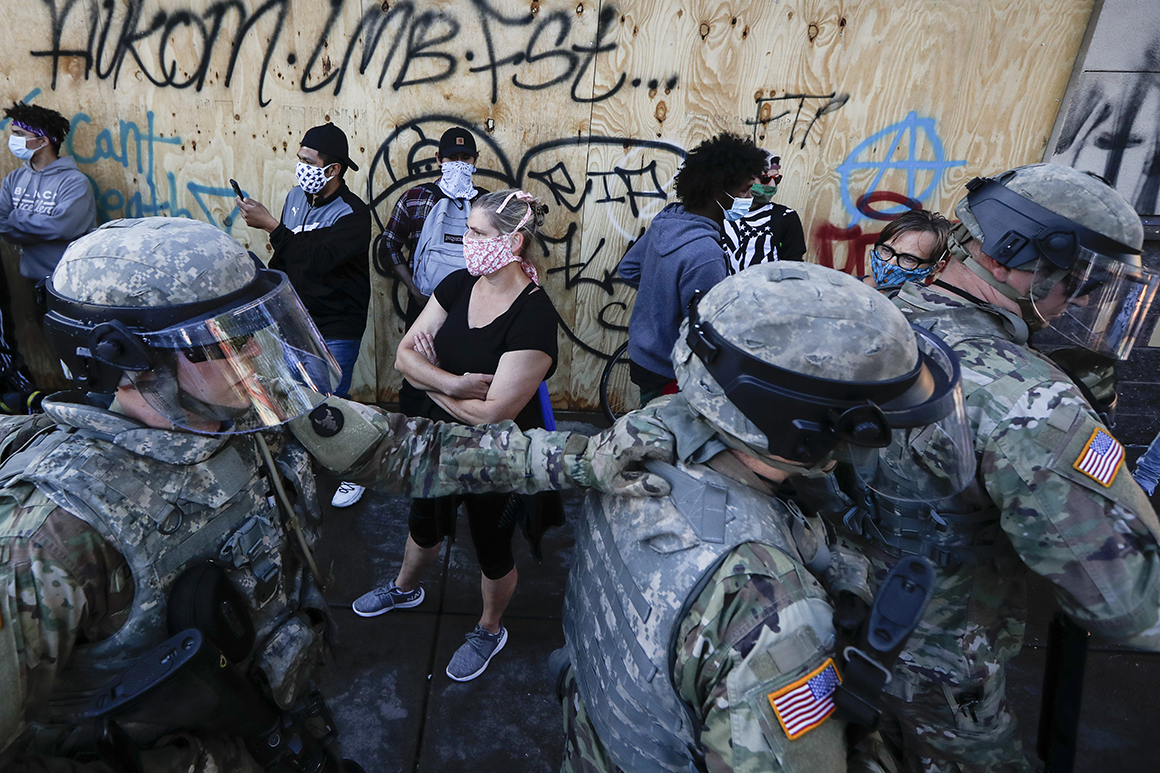 The statement noted that Metropolitan Police officers were on scene alongside the U.S. Park Police, contradicting Trump tweet's criticizing Bowser for a lack of local police involvement.

Reporters who were at the White House said they were not able to leave the complex early Friday evening, with the doors to the briefing room locked. Secret Service officials told reporters the situation outside was not contained enough to open the doors. A White House official told POLITICO those in the complex could leave via the south entrance.

Reporters were allowed to leave the building around 8:30 p.m.

Reporters had gathered at the White House on Friday afternoon for a briefing by Trump announcing the United States' withdrawal from the World Health Organization. The president declined to address the upheaval in Minnesota and did not take questions.

Trump later remarked on the nationwide unrest during a White House event, saying that it was important to “protect the rights for peaceful protesters.”

“We can’t allow a situation like what happened in Minneapolis to descend further into lawless anarchy and chaos,” he said. “I understand the hurt. I understand the pain. People have really been through a lot.”

“The family of George is entitled to justice, and the people of Minnesota are entitled to live in safety,” Trump added.

Anita Kumar and Daniel Lippman contributed to this report.