In inviting the spotlight to shine on Washington, Trump is sure to give media attention to local officials eager to undercut the exact narrative he’s trying to sell. 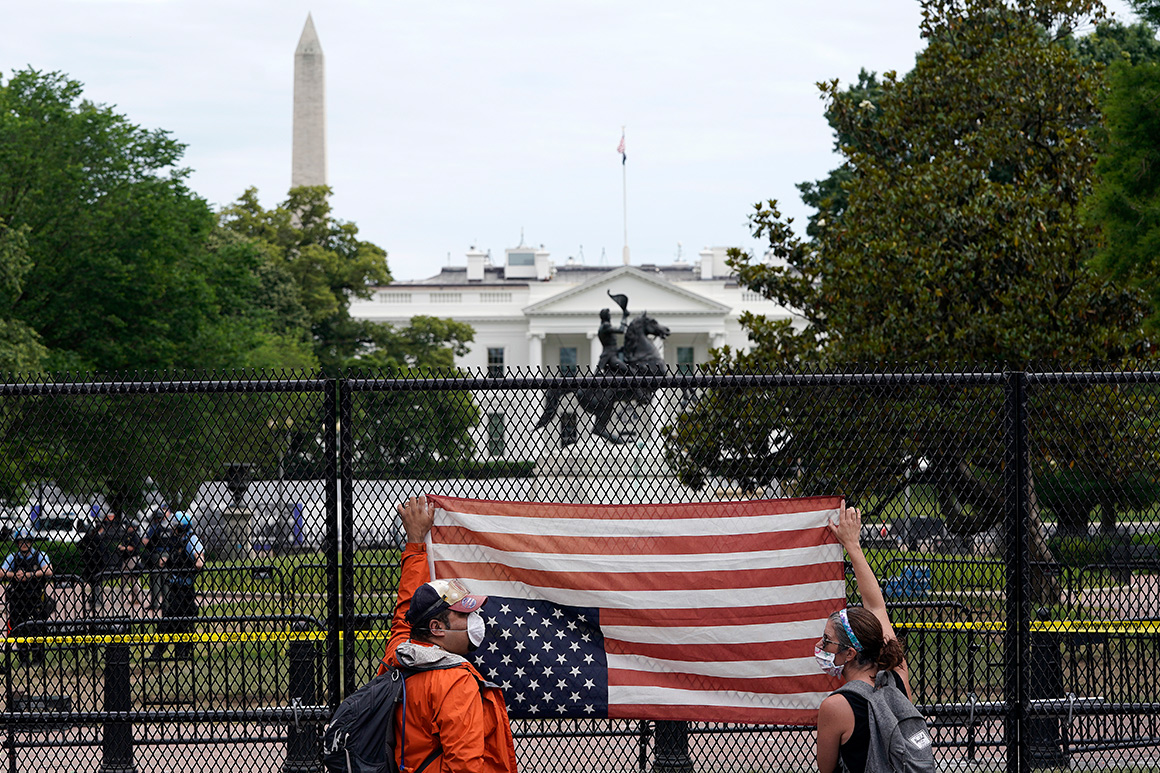 President Donald Trump never got his wish to stage a July 4th military march down Pennsylvania Avenue in the heart of downtown Washington, D.C. But nights of street protests in the nation’s capital in reaction to the killing of George Floyd by Minneapolis police have provided Trump another opportunity to use the District of Columbia as the backdrop for his reality-TV approach to governing.

As protesters peacefully gathered Monday evening in front of St. John’s Episcopal Church, steps from Lafayette Square in view of the White House, Trump ordered federal troops to clear out protesters with tear gas and rubber bullets so he could stage a photo op. He stood in front of the historic church holding a bible aloft, leading Michael Curry, the bishop who presides over the Episcopal denomination, to accuse him of using “a church building and the Holy Bible for partisan political purposes.”

He meant it as criticism, but that was precisely President Trump’s goal: to use the nation’s capital and its landmarks as a setting for the political drama of the day, with him as the main character. The nation’s capital, especially in a moment of chaos, provides the ideal foil for his supporters, who see the District as the home of the insiders and “deep state” bureaucrats they elected Trump to defeat.

But using D.C. as a stage might not end well for this president. In inviting the spotlight to shine on Washington, Trump is also elevating the profiles of local politicians who’ve already waded into the fight against him, and are all too eager to use the attention to finish it. By highlighting the president’s management of the crisis, they may very well undercut the exact narrative the president tried to sell in the St. John’s Church stunt: That he is in control.

Even as the president admonished state and local officials on Monday to “dominate” the protesters, Washington D.C. Attorney General Karl Racine told Politico he would “not seek to prosecute” demonstrators arrested for violating the District’s 7:00 PM curfew, though he would pursue cases about “assaultive conduct and destruction of property.”

“The president has sought to use the District of Columbia as a prop to show how to stomp out lawful protest, using the full authority of the federal government,” said Racine. “Outrageous.”

Racine has spent much of the last few years bringing lawsuits against Trump, accusing the president of corruptly benefitting from profits derived from the Trump Hotel in downtown Washington, a few blocks from the White House. Joining with Maryland Attorney General Brian Frosh, Racine sued Trump for violating the Constitution’s Emoluments Clause — a case, which, after pending in the courts for months, the Fourth Circuit Court of Appeals recently ruled could go forward. It’s likely headed to the Supreme Court. “We look forward to pressing ahead,” Racine said.

Nor can the president expect any support from D.C. Police Chief Peter Newsham, who has spent more than three decades policing in D.C. He’s been totally in line with Bowser, and he’s also built strong working relationships with federal law enforcement agencies like the FBI, DEA, Park Police and Secret Service — D.C.’s “federal partners” in law enforcement. And while Trump and U.S. Attorney General William Barr have begun negotiating with District officials over federalizing local police and arming National Guard troops with long rifles, Newsham has objected to both proposals.

Trump, of course, has depicted his tear-gassing of the White House protesters and general handling of the crisis as a victory. “D.C. had no problems last night,” he tweeted Tuesday morning. “Many arrests. Great job done by all. Overwhelming force. Domination.” In fact, skirmishes between police and protesters continued all night and into Tuesday. “The city is a war zone,” said Jessica Fonzo, a Johns Hopkins professor whose home at 15th and Swann Streets, N.W., was the scene of conflicts through the night.

Outrageous or not, the president could have the authority under D.C. law to commandeer the local police. He threatened on Monday to deploy the military to put down protests in cities across the country. But in the District, the president can invoke a never-used “Emergency control of police”: Since the District is a federal enclave, under control of Congress and the White House, the law states the president may “direct the Mayor” to provide “services of the Metropolitan police force for federal purposes.”

AG Racine conferred with Bowser Monday on how to respond if Trump invokes the law and advised her it gave the president “limited” authority. As of Tuesday, federal officials had floated the idea of invoking the law, but Trump had not made the call.

For Racine, that’s a line in the sand. “I would regard that as an affront to even our limited home rule and the safety of the District of Columbia,” Bowser told reporters.

If Trump were to call in military troops to quell protests in D.C., it would not be the first time a president had taken such an action. In April 1968, after the assassination of Martin Luther King, Jr., President Lyndon Johnson called in soldiers to quiet rioting, looting and arson that burned miles of D.C. streets, stopping just 10 blocks from the White House. But LBJ brought in troops reluctantly, in part because he cared for the District. He had worked in the city for decades as a congressman and senator before becoming president, and as president, he put the District on course for political independence under Home Rule, which he considered part of his drive for civil rights.

Before Trump came to town, most presidents had developed some respect and affinity for the city around 1600 Pennsylvania Avenue. Richard Nixon dined out at local restaurants, presided over a massive redevelopment of Pennsylvania Avenue, and famously made an impromptu late-night visit to the Lincoln Memorial to meet protesters who opposed the Vietnam War. Jimmy Carter sent daughter, Amy, to D.C. public schools. Laura Bush took her advocacy of literacy by reading books to D.C. students. The Obamas were comfortable in and around the District, dining at swanky restaurants, shopping at local bookstores, and taking classes at Soul Cycle.

Donald J. Trump has never attempted to establish any relationship with the nation’s capital. In his first three years, he has never visited a D.C. neighborhood establishment. He ventures to his Trump Hotel to dine with prominent supporters, and to Capitol Hill to meet with House or Senate members. The lack of any relationship, personal or political, with the District’s residents exacerbates the current conflict over protesting and policing.

“The lesson so far is you cannot rely on the federal government under President Trump to treat people with the respect they deserve,” Racine said. “He calls for dominance when our current situation calls for even more restraint between people who are protesting and the people protecting our city.”

Should President Trump become desperate for another show of personal force, his next act with D.C. as backdrop could be essentially deputizing the Metropolitan Police Department or calling in federal troops. If that happens, he may well get his military march down Pennsylvania Avenue — if for no other reason than to inspect his troops.