At packed-in Pennsylvania campaign event, the president also mocked the Democratic nominee for wearing a mask. 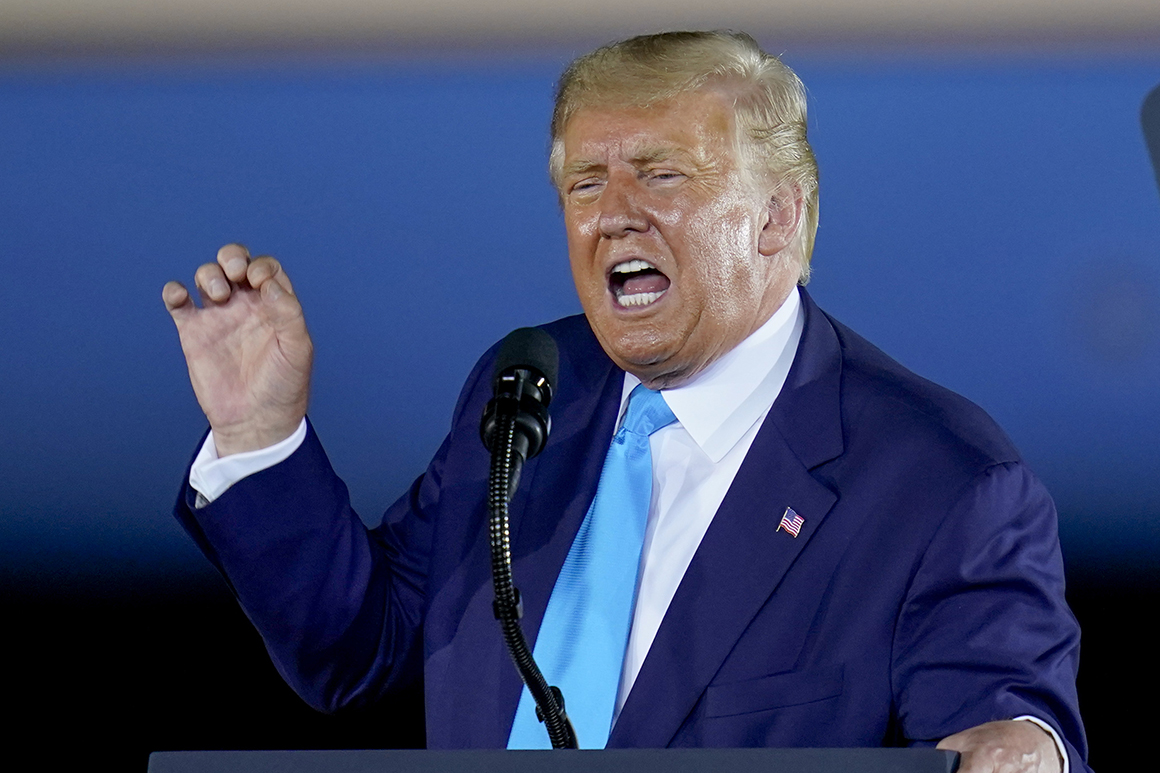 President Donald Trump on Thursday parlayed rumors over his health into another hit on Joe Biden, spinning a highly scrutinized visit to Walter Reed hospital last year into an attack on his Democratic presidential rival during a campaign event.

Speaking at an airport hangar to a packed-in crowd in Latrobe, Pa., Trump claimed journalists had spread rumors of the president having "mini-strokes" because "they want to try and get me to be on Biden's physical level."

It was an echo of Trump's repeated attacks on Biden's health and mental capability throughout the campaign. Trump's lengthy defense of his visit to Walter Reed was also reminiscent of his 17-minute explanation at a Tulsa rally in June of his halting descent down a ramp at a West Point graduation ceremony.

Trump's allusion to his hospital visit wasn't the only attack he leveled on Biden's acuity. He also mocked the Democratic nominee for wearing a mask during campaign events and observing social distancing measures.

"Have you ever seen a man who likes a mask as much as him?" Trump said. "It gives him a feeling of security. If I were a psychiatrist, I'd say this guy has got some big issues."

Photos of the event showed supporters standing shoulder to shoulder with few masks in the crowd. Trump exited Air Force One at the hangar and spoke for about 90 minutes to an enthusiastic crowd with the presidential plane in the background.

Trump's remarks defending his health came the same week he accused political commentators and journalists of spreading rumors that his unscheduled visit last November to Walter Reed National Military Medical Center was due to "mini strokes." The White House has said it was for a routine physical exam. Trump on Thursday blamed the controversy on White House doctors not announcing the visit beforehand.

READ:  The queen’s rep in Canada calls it quits after probe into toxic workplace

New York Times reporter Michael Schmidt wrote in a book excerpt released this week that during the visit Vice President Mike Pence was put on standby "to take over the powers of the presidency temporarily if Trump had to undergo a procedure that would have required him to be anesthetized.” Trump has denied that Pence was ever put on standby.

Trump's attacks on Biden weren't limited to his health, with the president saying Biden was beholden to "radical left Democrats" amid nationwide protests against systemic racism and police brutality.

"For the entire summer, Biden was silent as far left rioters viciously attacked law enforcement in Democrat-run cities. They burned down businesses, terrorized civilians, and just recently walked through the streets chanting death to America," Trump said. "Biden's plan is to appease the domestic terrorists, and my plan is to arrest them and prosecute them."

Biden has denounced violence in protests and has frequently voiced his support for law enforcement.

Trump spoke only hours after Biden visited Kenosha, Wis., to meet with members of the community and the family of Jacob Blake, an African American man who was shot several times by a white police officer. Biden's visit came two days after Trump traveled to Kenosha to reiterate his message of law and order amid days of unrest following Blake's shooting.

Trump also went after Biden shortly before leaving for Pennsylvania for shaking someone's hand during his visit to Kenosha — a now-taboo act in the age of the coronavirus. Biden's campaign said the man was a campaign staffer, according to a pool report.

READ:  Biden declares Iran will never get a nuclear weapon ‘on my watch’

"Joe Hiden’ gets off his airplane, grabs and shakes a rather stunned man’s hand (like in the old days), then touches his (Joe’s) face and mask with the same hand. No crowd, no enthusiasm for Joe today. Law & Order!" Trump tweeted.

During his Latrobe event, Trump also called on the audience to try showing up to the polls after sending in mail-in ballots; an echo of comments from Wednesday when he encouraged North Carolina voters to cast their ballots twice amid a broader campaign against mail-in voting.

"Sign your mail in ballot, OK, you sign it and send it in and then you have to follow it. And if on Election Day or early voting, that is not tabulated and counted, you go vote. And then if for some reason after that it comes in, they’re not going to be able to tabulate it because you will have voted," Trump said. "But you have to make sure your vote counts because the only way they're going to beat us is by doing that kind of stuff. I'm trying to be nice."

Voting twice is illegal, even if to test a backstop measure, and his suggestion in North Carolina was widely panned by election officials.

Toward the end of his appearance, Trump mocked Nancy Pelosi for a viral video of the House Speaker visiting a San Francisco hair salon in apparent violation of the city's coronavirus orders.

Pelosi said she was subjected to a "set-up" by the salon, which had assured her that they could accommodate one customer at a time.