The president had resoundingly rejected Democrats’ proposals as part of his ongoing attack on mail-based voting. 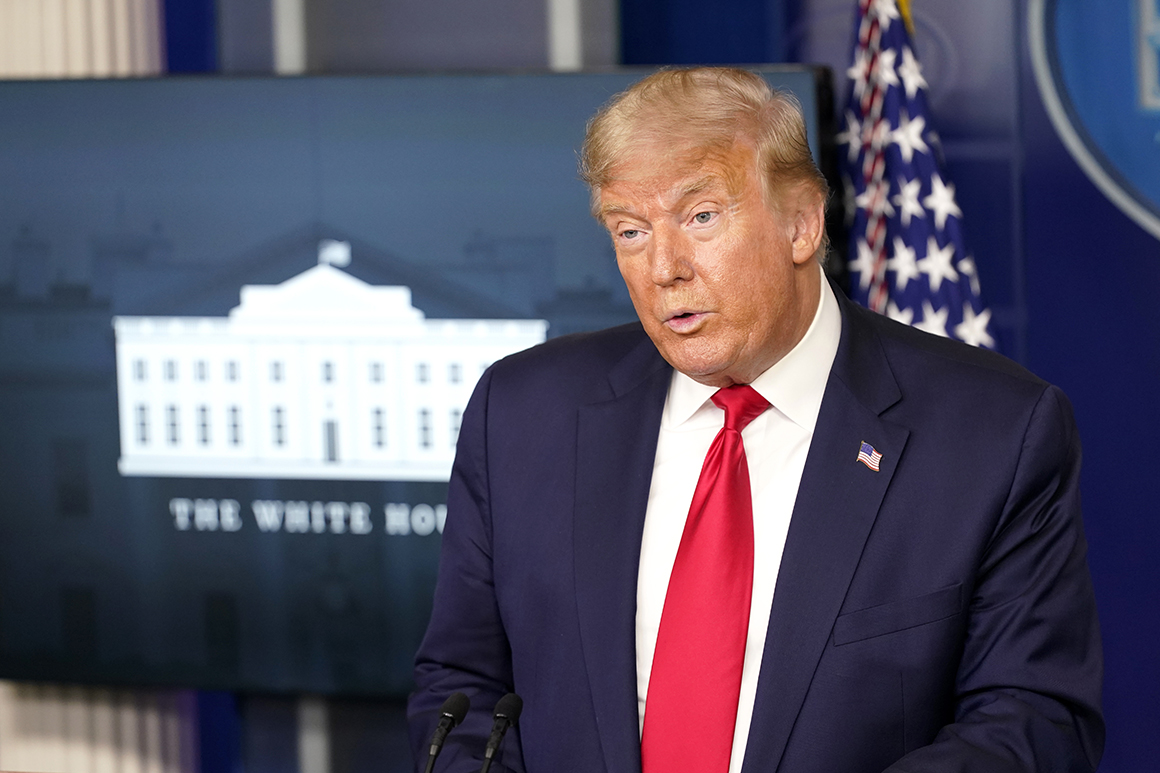 President Donald Trump suggested Friday that he would be open to approving additional funding for the U.S. Postal Service if congressional Democrats agree to his legislative agenda on combating the coronavirus pandemic and its accompanying economic crisis.

During a White House news briefing, Fox News' John Roberts asked Trump whether he would accept an additional $25 billion for the Postal Service and over $3 billion that could be used for mailing ballots if Congress were to approve his administration's coronavirus relief proposals.

Trump responded: "Sure, if they give us what we want."

The figures Roberts cited came from House Democrats' opening offer for coronavirus relief, legislation passed in May which stalled in the Republican-held Senate. The bill included $3.6 billion for "election resilience grants," which could be used for mailing ballots and registration forms to voters.

Trump had resoundingly rejected those proposals as part of his ongoing attack on mail-based voting. The president conceded in an interview with Fox Business Network's Maria Bartiromo on Thursday that blocking supplemental funding would leave the Postal Service unable to handle the expected volume of mail-in ballots, a maneuver Trump's opponents quickly characterized as an attempt at voter suppression.

But the president's remark Friday hinted at a change in posture, hinging on approval of his administration's relief proposals. Shortly before the Friday briefing, Trump had tweeted that he was pushing Treasury Secretary Steven Mnuchin to advance direct payments to cushion the financial blow of the coronavirus pandemic.

Trump tweeted: "DEMOCRATS ARE HOLDING THIS UP!"

The president has repeatedly characterized mail-in balloting as a gateway to voter fraud, even as fears spread of coronavirus at in-person polling stations.

Despite his claims, there is no evidence of the type of widespread voter fraud that Trump has alleged. There is some additional risk of voter fraud with mail-in voting, experts have suggested, but that risk can be mitigated by election security measures.

Trump's appointed postmaster general, Louis DeJoy, has also faced criticism this month for substantially adjusting postal services under the guise of cost reduction. Postal workers have complained that the measures severely hamper their ability to deliver the mail on time, potentially hamstringing the service just as an unprecedented number of voters are expected to request and submit mail-in ballots.

"The President, his cronies and Republicans in Congress continue to wage their all-out assault on the Postal Service and its role in ensuring the integrity of the 2020 election," House Speaker Nancy Pelosi and Senate Minority Leader Chuck Schumer said in a statement Friday. "Yesterday, the President threatened to further starve the Postal Service of the funds that it needs to deliver the absentee ballots necessary to ensure that people do not have to choose between their health and their vote this fall — threats that he doubled down on last night."

Pelosi and Schumer noted in their statement that the president and first lady themselves had requested to vote absentee this week.

"Democrats call on the President to immediately cease his assault on the Postal Service, make clear that he will allow the 2020 election to proceed without his sabotage tactics and enable the American people the same opportunity he and the First Lady requested this week to vote by absentee ballot," Pelosi and Schumer said.