OSHA’s tiny fines amount to a “slap on the wrist,” advocates say. 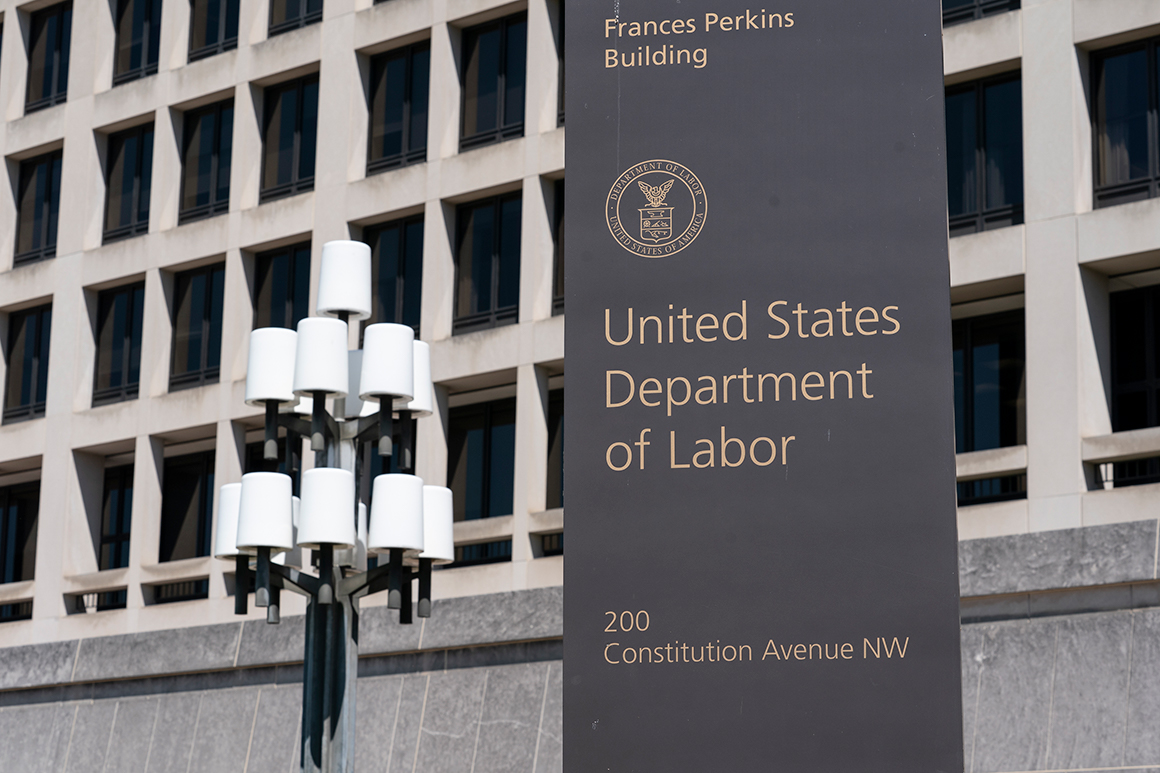 The federal agency charged with workplace safety has done little to punish companies when their workers get sick or even die from the coronavirus, as major employers and President Donald Trump’s political appointees have pushed for a much more lenient approach to handling risks like Covid-19 on the job than previous administrations.

The Occupational Safety and Health Administration has received 10,485 complaints and referrals about Covid-19 risks at workplaces and closed 8,702 of them during the pandemic. But in these cases -- some involving companies worth millions -- the agency hasn't proposed a single penalty greater than $30,000 for coronavirus-related risks.

With U.S. coronavirus deaths climbing above 200,000, Democrats and labor groups have been hammering the federal government to step up its enforcement, pushing for stricter safety rules and tougher penalties for bad actors.

But Trump's regulators are taking a more relaxed approach than even previous Republican administrations when using their special enforcement powers to punish companies who expose workers to the virus. Republicans and business lobbying groups, including the Chamber of Commerce, have lined up against the establishment of a strict coronavirus standard, arguing that employers need flexibility during the pandemic.

The fines sparked an uproar from worker advocacy groups, one of whom called the penalties a “slap on the wrist” to the giant companies.

“Every enforcement action sends a message,” said Dr. David Michaels, who led OSHA under the Obama administration. “These tiny fines are OSHA sending a message to meat factories across the country that they don't have to worry anymore. . . they can operate as they please no matter how many workers are sick, injured or killed."

The fines levied against the two companies were low partly because the Labor Department, led by former management-side attorney Eugene Scalia, has declined to issue mandatory Covid-19 safety rules that companies must follow to protect employees during the pandemic, instead offering optional guidelines.


Scalia says the agency has all the enforcement power it needs under OSHA’s “general duty clause,” which requires employers to generally maintain a safe workplace “free from hazards" that are likely "to cause death or serious physical harm."

But the agency has only used the general duty clause twice during the crisis when citing employers for not protecting workers from the virus -- when it fined Smithfield and JBS Foods in September.

In some workplaces, like hospitals and nursing homes, OSHA has handed employers a stack of citations during Covid-19 for violating its respirator or protective equipment rules.

However, in industries where such standards are harder to apply -- like meatpacking plants -- the agency is limited to fining employers under the general duty clause, even in cases where workers died.

Management-side attorneys and former Republican OSHA officials say the general duty clause is limited and that it’s difficult legally for the agency to issue citations that rack up thousands of dollars of fines.

“These cases depend on the facts,” said Ed Foulke, who led OSHA under President George W. Bush. “OSHA has to follow the rules . . .penalty amounts are determined by a formula. It's not that they can say, 'Oh we're going to hit this person for $100,000 because we're going to teach them a lesson'.”

“If somebody dies at work, you would want to think that we're going to show in the penalty amounts that this person's death was worth something,” Foulke added. “But that doesn't always happen.”

Democrats have questioned whether politics have played a role in the Trump administration's worker safety efforts during the pandemic.

In a letter to Trump administration health officials last week, four Democrats asked why the Centers for Disease Control and Prevention was "watering down" its recommendations on preventing the spread of Covid-19 at the Smithfield plant in South Dakota by adding phrases like “if feasible" and “if possible.”

The lawmakers requested more explanation from the CDC on how and when "outside parties (such as Smithfield executives) are to be included in the process" of drafting safety recommendations.

The pitfalls of OSHA’s decision to not issue a Covid-19 standard have been put on display the most in the meatpacking industry, where the virus has rapidly spread among factory workers.

At least 63,234 workers have tested positive for Covid-19 and at least 267 have died, according to data compiled by the Food & Environment Reporting Network. The group estimates that at least 865 meatpacking and food processing plants have had confirmed cases of Covid-19.

Labor Department spokesperson Megan Sweeney told POLITICO that it “conducted its investigation and issued its citation in accordance with well-established procedures and legal standards” at Smithfield and JBS and that the fines were “the maximum monetary penalty allowed by Congress.”

But both the Ronald Reagan and Barack Obama administrations took a different approach when using the special enforcement power under the general duty clause, issuing multiple citations against employers that resulted in thousands of dollars in fines.

In 1988, OSHA fined the same Smithfield meatpacking plant in Sioux Falls -- then owned by John Morrell & Co. -- $4.3 million for three willful violations of the general duty clause. The fines were later reduced to $990,000 in a settlement where the company agreed to set up an ergonomics program to help prevent long-term worker injuries.

“It changed the industry,” said Debbie Berkowitz, who worked at the AFL-CIO during the Reagan administration and at OSHA during the Obama years. “Until then the industry had ignored the high rates of debilitating carpal tunnel which could be mitigated.”

Earlier that year, OSHA also fined meatpacking company IBP Inc. under the general duty clause, proposing an initial penalty of $3.1 million. The company later agreed to pay $525,760 as part of a settlement agreement with the agency.

In 2014, the Obama administration cited a Wayne Farms poultry plant for three serious violations of the general duty clause, proposing penalties of $21,000. During that period, OSHA’s maximum penalties for a serious violation were capped at $7,000; they have since been raised to $13,494.

Berkowitz, now with the left-leaning National Employment Law Project, says the cases are an example of what OSHA can do without issuing a specific standard on Covid.

“The administration is totally captive by an incredibly dangerous industry that [is] getting away with doing nothing to protect workers,” she said.

Democrats and former OSHA officials say the worker safety agency could have done more, even with its limited enforcement powers.

OSHA could have decided to levy a separate penalty for every area of the plant where workers were exposed to COVID-19, according to both Berkowitz and Michaels.

In a recent letter to the Trump administration, Sens. Elizabeth Warren and Cory Booker also questioned why OSHA chose to issue a single citation to each company and why the citations were classified as “serious,” as opposed to “willful” which carries a penalty of $134,937.

READ:  If Asians Want Power, We Need to Learn to Demand It

“You have elected to issue the smallest possible fine for these companies’ egregious behavior, sending a message to Smithfield, JBS, and all employers that companies won’t face any real accountability from OSHA for putting workers’ lives at risk from COVID-19,” the senators wrote in the Sept. 22 letter.

OSHA is able to classify safety violations as willful if for example an employer “knows that specific steps must be taken to address a hazard but substitutes his or her judgment,” or is aware that its workplace is violating safety rules but does nothing to address it, according to OSHA’s Field Operations Manual.

Democrats' latest coronavirus relief bill would require OSHA to issue an emergency temporary standard in days. With such a standard -- or mandatory rules that employers must follow to protect their workers from exposure to Covid-19 -- Michaels says “it would have been much easier and quicker to actually issue citations at these facilities.”

But Republicans have been opposed, arguing that employers need room to navigate the rapidly changing health information on Covid-19. Critics of a coronavirus-specific safety standard also point to the Obama administration’s response to the H1N1 outbreak in 2009, saying the agency didn’t issue an emergency standard then.

“We are still learning about this disease and we just don’t know enough information to meet the level necessary and appropriate to construct an adequate emergency temporary standard and a permanent federal regulation,” Rep. Bradley Byrne (R-Ala.), said during a committee hearing on workplace safety in May.

“From SARS in the 2000s during the Bush administration to MERS, H1N1 influenza and Ebola during the Obama administration, OSHA didn’t issue a new standard but, instead, enforced existing standards and issued guidance,” he said.

But there is a major difference in how the Obama and Trump administrations directed their safety inspectors to police workplaces during health crises.

During the H1N1 pandemic, the Obama administration published a lengthy document instructing inspectors to only consider the safety measures taken by an employer as adequate if they were as protective as CDC’s guidelines for the health care industry.

By comparison, when employers aren’t following the CDC guidelines during the Covid-19 outbreak, the Trump administration has instructed its inspectors to “consider whether employees are exposed to a recognized hazard” and “whether there are feasible means to abate that hazard” before issuing a citation.