Advisers almost universally encouraged Trump to not say much this week and urged him not to take questions on Friday after his first public remarks of the week. 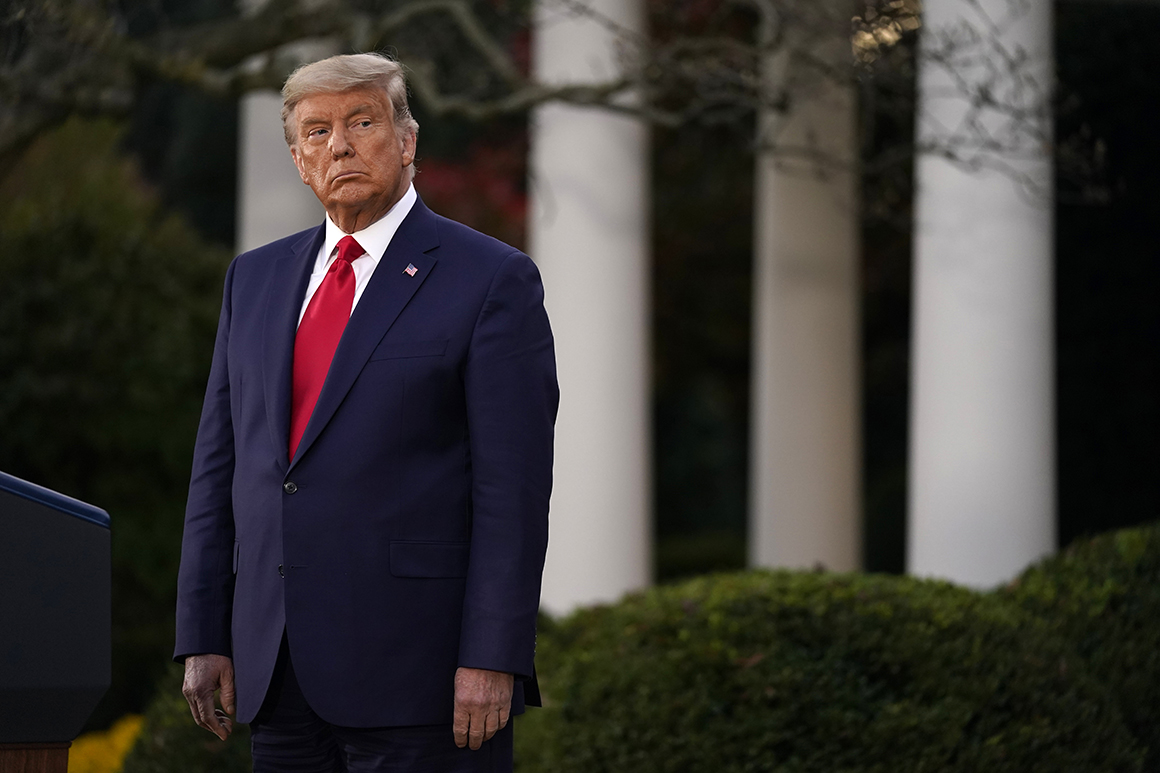 America finally got something it essentially hasn’t had since 2015 — a week without Donald Trump’s voice.

No rally. No sparring with reporters. No unwieldy Fox News interviews. No unscripted moments with world leaders.

Yes, there was his always-active Twitter feed. And there was even one speech late Friday about the progress of a coronavirus vaccine, announced on two-hours’ notice. But even then, the president mostly read from a script before deferring to advisers to carry the bulk of the event. He then succinctly thanked the audience and walked off as journalists shouted questions and staffers applauded.

Before the event, aides had urged Trump to not take questions so the headlines from the event would simply be about the success of a potential vaccine. For once, he listened.

It was a fitting end to a week for Trump where he remained out of view in the White House, shuttling between the residence and the Oval Office, stuck in his own election time warp, stewing over the results and pondering his next steps both for the coming weeks and for a potential presidential run in 2024. Advisers almost universally encouraged him to not say much, fearful of jeopardizing the campaign’s various legal efforts to challenge election results — advice Trump mostly followed, apart from the specious voter fraud claims he has been blasting out on Twitter.

Instead, he spent his days meeting with advisers, calling up allies and acquaintances like journalist Geraldo Rivera and Newsmax owner Chris Ruddy and trying to settle on a strategy for managing his election loss — all while President-elect Joe Biden has started to assemble his staff and Covid infections spike across the country.

“Well, I think he is letting his attorneys do their work,” said Newt Gingrich, the former House speaker and close Trump ally, when asked about the president’s relative silence for the last eight days. “I think he understands, in the end, he has to win an argument about the election with facts on the ground. Unless that happens, he does not have anything to say.”

Few advisers, allies or White House staff believe there is any hope of the Trump campaign reversing the results of the election. Most election lawyers see little merit in the Trump campaign’s lawsuits, which have failed to gain traction or offer serious evidence to back up claims of widespread voter fraud. And on Friday, media outlets finally called Georgia for Biden, giving him 306 Electoral College votes to Trump’s 232.

Still, few Republicans have pushed back against Trump’s unsubstantiated claims of voter fraud, nor have they publicly nudged him to concede to Biden, even though every TV network, The Associated Press and election experts officially called the race six days ago.

Privately, talk has turned to the chances Trump will mount a comeback bid in 2024, a prospect that would ensure he remains the preeminent figure in the GOP while simultaneously looming over Biden’s presidency.

“He’ll be the shadow president for 2 1/2 years until he starts running again,” said Bryan Lanza, a staffer from Trump’s 2016 campaign.

And when the Covid vaccine finally does become available, aides and advisers expect Trump to take full credit for an initiative pushed by his administration — even though Trump downplayed the virus for months, has mocked and cast doubt on mask wearing, and pushed schools and the economy to reopen without a national strategy.

READ:  Fed vows to use 'full range of tools' to boost economy

Trump trumpeted his administration’s work on the vaccine at Friday’s Rose Garden event. Instead of laying out any future political plans, he tried to cast his administration’s response to Covid as a winning one. One of his advisers promised 20 million people could have the vaccine in December, with 25 to 30 million additional people receiving it each month after that.

"Ideally we won't go to a lockdown,” Trump said, alluding to the current record-setting rise in Covid-19 cases, before walking up to the line of conceding he was about to hand off to another president.

While Trump spoke, staffers lined the colonnade to listen to the president. Some took selfies and photos. Afterward, Trump walked back into the Oval Office and sat at the Resolute Desk as Vice President Mike Pence and top aide John McEntee settled at the chairs across from him.

As Trump has tried to make sense of the election results without conceding or calling Biden to congratulate him, White House aides and advisers have sought to show Trump is still governing. The Friday event on vaccines was part of that message.

White House chief of staff Mark Meadows has urged aides to think of conservative policy moves that can be completed during Trump’s remaining time in office, as various staffers finalize executive orders and rules to put out through agencies. The president is not involved in developing these policy plans, said one White House adviser.

Other White House staffers are looking for new jobs and coming to the White House complex later than normal. And Trumpworld is grappling with another coronavirus outbreak, with several of Trump’s top aides and allies, including Meadows, David Bossie, who is leading the president’s election legal fight, and Corey Lewandoski, another campaign aide, quarantining after contracting the disease.

Advisers do believe Trump will eventually accept the results of the election, even if he never does so publicly. Several speculate he will retreat to his South Florida resort, Mar-a-Lago, in late January, where he will eventually settle into a routine of fundraising for Republicans, providing outside commentary on Biden and contemplating his presidential library.

For now, Trump’s political advisers and allies want him to stay silent as they battle the election results on his behalf while his policy advisers keep up the work of governing as if he has already started his second term.

“I don’t think there is a cost to his silence right now,” said one Republican close to the White House.

Meredith McGraw contributed to this report.