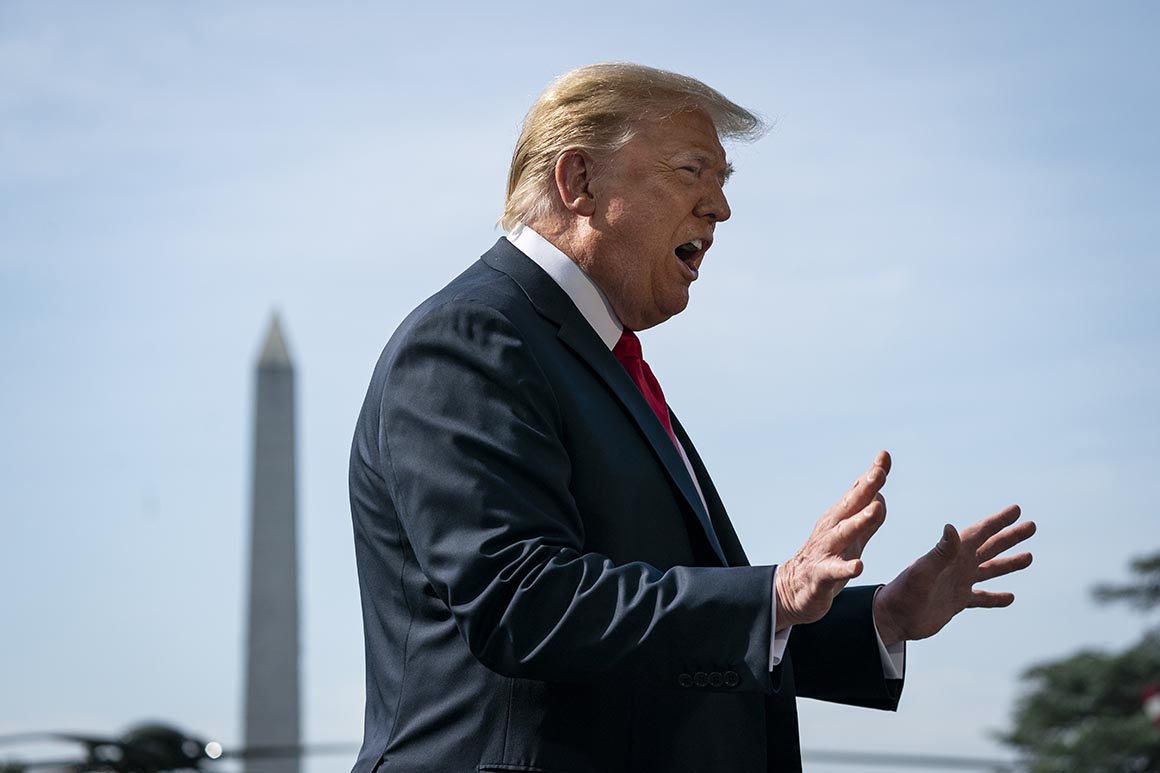 President Donald Trump’s crackdown on Twitter may have an unintended effect — hampering the marketing of some of his administration’s signature efforts, from Army recruiting to anti-vaping campaigns.

Trump pushed to curb government advertising on Facebook, Twitter and Google last month as part of an executive order that went after the internet companies on multiple fronts. “We’re going to be doing none of it, or a very little of it,” Trump said as he announced his order from the Oval Office on May 28, just two days after Twitter attached warning labels to a pair of his tweets.

While the order’s advertising provision has received less attention than its attempt to restrict liability protections tech companies enjoy, it set the stage for a conflict inside the administration between agencies that depend on social media advertising and their boss — a president who has decided those digital spots are lining the pockets of anti-conservative Silicon Valley billionaires who stifle free expression.

Trump aims to cut off a channel the federal government uses to communicate with an increasingly online American public that it still needs to enlist into service, equip with the latest health information, count for the national census and provide with public benefits.

Take the Army. The military’s biggest branch — which Trump campaigned on growing — ramped up its social media advertising in 2018 after it missed its recruiting target by a wide margin. That year, the Army fell 6,500 enlistees short of the 76,500 new soldiers it said it needed.

The Army says the digital effort is working, and now their marketing wing is trying to protect it, with staffers tracking down data to justify its spending on social ads.

“We’re targeting the ‘Gen Z’ audience to recruit into the Army, right? And that’s where they live. They live online, so we’re trying to go where they are,” said Laura DeFrancisco, a spokesperson for the Army’s Enterprise Marketing Office. “It’s very important for us to have that capability.” So far, her office has calculated that it’s on track to spend at least $15 million across multiple platforms this fiscal year.

Trump’s executive order requires all federal agencies that use social media ads to submit details on how much they’ve spent, and on which platform, by the end of June. It then directs the Department of Justice, headed by Attorney General William Barr, to use that information in deciding whether any restrictions the social networks place on viewpoints make them unacceptable for government messaging.

DOJ could decide to allow some or all of the advertising, but the potential bureaucratic hurdles raised by the order are adding uncertainty to federal efforts to embrace modern means of communicating. And if the Trump administration does make good on the president’s threat, those who’ve run branches of the United States military say it could imperil a much-needed push to keep the ranks filled.

“We have a civilian-military gap, and we have a commander in chief severely limiting the ways for us to communicate with America,” said retired Lt. Gen. Ben Freakley, who oversaw recruiting as the commanding general of the U.S. Army Accessions Command from 2007 to 2012.

It’s uncertain how the order will be implemented. Trump has released scores of executive orders that either don’t have the intended effect or get challenged in court. Already, a tech advocacy group has filed a lawsuit alleging that the social media directive limits the free speech of the platforms and the people who post to them.

And this order in particular may have trouble standing up to scrutiny. Kenneth Mayer, a professor of political science at the University of Wisconsin-Madison and an expert in executive orders, called the language “complete gobbledygook.”


But the administration appears ready to take action if it can. Some in the White House had wanted to put an outright ban on government social media advertising in the executive order, according to a Trump administration official familiar with the discussions. The idea was dropped over concerns that it wouldn’t stand up to legal challenges.

Trump has made his intention clear. “I’m directing my administration to develop policies and procedures to ensure taxpayer dollars are not going into any social media company that [represses] free speech,” he said in his Oval Office remarks. The president has argued that liberal-leaning Silicon Valley companies suppress conservative voices on their platforms, though has offered no clear evidence of systemic bias.

It’s unclear where Trump’s reference to “billions” in federal digital ad spending came from, and the figure appears unlikely. The digital marketing research firm Pathmatics found, per CNBC, that federal agency spending so far this year on Facebook, Twitter, and YouTube is in the neighborhood of $170 million.

Whatever the total, it includes both the Army outreach and advertising by a number of other departments and causes that Trump has celebrated.

The Space Force — the service Trump launched — has begun running dozens of recruitment ads on Facebook and Instagram with taglines like “Maybe your purpose on this planet isn’t on this planet.”

“Social media is very important to the Air Force in our recruiting effort,” said Leslie Brown, the chief of public affairs for the Air Force Recruiting Service, which also advertises on behalf of Space Force. “Our target demographic is online pretty much every day. We need to be where they are in order to inspire and engage them.” The value of social media ads has become even clearer during Covid-19, Brown said, as the service’s recruiting has gone mostly virtual.

READ:  Biden aims to isolate China on coal — but it could blow back on the U.S.

The White House declined to comment on the executive order’s effects on federal agency spending.

The Food and Drug Administration has run a campaign using spots on YouTube, Hulu and Spotify to highlight a public health problem Trump has warned of, too — young Americans vaping. The agency has said the campaign is meant to reach teens “where they spend most of their time: in school and online.” The FDA did not respond to requests for comment.

The Department of Veterans Affairs, meanwhile, is running hundreds of ads on Facebook and Instagram meant to connect vets with help on drug addiction, sexual trauma, bipolar disorders and more. Trump has spoken often about the importance of connecting veterans with benefits. A VA spokesperson said the agency would adhere to the order, but didn’t reply to a follow-up question on what that means for their digital advertising.

And the coronavirus pandemic may be increasing the importance of other online ads. With people searching for health information online, the Department of Health and Human Services is targeting tweets at Americans coping with the social isolation born of lockdowns.

Experts in the government’s digital ad efforts say federal agencies turn to sites like Facebook, Instagram and Twitter for the same reason other advertisers do: they’ve increasingly struggled to reach a population more likely than ever to ignore paper mail and skip over commercials, if they watch TV at all.

The Army, for its part, says the social media effort is key to maintaining its fighting strength.

Experienced military recruiters say that online platforms let them reach beyond the shrinking pool of Americans already comfortable with serving. And that includes not just 17- to 24-year-old would-be recruits but what the military calls “influencers” — in this case, not YouTube beauty stars or Instagram food bloggers but the parents, coaches and other authority figures that, research shows, greatly shape whether a young person ends up enlisting.

A 10-year Army contract of up to $4 billion for marketing efforts that range from television spots to press releases calls social networks “key channels for GoArmy brand objectives,” according to a copy released to POLITICO under FOIA. One ad that’s part of the campaign has been likened by more than one commentator to the video game “Call of Duty.” It seems to be working. The Army is on track to beat its 2020 recruiting goals, even during lockdowns.

“We’re 45 years into an all-volunteer force. Social media allows you to reach out as broadly as possible, including to places you haven’t had a physical presence,” said Eric Fanning, who served as secretary of the Army in the Obama administration.

The social ads allow a level of targeting that make government outreach more effective, said John H. Thompson, who headed the Census Bureau from 2013 to 2017. He said social media has helped the bureau address the enduring problem of undercounting difficult-to-reach populations. The Census Bureau — which has been in the middle of a court fight over Trump’s insistence that respondents be asked if they are U.S. citizens — has spent at least $18 million on Facebook and Instagram ads in the last two years. Thompson said that since the bureau’s outreach for this year’s census is already contracted, it is unlikely any decisions by DOJ would affect its advertising.

Trump has gotten more support from Republicans for his general push to rein in the social media platforms, but little specific to his effort around government advertising.

Sens. Marco Rubio (R-Fla.), Kelly Loeffler (R-Ga.), Kevin Cramer (R-N.D.) and Josh Hawley (R-Mo.) argued in a recent letter that Trump’s order is an important step in combating what they called the “mounting threat to free speech” that is “the unequal treatment of different points of view across social media."

This isn’t the first time questions have been raised in Washington about digital advertising. There have been some bipartisan concerns in recent years that the government is embracing social ads without sufficiently evaluating their goals or the cost.

Tom Cochran, who ran the IT behind WhiteHouse.gov in the Obama White House and also played a similar role in the State Department, said adding more transparency to how and why federal agencies are buying digital ads is great: “Without a doubt, government agencies improperly use social media, both organically and paid, because they don’t exactly know what they’re doing.”

That said, says Cochran, “It’s disappointing to create more red tape to prevent government from communicating where people are, when it was politically motivated — maybe personally motivated by the president.”

Meanwhile, Trump’s own reelection bid has made heavy use of social media ads. The campaign has spent some $72 million on Facebook and Google ads already this year, and shows no sign of letting up.