A deal between American Airlines and JetBlue — OK’d on Elaine Chao’s final day as transportation secretary — is generating complaints it will harm competition and raise fares. 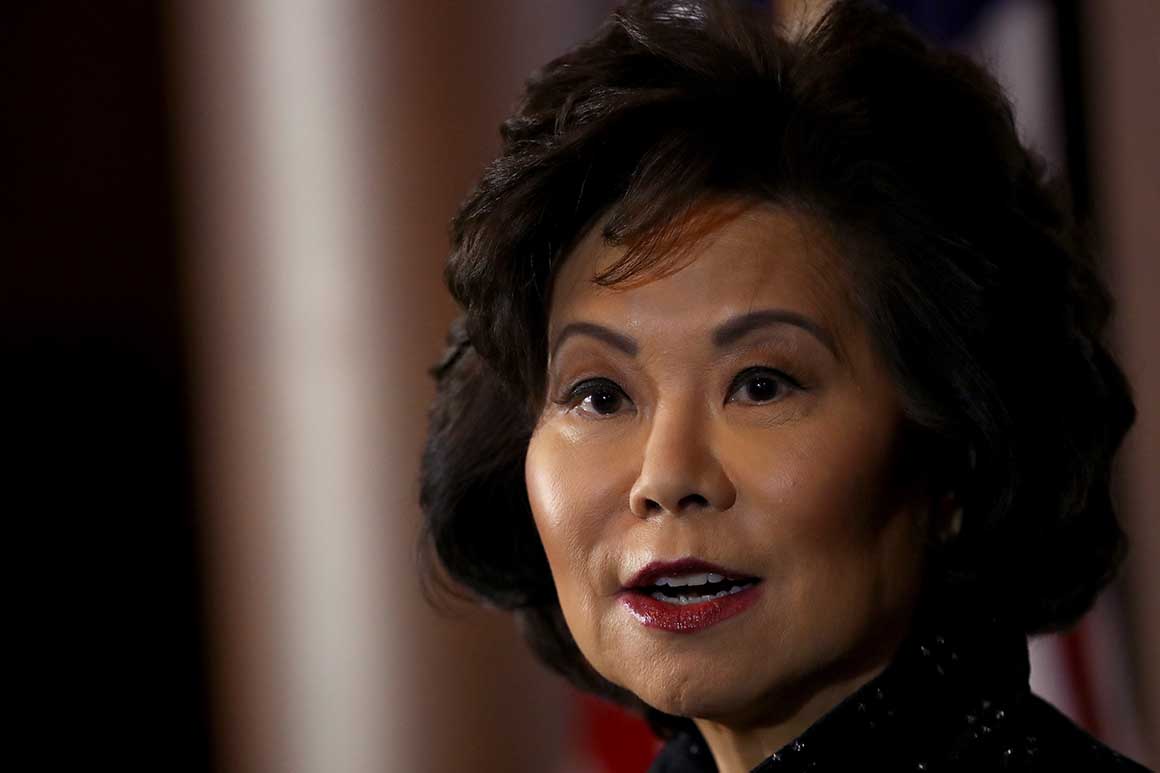 The outgoing Trump administration has approved a joint venture between American Airlines and JetBlue that could drastically reduce competition at busy airports in cities such as New York, Boston and Washington, D.C. — drawing objections from rival carriers, antitrust experts and members of Congress.

The Department of Transportation and the airlines haven't released full details about the agreement, which was approved on Elaine Chao’s last day as President Donald Trump's transportation secretary. The "strategic partnership," as American and JetBlue dubbed it, calls for the two companies to share revenue, cooperate on their frequent flyer programs and let customers book tickets with routes across both airlines.

The department placed conditions on the deal, including that the airlines divest some slots at capacity-constrained airports in D.C. and New York.

But the DOT did not open the deal for public comment, and its disclosures don't indicate whether the joint venture was reviewed by the Justice Department, which normally offers views on the potential competition concerns posed by airline alliances. DOT also did not specify that the slots that American and JetBlue are selling off as a condition of the alliance go to low-fare carriers, a break with how the Obama administration handled similar arrangements.

The agreement comes as airlines are reeling from the financial effects of the pandemic. But consumers will feel the effects for years, critics of the deal argue.

“I am concerned that the Department of Transportation approved the American/JetBlue alliance without meaningful public input just days before the start of a new administration,” Sen. Amy Klobuchar (D-Minn.), who is set to chair the Senate Judiciary Committee’s antitrust subcommittee, told POLITICO. “Although the airlines and airline workers need support to make it through this crisis, it should not be at the expense of consumers.”

Low-cost carrier Spirit Airlines has filed a complaint with DOT about the deal, and Klobuchar urged President-elect Joe Biden’s administration to review the decision.

The department defended its review of the deal, while adding that "the alliance remains subject to all applicable federal and state antitrust laws."

American, the United States' largest airline by the number of passengers carried, announced the proposed alliance with JetBlue in July. The partnership will allow customers to book tickets that span both airlines' routes and schedules and receive reciprocity if they are a frequent flyer with one of the companies. These types of agreements are more typical between international airlines, not domestic ones.

In an agreement dated Jan. 10 between the airlines and DOT, American and JetBlue pledged not to communicate with each other about the fares they charge and to collectively divest seven slots at New York's John F. Kennedy International Airport and six at Ronald Reagan Washington National Airport.

In most cases when airlines propose alliances, DOT opens a public proceeding where rivals, trade groups, unions and others can offer comments and propose remedies for any lost competition. That didn’t happen with the American and JetBlue joint venture.

Spirit Airlines filed a complaint last week with DOT about the lack of a public proceeding. A “conservative” estimate of the partnership, Spirit said, would lead consumers to pay $383 million more each year for airfare, a 5 percent increase in prices.

A DOT spokesperson said the department followed normal procedure, adding that the department "does not typically conduct a public proceeding for reviews of codeshare or alliance agreements under" the statute that applies to the American-JetBlue deal. The department will review Spirit's complaint "in due course" and decide if an investigation is warranted, the person added.

At Reagan National, American and JetBlue will account for 60 percent of the available slots, according to Spirit. At JFK, American-JetBlue and Delta, the second largest carrier at that airport, will operate 80 percent of slots; at New York’s LaGuardia, they will operate 81 percent. While Boston’s Logan International Airport is less constrained, the pair will control the majority of flights and in some markets will be the only available carriers, Spirit said.

American and JetBlue combined “are essentially monopolists at DCA and duopolists with Delta at JFK and LGA, and with United at [Newark] EWR, with no possibility of new entry at any of those airports or even at Boston where there are virtually no available ground facilities,” Spirit said.

In a Jan. 11 letter supporting Spirit’s complaint, Southwest noted that JetBlue acquired many of its slots at National and LaGuardia from American Airlines after the Justice Department required divestitures in order for American to merge with U.S. Airways in 2013. That process drew heavy scrutiny from Congress at the time, with more than 100 House members urging the Obama administration to preserve nonstop flights to and from DCA.

“If American and JetBlue coordinate their services at these airports as the press reports indicate, JetBlue would obviously no longer be considered an independent [low-cost carrier] providing competitive discipline to American or other legacy carriers,” Southwest said in its letter this week. 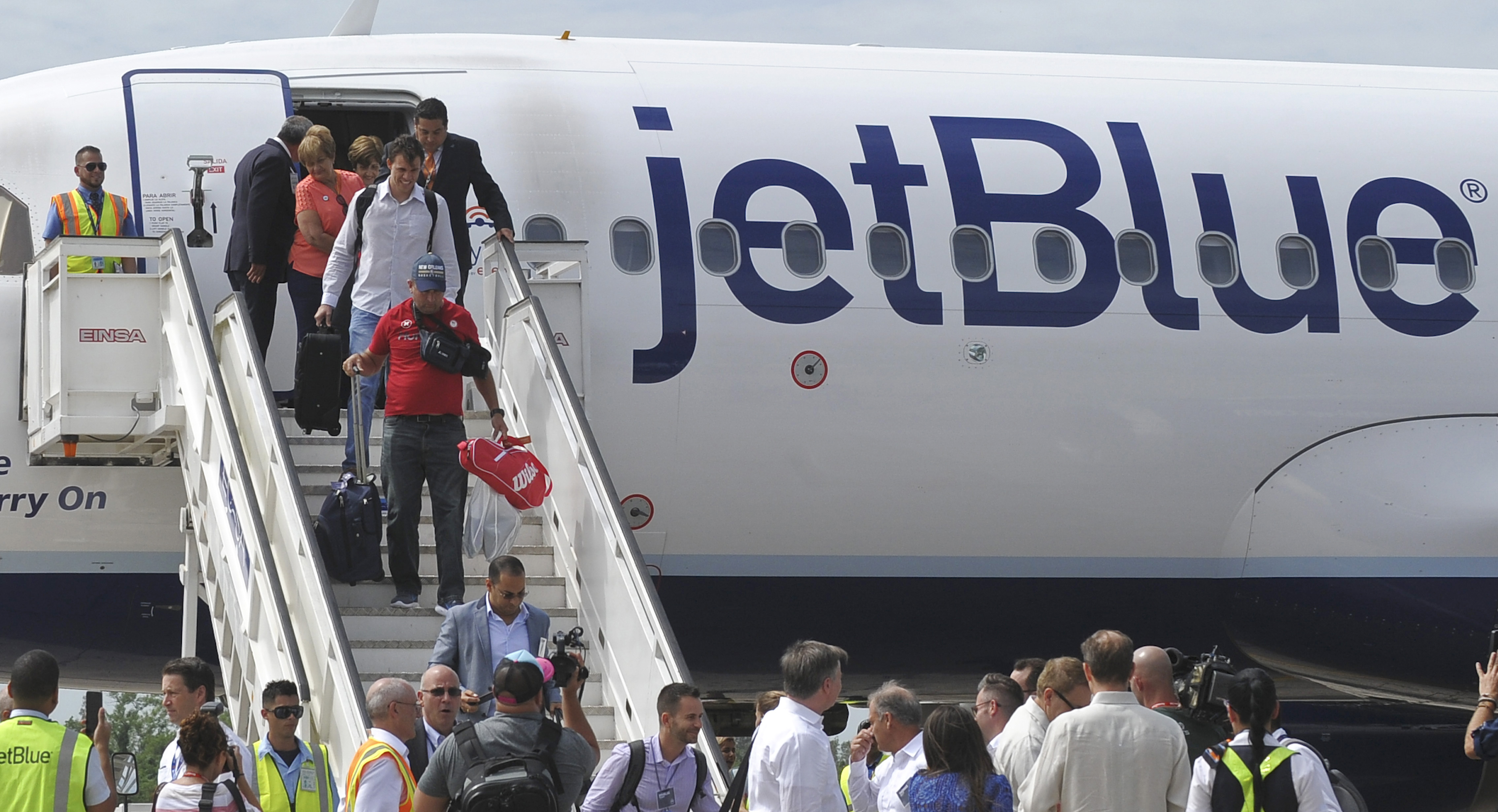 JetBlue and American didn’t respond to requests for comment. The Justice Department, which normally plays a key role in determining the harm to competition in these kinds of deals, declined to comment on whether it was involved in the DOT review or had any concerns about the alliance.

“Low-cost carriers, who have been dwindling away as a result of consolidation, are really the key to protecting and promoting competition and consumers,” said Moss, who has researched how airline mergers and alliances raise prices. “The biggest worry about this alliance is that it makes it harder for low-cost carriers to get a foothold in the market.”

But industry analysts were less persuaded that the partnership would have a significant impact on air travel options with the exception of Reagan National.

Airline industry analyst Robert Mann characterized the comments against the deal as a case of “sour grapes.” Airlines like Spirit and Frontier would like to expand their low-fare service but have had difficulty, particularly at LaGuardia, he said.

DOT did not specify that the divested slots should go to low-fare carriers, travel industry analyst Henry Harteveldt said, which is unusual.

“The Obama administration clearly had a stronger view on preserving low fare competition at an airport where you had a limited number of highly prized assets,” Harteveldt said. “I was both surprised that the DOT didn't want these slots designated for a low-cost or low-fare airline, but not surprised because Elaine Chao has been very hands-off.”

He said that without DOT specifying any role for low-fare service, a major carrier could easily pick up the “very precious, very valuable” slots that American and JetBlue are giving up if DOT decides to open bidding. Delta indicated during an earnings call this week that it would be interested in the vacated slots.

Chris Brown of the National Air Carriers Association, which represents the low-cost carriers Spirit, Allegiant, Frontier and Sun Country, said the department may have felt the need to act quickly because of the pandemic, but ultimately the decision is short-sighted.

“This is a case where they are robbing Peter to pay Paul,” said Brown, vice president of government affairs and ultra-low cost carrier policy. “We think the negative consequences outweigh the benefits by far.”