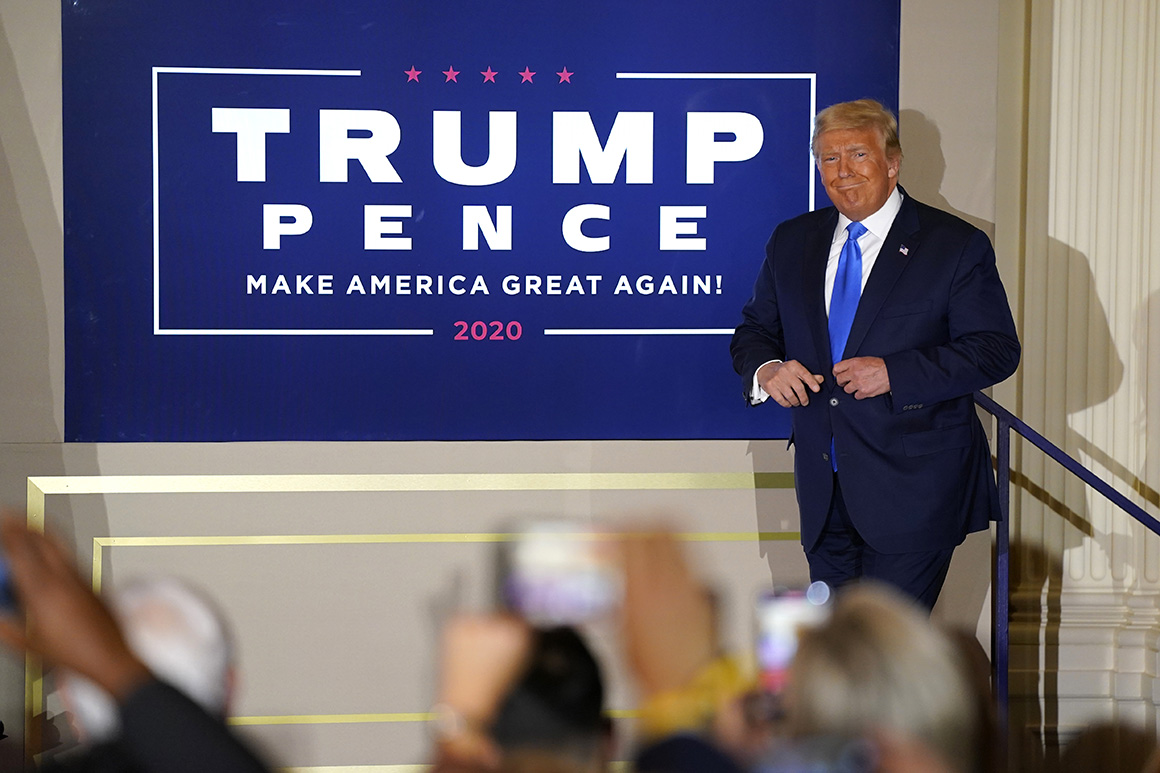 Donald Trump’s decision to prematurely declare victory in the hours after Election Day and pledge to quash the ongoing counting of legitimate ballots provoked some of the most withering bipartisan criticism of his presidency early Wednesday morning — with even some of his most ardent allies all-but accusing him of thrusting the country to the precipice of political crisis.

The president’s baseless claims of victory at a celebratory event in the East Room of the White House had been foreshadowed for weeks and months. Trump has vented outrage over the expansion of mail-in voting amid the coronavirus pandemic and repeatedly warned of efforts to “steal” the race from him.

His overnight remarks came as races in battlegrounds across the country remained too close to call with thousands of mail-in ballots left to be counted. Neither Trump nor Democratic nominee Joe Biden have clinched the 270 Electoral Votes needed to secure the presidency, the winner of which will likely be decided by to-be-called races in Wisconsin, Pennsylvania, Michigan, Georgia and Nevada.

Nevertheless, when Trump attempted to claim victory at around 2:30 a.m. Wednesday, he was met with condemnation by prominent Republican figures and informal advisers providing color commentary on news networks — including former New Jersey Gov. Chris Christie, a longtime ally and adviser of the president.

“I talk tonight now not as a former governor, but as a former U.S. attorney. There’s just no basis to make that argument tonight,” Christie told ABC News, rejecting Trump’s assertion that a “major fraud” had been perpetrated on the United States and its voters.

“There comes a point where you have to let the process play itself out before you judge it to have been flawed,” Christie said, adding: “I think it’s a bad strategic decision, it’s a bad political decision, and it’s not the kind of decision you would expect someone to make tonight who hold the position he holds.”

Former Pennsylvania Sen. Rick Santorum, who endorsed Trump in 2016, also said on CNN that he was “very distressed by what I heard the president say,” and that Trump’s suggestion “that there’s fraud being committed by the people counting votes, I think, is wrong.”

“The president is a 70-some-year-old man at 2:30 in the morning, after a very stressful time. And I think he was just unfortunately being more a raw version of himself. And so that’s just disappointing,” Santorum said.

“I hope that … they walk it back tomorrow and say, ‘We want the votes to be counted,’” he added. “Particularly in Arizona. If you want them counted in Arizona, you need to count them in Pennsylvania, Michigan and Wisconsin, too. And Georgia.”

Indeed, Trump’s speech was riddled with contradictions. He claimed it was “clear that we have won Georgia” and that he had “clearly won North Carolina” — both battlegrounds that remained too close to call as of Wednesday morning — while attacking Fox News’ call that Demcoratic presidential nominee Joe Biden had successfully flipped Arizona.

The president complained that Texas “wasn’t added” to his column — although several news organizations called the state for the president — and insisted that he was “winning” in the Great Lakes-area battlegrounds of Michigan, Pennsylvania and Wisconsin, where vote-counting remained underway Wednesday morning.

For his part, Biden — who preempted the president's White House appearance with his own speech early Wednesday in Wilmington, Del. — commended the "patience" of his supporters and declared that the election "ain't over until every vote is counted, every ballot is counted."

Results from the key states of Michigan, Pennsylvania and Wisconsin are not expected to materialize until sometime later this week, and experts have cautioned that Trump’s early advantages there could be explained by still-uncounted mail-in ballots that are expected to generally favor Biden.