In the end, President Donald Trump built a mere fraction of what he promised. 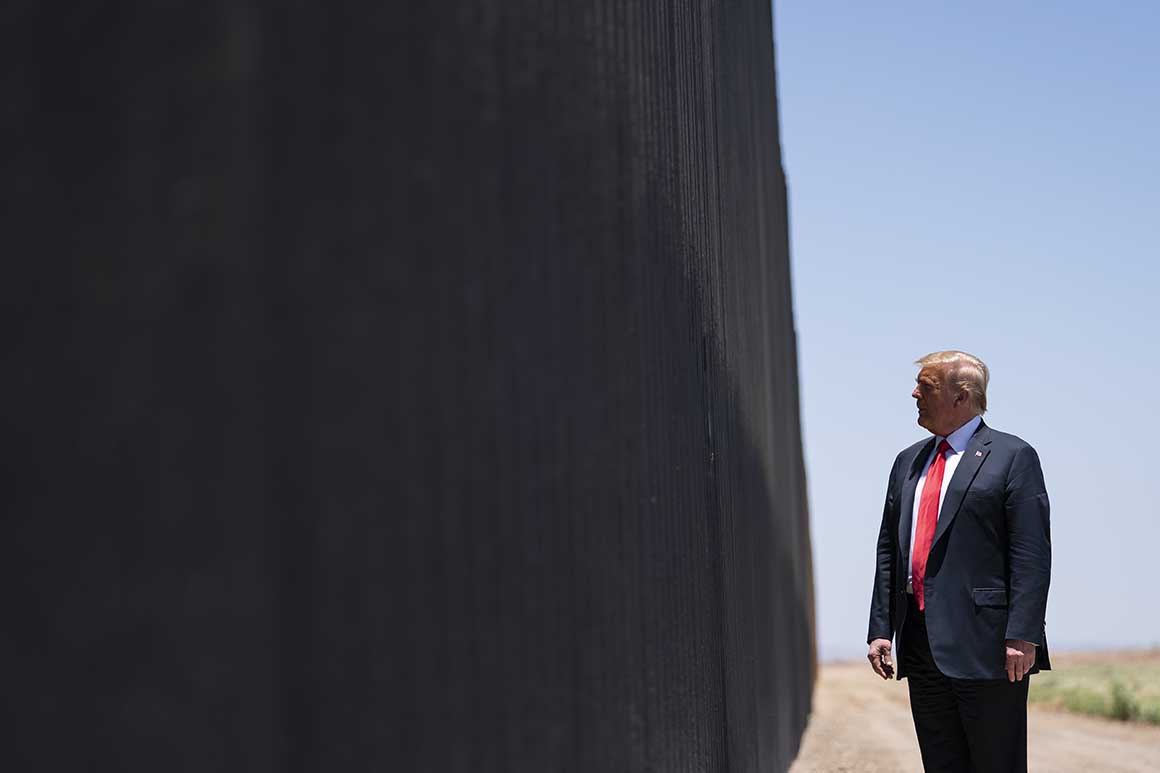 Donald Trump is approaching the end of his presidency the same way he started his candidacy: talking about a border wall.

It has been more than five years since Trump announced his presidential bid with a promise to build a “great, great wall” along the U.S.-Mexico border. In the end, Trump built a mere fraction of what he promised, 452 miles of a wall — most of which replaced old, existing fencing. And he never got Mexico to pay for it.

Still, Trump is visiting the city of Alamo in Texas’ Rio Grande Valley on Tuesday to tout the border wall as a “promise made, promise kept” by his administration while he faces a House vote on Wednesday to impeach him again — and he continues to face fallout from his own party for urging his followers to march to the U.S. Capitol, which resulted in a deadly riot.

But his partially built border wall is a reminder, in the end, of unfulfilled promises. However, for Democrats, former U.S. and Mexico officials, immigrant advocates and migration experts agree: It remains a symbol of the Trump presidency, defined from the beginning by anti-immigrant rhetoric and hardline policies.

“What he accomplished in four years with the wall could’ve been done in a bipartisan way with less noise. But that was never the purpose. It wasn’t about the wall,” said Andrew Selee, president of the nonpartisan Migration Policy Institute.

“This was always about a larger symbolism about walling off America from outside dangers,” Selee added.

The 452 miles of border wall that have been constructed are only a fraction of the 1,954 miles of U.S.-Mexico border. And only a small portion of the 452 miles — about 40 miles as of Dec. 18, according to a Customs and Border Protection report published by nonpartisan Factcheck.org — is newly constructed wall where none previously existed.

“It’s really a failure,” said Rep. Henry Cuellar (D-Texas), a lawmaker representing part of the border. “Instead of saying let’s heal the country together. It’s not happening. His priority is the fence. His priorities are his priorities and not the country’s.”

Some Democrats and immigrant advocates said they were worried about the potential for violence during Trump’s visit — especially given the recent insurrection and the president’s longstanding anti-immigrant rhetoric.

“It’s incredibly dangerous,” said Alida Garcia, vice president of advocacy at FWD.us, a bipartisan pro-immigration group. “We’ve seen since the first two minutes of President Trump launching his campaign that he wanted to define a war in quotes along the border and against immigrants, Latinx people, asylum seekers and Mexicans.”

The Trump administration has spent more than $15 billion on the border wall project — all of it coming from either appropriations from Congress or diverted funds from the Defense Department. None of it was paid for by Mexico — a promise Trump repeatedly made on the 2016 campaign trail, but which was completely shut down by Mexican officials under two different administrations.

CBP Acting Commissioner Mark Morgan said in a press call last week the agency already has funding to complete another 300 miles of barriers and aims to award contracts for construction before President-elect Joe Biden takes office.

Biden has previously vowed that there “will not be another foot of wall constructed” during his administration, but existing contracts could complicate efforts to stop some construction. He also has said he will not tear down parts of the wall built under Trump. Biden will be under pressure to follow through on a long immigration to-do list that includes undoing much of Trump’s immigration policies — and delivering more pro-immigrant policies than President Barack Obama, who was dubbed the “Deporter in Chief.”

READ:  The other American being held in Moscow

Trump’s visit marks the first time he has stepped out in public since the deadly riots at the Capitol. In recent days, he’s been increasingly isolated, still complaining about the election he lost to Biden, and not having events on his daily schedule. Meanwhile, several Trump administration officials have resigned following the insurrection.

On Monday, Acting Homeland Security Secretary Chad Wolf announced he would step down from his position, citing “recent events,” including recent court rulings challenging the legality of his appointment to the post. “These events and concerns increasingly serve to divert attention and resources away from the important work of the department in this critical time of a transition of power,” Wolf wrote in a letter to the department.

The White House would not say who is accompanying the president on his Texas trip or whom he would meet with once there. However, Texas’ Republican Gov. Greg Abbott and Lt. Gov. Dan Patrick will be in Austin on Tuesday for the first day of the Texas legislative session, Texas Tribune reported, so they are not expected to meet with Trump.

Members of the Hidalgo County GOP, however, were “calling all Conservatives, Patriots & Freedom Fighters” on Facebook and Twitter to welcome Trump to the border area with posters. While Biden comfortably won in the Latino-majority county, it’s one of the areas in South Texas where Trump made his most significant improvements in the 2020 election. Trump boosted his numbers in Hidalgo County by more than 23 percent compared to 2016, but still lost by 17 percent.

The City of Alamo on Monday afternoon said the Trump administration did not formally contact them about the president’s trip, which was announced over the weekend. Robert Salinas, Alamo’s city manager, urged that all demonstrations be “peaceful and respectful.” James Darling, mayor of neighboring city McAllen, said he understands “that emotions are high on both sides,” but called for peaceful demonstrations.

Other Texas border Democrats, like Reps. Vicente González and Filemon Vela, on Monday urged for Trump to cancel the trip and for elected officials to boycott his visit. Vela pointed out that Trump should focus less on the wall and more on the pandemic, given how hard-hit the Rio Grande Valley has been by Covid-19.

“If the President insists on pursuing this wasteful trip, he should not show up empty handed. He should bring hundreds of thousands of vaccine doses and the military personnel necessary to help inoculate the residents of South Texas,” Vela said.