Various advisers have pushed for Trump to focus on economy, a second-term agenda or law and order — anything that avoids tweets about the Confederate flag. 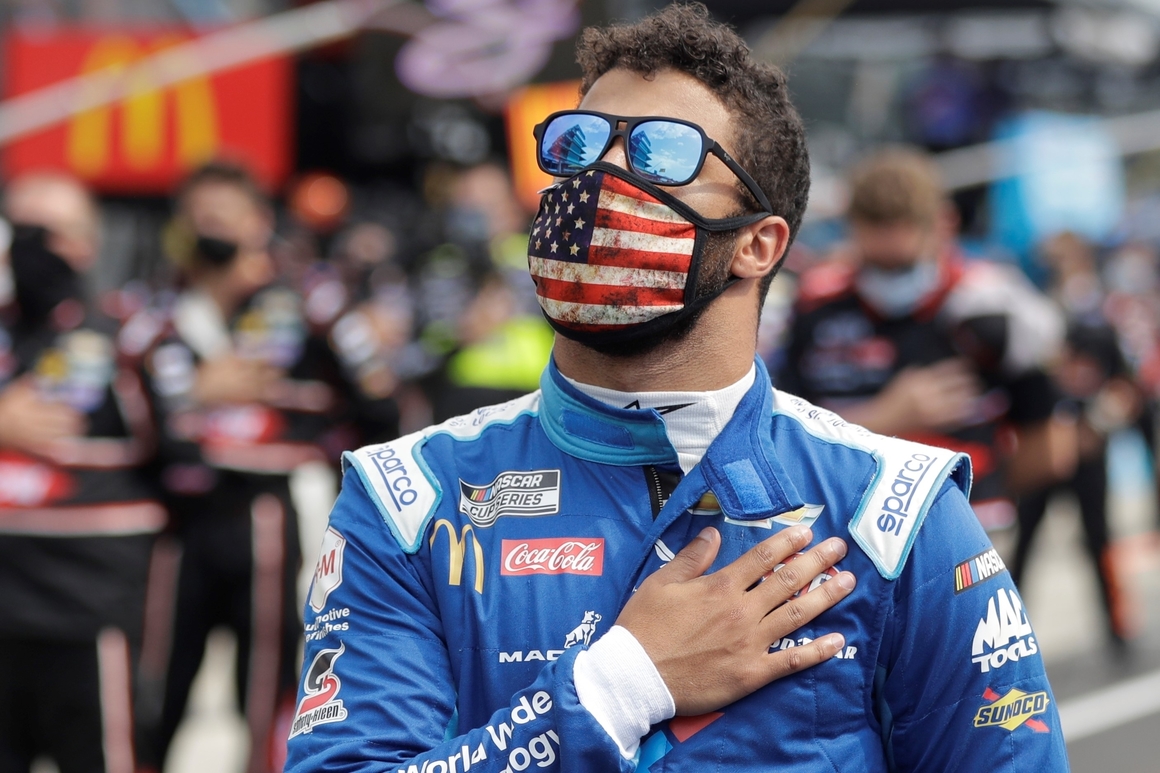 Donald Trump’s team can agree on one thing: The president’s latest Twitter outbursts and off-script grievances are hurting his reelection prospects.

That’s about where the agreement ends.

Some top aides want the president to zero in on plans to revive the economy, arguing it could boost his standing in the polls by as much as 5 to 10 percentage points. Informal advisers like Karl Rove have publicly nudged the president to lay out a second-term agenda, arguing a focus on immigration, trade and energy would energize voters. And other advisers, like chief of staff Mark Meadows, want Trump to talk more about law and order, saying it would appeal to suburban female voters.

While the president regularly hits all of those themes, he has grabbed the most attention in recent days with his favored culture wars of late: attacking NASCAR’s lone top-tier African American driver and refusing to condemn the Confederate flag.

It was a tactic Trump used to launch himself to the White House in 2016. But his advisers say the world has changed since the coronavirus pandemic seized the global economy and nationwide protests against police brutality erupted. In that climate, they fear voters won’t be as receptive to certain divisive culture war issues, especially the independent voters, senior citizens, suburban women and the sliver of African Americans Trump must win to carry crucial swing states like Wisconsin, Ohio or Pennsylvania.

“He has been spoiled with his successes, but I’m not sure it is the same atmosphere as it was in 2016,” said one Republican close to the White House. “The problem is when he gets off on the tangents on the Confederate flag. I’m not here to defend that.”

Several Republican strategists said reviving cultural wars and making not-so-subtle nods to Confederate sympathizers is not a way to mobilize the voters outside of Trump’s hardcore base. Trump has also leaned hard into arguments that Michael Flynn, his first national security adviser, was duped by the deep state into lying to the FBI, and allegations that presumptive 2020 rival Joe Biden’s family is corrupt.

“People do not care about Michael Flynn or Biden’s kids,” says Ed Rollins, chair of the Pro-Trump Great America PAC and former national campaign director for President Ronald Reagan’s successful 1984 campaign. “Those issues are complicated. People care about whether you can lead the country through these two crises of a pandemic and a recession.”

“I thought when the virus broke out and the economy fell apart, it gave Trump an opportunity to step up and show what kind of leader he could be, but he certainly did not do it well,” Rollins added. “If we are sitting here on Labor Day with these polling numbers, we will not turn it around.”

Part of the problem stems from Trump’s insistence that he alone acts as his best campaign manager, communications director and strategist. Campaign staffers are quick to say the president drives the message. They simply follow and amplify his words.

Few staffers or advisers around the president can give him bad news, apart from a handful of allies, like Sen. Lindsey Graham (R-S.C.) or House Minority Leader Kevin McCarthy (R-Calif.).

More often, advice to Trump is delivered by friends or surrogates on television: a medium the president monitors so closely that the ensuing coverage drives his reactions. It was on TV recently that former New Jersey governor and longtime Trump friend Chris Christie urged him to drastically change his tone and approach heading into the November election.

Recent national polling has consistently shown Trump trailing Biden by an increasingly large margin — though Trump campaign officials are quick to say such polling is flawed and that they are more focused on polling in nonbattleground states. That polling, though, paints a bleak picture for the president, too. The nonpartisan Cook Political Report predicted on Wednesday a Democratic “tsunami” at the polls in November, with Georgia, Arizona, North Carolina and Florida up for grabs — and Wisconsin and Pennsylvania leaning Democratic.

Counselor to the president Kellyanne Conway told reporters at the White House on Tuesday that Trump’s reelection message should hinge on the president’s handling of the economy, his patriotism and his work on health care, which she argued would resonate with women.

But several advisers believe the president should hammer a message of supporting law enforcement and police, especially as cities like Atlanta, Chicago and New York have experienced recent surges in gun violence, including spates of shootings over the July 4 weekend. They see such appeals as more effective than specific attacks on African Americans like Bubba Wallace which, privately, Republicans have viewed as disastrous.

And some donors and advisers want Trump to continue his campaign to protect controversial statues and monuments. They see a fine line between that push, which they say resonates with many Americans, and tweeting about the Confederate flag, which they say is a losing issue.

The result, at times, has been an all-of-the-above approach that can bounce between each message.


Trump’s political advisers are “not yet on the same page” on the messaging, said Newt Gingrich, a Trump ally and former House speaker. “It is a work in progress, but it is early July. They will get to that by the time they get to the convention.”

“The challenge is to find the discipline to stick to the messages and to keep coming back and hammering on them,” Gingrich added. “When Trump is on his A game, he is the best politician in the country. They just have to keep him on his A game for three months.”

In those months, Trump will get a lot of scrutiny, with cases of the coronavirus surging and many Americans still stuck at home.