The president is running out of time, with voting already underway in some states and few voters still undecided. But tonight’ debate gives him an opportunity to make his case. 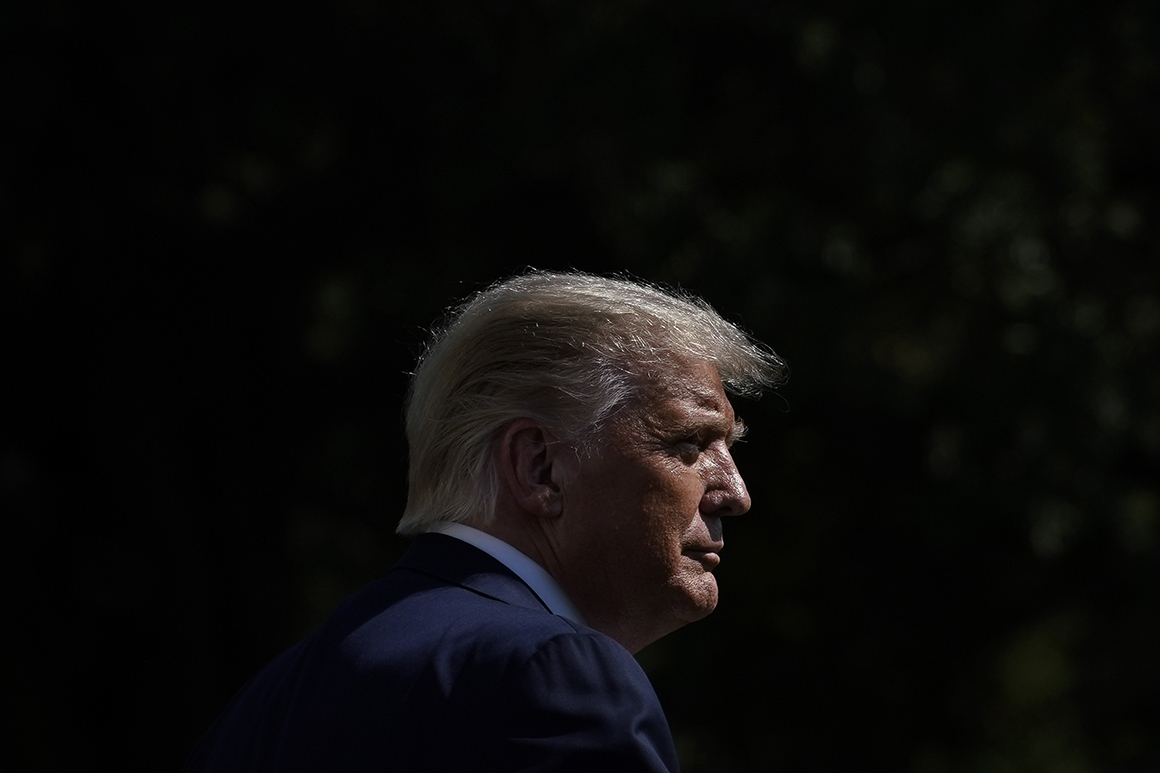 He isn’t, Biden's campaign says. Nor is there any evidence, despite Trump’s suggestions, that Biden is on drugs.

What is clear is that Biden’s ahead in public opinion polls — and that Trump needs desperately in the debate tonight to turn his campaign around.

He is running out of time, with early voting already underway in some states and few voters still undecided. But he was also underestimated in 2016, and the debate tonight – the first of three – will afford him an audience of millions.

Trump spent so long portraying Biden as confused and mentally “out of it” that everyone could see right through the course correction when it came.

Biden was an “uneven” debater, Trump said Sunday — sometimes “okay,” but probably because he used performance enhancing drugs. Today, insinuating the presence of an earpiece (a claim Biden’s campaign denied), Trump’s advisers asked for a pre-debate inspection of Biden’s ears.

It was too late. Trump pushed expectations for Biden so low that his supporters will turn on their televisions expecting to see Biden — teleprompter-less — collapse in a puddle of his own drool. Since the odds are high that he won’t, they will be in for a deflating night.

The kernel of truth in Trump’s assessment of Biden is that he has, in fact, been an uneven debater. Viewers of the Democratic primary debates will remember him telling parents to keep “the record player on” at night, promising to “keep punching” at domestic violence and imploring an audience to “go to ‘Joe 30330,’” as if they could text a website. He sometimes rambles, and he sometimes awkwardly cuts himself off.


But Biden was sharper in his one-on-one debate with Sen. Bernie Sanders this spring — the more focused, two-person set-up appearing to stabilize him. Before that debate, Sanders’ advisers, like Trump’s, had also bet on Biden underperforming, only to see him rise to the occasion.

Americans have already grimaced through reels of Joe Biden gaffes — and they don’t seem to care. The frontrunner, he doesn’t need a standout performance, only a stable one. And because of Trump’s wildly undisciplined exercise in expectation setting, Biden can come off looking like Hercules as long as he doesn’t expire on stage.

The difficulty for Trump, as it has been since the start of the campaign, is that Biden is far less polarizing than Clinton. Nothing that Trump has thrown at Biden has stuck — not China, not Biden’s mental acuity, not Hunter Biden’s ties to Ukraine.

Tonight’s debate may represent Trump’s last best chance to drag Biden through the mud — anything to pull his favorability down.

How low will Trump go? Like so much else in the nation’s discourse, Trump set the rhetorical bar for debates fairly low when, four years ago, he threatened to jail Clinton and called her the devil. Trump has already called Biden a “dummy” and a “loser,” and that was before he suggested Biden was on drugs.

But Trump has to try something. His most effective smear may be the one closest to the truth — that Biden is a creature of Washington. That worked for Trump with Clinton.

It’s inconvenient for Trump’s reprisal of the outsider argument that he is now the incumbent president. But it is not an impossible case to make. The line he has been road-testing is one about Biden’s “47 years,” contrasting his own tenure with the time he says Biden has spent “betraying” Americans. Expect variations of that argument tonight.

Biden’s a lot harder to tear down than other, less avuncular Democrats, so Trump has spent much of the campaign trying to yoke him to softer targets.

It will be a minor miracle if Trump refrains from mentioning Clinton tonight, as he has at recent rallies. He is almost certain to invoke Rep. Alexandria Ocasio-Cortez. Biden, in Trump’s messaging, is a puppet of the progressive left.

None of that has worked for Trump so far. But he will have a new opening tonight, during a discussion about the U.S. Supreme Court. Biden has refused to say if he opposes calls from within the Democratic Party to expand the court in response to Republicans filling a vacancy before the election, a change he has long opposed. Nor has Biden released a list of people he would consider appointing, as Trump has.

Those are blank spaces, and Trump will eagerly fill them in. At a rally in Middleton, Penn., over the weekend, he telegraphed the approach: “Joe Biden has refused to provide his list because the names will be handpicked by socialists like Representatives Alexandria Ocasio-Cortez, AOC,” Trump said. “If given power, the far-left will pack the Supreme Court with radicals.”

Viewers may not buy that, of course. Biden is a centrist and an institutionalist who defeated more progressive Democrats in the primary. A more convincing foil might be the other person in the room, veteran moderator Chris Wallace. The media isn’t particularly popular, and Wallace is less likely than Biden to hit back.

Referendum, or a look ahead?

The election began as a referendum on Trump. And despite all of the disruption this year, including a global pandemic and widespread civil unrest, it has remained so.

For Trump, the results have not been pretty. Earlier this month, deaths from the coronavirus topped 200,000. Schools and businesses are still closed. The economy is in tatters.

The key tension in the debate will be whether Biden can keep the focus on Trump’s current governing record or whether Trump can pivot to a more favorable conversation about the future.

In one debate segment, on the coronavirus, this will likely play out as straightforward push-and-pull between what Trump could have done this year to control the virus versus what he might still do. Expect Trump to claim, as he has before, that a vaccine is just over the horizon and that Biden, if elected, will “delay” it – something there is no evidence to support.

In another segment, on civil unrest, Trump will be more in his element. His law-and-order campaign has largely fallen flat, in part because his dire warnings about “Biden’s America” all reference unrest occurring in a country where Trump, not Biden, is president. The imperative for Trump is to persuade Americans that life can get worse than it already is. Fear and anger are reliable motivators in elections, and Trump needs to lean into both if he’s going to turn his campaign around.

One part of the past that Trump will almost certainly not be able to avoid is his taxes, after revelations in The New York Times that he paid just $750 in federal income taxes in 2016 and 2017.Trump’s refusal to release his tax returns in 2016 and continuing through the current election – was a major break with precedent, and Biden kept attention on the issue by releasing his own 2019 tax returns just before the debate. The returns showed Biden paid nearly $300,000 in federal income taxes in 2019, about 30 percent of his $985,000 in adjusted gross income.

Perhaps the most revealing discussion tonight will not pertain to the vote — but to what happens after.

For more than four years, Trump has made repeated, baseless claims about widespread voter fraud, and he has refused to commit to a peaceful transition of power if he loses. Last week, he said he expects the contest to “end up in the Supreme Court,” as if that were normal (it isn’t; Bush v. Gore was an aberration).

None of this is news. But the moderator will be devoting 15 minutes in front of a viewership of millions to “election integrity,” and what is said may reverberate far more than anything else.

Americans have already lost a significant amount of faith in the electoral system. According to a recent Yahoo News/YouGov poll, just 22 percent of Americans expect the presidential election to be “free and fair.” This has immediate practical implications for November, with some evidence that lower trust in an electoral system results in decreased turnout.

But it also suggests that the electorate is primed for a post-election scramble over the results. How Trump inflames the lack of confidence in voting — and how Biden responds – will offer a preview of not just of what the closing days of the campaign will offer, but also its immediate aftermath.