The president’s supporters worry Biden can grab a larger slice of a critical voting bloc — when Trump can least afford departures from his base. 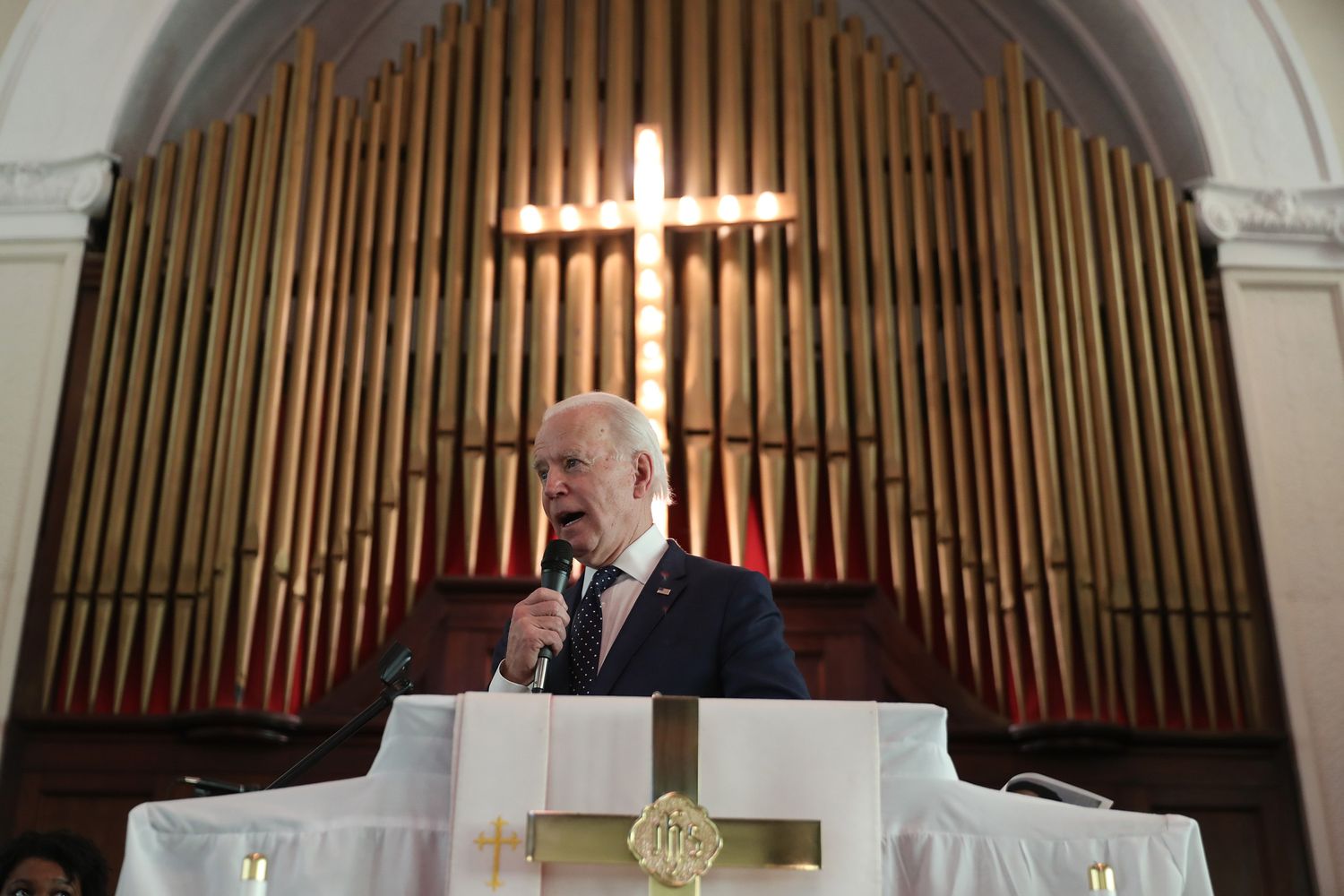 It was June 10, 2008. Presumptive Democratic presidential nominee Barack Obama had gathered with dozens of evangelical leaders — many of them fixtures of the religious right — at the urging of campaign aides. If he could offer genuine glimpses of his own abiding faith, they insisted he could chisel away at the conservative Christian voting bloc.

At a rally in the Bible Belt, he talked about the church he’d attended for two decades in Chicago. Calling for an “all-hands-on-deck approach” to tackle poverty, he promised churches and religious organizations would play a greater public role in delivering social services under his administration. And during a faith-based forum in Southern California, he said his own support for Roe v. Wade, the 1973 Supreme Court decision on abortion rights, did not mean he wasn’t interested in reducing abortion in America.

The strategy worked. Obama’s campaign stops at churches, sermon-like speeches and his professed belief in Jesus Christ earned him 24 percent of the white evangelical vote — doubling Democrats’ support among young white evangelicals and gaining three points with the overall demographic from the 2004 election.

Now, allies of President Donald Trump worry his 2020 opponent, Joe Biden, can do the same — snatching a slice of a critical voting bloc from Trump when he can least afford departures from his base.

Biden, a lifelong Catholic, has performed better in recent polling among white evangelicals — and other religious groups — than Democratic presidential nominee Hillary Clinton did in 2016, and is widely perceived as more religious than the current White House occupant. A Pew Research study conducted earlier this year showed that a majority of U.S. adults (63 percent) think Trump is “not at all” or “not too religious,” versus 55 percent who said they believed Biden is somewhat or very religious.

Many conservative evangelical leaders have argued that Biden’s positions on cultural issues — like abortion, judges and religious freedom — are disqualifying. Still, anxiety is growing inside Trump’s orbit about the former vice president’s ability to peel off Christian voters who supported him in 2016, including the 81 percent of white evangelicals he carried, according to eight administration officials, White House allies and people involved with the Trump campaign.

Such an outcome could deal a fatal blow to the president’s reelection, which largely hinges on expanding his support with religious voters to compensate for enthusiasm gaps elsewhere.

“Here’s the problem for Trump: he needs to be at 81 percent or north to win reelection. Any slippage and he doesn’t get a second term, and that’s where Joe Biden comes into play,” said David Brody, chief political analyst at the Christian Broadcasting Network. “In this environment, with everything from the coronavirus to George Floyd and Trump calling himself the ‘law-and-order president,’ Biden could potentially pick off a percent or two from that 81 percent number.”

“It would behoove him to take a play out of the Obama playbook in 2008,” Brody added.

Some of Biden’s campaign appearances and debate answers have been infused with religious undertones, and his campaign reportedly hosts a weekly call with faith leaders to crowdsource policy and personnel suggestions.

At a CNN town hall in February, Biden said his faith “gives me some reason to have hope and purpose” and praised the “ultimate act of Christian charity” shown by members of Emanuel AME Church in Charleston, S.C., after they forgave a white supremacist who murdered nine members of their congregation in a 2014 mass shooting.

In an op-ed last December that included references to Scripture and Pope Francis’ second encyclical “Laudato Si,” Biden described “the core concepts of decency, fair play and virtue” that he learned through his Catholic upbringing as guiding principles in his political career. 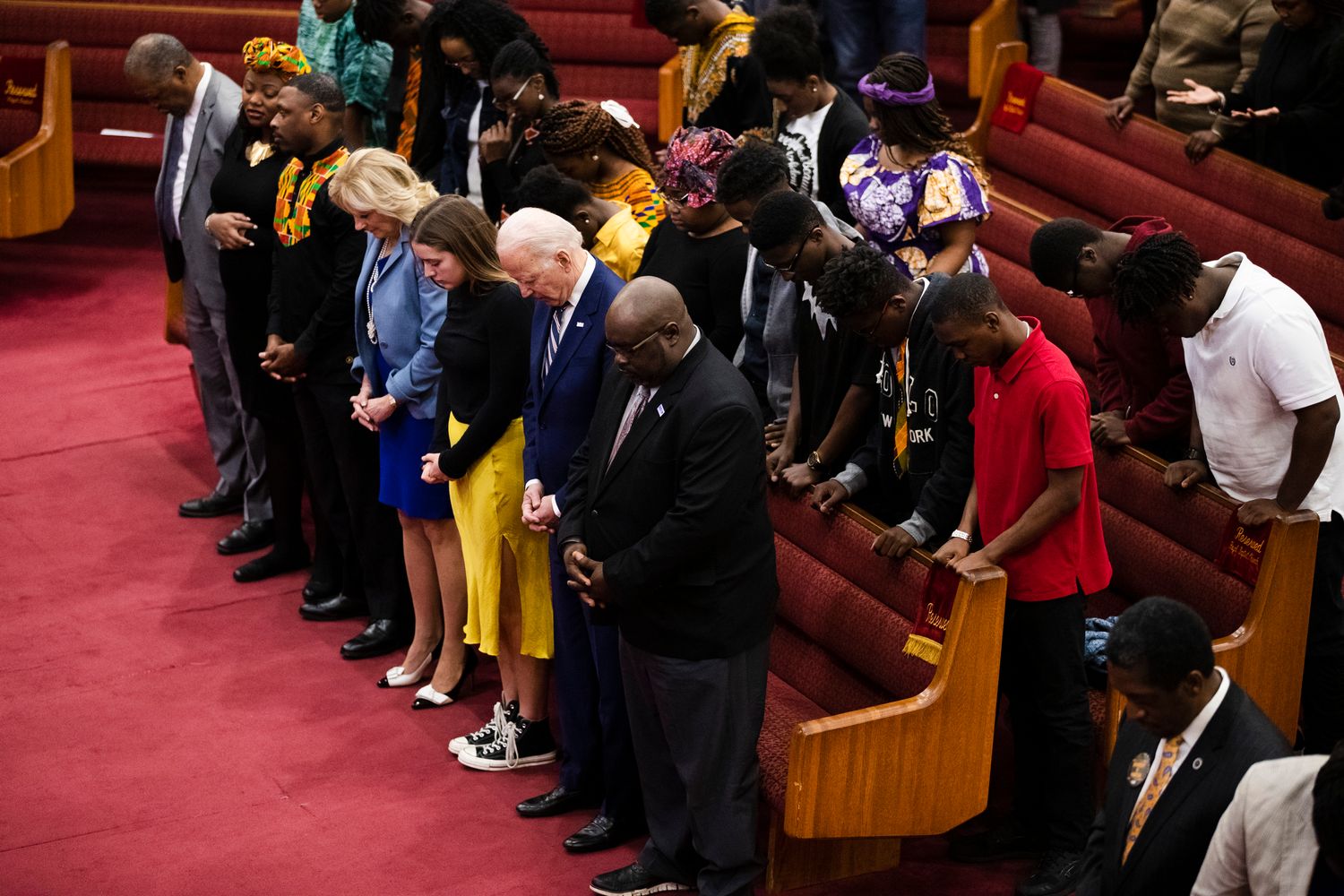 A person familiar with the talks said the Biden campaign is also in the early stages of potentially scheduling an on-camera sit-down with Brody, who conducted several interviews with Obama during his 2008 campaign. The Biden campaign declined to comment on the record.

Rob Stutzman, a Republican strategist who has argued that Biden has an opening to make inroads with Christian conservatives, said the candidate should invoke his faith more often, as opposed to constantly referencing his accomplishments from his time as vice president and a member of the U.S. Senate.

“He would be well-served to talk more in those terms, instead of telling people to check out his record,” Stutzman said. “There are a lot of themes that fit the moment related to justice, authority and loving your neighbor and not in a way that would necessarily make white evangelicals uncomfortable if Biden could speak to them.”

Even Trump allies recognize that Biden has an opening to strike the empathetic and compassionate tone that Trump eschewed in many of his comments about the coronavirus pandemic and nationwide protests over racial inequality.

In addition to forcefully clearing out protesters so he could wave a Bible in front of Washington’s St. John’s Church the day after rioters lit part of the sanctuary on fire — a wildly unpopular move, according to recent polls — Trump has labeled people involved in the anti-racism demonstrations “thugs” and recently struggled in a television interview with former White House press secretary Sean Spicer to cite examples of how he’s “grown in his faith” since becoming president.

Trump did sign an executive order outlining some police reforms on Tuesday, though it was panned by his political opponents for not going far enough or directly confronting the systemic bias that many Americans believe has long existed in law enforcement along with other institutions.

The president's law-and-order mantra arrived at an already perilous time for his campaign, which has witnessed a steady erosion in support for Trump across key religious demographics and a leftward shift in voter attitudes on issues of race and criminal justice. Trump has already seen double-digit declines in his support from white Catholics, white evangelicals and white mainline protestants since April — unsettling trends that triggered his recent overtures to conservative Christians, including his visit to St. John’s and an executive order on religious freedom that he signed earlier this month.

“There are evangelicals who didn’t vote for Trump in 2016 who will in 2020, but there are plenty of white evangelicals who are disappointed in his administration’s response to coronavirus and are embracing — for the first time ever — some belief in systemic racism,” said John Fea, a history professor at Messiah College. “They are the ones who are just dying for a reason not to vote for Trump.”

On Wednesday, the Trump campaign announced a new “Faith in America” tour led by Vice President Mike Pence, who has been leading the administration's engagement with African American conservatives and clergy following the Minneapolis police killing of George Floyd, a 46-year-old black man. It was not immediately clear whether the tour, which Pence will begin with a visit to Wisconsin next week, will be focused on outreach to religious groups.

The announcement came days after the Supreme Court upheld workplace discrimination protections for LGBTQ Americans, prompting widespread backlash from religious conservatives, many of whom were awestruck to find that Justice Neil Gorsuch — a Trump appointee handpicked by the conservative legal activists — wrote the majority opinion.

“The Supreme Court decision has caused some evangelicals to lose faith in the political playbook that says justices and judges can deliver what we care about,” said Fea, noting that one of Trump’s main appeals to white evangelicals is his record on judicial appointments and his promise to continue appointing conservative judges.

“It’s not going to have a big effect on evangelical support for Trump, but in the mix of all these other things it does add up,” he added.

For its part, the Trump campaign has worked to paint Biden as an “extremist” on abortion, seizing on his sudden rejection of the Hyde Amendment last year after supporting the 43-year-old law, which prohibits most federal funding for abortion services, for decades.

READ:  Fauci: ‘Of course it would be better if we could start working with’ Biden transition team

Two people involved with the president’s 2020 operation said its “Catholics for Trump” coalition plans to ramp up its criticism of Biden on abortion and religious freedom in the coming weeks. One of them said the issue has been discussed as a potential topic in campaign ads.

Biden has previously said he accepts the Catholic Church’s position on abortion, which condemns the termination of a pregnancy as “gravely contrary to the moral law,” but “is not prepared to impose that on every other person.” At the same time, he has vowed to enshrine Roe v. Wade, the 1973 Supreme Court decision on abortion rights, into federal law if elected and to restore federal funding to Planned Parenthood — two positions that most white evangelicals oppose, according to polling. (Sixty-seven percent of white evangelicals backed restrictions that would make abortion illegal except in cases of rape, incest or when the mother’s life is at risk in an Associated Press-NORC Center for Public Affairs Research survey conducted earlier this year).

One adviser to the Trump campaign said Biden’s record on abortion will make it difficult to peel away religious conservatives, for whom overturning Roe is their top priority, but it doesn’t mean there aren’t white evangelicals and Catholics who care more about other issues — or the character of either candidate — and might be compelled to support the presumptive Democratic nominee.

“We shouldn’t ever take a voting bloc for granted and if you look at Biden’s appeal among cultural Catholics — especially in the Rust Belt — it’s all the more reason for us to ensure that every Catholic, every evangelical, every atheist who supported President Trump in 2016 does so again this November,” said the adviser.

Fea, who teaches in Mechanicsburg, Pa., added that “hardscrabble working-class Catholics” in the Philadelphia suburbs and across Ohio, Wisconsin and Michigan should be a primary target for the Biden campaign. He noted that although Trump won the Catholic vote by a seven-point margin four years ago, his support has wavered far more with Catholic voters than it has with white evangelicals, providing a ripe opportunity for his opponent.

“In some ways, just the fact that he is Joe Biden from Scranton, Pennsylvania is going to win him Catholic votes in those states,” Fea said.