Experts say that seeking widespread immunity in the manner the scientists prescribe could result in the deaths of hundreds of thousands or even millions more U.S. residents. 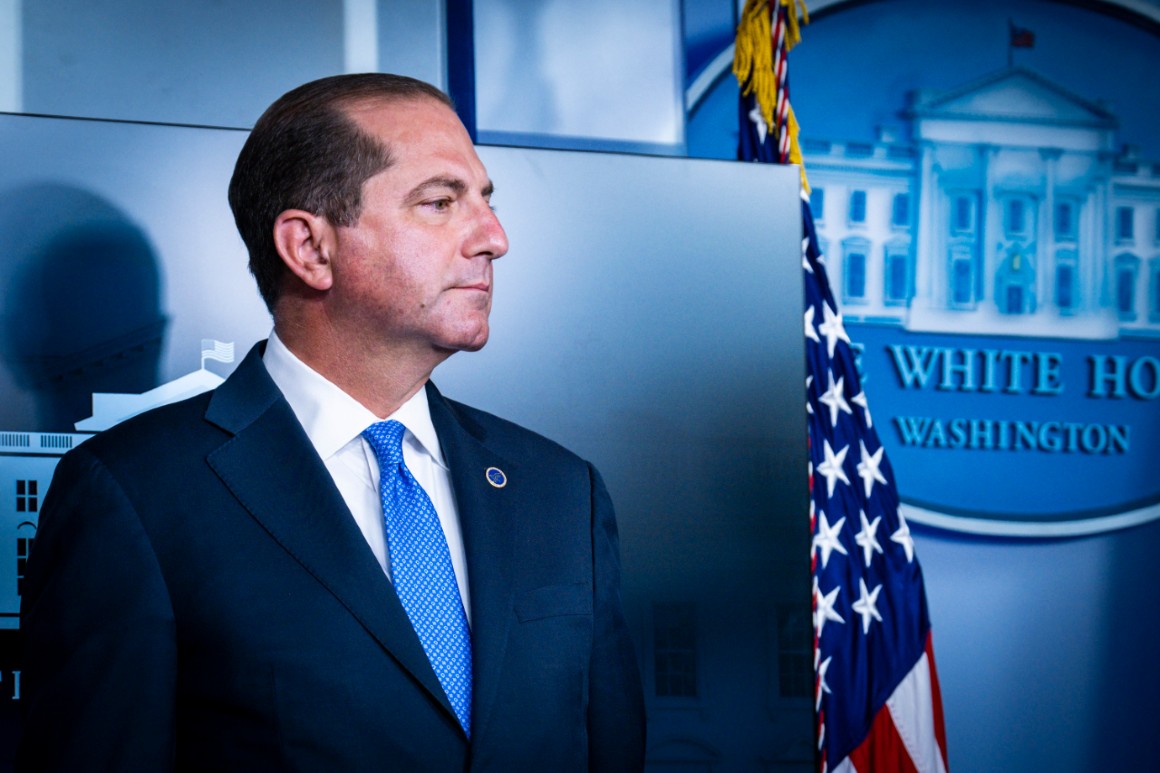 The Trump administration’s health chief met Monday with a trio of scientists who back the controversial theory that the United States can quickly and safely achieve widespread immunity to the coronavirus by allowing it to spread unfettered among healthy people.

The meeting with Health and Human Services Secretary Alex Azar, which also included Trump adviser Scott Atlas, is the latest example of administration officials — including the president himself — seeking out scientists whose contrarian views justify the government’s handling of a pandemic that has killed 210,000 people and infected nearly 7.5 million so far in the U.S.

Mainstream medical and public health experts say that seeking widespread, or herd, immunity in the manner the scientists prescribe could result in the deaths of hundreds of thousands or even millions more U.S. residents.

That aligns with the “herd-immunity” strategy endorsed by Atlas, who Bhattacharya said was their “point of contact” for the meeting. Atlas, a neuroradiologist and senior fellow at Stanford University’s Hoover Institution, has emerged as a favored adviser to the president despite his lack of expertise in public health, infectious disease or epidemiology, and his skepticism of basic safety measures like wearing masks.

HHS refused to comment on the scientists’ meeting with Azar and Atlas’ role in it, or whether the Trump administration is shifting to a herd immunity strategy.


Studies by the CDC and academic scientists have concluded that fewer than 10 percent of Americans had antibodies to the virus by July. That’s far fewer than the 60 to 70 percent infection rate most experts believe is needed to achieve herd immunity. They say that getting there without a vaccine would dramatically increase the Covid-19 death toll and leave a large number of Americans with lasting health problems.

Given those facts, Azar’s tweet set off alarm bells among public health experts worried that the administration is pushing a return to normal life before the virus is contained or a vaccine is available.

“This is not a good faith attempt to talk to experts. This is an attempt to cherry pick credentialed people who happen to agree with the administration’s political instincts or political inclinations,” said Jeremy Konyndyk, a former Obama administration official who oversaw disaster response.

The scientists who met with Azar have repeatedly advanced questionable theories about the virus’ risks and the impact of lockdowns.

Bhattacharya co-authored a study with colleagues at Stanford that suggested the coronavirus infection rate was up to 85 percent higher in Silicon Valley than previously estimated, suggesting that the virus was not nearly deadly enough to justify continued lockdowns.

The analysis, released in April without undergoing peer review, quickly came under attack from other scientists who questioned the accuracy of the antibody test used in the study, and the authors’ research methods — which included recruiting participants through Facebook and social contacts of the scientists, raising the risk of an unrepresentative sample.

Bhattacharya and his colleagues revised the study’s findings just two weeks after they released it, reducing their projection of how many people had been infected by one-third.

Across the pond, Gupta and colleagues in her Oxford research group opposed the stringent lockdown orders the U.K. imposed in March, arguing at the time that “the death rate or the likelihood of dying from infection was very low.” Her stance earned her the nickname “Professor Reopen” in a June Wall Street Journal editorial. Meanwhile, more than 42,000 Britons have died from Covid-19 so far and more than a half-million have been infected.

In her appearance Monday on Ingraham’s Fox show, Gupta advocated narrowing coronavirus testing criteria to focus on vulnerable people instead of children going to school and other healthier populations. Broad testing is “a very inefficient use of very limited resources that we have,” she said. “Don't test [healthy people.] Let them live their lives and let them build up the immunity that will eventually protect the vulnerables.”

Kulldorff, who is based at Harvard, has emphasized protecting the elderly and medically vulnerable populations while other communities achieve some semblance of herd immunity.

“Somehow, herd immunity has become a toxic phrase, which is strange, since it is a scientifically proven phenomenon just like gravity,” he said in an interview with Jacobin Magazine. “The issue is how to get there with the minimum number of casualties. We do not know what percent immunity to the coronavirus is needed to achieve herd immunity, but we do know that if there are many older people in the group that is infected, there will be many deaths. On the other hand, if mostly young people are infected, there will be very few deaths.”

Death rates from the coronavirus are exponentially lower among children and young adults than elderly people, but recent studies also show they can spread the virus fairly easily. A CDC study this summer showed the virus’ rapid spread through a Georgia summer camp, with 44 percent of people there testing positive for the virus — more than half between six and 10 years of age. The findings show that the virus can spread “efficiently in a youth-centric overnight setting: and “adds to the body of evidence demonstrating that children of all ages are susceptible,” scientists wrote.

Konyndyk said that Bhattacharya, Gupta and Kulldorff’s arguments focus only on the risk of death, instead of taking into consideration potential long-term disability and impairment from Covid-19.

But Kulldorff said that the group’s approach “is nothing new, as it is standard public health practice.” The trio discussed a “focused protection” strategy with Azar, Kulldorff said, which would involve isolating vulnerable and elderly people but letting others return to normal life.

Bhattacharya also denied that he backed a herd-immunity approach, but told POLITICO that broad lockdowns should be lifted. “The current universal lockdown strategy, which aims at herd immunity through ineffective and difficult to enforce population control measures, will ultimately cause more damage and death both in the U.S. and around the world,” he said in an e-mail.

Many cities and states began easing lockdown requirements beginning in May, and there is wide variation in restrictions across the country.

And the concept of natural herd immunity is hazy. Even in New York, which has seen the most concentrated outbreak in the U.S. so far, the CDC estimates that only about 22 percent of the population has antibodies against the coronavirus.

“If we are just truly trying to obtain herd immunity naturally, I don’t think [protecting the vulnerable] would be possible,” said Michael Mina, an epidemiologist at Harvard T.H. Chan School of Public Health. “We would have too many cases, it would sneak in. The biggest predictor of cases entering into a nursing home for example is what’s happening at the community level.”

Millions more rapid coronavirus tests expected to become available in the coming months — representing a paradigm shift in the country’s ability to contain the virus, according to Mara Aspinall, a professor of biomedical diagnostics at Arizona State University helping the Rockefeller Foundation develop its recommendations for a U.S. testing strategy.

“It is essential to control transmission, 35,000 people getting sick each day is not acceptable,” Aspinall said. “If we have the opportunity to reduce that, we should take it.”

Federal officials such as Fauci and other public health experts have repeatedly argued that widespread testing, mask wearing and social distancing is needed to ward off further spread while scientists scramble to produce an effective vaccine.

“We have it completely within us to stop transmission and keep outbreaks under control in a sufficient way so that we don’t have to make this tough decision of trying to achieve natural herd immunity as our only option to get the economy back going,” Mina said. “That’s frankly what Trump’s policy is whether he is willing to say it or not.”

For his part, Azar last week denied that a herd-immunity approach was gaining traction within the Trump administration.

"Herd immunity is not the strategy of the U.S. government with regard to coronavirus," Azar said during a hearing of the House Select Subcommittee on the Coronavirus Crisis, in response to questioning from Rep. Jamie Raskin (D-Md.). "We may get there, we may get herd slowing-of-transmission as we perhaps have seen in the New York area and other concentrated areas. Our mission is to reduce fatalities, protect the vulnerable, keep coronavirus cases to the lowest level possible."