Videoconference to emphasize ties with Washington only highlights myriad disagreements. 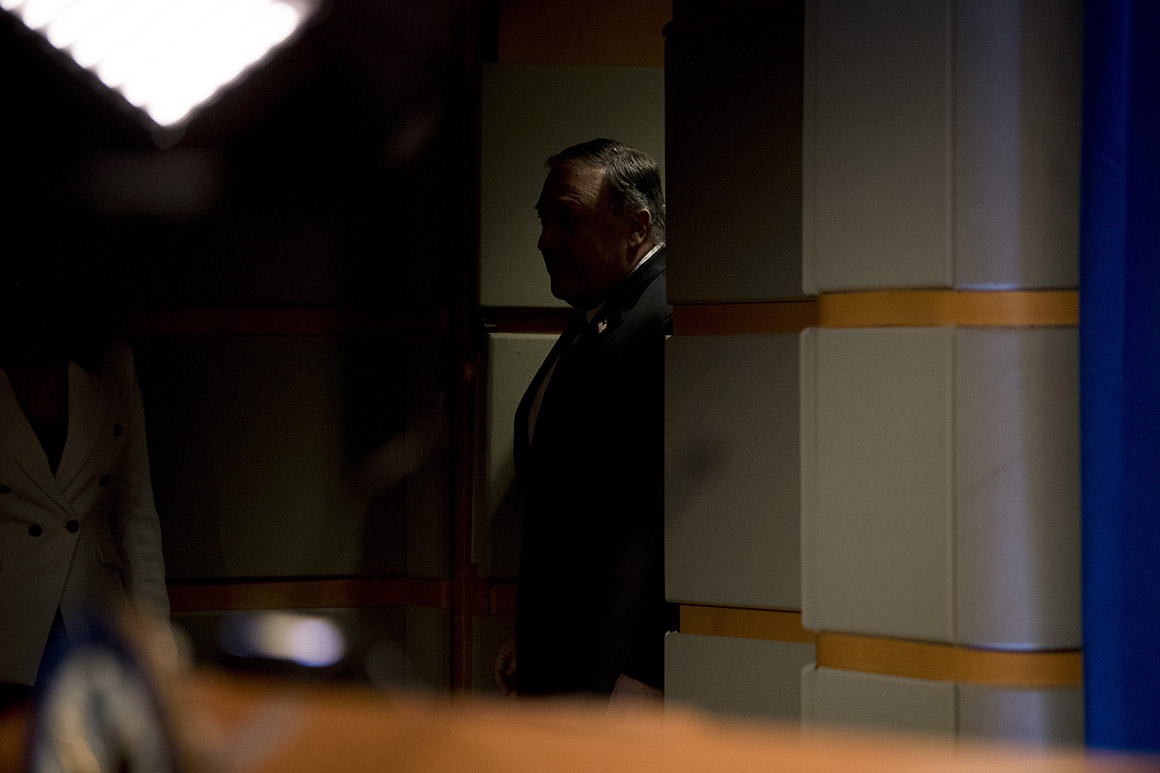 Trans-Atlantic relations are seemingly so bad, even speaking English didn't help EU foreign ministers get their message across to Donald Trump's top diplomat.

After leading a 90-minute videoconference Monday with U.S. Secretary of State Mike Pompeo — during which they discussed a range of topics they disagree on — EU foreign policy chief Josep Borrell wanted to know if his news conference would be translated into Spanish or German.

"But it's about the United States so we can stick to the English," his spokesman, Peter Stano, replied.

Indeed, Borrell stuck to English — not that Washington seemed to care one way or another.

The commitment of Brussels, however, was never in question. And the videoconference only highlighted just how far the traditional allies have drifted apart.

When the subject of the coronavirus came up, Borrell said, the EU expressed its dismay over Trump's decision to quit the World Health Organization.

"We underlined that there is currently no better example of the need for international cooperation than this health crisis," Borrell said. "That's why we have regretted the U.S. announcement that they intend to withdraw from the World Health Organization and expect that this decision could be reconsidered, because global problems need global solutions and multilateral tools and multilateral cooperation is more needed than ever.

"There is a big demand," he added, "and short supply."

When the subject of Middle East peace came up, the EU diplomats stood by their displeasure at Trump's one-sided proposal that favors Israel, and the EU's firm opposition to any unilateral seizure by Israel of Palestinian territories.

At his news conference, Borrell stretched to find something positive to say.

"We recognize the merit of the U.S. plan because it has created a certain momentum where there was nothing and I think this momentum can be used to start an international process," he said. "But this process from the European side has to be on the basis of existing internationally-agreed parameters. And it's not a secret because it has been said in several EU statements that the initial plan presented by the U.S. does not agree with these parameters."

When Borrell and some EU foreign ministers expressed concern about Turkey's actions in the eastern Mediterranean, including unauthorized oil drilling that's angered Cyprus and Greece, Pompeo apparently had no interest.

The main topics of the video meeting were China, the Middle East and the EU's "eastern neighborhood" — an oblique reference to Russia and particularly the continuing conflict in eastern Ukraine.

On Ukraine, at least, Borrell said that the EU and U.S. mainly see eye to eye. "Our position remains clear and unchanged," he said, urging Moscow to take steps to implement the Minsk peace agreement.

But on China and the Middle East, differences in opinion among EU countries, as well as between Brussels and Washington, left a rather muddled result. Borrell said he proposed continuing "bilateral dialogue" with the U.S. on China, but there was no response from the American side.

The German foreign minister, Heiko Maas, called for a multilateral push to restart peace talks between Israel and the Palestinians, but Pompeo was noncommittal.

"Mr. Pompeo has not accepted nor refused anything," Borrell said.

Trans-Atlantic relations have soured continuously since Trump took office and began pulling the U.S. out of international agreements supported by the EU, including the Paris climate accord and the Iran nuclear agreement. But in recent weeks things have taken a decided turn for the worse as Trump declared he was cutting ties with the WHO in the midst of a global pandemic, withdrawing from the Open Skies treaty, and planning to sharply reduce the number of U.S. troops stationed in Germany.

The State Department, for its part, issued a terse readout after Monday's videoconference, that jabbed at Russia and China but offered little in the way of enthusiasm for the old Western alliance.

"Secretary Pompeo, High Representative Borrell, and the ministers discussed the importance of the Trans-Atlantic partnership in rebuilding our economies post-COVID, as well as upholding our shared commitment to democratic values that serve as a bulwark against Russian and PRC [People's Republic of China] attempts to undermine democratic societies," the State Department statement said. "The Secretary highlighted joint U.S. and EU resolve to uphold Ukraine's sovereignty and territorial integrity and our insistence that Russia cease its aggressive actions in the Donbass region."

Maas, in public remarks, noted that EU-U.S. solidarity was urgently needed to send a message to Beijing, including about its heavy-handed treatment of Hong Kong, and in insisting on compliance with international trade rules and other treaty obligations.

"We will only enforce these demands toward China if Europe and the U.S. pull in the same direction," Maas said.

But while the diplomatic scene is bleak, some officials said that Trump's disdain for Trans-Atlantic relations was more rhetoric than reality — a view particularly held in countries close to the Russian border who rely on the U.S. for deterrence against Moscow.

It is, for example, the view of Lithuanian Foreign Minister Linas Linkevičius.

“Definitely any [U.S.] withdrawal is not something we would like to see, but we believe that this is a U.S. decision anyway and … that the commitments with regards to Europe will not be diminished," Linkevičius told POLITICO.

Linkevičius participated in the meeting with Pompeo, and spoke on behalf of the Baltic countries as well as Poland. He said the main problem with Washington seemed to be a matter of communication. “There's lack of coordination somehow because we do not have the permanent regular dialogue and we really have to improve this," he said, adding that discussions at the EU level should take place “at least twice per year.”

Yet Linkevičius said he did not fear American disengagement in Europe, and that the reality on the ground supported his view.

“So far we do not have reasons to be afraid because we do not see this happening ... judging from our region, for instance, from the engagement, from the presence of U.S. troops,” he said, referring to a recent deployment of 500 U.S soldiers in Lithuania. “We cannot make the conclusion that the U.S is less engaged.”