“If your question is, should you use tear gas to clear a path so the president can go have a photo-op, the answer is no.” 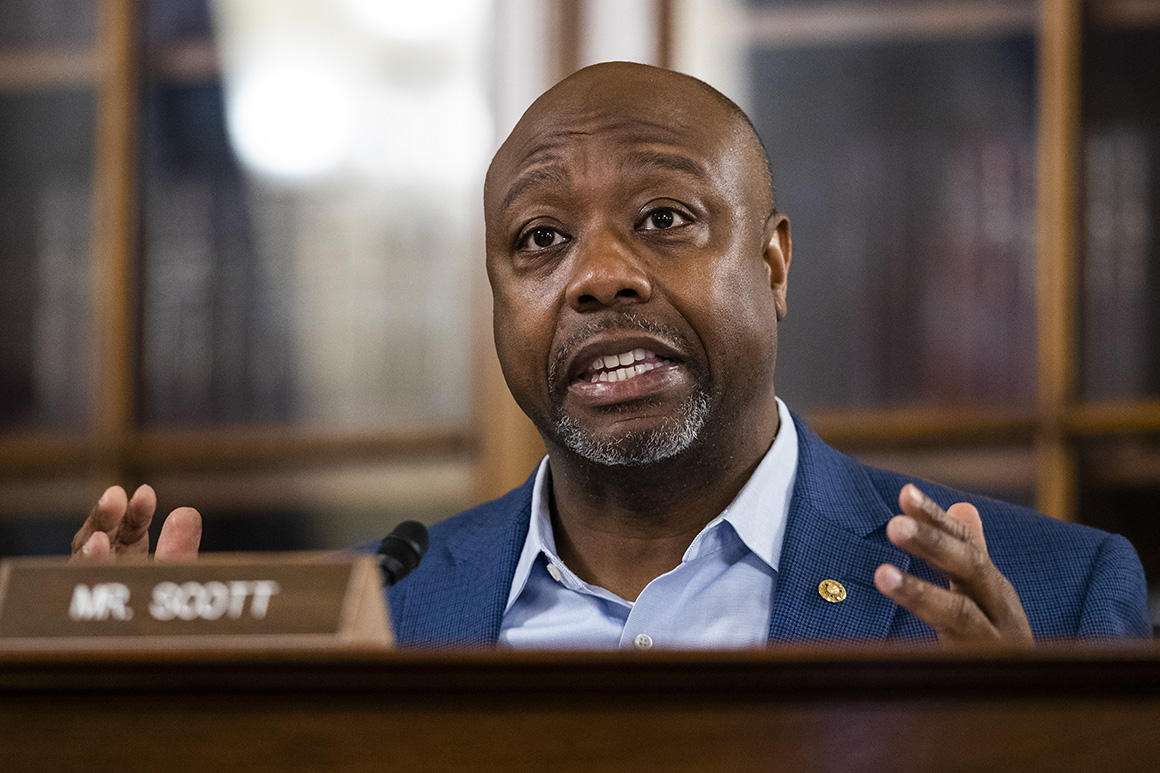 Sen. Tim Scott said Tuesday that protesters in Lafayette Square should not have been cleared with tear gas and rubber bullets to accommodate President Donald Trump's visit to a historic church, a rebuke of the president by the only black Republican in the Senate.

In an interview with POLITICO chief economic correspondent Ben White, Scott (R-S.C.) said he did not think Trump’s visit to St. John's Church — the "church of the presidents" — was helpful and it was not something he would have done.

“But obviously, if your question is, should you use tear gas to clear a path so the president can go have a photo-op, the answer is no,” Scott said, while noting he did not personally see the incident.

Trump has been widely criticized for his visit Monday to St. John's, which forced police and National Guard troops to push peaceful protesters from Lafayette Square. With the park cleared, Trump walked across it to visit the church, which he posed outside of for photographs while holding a Bible. The church, which has been visited by every president since James Madison, was briefly set on fire in its basement over the weekend amid protests and riots sparked by the death of a black man, 46-year-old George Floyd, in Minneapolis police custody.


Scott, one of two black GOP lawmakers in either house of Congress, spoke about the need for order as well as a national reckoning on police abusing minority communities.

Scott recounted a Saturday conversation with Trump where he urged the president to use his platform to focus on the death of George Floyd, who was killed after being pinned down by a police officer’s knee to his neck.

Scott also discussed his personal experiences being stopped by law enforcement, including an incident two months ago for an improper use of a turn signal.

“The crisis is decades of abuse within the minority communities at the hands of a minority of law enforcement officers,” Scott said. “If there is any place on earth on where abuse of power matters the most for a civil society, it’s within law enforcement.”

The South Carolina Republican also praised the work of the National Guard and supported Trump’s push for order on the streets of cities across the U.S.


“Order is necessary for us to actually have the conversation about Mr. Floyd,” Scott said.

While the president has described rioters as “thugs,” Scott expressed understanding for the pain that some Americans have felt in the wake of Floyd's death.

“When you have dads and moms crying about their kids’ safety, and nothing has happened yet, it just tells you the level of pain and agony that is being stuffed down so far in the soul, that sooner or later, it leads some place toxic,” Scott said. “We have to be willing to have a raw conversation about justice in this nation.”

While businesses across the country face property damage and theft due to riots amid the coronavirus pandemic, Scott said he would push for more small business and sector-targeted relief in the Senate’s next coronavirus relief legislation.