The new Congress confronts a week of unrest. 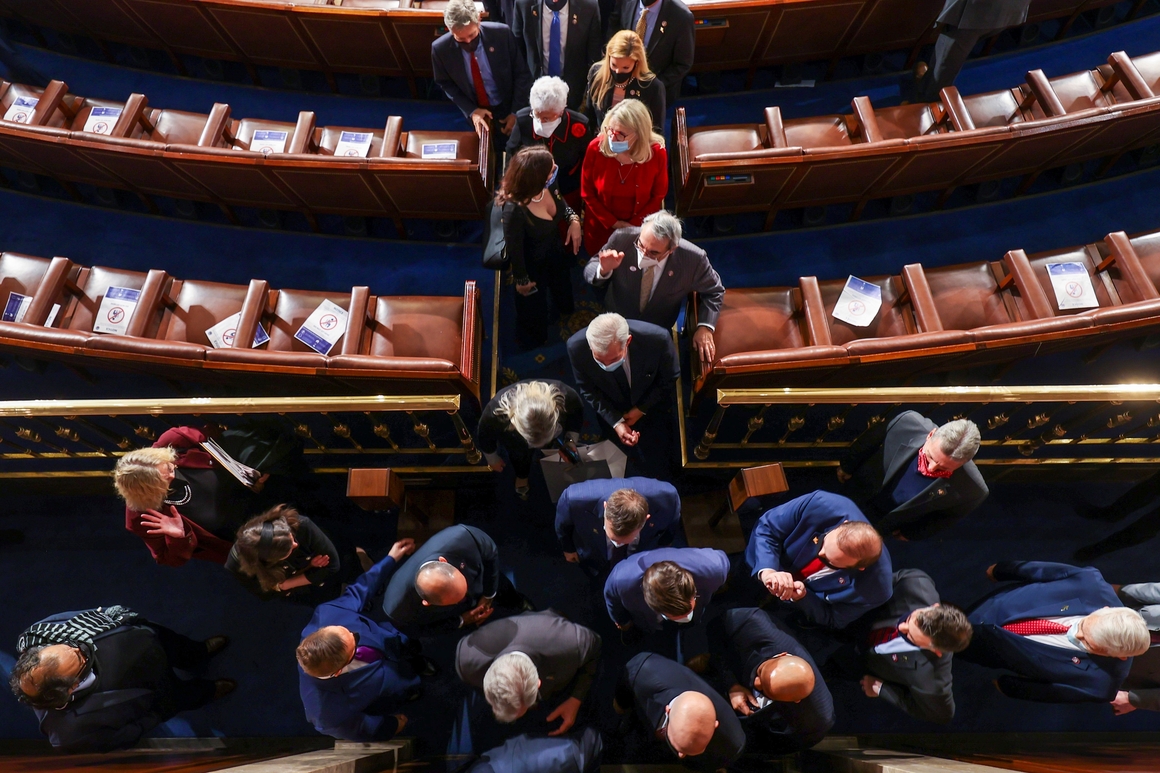 Their first week back in Washington, lawmakers are grappling with an unprecedented mix of dangers on the job: intense pro-Trump rallies that authorities fear could turn violent and a deadly pandemic that has already claimed one of their own.

And that doesn’t include what many in both parties consider an entirely different threat to American democracy — a historic effort by a growing band of Republicans to overturn Joe Biden’s presidential victory on the floors of Congress.

Congressional and D.C. officials are bracing for clashes in the streets on Wednesday, when dozens of GOP lawmakers will launch that doomed attempt to challenge the election results. President Donald Trump has encouraged his hardcore supporters — who have framed Jan. 6 as a battle akin to the American Revolution and encouraged each other to bring firearms — to march in the “wild” protests in hopes of pressuring Congress to keep him in power.

The prospect of violence comes as some Democrats, particularly members of color, have seen an increase in personal threats against them and their offices throughout the 2020 protests.

“Before anybody said anything, I did not plan to be on any street in Washington on Jan. 6,” said Rep. Karen Bass (D-Calif.). “I am very concerned about violence. Frankly, I’m saying that because I’m African American. ... Understand, I’m not saying this as a legislator.”

Trump himself said he plans to attend, along with far-right groups such as the Proud Boys. And several of the president’s most loyal Hill allies and other MAGA world figures are also slated to speak at Wednesday’s “stop the steal” rally.

The unnerving combination of coronavirus and Trump’s threats to subvert the election — not to mention a pair of run-off elections on Tuesday that will determine control of the Senate — has created a tense mood in the Capitol in what has historically been a celebratory occasion: the start of a new Congress. Instead, lawmakers are just hoping to avert disaster.

“I hope democracy doesn’t take too much of a hit this week,” said Rep. Ro Khanna (D-Calif.).

“Every one of us is almost entirely focused on getting through, well frankly, not just Wednesday, through Jan. 20,” added Rep. Dean Phillips (D-Minn.).

“Having spoken to a number of my Republican colleagues, they can’t wait until Jan. 20, either,” he said, adding that he salutes any GOP member who withstands the “threats and pressure” that is pouring into their offices to back Trump.

Many lawmakers and senior aides privately say they’re spooked by the growing safety threats gripping the Capitol this week. Those fears have become so acute that the House’s sergeant-at-arms sent a memo Monday urging lawmakers to traverse the underground tunnel network rather than the public streets — guidance that runs counter to the strategy most members have adopted to limit their risk to the coronavirus across the sprawling Capitol Hill campus.

Because protests are slated to begin early in the day, Sergeant-at-Arms Paul Irving pushed members of Congress to arrive at the Capitol by 9 a.m., four hours before the 1 p.m. session "and to remain on campus throughout the day." Lawmakers and staff are being encouraged to park in garages rather than above ground and to be mindful that the D.C. police intend to enforce "extensive parking restrictions and street closures."

Washington, D.C. Mayor Muriel Bowser has warned residents to avoid the downtown area Tuesday and Wednesday, and issued a public reminder about D.C.’s strict firearms laws. Some lawmakers, too, said they’re considering whether to temporarily avoid their own apartments during that time. The National Guard has even been activated in D.C. to help deal with the planned demonstrations.

Further stoking fears that things could turn ugly, Rep. Louie Gohmert (R-Texas) told Newsmax over the weekend that a court throwing out his lawsuit to overturn the election means “basically, in effect, the ruling would be that you’ve got to go to the streets and be as violent as antifa and BLM.”

Gohmert later posted a statement to Twitter to clarify he does not support violence in any form.

“This is going to get heated,” warned Rep. Tom Reed (R-N.Y.). “I will do whatever I can to calm this situation down and hope all my colleagues recognize our rhetoric can be passionate yet should not be inciteful or derogatory toward any of our fellow citizens.”

READ:  Biden to release his first wave of judicial nominees

Meanwhile, lawmakers are back in the Capitol to usher in the 117th Congress at a time that many consider to be the riskiest for their own health since the pandemic began in March. 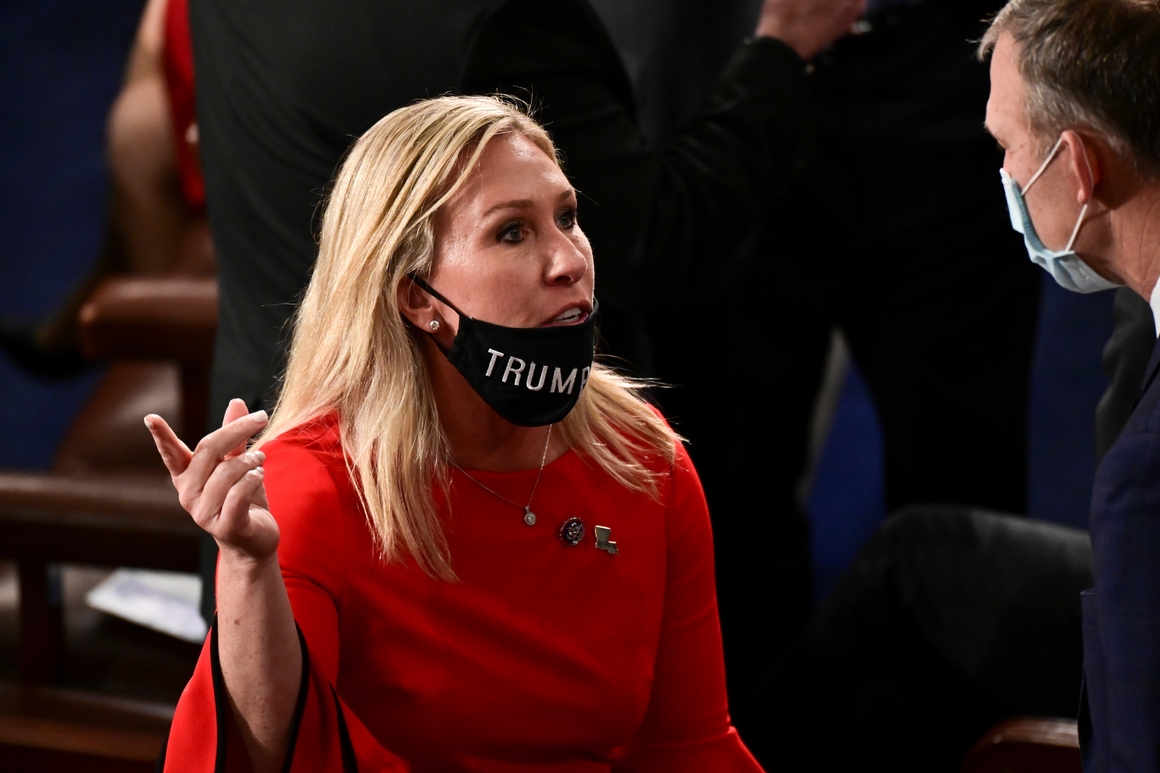 Key parts of Congress’ opening day descended into chaos on Sunday, with hundreds of lawmakers packed on the floor and flagrantly ignoring health warnings. The unruly scene prompted Speaker Nancy Pelosi to send a stern note to lawmakers reminding them of the proper health and safety protocols, which she blamed, in part, on the interruptions from a GOP procedural vote on Sunday that summoned hundreds of members to the floor at once.

It all resulted in a mass swearing-in — which had been unplanned — with hundreds of members packed on the floor.

And at a time when thousands of Americans are dying of coronavirus each day — including Luke Letlow, a recently elected GOP member — anxiety is rising in the House as a handful of members, such as conservative Rep. Marjorie Taylor Greene (R-Ga.), have refused to wear their masks on the floor.

“It’s risky, it’s dangerous, and I would hope that the House leadership addresses that in short order,” said Rep. Anthony Brown (D-Md.), who raised the issue on a Democratic caucus call on Monday. “I’m really incensed about this.”

Several members and senior aides were also furious that potentially infected lawmakers were able to attend the day’s proceedings — voting from a separate, glassed-in area in the House gallery — as long as they were able to provide a recent negative test. Another member, Rep. Kay Granger (R-Texas), announced one day after the floor proceedings that she has tested positive for the virus.

READ:  Consumer prices shot up 0.8% in April as worries escalate

Lawmakers will need to confront the threat of a potential superspreader event again on Wednesday during a joint session of Congress where Republicans will dispute the Electoral College results — forcing hundreds of members to sit in the chamber together for what could turn into an all-nighter if GOP lawmakers object to a series of Biden’s electoral wins.


It’s an extraordinary setting, particularly for the nearly 60 new House members being sworn into Congress for the first time.

“It’s an exciting week, there’s a lot going on,” said Rep. Nicole Malliotakis (R-N.Y.), who won a hard-fought race to recapture a GOP seat, and noted that she’s still working to get familiar with the sprawling Capitol building.

Wednesday’s theatrics will be a rare public display of the widening GOP rift over Trump’s electoral pursuits. Trump’s push to overturn the election results — and his controversial call pressuring Georgia’s secretary of state to do just that by “finding” him more votes — has inflamed intra-party tensions just ahead of the critical Senate races in Georgia.

Trump continued to fuel the divide on Monday, attacking Sen. Tom Cotton (R-Ark.) for not supporting his effort to stay in power and dubbing those Republicans unwilling to challenge Biden’s electoral win as the “surrender caucus.”

Rep. Thomas Massie (R-Ky.) — one of the rare House Republicans who has come out publicly against the anti-certification effort — said he’s been facing intense pressure back home over the vote. Both his office phones and Twitter feed have been lighting up since he announced his position.

“It’s the most consequential vote a lot of my colleagues have taken,” said Massie, who has broken with the president on several occasions.

And while Massie said he isn’t worried about the protests turning violent on Wednesday, he is expecting a large turnout: he said there are busloads of people from his district who are planning to travel to D.C. for the protests.

“I’m probably better off not going to the rallies,” he added.