The gambit was cynical and disruptive, but in the end it didn’t work. 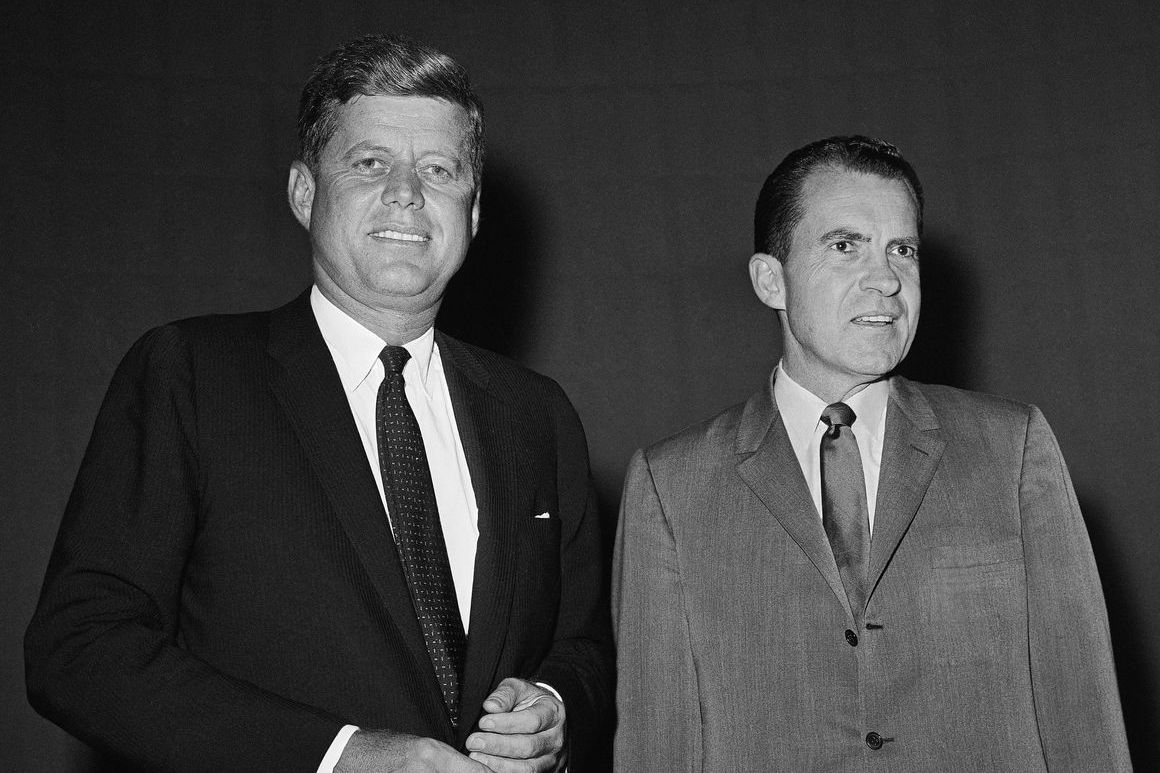 Donald Trump is fanning fears that if he loses the presidential election in November, he’ll try to discredit the vote totals as fraudulent and won’t concede the race. Doing so would amount to a dramatic break from historical precedent, as commentators are noting. But not all of them are getting their history right. Al Gore, we’re reminded, accepted defeat in 2000, despite reason to believe he should have won Florida, and Richard Nixon, we’re told, declined to challenge John F. Kennedy’s razor-thin victory in 1960.

The part about Gore is true. But Nixon did no such thing. In fact, his top aides and the Republican Party, almost certainly with Nixon’s backing, waged a campaign to cast doubt on the outcome of the election, launching challenges to Kennedy’s victories in 11 states. Far from providing a counterexample to Trump, the 1960 election aftermath amounts to one more way in which Nixon, known for his contempt for the Constitution, furnished Trump with a playbook for thinking about political power. And let’s remember that in the end, it didn’t work: While Nixon’s gambit was cynical and disruptive, it went nowhere, suggesting it’s harder to overturn a presidential election result than doomsayers suppose.

The 1960 election was extraordinarily close. Nixon, the sitting vice president, lost the popular vote to Kennedy, the liberal Massachusetts senator, by 113,000 votes of 68 million cast—a hair’s-breadth 0.2 percent margin. In the Electoral College, Kennedy’s margin was a healthier 303-219 (Dixiecrat Harry F. Byrd got 15), but in many individual states the margins were slender as well.

Everyone knew that Chicago Mayor Richard J. Daley, a key JFK ally, ran a powerful Democratic machine. It was perennially suspected of meddling in important races around Cook County. As numbers came in on election night, rumors circulated that Daley had put his thumb on the scales for Kennedy, who took Illinois by a mere 9,000 votes. There were questions about the vote count in Texas, too, where Kennedy eked out victory by 46,000 votes out of 2.3 million cast—and where associates of Lyndon Johnson, Kennedy’s running mate, were also reputed to interfere with the count. (Rumors of having cheated in a tight Senate election in 1948 had given LBJ the nickname “Landslide Lyndon.”) Together, Illinois and Texas had 51 electoral votes. Moving them from Kennedy’s column to Nixon’s would flip the election.

Republicans saw an opportunity. Some urged Nixon to contest the results. In his first memoir, Six Crises, written shortly after the election, Nixon claimed to reject their advice, and a surprising number of biographers have credulously accepted and repeated his claim. But Six Crises is a notoriously unreliable account from a notoriously unreliable narrator. As Nixon speechwriter William Safire noted in his own memoir, Nixon loved nothing more than to have aides tell him to “take the easy path,” so he could look admirable by defying them. He loved giving the impression of forswearing political calculations and following his own lights, even when it wasn’t the case.

In fact, from election night onward, Nixon hedged his bets. As the vote totals came in favoring Kennedy, the vice president pulled back from a full-throated concession. He cagily couched his formal remarks in tricky caveats. “I want Senator Kennedy to know,” he said on television at 4 a.m., “and I want all of you to know, that if this trend does continue, and he does become our next president, then he will have my wholehearted support.” The wording was pure Nixon, leaving himself abundant wiggle room with that little if.

Nixon’s crew recognized that overturning an election result would be an extreme long shot. They often admitted as much to the press. But that didn’t stop them from trying. They calculated that even if they failed, it would still be possible to cast doubt over Kennedy’s victory, imbuing his presidency with a whiff of illegitimacy. This in turn would rally their base voters for future elections.

Throwing their weight behind the effort were three Republican pols who had run his 1960 campaign: Kentucky Senator Thruston B. Morton, chair of the Republican National Committee; Leonard W. Hall, a former congressman and former RNC chair, who had served as the campaign’s “general manager”; and Robert H. Finch, a veteran of California politics who became “campaign director.” Immersed in the plotting, too, was Peter Flanigan, who would serve in 1968 as Nixon’s deputy campaign manager and whom Ralph Nader later called the “most evil” man in Washington.

Morton led the charge. On November 11, just three days after the election, he announced proceedings to question the electoral results in Illinois, Texas and nine other states (Delaware, Michigan, Minnesota, Missouri, New Jersey, New Mexico, Nevada, Pennsylvania and South Carolina). At one point, Morton claimed the RNC had received 35,000 letters and telegrams with anecdotal accounts of fraud. Days later, Hall and Finch deputized staffers to carry out what The Associated Press dubbed “field checks” in eight contested states—essentially, poking around, seeing whether they could find suspiciously pro-Kennedy totals in any precincts. Democrats saw the project as troublemaking. Democratic National Committee Chair Henry L. Jackson called it “a fishing expedition on a grand scale.” Former President Harry Truman called the whispering campaign about rampant fraud “a lot of hooey” and said the Republicans were “just a bunch of poor losers.”

An early wire service report associated Nixon with the plans to contest the results. But soon after, he seemed to realize the damage such an association could cause him, and he publicly distanced himself from the challenges. The Republicans going forward with investigations were acting independently of him, he protested—even though they included all of his top aides. Not everyone believed the story. When, for example, Nixon told Ralph de Toledano, a conservative journalist and friend, that President Dwight Eisenhower was the one urging him to contest the election but that he was refusing to do so, Toledano blanched, knowing the opposite to be the case. “This was the first time,” Toledano later wrote, “I ever caught Nixon in a lie.”

The New York Herald Tribune, a Republican newspaper, also tried to uncover cases of fraud. Reporter Earl Mazo, author of a friendly campaign biography of Nixon the year before and a friend of the president, began digging into reports of malfeasance he had heard about, especially in Texas, fanning the flames of Republican outrage. He unearthed a handful of cases of suspicious mistabulation, raising eyebrows. One precinct, for example, officially included 86 qualified voters, but the final count came out 147-24 for Kennedy. In another precincts, Kennedy won by a seemingly unlikely landslide of 1,145-45. Still, these came nowhere near matching Kennedy’s 46,000-vote lead in the state. (One explanation offered for the confusion was the ballot design. Texas used a “negative ballot” that required voters to cross off names of people they didn’t want to elect, leading to a large number of bad ballots.) Mazo later said Nixon urged him to stop running his stories after the fourth article in his series had run, though by then Mazo’s point had been made. Eventually, a federal judge in Texas tossed out the Republican lawsuits.

In Illinois, meanwhile, Flanigan helped put together a “Nixon Recount Committee.” The group raised $100,000 from donors to wage its fights through November. Republicans also succeeded in getting both a U.S. attorney and a Cook County grand jury to investigate. As Thanksgiving approached, Meade Alcorn, the RNC general counsel, brazenly predicted that Nixon would eventually prevail in Illinois, hinting that the presidency might be within his grasp. Another GOP official told the New York Times, for the same article, that if the Republicans could flip Illinois, they would then consider going “all out to reverse” Kennedy’s “apparent” Electoral College victory—with New Jersey, New Mexico, South Carolina and Nevada cited as possibilities to pick up the remaining electors needed. Democrats worried. “Their people are not out there with lawyers and high-powered accountants for nothing,” one official told the Times.

The following week, Morton made a show of flying into Cook County, hoping to keep the news media’s attention fixed on the recount and the possibility, however remote, of a change in the outcome. The New York Times editorialized in late November, “It is now imperative that the results in each state be definitively settled by the time the electoral college meets.” On December 4, the Times was still treating the election as unresolved. “ILLINOIS’ 27 VOTES REMAIN IN DOUBT,” a headline read. “G.O.P. STILL CHARGING FRAUD IN CHICAGO TALLY.”

The details of the Illinois effort turned on the involvement of Benjamin Adamowski, a Republican Cook County official who had lost his race to a Democrat by 25,000 votes. The close margin meant Adamowski was entitled to a recount. Republicans hoped that investigating Adamowski’s race would uncover incidents of corruption—phony voters, invalid ballots—which could in turn change the totals in the presidential race.

Starting November 29, the Cook County recount continued until December 9. Fortunately for Nixon, the new totals showed that his vote had indeed been undercounted. Unfortunately, the change was tiny. Nixon netted a scanty 943 ballots, far from the 4,500 he needed to flip the state. No one ever proved that the wrong totals resulted from fraud rather than human error—though given the reputation of the Daley machine, the suspicions endured.

After this defeat, Republicans sued in federal court to recount the ballots again, but the judge declined to take the case. As a final Hail Mary, the Nixon Recount Committee appealed to the State Board of Elections, petitioning for it to certify the Republican slate of presidential electors rather than the Democratic one. But the state board, though composed mostly of Republicans, rejected the request. By mid-December, the Nixon group had run out of options. Subsequent academic studies over the years found that while some fraud probably occurred in Illinois, it wasn’t significant enough to have altered the election outcome.

Other states’ projects also unraveled. In New Jersey, Republicans went to court to secure recounts in five counties. But by early December they accepted that those recounts weren’t turning up any major discrepancies and they abandoned the effort. Kennedy ended up winning the state by 22,000 votes.

All along, Nixon and the Republicans pretended the vice president wasn’t involved. But the central role of so many of his topmost aides makes it impossible to credit those protestations. In actuality, Nixon understood the wisdom of keeping his fingerprints off the effort. As he later wrote, plunging into the fray personally would guarantee that “charges of ‘sore loser’ would follow me through history and remove any possibility of a further political career.”

Ironically, a recount did end up changing the vote totals in one state: Hawaii. When the state finally finished counting its votes, on November 16, Nixon led by 141 votes. Given the Republican challenges elsewhere, Democrats called for a recount, which began on December 13. Fifteen days later, a judge ruled that the state’s electors—at first awarded to Kennedy, then reassigned to Nixon after auditing mistakes were found—was rightfully Kennedy’s all along. The result of all the Republican lawyering and politicking had been a net loss of three electoral votes. “The recount in the one state the Democrats asked for turned from Republican to Democrat,” Kennedy press secretary Pierre Salinger noted dryly, as if suppressing the temptation to gloat, “and nothing happened at all in the 11 states that they were going to seek recounts in.