Unlike many other federal agencies, the IRS does not ask about race or ethnicity. 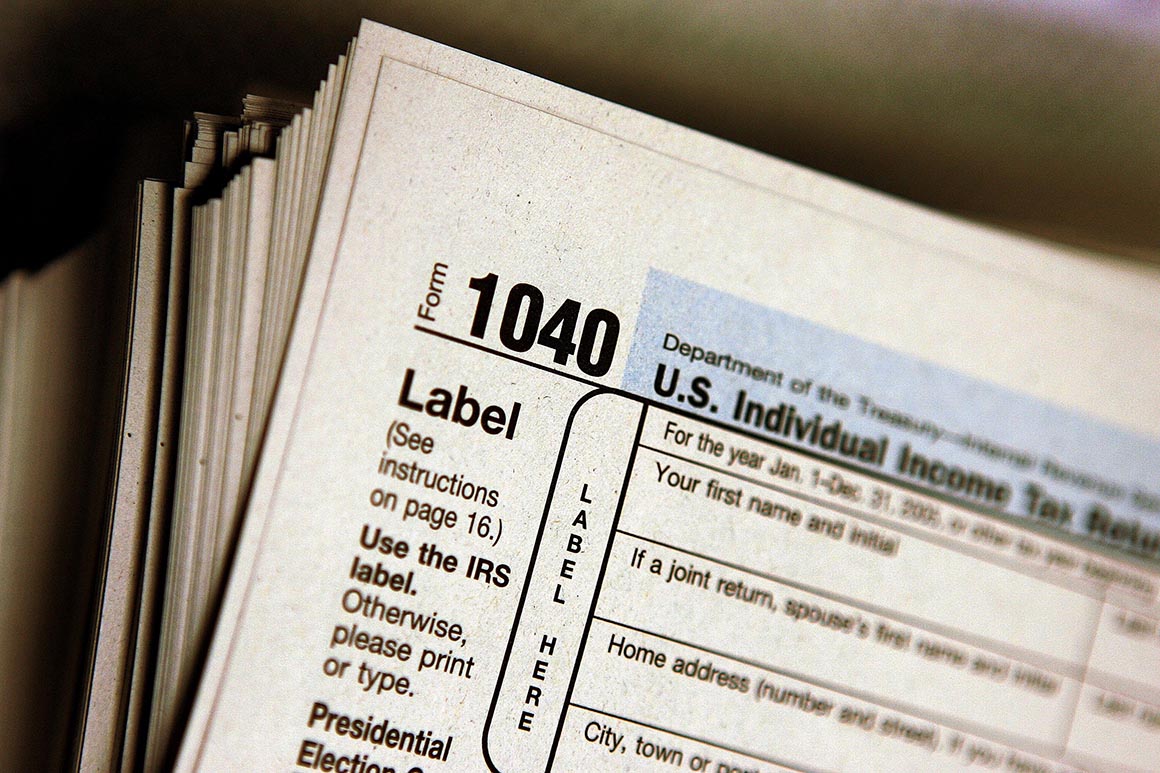 The IRS knows a lot about you.

It knows how big your paycheck is. It knows the name of your spouse, and how much you still owe on your mortgage. It knows if you’ve tried to cheat on your taxes.

But one thing it can't tell from your tax return is your skin color. Unlike many other federal agencies, the IRS does not ask about race or ethnicity.

Now some want to change that, and an executive order that President Joe Biden issued recently could provide an opening.

Advocates of collecting the information say the agency’s colorblindness obscures inequities built into the tax code. Though the tax system can appear to treat everyone equally, not everyone can benefit equally from tax breaks. Exposing those inequities could prompt lawmakers to make changes that would level the playing field.

Others, however, including former agency officials, worry that asking about race could have unintended consequences — such as stoking fears about how the data will be used or driving some groups, like undocumented immigrants, further underground.

There's no question that disparities exist.

Take Section 121, for example, which allows people selling their homes to skip paying taxes on up to $500,000 in gains. Black homeowners are less likely than white people to take advantage of the break, said Dorothy Brown, a law professor at Emory University, because they are less likely to make money when they sell.

If the agency started collecting data on race, it would become a lot clearer who is benefiting from breaks like that one that pock the tax code.

“You would find provision after provision where white taxpayers are more likely to benefit than black taxpayers,” Brown said.

Some want to know if the IRS is subjecting African-Americans to a disproportionate amount of scrutiny, pointing to the relatively high number of audits it conducts of Earned Income Tax Credit claimants.

One possibility for gleaning the information: have the IRS begin asking taxpayers to identify their race when they do their taxes, although some say the agency should use more indirect methods.

The notion that there should be a racial component to tax data has long been debated by academics. But with the increased attention nationally to racial inequities in the wake of George Floyd’s death, the idea is now getting a foothold in the government.

Tax writers in Congress are increasingly interested in the issue, and Biden has set up a working group to examine how government data generally can be better parsed by race and other demographic factors.

It has the potential to be a profound change that could affect how tax policy is decided in Congress, how the IRS goes about enforcing the code and how the tax system is viewed by the public.

But some IRS veterans are horrified by the idea.

They say some taxpayers would be alarmed if the agency starts asking them about race and predict it would give birth to conspiracy theories that the IRS only wants to know so it can target particular groups for harassment.

At the same time, some say, it’s possible that some people at the agency would in fact use the information to discriminate against minorities.

And if tax data could be broken down by race, the information — assuming it is made public — could be weaponized, with potentially ugly debates over who is paying their fair share.

“This sends a chill down my spine,” said one former top IRS official, speaking on condition of anonymity because of the sensitivity of the topic.

The IRS is unusual among federal agencies in never asking about race — the only information it requests is what it’s required by law to ask and what it needs to calculate people’s tax bills.

The problem with that, some say, is that lawmakers have added so many special tax provisions to the code that the tax system doubles as a giant social welfare program. Some provisions ameliorate inequality while others embed and compound it. And some are so big their annual costs top the entire budget of some federal agencies.

Given all of that, the government should be tracking who is getting what, says Jeremy Bearer-Friend, a former tax aide to Sen. Elizabeth Warren (D-Mass.) who now teaches at George Washington University’s law school.

“We lean on our tax code for distributing billions of dollars in benefits,” he said. “The public deserves to know where those funds flow.”

“If we care about racial inequity, that information is relevant.”

Academics have documented racial inequities in the code on their own, such as by matching available tax information with other data produced by the government. Often, inequities occur because the value of tax breaks climbs with income, and white people on average have higher earnings than those who are Black or Hispanic.

To take advantage of the mortgage interest deduction, for example, you need to have been able to afford to buy a home in the first place. And because the deduction shields income from tax, it becomes more valuable as earnings increase.

Or take the child tax credit.

For many years, it was linked to how much people earned — it functioned like a wage supplement, becoming more generous as income increased. Some people were too poor to claim the credit, and academics say those people were disproportionately Black and Hispanic. (Democrats’ stimulus package, signed into law last week, erased the links to work so that everyone now gets the same credit up to certain income limits.)

But it’s not just income that can drive inequities. It can also be where people happen to live or work or other factors.

Black homeowners are more likely to sell their homes for a smaller gain or at a loss compared to white people, said Brown, the Emory professor, because there is less demand to live in predominantly black neighborhoods. That means they’re less likely to be able to tap the exclusion for gains on home sales. At the same time, there isn’t a deduction available for people who lose money selling their homes.

And white people are more likely to have jobs that include health and retirement benefits, which are heavily subsidized by the tax system.

Elsewhere in the code, there is a provision that allows people to skip paying taxes on settlements they receive from their employers — but only if those payments are for physical injuries. Awards for emotional injuries such as racial discrimination do not get the same tax-free treatment.

That could potentially scramble the politics of how lawmakers dole out tax goodies, by making it harder to approve breaks that disproportionately benefit one group or another.

The issue has gotten the attention of some lawmakers.

“It’s important that Congress look at how the tax code fuels racial wealth inequity,” said Sen. Sherrod Brown (D-Ohio), who sits on the tax-writing Finance Committee. “We must work to find ways to make the tax code – and the IRS’s administration of it – more equitable and just for Black and brown people in this country.”

Biden issued an executive order in January on racial inequity that created an interagency Equitable Data Working Group to tackle the issue. “Many federal datasets are not disaggregated by race, ethnicity, gender, disability, income, veterans’ status, or other key demographic variables,” the order said. “This lack of data has cascading effects and impedes efforts to measure and advance equity.”

Among the members of the group: The Treasury Department’s assistant secretary for tax policy. Biden’s pick for that job, Lily Batchelder, has argued that taxes on inheritances should be hiked because the current tax treatment disproportionately benefits white people.

READ:  Is Cuomo wounded enough to take down?

A Treasury Department spokeswoman did not respond to a request for comment.

But there are downsides are well.

Asking about race would likely unnerve some taxpayers and could hurt tax compliance. For example, some predict filing by undocumented immigrants — who are required to pay taxes, even if working illegally — would plunge because some would fear the government would use the information to track them down and deport them. (In fact, the IRS does not share information with border enforcement officials.)

Some say it would add a volatile new element to tax audits, which could lead to IRS agents being accused of singling out minorities.

At the same time, with more than 70,000 employees, some say it would probably only be a matter of time before some IRS auditors actually did use the information to discriminate.

Others say the exercise is unnecessary because the government already produces extensive data parsing tax provisions by income, which can be used to infer which groups are benefiting from them the most.

“You don’t have to know the race of 330 million Americans to come to some conclusions about racial impact,” the former IRS official said.

There are a number of ways the IRS could cull more information about race.

It could simply ask people to identify their race or ethnicity on the 1040 tax form.

It could also do it more indirectly, such as by comparing tax data with other government information. The Census Bureau, for example, knows the racial makeup of geographic areas, and the IRS could compare that with tax returns filed in those places.

There are other options, especially when it comes to looking at who gets audited. Lawmakers could ask independent inspectors general to examine a sample of tax returns for indications of bias. Most IRS decisions about who gets audited are actually made by computers, using algorithms that identify tax returns that seem unusual, and the agency could reexamine how those filters work.

Some outside groups aren't waiting for the government to act.

For instance, the Tax Policy Center, which produces widely noted analyses of politicians’ tax proposals, is trying to figure out how to incorporate race into its own work. The effort is still in the early stages, said Aravind Boddupalli, and the group's examining how it could do it accurately.

“We’re still in the preliminary steps,” said Boddupalli, a research analyst there. “We recognize there’s a need for more information about how tax policy intersects with racial equity."

"I think there’s some cautious optimism about doing more work on this.”