The court’s new conservative majority will have an opportunity to reconsider the landmark decision legalizing abortion nationwide. 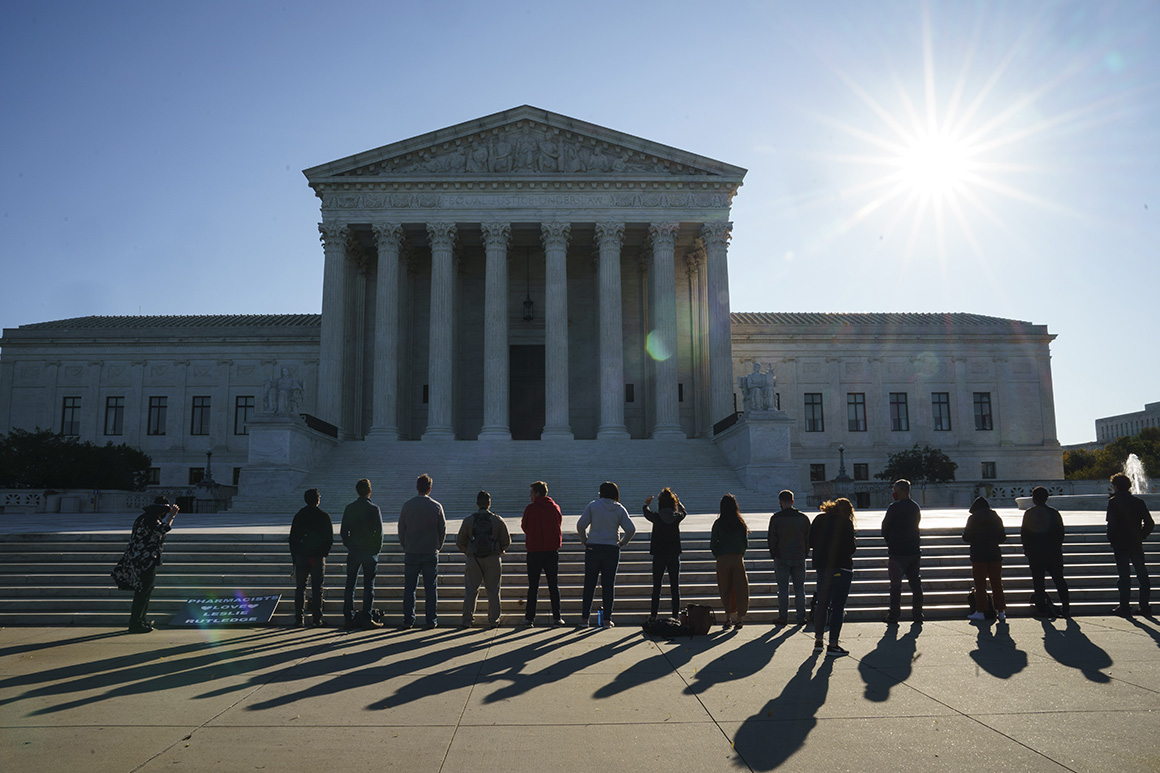 The Supreme Court announced on Monday that it will reconsider the right to an abortion it established almost 50 years ago, agreeing to review Mississippi’s ban on the procedure after 15 weeks of pregnancy.

The court’s decision to take a case directly challenging Roe v. Wade, the landmark 1973 decision that legalized abortion nationwide, suggests that the court’s new 6-3 conservative majority is ready to eliminate or, more likely, curtail the right to terminate a pregnancy.

In a one-line order, the court said it will review just one question that cuts to the heart of Roe: whether all bans on abortion before a fetus can survive outside the womb are unconstitutional.

The Supreme Court will likely hear arguments on the case in the fall, meaning a ruling could come down in summer 2022 — just a few months ahead of midterm elections that will decide party control of the narrowly divided House and Senate. The decision to take the case also sets up a clash between a new presidential administration supportive of abortion rights and red states intent on limiting or banning the procedure outright.

Since the Mississippi ban on virtually all abortions after 15 weeks of pregnancy was enacted in 2018, it has been blocked by lower courts that have cited Roe’s viability standard. Most medical experts believe viability occurs around 24 weeks of pregnancy.

Mississippi was a part of a wave of Republican-leaning states that passed bans on abortion early in pregnancy in recent years, knowing they would be rejected by lower courts — but hoping they would provide the Supreme Court with the opportunity to revisit the Roe decision. The addition of Justice Amy Coney Barrett to the Supreme Court last fall expanded the bench's conservative majority, raising expectations that the nation’s highest court would curtail abortion access.

READ:  Opinion | Will a Boycott Knock Tucker Off the Air? Don't Count on It.

"States should be allowed to craft laws that are in line with both public opinion on this issue as well as basic human compassion, instead of the extreme policy that Roe imposed," said Jeanne Mancini, the president of March for Life and a former George W. Bush administration health official.

Abortion rights advocates meanwhile renewed warnings that a decision gutting Roe could set off a chain reaction in conservative states. Nearly a dozen states, including several in recent years, have enacted so-called trigger bans outlawing all abortions if Roe is overturned.

“Alarm bells are ringing loudly about the threat to reproductive rights," said Nancy Northup, the president of the Center for Reproductive Rights, which is representing the Mississippi abortion clinics challenging the state's ban. "The consequences of a Roe reversal would be devastating."

Before taking the Mississippi case, the Supreme Court in recent years has largely shied away from abortion-related lawsuits, to the frustration of some conservatives on the bench and anti-abortion advocates aligned with former President Donald Trump. While the court recently took another abortion-related case out of Kentucky, the justices during those arguments will focus only a procedural question rather than consider the constitutional right to terminate a pregnancy.

Accepting the Mississippi case indicates the justices could be receptive to other challenges that could result in new curbs on the procedure. More than a dozen abortion-related lawsuits are currently one step away from Supreme Court review, including state bans on surgical abortion methods and bans based on certain reasons for terminating a pregnancy, such as a fetal abnormality.

This year has seen a new wave of state legislation targeting abortion, with hundreds of bills introduced that could limit how, when and where people can terminate a pregnancy. Several of those bills have already been signed into law and are being challenged in lower federal courts.

The Supreme Court justices for months weighed whether to take the Mississippi case — an unusually long time. They discussed the case more than a dozen times in closed-door conferences before ultimately announcing Monday that they would hear the case.

The justices refused, however, to hear arguments on two other questions Mississippi asked them to consider: whether abortion providers have standing to challenge laws on behalf of their patients, and whether courts should scrutinize whether an abortion restriction has any health and safety benefits.

Justices Clarence Thomas and Samuel Alito in recent years have led their conservative colleagues in arguing for a rollback of abortion rights. Anti-abortion groups who backed Barrett’s nomination said they hope she will join them and support overturning Roe.

While Barrett sidestepped questions during her confirmation hearings about whether she would rule against Roe, she offered she does not consider the decision a “super-precedent” that the court could never overturn.