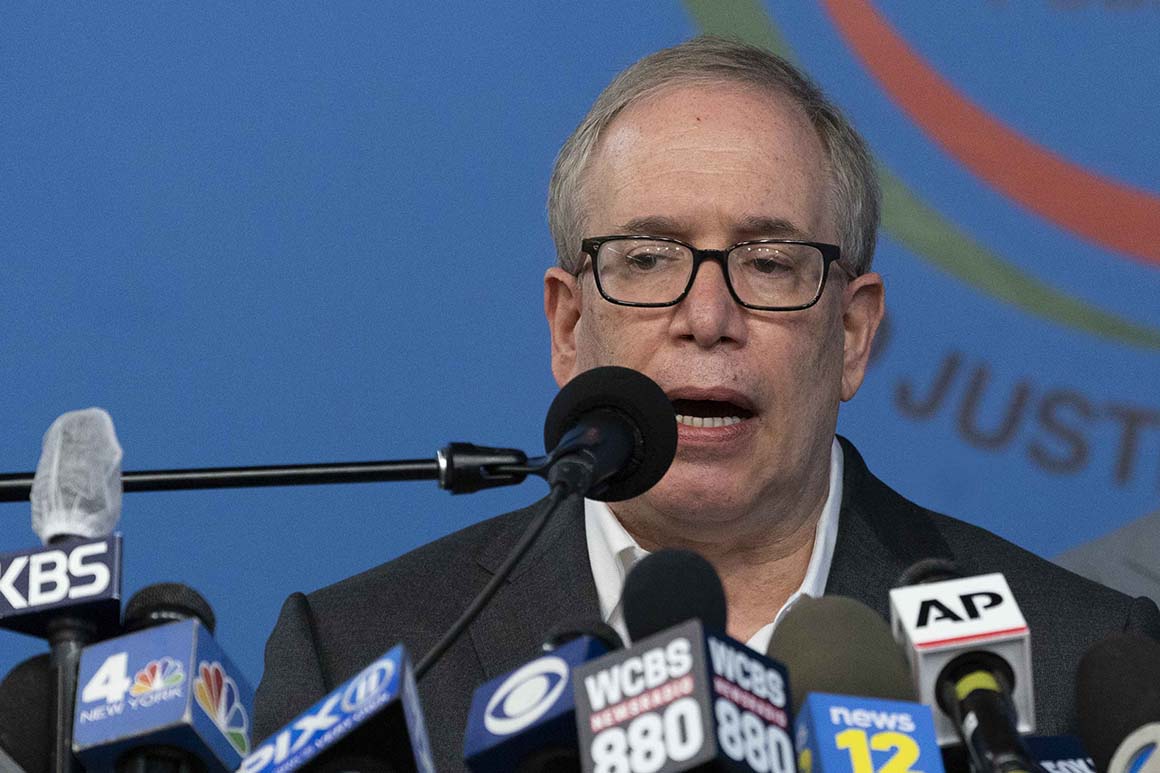 Two days after city-based lobbyist Jean Kim came forward with allegations Stringer groped her in a taxicab — an account he has vehemently denied — progressive backers, some of whom had flanked him from the start of his campaign, walked away.

The Working Families Party, which had ranked Stringer first in its three-way endorsement, yanked its support Friday afternoon in a statement that lumped the city comptroller in with a “culture of sexual harassment” pervasive in New York politics. The news was first reported by POLITICO.

“Jean Kim shared her experience of sexual assault and Scott Stringer failed to acknowledge and consider his responsibility for that harm,” the group said in a statement, adding it would throw its support behind the candidates it had previously ranked second and third — Dianne Morales and Maya Wiley.

Then a group of lawmakers, whose endorsements Stringer had built his campaign upon, announced they could no longer stand with him either.

“We are rescinding our endorsement of Scott Stringer’s mayoral campaign,” is all the legislators wrote. They followed state Sen. Jessica Ramos, an enthusiastic Stringer supporter who told POLITICO in an emotional interview Wednesday night that she was concerned his weakened candidacy would embolden the candidacy of Andrew Yang.

READ:  Dominion Voting sues Fox for $1.6B over 2020 election claims

Sunrise Movement NYC, an environmental group, also pulled its endorsement a day after Food and Water Action shut down a PAC it had launched to promote the Stringer campaign.

Shortly before Friday’s news went public, Stringer issued a statement portending the loss of support and vowing to march on.

"I understand that this is a difficult moment for my supporters, and I know that some of them will feel compelled to withdraw their endorsement of my candidacy," he said. "This campaign was always going to be about the people. I've received a lot of support on campaign stops over the last two days, and I'm going to be campaigning in every neighborhood, in every borough for the next two months.”

“I look forward to seeing my opponents on the campaign trail and at the debates,” he added.

Some supporters are sticking by his side, as his team continues to insist Kim is fabricating her story — an assertion they have sought to bolster by poking holes in her account. Stringer has said she was a peer and a campaign volunteer to his public advocate race in 2001, not an intern as she originally stated. They pointed out that she donated to his campaigns subsequent to the alleged assault. And they produced copies of petitions for Yang that she handed out — petitions Kim said she was carrying for another candidate who appeared on ballots topped by Yang.

“I am not interested in pushing anyone into the mayor’s office. My purpose is to speak the truth and for Stringer to be held accountable for his actions,” Kim said in a statement issued by her attorney, Patricia Pastor. “I am not surprised at all by his efforts to discredit me. It is exactly what I expected him to do. Lie, attack and retaliate.”

READ:  Who took down the CDC’s coronavirus data? The agency itself.

Assemblymember Linda Rosenthal and City Council Member Mark Levine, both Manhattan Democrats, have not pulled their endorsements, and several of Stringer’s backers predicted he would remain popular among his base on the Upper West Side of Manhattan. Neither Rosenthal nor Levine responded to requests for comment on Friday.

The United Federation of Teachers and Rep. Jerry Nadler, a mentor to Stringer, have also yet to rescind their backing — further evidence his longtime allies are standing by his side as his newer coalition splinters.

The Working Families Party was a boon for Stringer’s credibility among young, racially diverse progressives whom he counted as critical to victory in the June 22 primary. Receiving its backing as a 60-year-old white male career politician — ahead of Morales and Wiley, both women of color — demonstrated his political savvy.

But as party officers and lawmakers weighed how to handle the allegations over the past two days, they grew troubled by his efforts to discredit Kim, according to several people involved in the talks.

“The way they handled it had a big impact on peoples’ response,” said one person familiar with the legislators’ decision. “You can’t just attack. You can’t do that. … Maybe 100 years from now we’ll have reached the point where there doesn’t have to be a presumption [of guilt.] But we’re not there yet, for good reason.”

The Working Families Party came to its conclusion during a Zoom call among its officers on Friday. There was mostly agreement about the action to take, but some debate about whether to do it this week or wait to see how the story continued to unfold, according to one person familiar with the talks.

“People felt disappointed with the way that he responded,” a different person said.