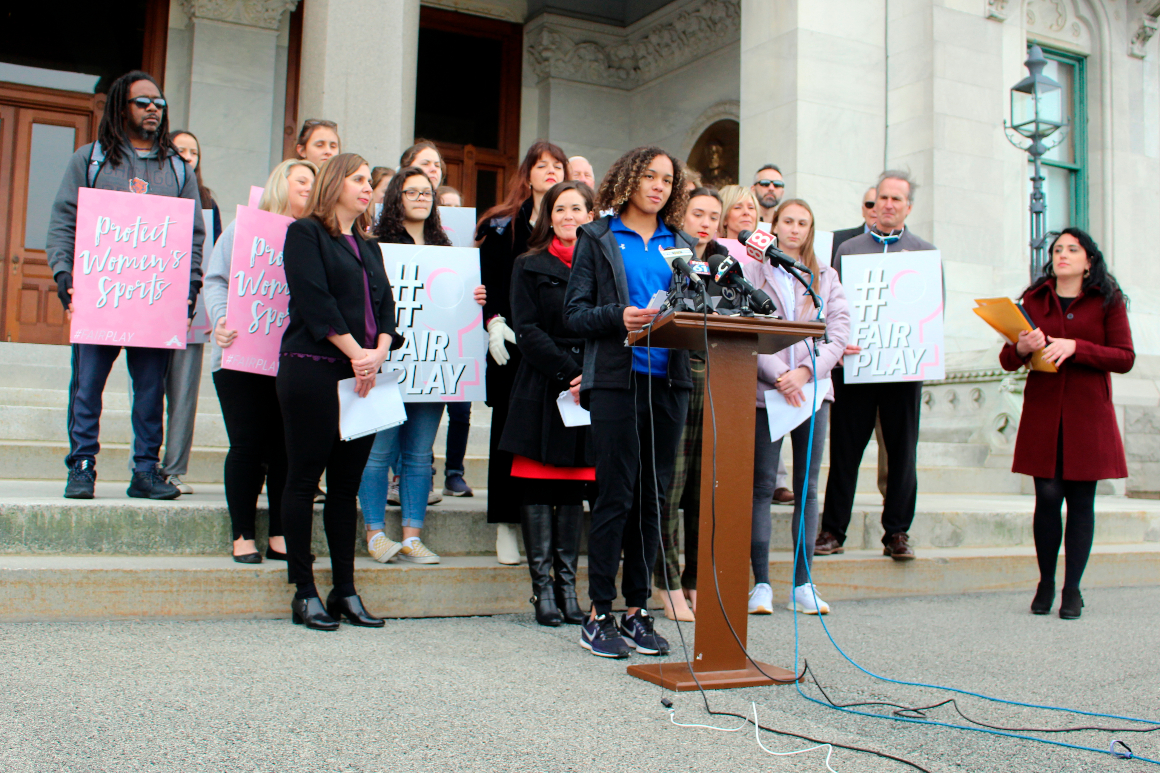 Lawmakers in at least six states plus Congress this month introduced bills aimed at limiting opportunities for transgender athletes, hoping to curb rights for the same group of people for whom President Joe Biden just restored military service access.

The raft of legislation is intended to keep transgender female athletes from competing on sports teams — in elementary school through college — that don’t match their sex assigned at birth. The effect of most of the measures would be to keep people assigned male at birth from competing in girls’ sports.

Supporters of such limitations had a champion in the White House with President Donald Trump, who rolled back protections for transgender people that President Barack Obama had created. One of Biden’s first actions after being inaugurated was to issue an executive order saying that a court case about transgender rights applies to Title IX, a federal education law that prevents discrimination based on sex.

Transgender rights supporters say that even if legislation has little chance of success, it has a chilling effect and can invite attacks on individuals. The American Civil Liberties Union has vowed to challenge any anti-transgender student athlete law that is passed.

Lawmakers in Kentucky, New Hampshire, North Dakota, Oklahoma and Tennessee have introduced bills, and possibly more are in the works, according to the ACLU. The Montana House on Monday passed its bill, H.B. 112, and it will head to the Senate this week, the Helena Independent Record reported.

"While bills attacking trans youth have no chance of passing in the U.S. House, the rhetoric behind them emboldens political attacks on trans youth that are moving forward in Montana, South Dakota, North Dakota and potentially other states," said Chase Strangio, deputy director for trans justice with the ACLU, in a statement to POLITICO.

"Our courts have been clear — federal civil rights laws protect transgender people, including in our schools," Strangio added. "Trans students belong in our schools and lawmakers that pass these political attacks on trans youth will see the ACLU in court."

Key context: In 2020, lawmakers introduced 20 bills that sought to ban transgender people from participating in athletics, according to the ACLU. The bills also follow legislative action in Idaho, which was the first state to enact a law that bans transgender student athletes from women’s sports teams. The law is being challenged in federal court by the ACLU.

The Trump administration’s overhaul of Title IX also played a role in court challenges, as the administration said that the rule does not extend to transgender females playing on women’s sports teams. Trump’s Justice Department played an active role in defending the Idaho law.

“Allowing biological males to compete in all-female sports is fundamentally unfair to female athletes,” former Attorney General William Barr said in a statement. “Under the Constitution, the Equal Protection Clause allows Idaho to recognize the physiological differences between the biological sexes in athletics.”

In the courts: Two cases are making waves on the transgender student athlete policy front this spring, one in Idaho and another in Connecticut.

Hecox v. Little: In August, a federal judge temporarily blocked an Idaho law that bars transgender women from participating in school sports and requires testing if an athlete’s sex is in question. The lawsuit was filed on behalf of track athlete Lindsay Hecox, who is transgender and says the law violates the equal protection and due process clauses of the 14th Amendment and the unlawful searches and seizures clause of the Fourth Amendment.

Lawyers on behalf of the state appealed the decision to the 9th Circuit Court of Appeals, and a ruling is expected this spring.

Soule v. Connecticut Association of Schools, Inc.: The Alliance Defending Freedom is suing Connecticut’s high school sports authority and five school boards over a state policy that allows students to play on teams that match their gender identity. The group says the policy violates Title IX, and had the backing of DeVos' Education Department. The department had threatened the sports authority and school boards with legal action or a loss of funding because it determined that the transgender athlete policy violated Title IX.

A hearing for the case is set for February.

In Congress: Last week, Rep. Greg Steube (R-Fla.) introduced the "Protection of Women and Girls in Sports Act of 2021," which would make it illegal for schools that receive federal funds to allow students who were assigned male at birth to participate on women's sports teams. It also stipulates that sex is "recognized based solely on a person’s reproductive biology and genetics at birth."

Steube's bill is a continuation of his efforts to "guarantee that biological women are not forced to compete against biological men at all levels of athletic competition." It also pushes forward legislative action in Congress made in the fall.

Other bills that were recently introduced have not advanced, but they set the marker for the new session.

The Protect Women’s Sports Act, H.R. 8932 (116), introduced by former Rep. Tulsi Gabbard (D-Hawaii) and Rep. Markwayne Mullin (R-Okla.), would prevent students who are assigned male at birth from participating on girls' sports teams. Under the measure, schools that don’t comply would lose access to federal funding.