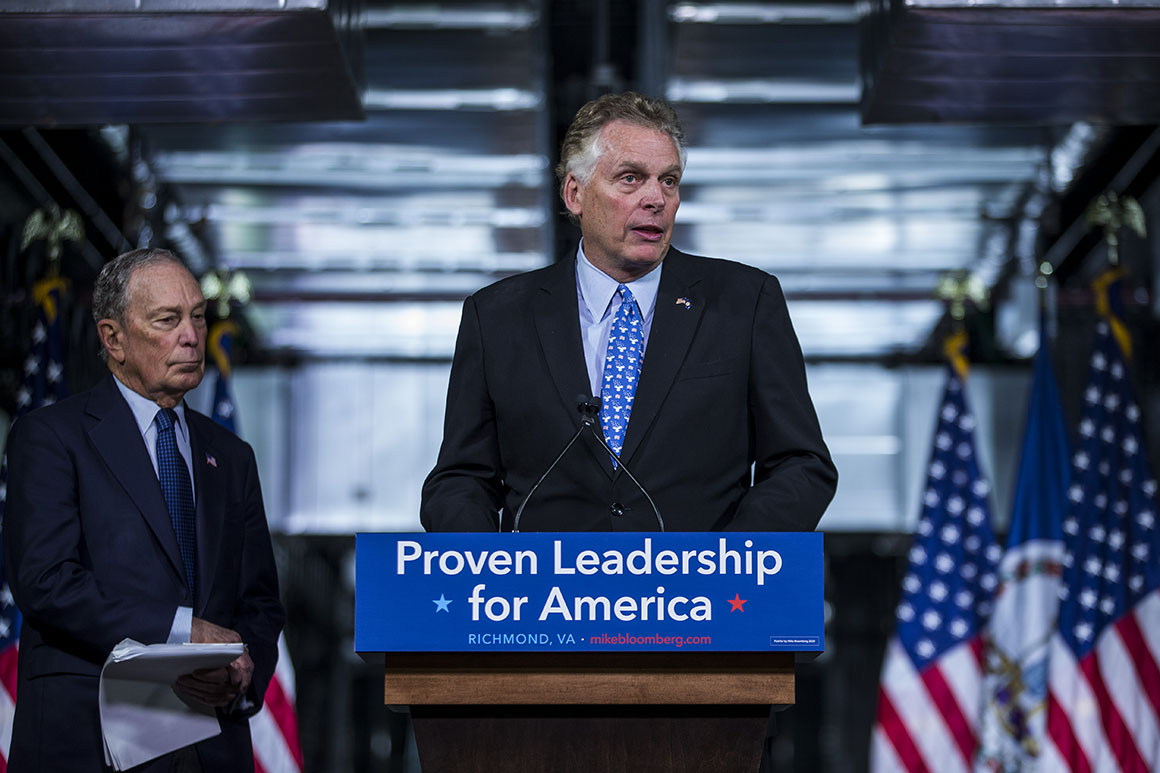 The field of Democratic hopefuls for governor in Virginia is historically diverse. But that very diversity and its crowded size are causing a conflict.

That’s because the outside groups formed to support women and candidates of color are still mostly on the sidelines. And it’s leaving former Gov. Terry McAuliffe, a white man and longtime Democratic insider, as the overriding frontrunner with less than three months until the primary.

Normally, these groups, which include well-funded political action committees in Democratic politics, would throw all their support and money behind candidates like Jennifer Carroll Foy or Jennifer McClellan, two African American legislators who would bring diversity to an office that has never been occupied by a woman, and only once by a Black man.

Instead, they're grappling with divided loyalties and in many cases still on the sidelines, or highlighting the diversity without providing tangible help to a specific candidate.

“Our intention was to lift both women because so many of us have been around the block here in Virginia politics,” said Susan Platt, who founded Her Excellency VA to support and elect a woman governor. “We know each of them. … We didn't want it to be a ‘this one or that one.' We wanted to lift both.”

But thus far, neither Black woman has broken out of the pack chasing McAuliffe, and these groups’ continued ambivalence comes as the race enters a critical period. McAuliffe remains the highest fundraiser among Democrats in the running and has support from many of the commonwealth’s most prominent Black political leaders, including the top Black woman leaders in both chambers of the statehouse. His stature has ignited a new debate around power dynamics in the race, as his opponents allege he is using strong-arm tactics to consolidate support.

In one instance, Carroll Foy, the second-highest fundraising Democrat in the race, lost her endorsement from a state delegate, Clint Jenkins, to McAuliffe last week. Her campaign alleges that his decision to do so was driven by pressure from McAuliffe allies.

The disputed episode, the talk of Virginia politics over the past week, underscores the delicate racial dynamics at play in the June 8 primary. McAuliffe, leading in the polls, has the support of many of the commonwealth’s top Black political figures, despite the candidacies of Carroll Foy, McClellan and Lt. Gov. Justin Fairfax.

A senior aide to Carroll Foy shared details with POLITICO of a conversation between Jenkins and Carroll Foy in which Jenkins claimed that he was feeling “a lot of pressure” from his home district and “the Hampton Roads delegation” to switch allegiances — an allusion to the influential southeast corner of the commonwealth, where state Senate President L. Louise Lucas, a co-chair of McAuliffe’s campaign, wields influence.

In a statement to POLITICO, Lucas denied that she was involved in any campaign to pressure Jenkins to switch his endorsement.

“I have worked my whole life to build up my community, starting as a 21-year-old shipbuilder at the Norfolk Naval Yard to proudly serving as the first Black woman to lead Virginia's Senate,” she said in the statement. “It is hurtful that these false allegations against me continue.”

Jenkins did not respond to a request for comment. In an interview with the Virginia Scope, he said he was not pressured into switching allegiances in the campaign and that he told the Carroll Foy campaign that no one from the McAuliffe campaign influenced his decision.

Still, some state leaders are — mostly privately — describing what they perceive as unfair dynamics at play.

“We have a race now with two powerful, Black qualified women running for the highest seat in Virginia. And the most powerful Black elected officials are not supporting them,” said one state delegate who spoke on the condition of anonymity. “It was really a power play.”

Black women, who have been lauded for their role in Democratic politics for turning out in high numbers and organizing for candidates on the left, have historically struggled to break through to the top levels of political power. No state has ever elected a Black woman governor, and Virginia has only once elected a woman to statewide office: former state attorney general Mary Sue Terry, who is white.

It’s why, when the groups were asked why have not made an outright endorsement, they cited the historical significance of two Black women candidates. Some have organized on behalf of both candidates and are acting as watchdogs in the race.

“[Black women are] asked for our vote, but we keep getting blocked,” said Aimee Allison, founder and president of SheThePeople, which supports women of color running for office. “And we don't call out the structural reasons for that. And we don't look at what's happening in the primaries. Virginia is an example of that.”

McAuliffe, who served one term after being elected eight years ago, boasts the highest name recognition of candidates in the field. The former Clinton ally and DNC chair has fundraised for a number of Virginia candidates in the past, further raising his profile when he launched a second gubernatorial bid in December. Some of the groups who have not made explicit endorsements in the race were critical of McAuliffe’s decision to enter at its onset, given the fact that two Black women had already declared their candidacies.

More, this is not the first time the Carroll Foy campaign has bumped heads with McAuliffe or his allies. Carroll Foy, who has painted McAuliffe as an out-of-touch old guard politician, tweeted an op-ed she wrote about ending corruption in politics and alluded to a now-concluded federal investigation of McAuliffe’s finances. Lucas responded to the tweet, calling it a “repeat of Republican smears.”

In addition to Her Excellency and SheThePeople, EMILY's List — which supports Democratic women who back abortion rights — has not yet made an endorsement, which is not uncommon when there is more than one woman in the field. Carroll Foy was on the shortlist for its Giffords Rising Star award, and the organization frequently shares news of her campaign on its website. Representatives from EMILY's List did not respond to a request for comment.

Higher Heights, another group supporting Black women running for office, has declined to take sides in the primary. It added the contest to its list of “Races to Watch” in February, highlighting information about both Carroll Foy and McClellan and encouraging supporters to “make an informed decision to support these incredible candidates.” Glynda Carr, president and co-founder of the PAC, said the group does not have plans at this stage to weigh in further.

There are some groups willing to take sides, though they are divided. New Virginia Majority, a PAC that supports people of color, has endorsed McClellan, while the Feminist Majority Equality PAC announced its support for Carroll Foy on Tuesday.

Quentin James, president of the Collective PAC, which supports Black candidates running for office, said it is “very much our intention” to make an endorsement ahead of the gubernatorial primary. The group endorsed a slate of local candidates in Virginia on Thursday.

“We don't feel as though we have the privilege to sit on the sidelines in those races, especially when you have so many amazing candidates,” James said. “We are actively researching and speaking with the Black candidates who are running in Virginia, and we hope to be able to make a decision before those primaries.”

READ:  A pro-Trump scam PAC wants $100 donations to get him back on Twitter

McClellan, a state senator, acknowledged some outside pressure in a recent interview to leave the legislature in order to raise more money; lawmakers and elected officials were forbidden from fundraising during the recently concluded legislative session. Her supporters point to the legislation she's sponsored over the last few months — including a bill to protect reproductive rights and another to remove a segregationist statue from the state's Capitol Square — as boons to her campaign and evidence of her ability to govern.

Carroll Foy, meanwhile, resigned her seat in the state House last December, allowing her to raise money during the beginning of this year.

"I do think it's important for groups who tend to endorse in races to let their constituencies know, from an organizational standpoint, who they believe is the best," said state Del. Jeff Bourne, a McClellan endorser who succeeded her in the state House. "I think it helps their members. I think it helps inform voters."

Allies of both women maintain that, while McAuliffe has a fundraising advantage and outside groups have not swept in, the race remains anyone's to win. Both of the women have gained support from a number of Black leaders in the state: McCllelan has endorsements from more than two dozen Black Virginia leaders, rivaling McAuliffe in the Hampton Roads and Richmond regions. Phyllis Randall, chair-at-large of the Loudoun County Board of Supervisors and a McClellan supporter, expressed her excitement at what both of their candidacies portend for changing faces of power in the commonwealth.

“Women are getting involved. But also, communities of color are getting more involved for the first time — like really, really involved in Virginia,” Randall said.

Still, recent polling suggests there are a large number of undecided voters in the state — a populations that all campaigns are looking to close in on, particularly as the next round of campaign finance filings come due.