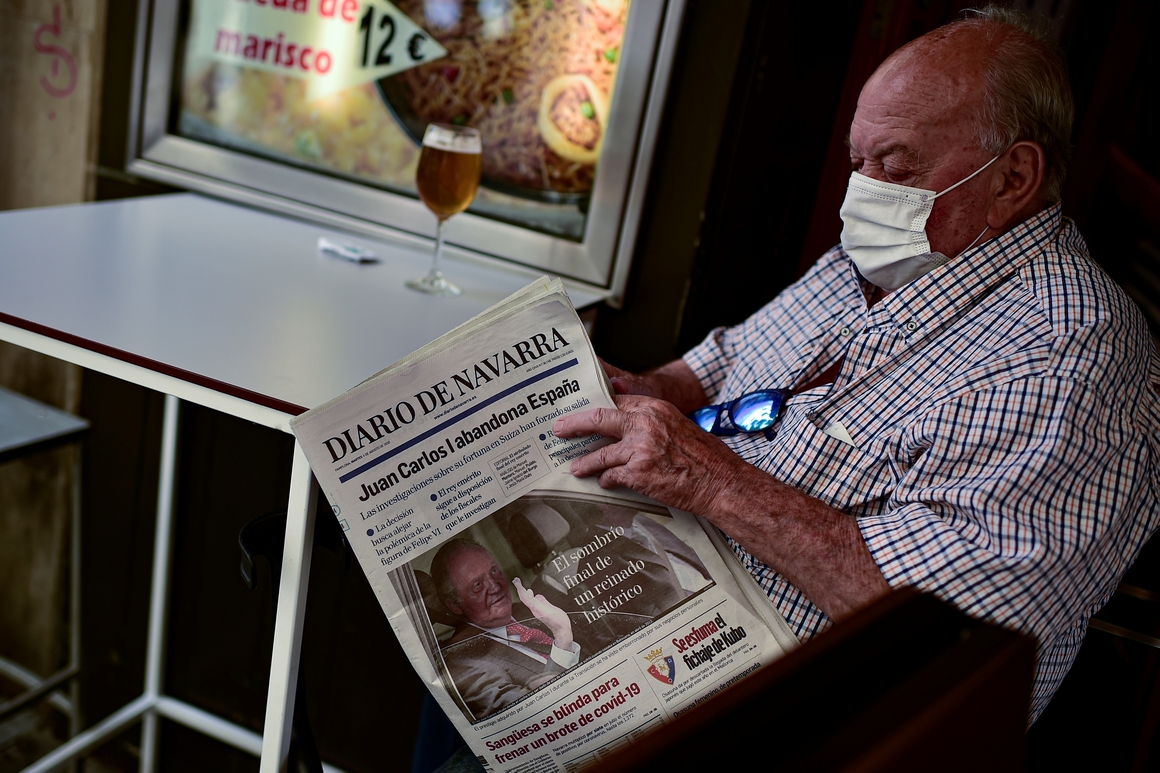 Spanish republicans are hoping that their moment has come — but the monarchy's constitutional shield will be hard to crack.

Former Spanish King Juan Carlos I shocked the world on Monday by announcing that he was leaving the country that he ruled for nearly 34 years due to the “public repercussions of certain past developments" of his private life.

The former monarch's exit came after months of revelations implicating him in alleged tax evasion and money laundering, and in-depth reports revealing decades of philandering and lavish spending habits.

But while disgust over the former king's alleged misdeeds has filled the sails of republicanism, proponents of ditching the monarchy will need more than a continued fair political wind. The institution enjoys formidable constitutional protections — baked in by the country's elite in the years after Juan Carlos was put in place by former dictator Francisco Franco — that are effectively impregnable. And it has powerful friends in the Spanish business and media world.

The royal household hopes that the ex-king's self-imposed exile will allow his son Felipe VI — to whom Juan Carlos abdicated the throne in 2014 — to distance himself from the scandals and weather the storm (although friends of the former king who spoke to El Mundo hope he will be back in the country next month).

The current king might find it hard to separate himself from his father's deeds as details emerge suggesting that the successor benefited from questionable cash, and as Swiss and Spanish prosecutors look into the alleged financial misdeeds committed by the former monarch.

Socialist Prime Minister Pedro Sánchez sought to shield the current king from criticism on Tuesday by insisting that "institutions are not judged, people are." He added that his coalition government's commitment to the monarchy remained firm and appealed in favor of "stability and robust institutions" amid the COVID-19 crisis and economic downturn.

But members of his own coalition government undermined that stance by questioning the state's decision to let Juan Carlos leave Spanish soil — as well as the continuity of the crown itself.

Shortly after the announcement, Deputy Prime Minister Pablo Iglesias — leader of the leftist Podemos party — said that by "fleeing abroad" the ex-king had behaved in a manner "unbefitting" of a head of state, and ultimately left the monarchy "in a very compromised position."

During a radio interview on Cadena SER on Tuesday, Equality Minister Irene Montero blasted the royal household for greenlighting the exit and linked the former monarch to his successor by declaring that it was "impossible to separate the decisions taken by the emeritus king from both his position as king or from his family."

Hours later, Iglesias and Montero's parliamentary group went further by issuing a statement openly calling for a "plurinational republic where social, civil and political rights are guaranteed for all people and where, in truth, justice is the same for all."

The call was widely echoed on social media, reflecting the results of a survey carried out last April, which indicated that a majority of Spaniards — 62.3 percent — think that a referendum on the monarchy should take place. Participants were evenly split on the central question though, with 47.5 percent backing the crown and 47 percent against.

Spain's 1978 constitution makes an assault on the monarchy virtually impossible.

"The monarchy is effectively armor-clad," said Alberto Lardíes, author of "The Borbon Democracy."

"There's virtually no way to get rid of it." Lardíes explained that the system's resilience is by design, constructed to protect the royal family — and those who directly benefit from their rule.

"After naming then-Prince Juan Carlos as his successor in 1969, Franco boasted that the continuity of his regime was 'atado, y bien atado' [locked in]," said Lardíes. He added that after the dictator died in 1975 the new king allowed the country to move toward a democratic path, "but without really dismantling the establishment." Many of the same families who had held political and economic power under the dictatorship retained their status in the new system.

"The political elites that kept their position after he came to power repaid Juan Carlos by creating an elaborate framework to allow him and his heirs to remain in power in perpetuity," Lardíes said.

In 1995 former Prime Minister Adolfo Suárez admitted as much in an interview with journalist Victoria Prego. Yet when the cameras weren't rolling, the politician — who oversaw Spain's 1978 constitutional referendum — said that his government had opted to enshrine the king's position as head of state after it became clear that if a standalone consultation on the monarchy was held, the republican option would have won out. Prego didn't report on Suárez's comments, which weren't revealed until 2016.

Lardíes said that once Juan Carlos consolidated his power, he reinforced his base of support by using his position to "mediate" on behalf of Spanish companies abroad, especially in the Middle East, where the monarch has a close relationship with his regional counterparts.

READ:  ‘She Kind of Reminds You of Margaret Thatcher’: Liz Cheney Prepares To Make Her Move

"For years that intervention has been excused as the king acting on behalf of the Spanish economy, but it's clear that some companies — run by his personal friends — have benefited more than others, and there's evidence that he received illicit kickbacks for that work."

According to Lardíes, the economic elites that have grown richer during Juan Carlos' rule are the ones that have shielded him over the past decades, and kept the national media from reporting on questionable behavior that has subsequently been exposed by the foreign press. He added that those seeking to distance the current king from his predecessor are attempting to make the king's exit seem like just another royal scandal.

That narrative will be hard to sustain as prosecutors close in on the ex-king. If a trial is held, further damaging details might come out. But it's also possible that Spanish prosecutors will fail to gather enough evidence to move forward — something that might undermine the very idea of an independent judiciary in Spain.

"Their mission, their arguments are a bit absurd: How on earth do you disconnect a 45-year-old monarchy from a man who was king for 39 of those years?" Lardíes asked rhetorically. "The crown's defenders will say they're doing it to maintain national stability, but it's clear that what they want to protect is their own ... They have no interest in seeing the system go, but this is too big to sweep under the rug."

"Independently from whether he did the things or not, the fact that he's picked up and left ... This is a new low," he added. "I'm not sure how they expect the public to ignore that."