The Facebook, Google and Twitter chiefs are facing questions over online extremism and Covid-19 misinformation as lawmakers consider how to tighten rules on the tech industry. 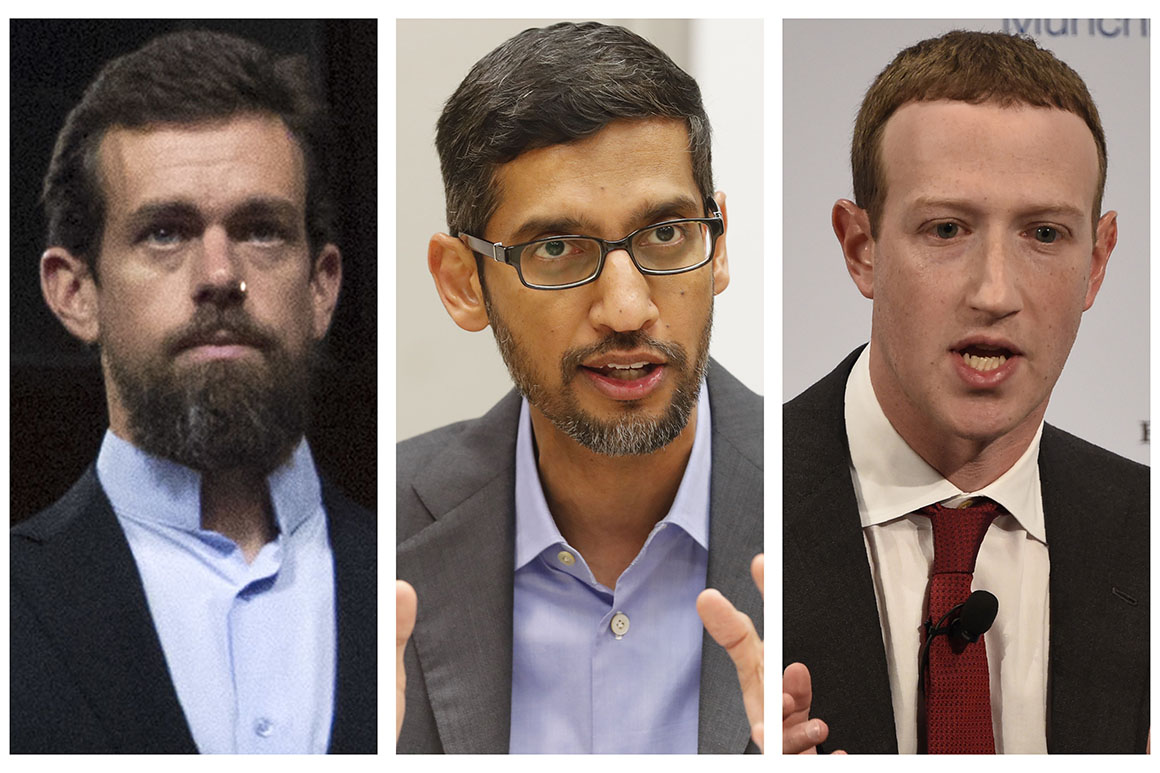 A House hearing with the CEOs of Facebook, Google and Twitter on Thursday is drilling into criticisms that the social media companies have been slow to respond to a tide of Covid-19 misinformation and a rise in online extremists, including those who carried out the Jan. 6 attack on the Capitol.

This is far from the tech moguls’ first go-around taking heat from lawmakers: The House Energy and Commerce Committee session marks the fourth time Facebook’s Mark Zuckerberg has testified before Congress in the past year, and the third for Google’s Sundar Pichai and Twitter’s Jack Dorsey.

But it is the first time they have appeared before Congress since Democrats took full control of Washington in the November elections, and since January's insurrection at the Capitol. Democrats have fumed that the companies helped to foment the violence in January by failing to curtail extremist content and political disinformation on their services.

And it’s the first time CEOs have appeared since their companies permanently or indefinitely suspended former President Donald Trump from their social media sites, actions that have drawn fury from Trump and his Republican allies in Congress.

Here are the top highlights from Thursday afternoon’s hearing:

Democrats vow to legislate against online disinformation and extremism

The committee's Democratic leaders had a clear message for the tech companies ahead of the hearing: The time for talking is over.

Chair Frank Pallone (D-N.J.) said in an interview on Wednesday that the panel is determined to use the session as a launching pad for legislation to rein in the companies.

“We've heard a lot, but now this is the beginning of our effort to figure out what to write, what legislation to write,” Pallone said.

Pallone said the focus of those legislative efforts will be figuring out how to discourage online platforms from amplifying disinformation while reaping the monetary benefits. “The idea is to disincentivize this extremist behavior so that they act in the public interest rather than rather than making a buck,” he said.

Pallone declined to provide a timetable for advancing legislation. A big challenge will be finding common ground among the lawmakers' multiple concerns about the tech industry's behavior, including Democrats' worries about the spread of hate speech and harmful falsehoods versus Republicans' accusations of censorship and anti-conservative bias.

Zuckerberg offered his most detailed proposal to date for tweaking the tech industry’s liability protections, while the Twitter and Google CEOs have urged lawmakers to show restraint. The decades-old law known as Section 230, which shields websites from liability over user content, has come under fire from lawmakers amid scrutiny of how tech companies moderate material on their platforms.

In his written testimony for the panel, Zuckerberg urged Congress to consider making those legal protections contingent on platforms demonstrating that they “have systems in place for identifying unlawful content and removing it.”

“We believe Congress should consider making platforms’ intermediary liability protection for certain types of unlawful content conditional on companies’ ability to meet best practices to combat the spread of this content,” he said.

Pichai focused his testimony in urging lawmakers to be wary of making sweeping changes to the law, which he said could have vast negative consequences for digital services big and small.

“We are … concerned that many recent proposals to change Section 230 — including calls to repeal it altogether — would not serve that objective well,” he wrote. “In fact, they would have unintended consequences — harming both free expression and the ability of platforms to take responsible action to protect users in the face of constantly evolving challenges.”