NEW YORK — A visibly shaken Mayor Bill de Blasio pleaded with community and religious leaders to help curb the destruction that has begun to spiral out of control in recent days as his long-time adversary Gov. Andrew Cuomo chastised the NYPD’s respon… 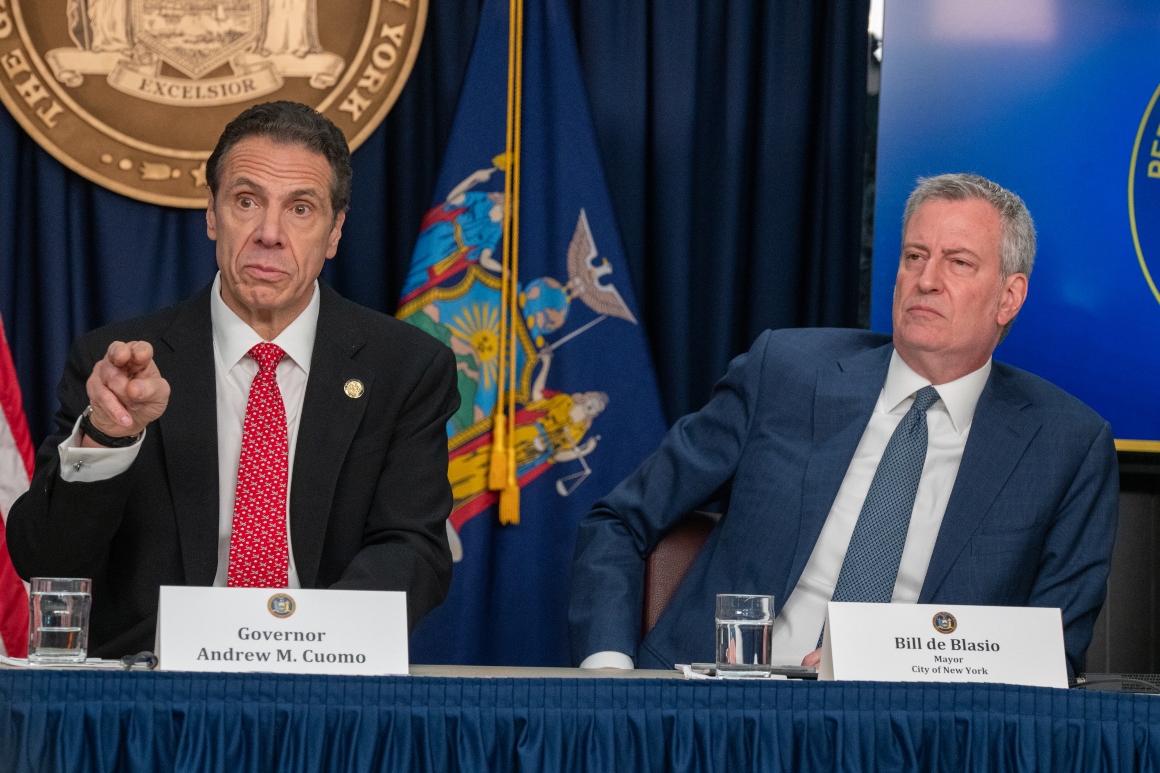 NEW YORK — A visibly shaken Mayor Bill de Blasio pleaded with community and religious leaders to help curb the destruction that has begun to spiral out of control in recent days as his long-time adversary Gov. Andrew Cuomo chastised the NYPD's response and openly speculated about removing the mayor from office.

On the fifth night of demonstrations in New York City, images of looters and police being attacked splashed across social media into the early hours Tuesday morning, even as the city imposed its first curfew in decades and large groups of protesters peacefully demonstrated. The more chaotic elements of the evening drew recriminations hours later from the White House to Albany with President Donald Trump tweeting “CALL UP THE NATIONAL GUARD” and Cuomo calling for more police presence amid what he saw as a failed response.

“I am disappointed and outraged in what happened in New York City last night,” Cuomo said during a press briefing Tuesday. “The police in New York City were not effective at doing their job last night. Period. They have to do a better job.”

Cuomo has put state police and 13,000 members of the National Guard on standby and even mused about invoking his statutory power to remove the mayor, but said the police had the capacity to handle the situation on their own.

De Blasio — at a tense press conference during which he snapped at reporters and called on local leaders to take a more active role in the protests — forcefully denounced the idea of allowing organized troops onto city streets, arguing their presence would only ratchet up tensions and heighten the chaos he is trying to tamp down.

READ:  Trump is his own Covid messenger. Allies say that’s the problem.

“Someone needs a history lesson: When outside armed forces go into communities, no good comes of it,” he said.

The mayor has shifted his tone multiple times since the start of the protests, which have been accompanied by violence from the NYPD, attacks on officers and increasingly destructive break-ins Sunday and Monday night along commercial strips. The mayor at first defended the police department and then chastised officers for an excess of force. He originally said the violence stemmed from “out of town” agitators, then conceded there were homegrown “anarchists” at work. He then on Tuesday blamed gangs and “career criminals” for exploiting protests that have flooded streets and parks in the wake of George Floyd’s death at the hands of Minneapolis police.

On Tuesday, de Blasio seemed desperate for community leaders to take control of protests and channel more peaceful forces while exiling anyone looking to incite violence.

It was unclear whether the administration had laid any of the groundwork to coordinate gatherings before de Blasio’s plea. The mayor’s office has a community affairs unit dedicated to forging and maintaining relationships with residents and organizations across the five boroughs.

Gwenn Carr, whose son Eric Garner was killed by a police chokehold in 2014, demanded Tuesday that protesters remain peaceful and chided those seeking to exploit the situation.

"This is our movie, and we're not going to be an extra in our movie,” she said during a press conference. “I am mad and angry about what happened to George Floyd, I am not mad about the protests. I am mad about the looters.”

De Blasio also slammed news outlets and politicians for focusing on looting over peaceful protesters who advocated against destruction. He snapped at the suggestion that police were looking the other way as looters targeted the Macy’s flagship store in Midtown, as well as other commercial strips. He said the NYPD is fully capable of preventing the break-ins and thefts that swept through the city and that a curfew beginning at 8 p.m. Tuesday will be extended through Sunday, the day before the city is set to begin the first phase of reopening.

With the coronavirus pandemic still raging, de Blasio encouraged protesters to stay home, assured them that their message had been heard and said that reforms are already in motion. The police department would be hastening the disciplinary process and shifting it to identify officers who should not be in a particular location or on the force altogether, though the mayor did not go into detail about what exactly those changes would entail.

When asked about reforms being weighed by the City Council to curb police aggression, specifically making it illegal for cops to use the deadly chokehold that killed Garner in 2014, de Blaiso said that he would work with lawmakers and would support legislation so long as it provided officers the ability to use the maneuver in life-threatening situations. The Council is planning to bring the measure, which would also ban other types of neck restraints, for a vote later this month, and earlier in the day Council Speaker Corey Johnson said that he had secured enough votes to override a veto — something the mayor threatened the last time the notion was proposed six years ago.

Cuomo said the mayor seemed out of touch with the gravity of the crisis.

But in order to deploy additional troops, Cuomo said he’d have to dramatically reduce the power of the mayor’s office.

“Technically the governor could remove a mayor — you’d have to file charges,” Cuomo said, but added he’s not ready to take that step. “I believe in the inherent capacity of the NYPD if managed and if deployed. That’s what I think hasn’t worked. … That has to be fixed and that has to be fixed today.”

“Time for @NYGovCuomo to realize the NYPD is doing its job. Governor is failing in his,” King said in a tweet. “NYPD is on battlefield risking their lives to protect us. Cuomo sits back in sheltered world second guessing NYPD heroes. Shameful!”