The chamber is also set to address two Trump-era regulations when it returns from its imminent recess. 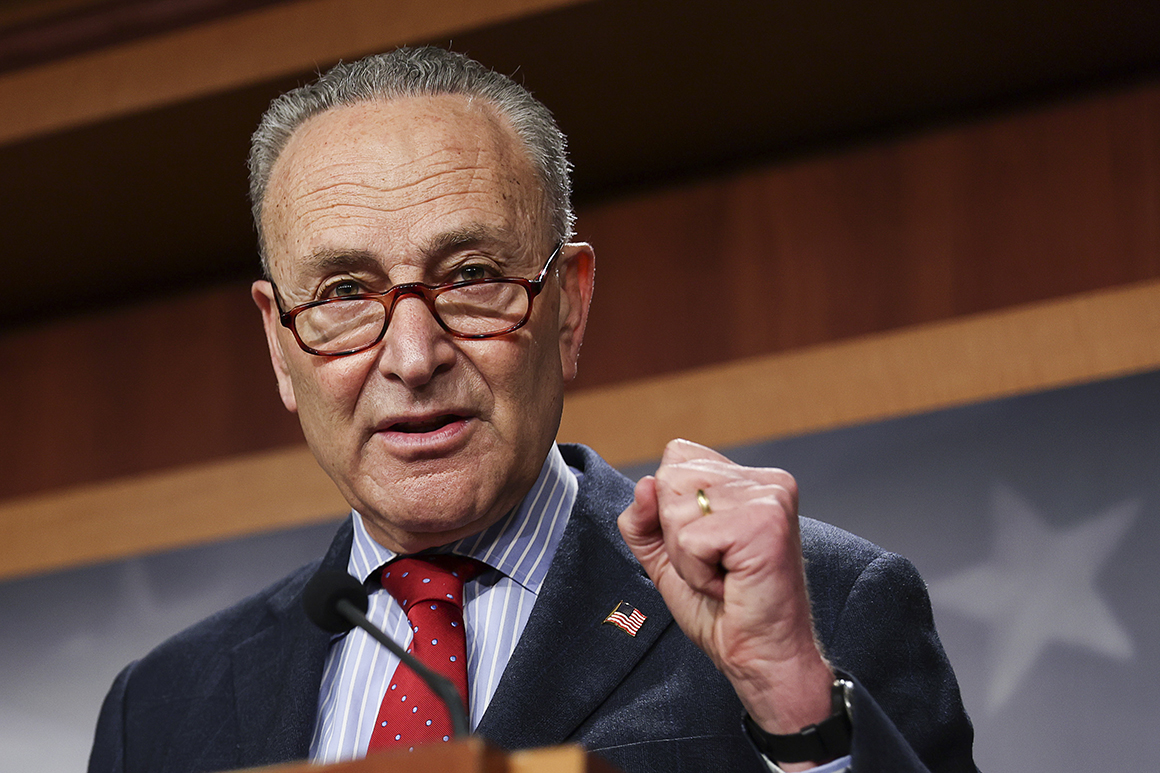 The Senate will take up legislation as soon as next month on hate crimes against Asian Americans, as well as background checks for gun buyers and a massive voting rights package, Majority Leader Chuck Schumer said Thursday.

The New York Democrat used a letter to colleagues and a floor speech to outline three broad areas the Senate will focus on when it returns from its forthcoming two-week recess: voting rights, economic growth and climate change, and guns.

“When the Senate returns, our agenda will be no less ambitious than it was over the past few months,” Schumer said Thursday. “This Senate will once again be the forum where civil rights are debated and historic action is taken to secure them for all Americans.”

The hate crimes legislation Schumer is teeing up, authored by Sen. Mazie Hirono (D-Hawaii), would appoint an official at the Justice Department to expedite review of such discriminatory crimes. The push comes after an Atlanta shooting that killed eight people, including six women of Asian descent, and a significant rise in bias crime against Asian Americans during the coronavirus pandemic.

In addition, Schumer reiterated his vow to put a bill requiring universal background checks for gun purchases on the floor, as well as an expansive voting rights bill that Democrats have given the significant marker of S.1. Neither are expected to receive GOP support, which means both would fall to a filibuster under the Senate's current rules.

“Failure is not an option,” he wrote in his letter to his caucus.


The Senate will also vote as soon as next month on two resolutions that would use the Congressional Review Act to overturn Trump-era regulations, marking the first time Democrats have used that procedural tool this Congress. The first resolution, introduced by Sen. Martin Heinrich (D-N.M.), would effectively reinstate the Obama administration’s regulations on methane emissions for the oil and gas industry.

A second CRA resolution would repeal a Trump-era regulation from the Equal Employment Opportunity Commission. The changes required the EEOC to provide more information to companies during the "conciliation" or settlement process, particularly regarding its findings of violations of federal anti-discrimination law.

Schumer’s announcement is the most detailed outline he’s provided about the next steps for the Democratic Senate's agenda after several weeks spent confirming President Joe Biden’s Cabinet nominees and passing a $1.9 trillion coronavirus relief plan.

“The next phase of our work will be to deliver on the promises we made to the American people to build a cleaner planet, and more equal economy, and a more just society,” Schumer told his colleagues Thursday.

Rebecca Rainey contributed to this report.