He was the sole GOP senator to vote to oust the president. Now he must decide whether to stand with his party on an explosive fight for the high court. 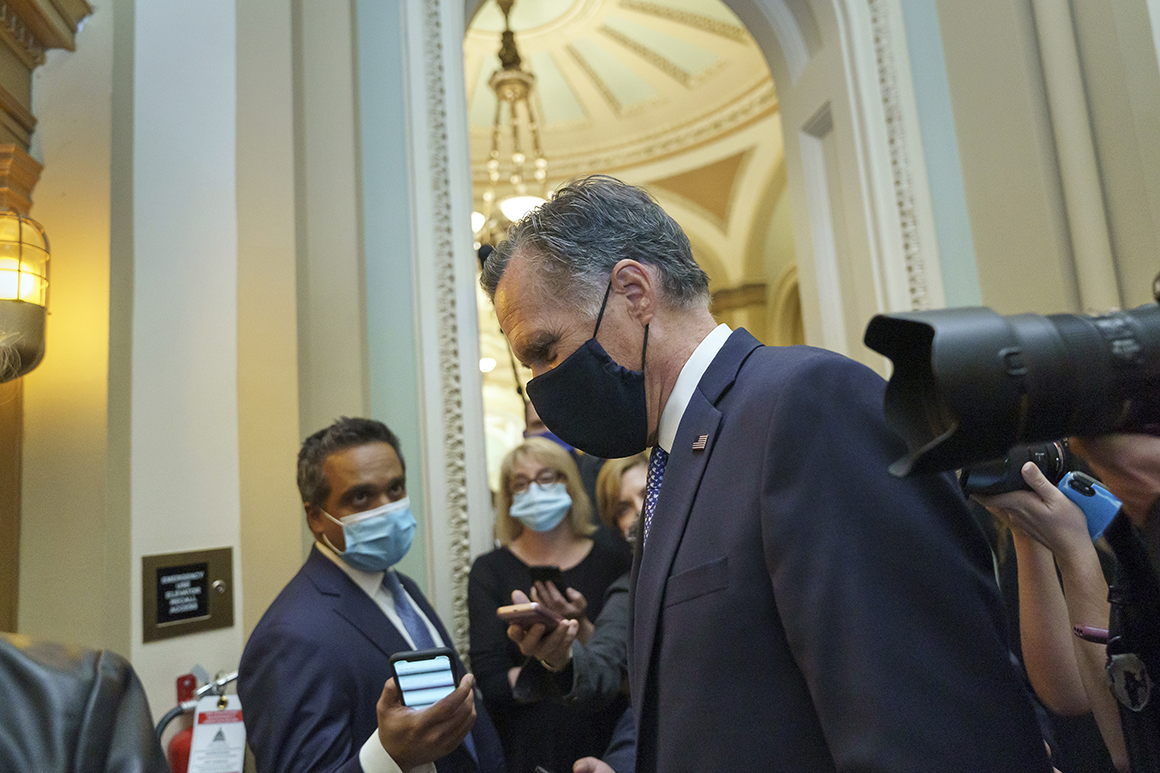 Don’t assume Mitt Romney will stick it to Donald Trump and try to block the president’s new Supreme Court nominee.

After the death of Justice Ruth Bader Ginsburg, the Utah Republican finds himself at another legacy-defining crossroads. He must decide whether to support an effort to install Trump’s third Supreme Court justice and shift the balance of the court to the right for decades to come, or oppose the move on principle and hinder the plans of Trump and Majority Leader Mitch McConnell.

With two of his Senate Republican colleagues lining up against a pre-election appointment, a Romney defection would evenly split the 53-47 GOP Senate and one more, however unlikely, would defeat the GOP push. With the pressure looming, Romney is showing little of his hand.

Since Ginsburg’s death on Friday, he’s declined to address the looming vacancy even as the vast majority of his conference gets on board with a speedy confirmation. He told reporters Monday that he would not comment before Tuesday's weekly party meeting and a chance to discuss the issue with his colleagues.

His reticence is not altogether a surprise: Romney is on the party’s whip team and prefers to speak to his colleagues before making a significant decision or announcement. And many Republicans think he will get on board.

“This is a lot different than impeachment,” said Sen. Rand Paul (R-Ky.). “Romney is from a state that is very religious and strongly pro-life. I think he was elected to support a nominee like that. … I would be very surprised if Romney doesn’t vote for the nominee.”

Romney has already made lonely political stands in the Trump era. He won’t support Trump for president and was the sole Republican vote to oust him from office during this winter’s impeachment trial. But that doesn’t make Romney an automatic vote against Trump’s appointee. And his staff has pushed back against the suggestion he’s leading the charge to block the pick.

People on both sides of the debate are giving Romney a wide berth. Sen. Susan Collins (R-Maine), who opposes filling the seat before the election, said she’s speaking to fellow senators about how to handle the vacancy — but has not spoken to Romney. Sen. Rick Scott (R-Fla.), who once criticized Romney in the run-up to impeachment, declined to weigh in on the Utah Republican’s role in the next Supreme Court nomination.

“He’s a principled person. And he’s going to make his decision on what he thinks is right,” said Sen. Marco Rubio (R-Fla.).

“I admire Sen. Romney’s character and his independent streak, his willingness to weigh things carefully and his careful consideration of matters of precedent and consequence,” added Sen. Chris Coons (D-Del.). “This is a moment of great consequence.”


Romney’s short Senate career has been punctuated by big moments of distancing himself from the president: marching in a Black Lives Matter protest and penning an op-ed before he even took his Senate seat vowing to push back against Trump when needed. He also occasionally criticizes Trump’s rhetoric, but he’s careful not to get dragged into a back and forth with the president on Twitter or elsewhere.

Yet the party’s 2012 presidential nominee has also largely backed Trump’s appointments and much of his agenda. His voting record is a regular reminder that he’s still a conservative, which his GOP colleagues hope is a sign that he will divorce his differences with Trump from the monumental opportunity the conservative movement sees before it.

“I really don’t know what he’ll do,” said Sen. Mike Braun (R-Ind.). “I think he’s probably wrestling with it just like he has on other issues.”

Romney’s opinion may not be decisive: He’d need one other Republican senator to join him and Sens. Lisa Murkowski (R-Alaska) and Collins in opposition to derail McConnell’s hopes of a swift confirmation. For now, that would take a surprise defection after vulnerable Sen. Cory Gardner (R-Colo.) backed McConnell's strategy.

But should Romney be the only other Republican to join the Senate GOP’s moderate bloc, it would invite the explosive scenario of Vice President Mike Pence breaking a 50-50 vote on the Senate floor for a Supreme Court nominee, perhaps just days before Election Day.

Romney’s decision may do a lot to illustrate what kind of senator he will be as he finishes his first two years in the chamber. Romney has little of the baggage of his colleagues over past Supreme Court fights or battles over precedent. At a 2018 debate, Romney said Senate Republicans’ blockade of President Barack Obama’s Supreme Court nominee, Merrick Garland, set no new standard and did not say how he would handle an election-year confirmation under Trump.

Conservative advocacy groups are keeping a close eye on Romney. The Judicial Crisis Network announced Monday that it was pouring $2.2 million into ads boosting the effort to fill the seat. The targeted states are home to vulnerable GOP incumbents, except one: Romney’s Utah.

But Romney is insulated from immediate political ramifications. His term isn’t up until 2024, and that gives Romney significant freedom to make his own way.

With the filibuster gutted on all nominations after recent rules changes by both parties, Senate Democrats are powerless to stop Trump’s appointment on their own. But many enjoy good relationships with Romney and are counting on him to take yet another stand against Trump.