RNC chair Ronna McDaniel is positioning herself as a neutral force in the party going forward, as President Donald Trump’s term winds down. 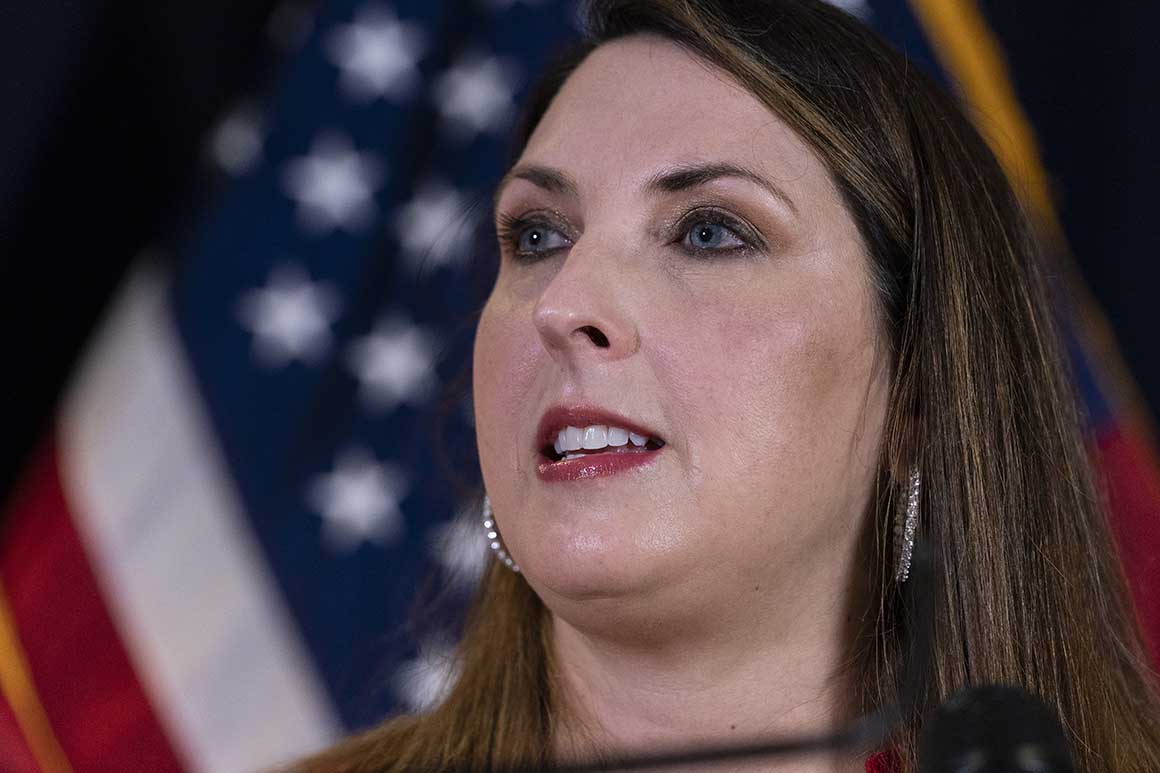 McDaniel is inviting roughly a dozen potential 2024 presidential candidates to the RNC's January meeting in Amelia Island, Fla. — the most explicit move she's made yet to show that the committee will be impartial going forward and not simply an extension of Trump’s political machine, even as he openly mulls a comeback bid.

With Trump leaving office, the party organization is confronting a predicament: How to gingerly detach itself from the soon-to-be-ex-president — who has wielded vast control over the GOP apparatus for four years — as he plots his own political future. While McDaniel has been touting Trump’s endorsement as she runs for reelection as RNC chair, she has taken pains to privately reassure top Republicans that she would be an unbiased arbiter in the next nomination fight.

“I certainly think for the RNC to proactively invite potential 2024 candidates to [the winter meeting] signals that the party is going to be neutral — and the party has to be neutral. Ronna understands that fully,” said Henry Barbour, an influential RNC member from Mississippi.

McDaniel sent an email to the committee’s 168 members Wednesday in which she highlighted Trump’s endorsement but also vowed to “work to ensure that all Republican candidates can be successful.” Typically, the president picks the chair of the party that holds the White House, as Trump did with McDaniel in 2017, and the out-party has a race for the post.

The president’s looming candidacy has cast a shadow over the GOP as it grapples with how — or whether — to move on from the Trump era. Trump advisers say it’s possible he could announce his comeback bid in the immediate weeks ahead, hampering other would-be 2024 hopefuls from introducing themselves to donors, building national organizations, and visiting early-voting states.

Trump on Tuesday evening made his most explicit comments yet expressing interest in a 2024 campaign, telling RNC members at a White House Christmas party, “It’s been an amazing four years. We are trying to do another four years. Otherwise, I’ll see you in four years.”

Senior Republicans have been privately gossiping for weeks about prospective challengers to McDaniel, but none have pulled the trigger on a bid.

The roster includes former White House chief of Staff Mick Mulvaney, who wrote in a text message Wednesday that he’d been approached about the RNC post but that he hasn’t “pursued it." Mulvaney, who later became the U.S. Special Envoy to Northern Ireland, said he was instead focusing on his newly launched hedge fund and “a couple other projects.”

Colorado Sen. Cory Gardner, who lost reelection last month, has also been mentioned for the chairmanship but isn't expected to run.

Barbour, another rumored candidate and the nephew of ex-RNC Chair Haley Barbour, said in an interview that he’d ruled out a bid and had endorsed McDaniel.

Still, McDaniel has faced questions in her private calls with members about whether she would be an impartial umpire. Given the chair's close relationship with Trump, some in the party have expressed concern that under her leadership the committee would be a subsidiary of the president and that Trump would use it to advance his ambitions.

But McDaniel’s allies have strenuously pushed back on those suggestions. They note that the RNC stayed out of a handful of GOP nomination fights Trump meddled in himself, including the 2018 Georgia and Kansas gubernatorial primaries. The RNC was also on the sidelines during the 2017 Alabama Senate primary, when Trump endorsed then-Sen. Luther Strange over former state Supreme Court chief justice Roy Moore. Moore would end up winning the primary before ultimately losing the special election to Democrat Doug Jones.

“I have full confidence that Chairwoman McDaniel would be neutral in the GOP primaries. She understands all nominations are in the hands of the Republican voters,” said Alabama Republican Party Chair Terry Lathan.

READ:  Trump’s blog failed, bigly. His next online venture won’t be any easier.

McDaniel has privately told members she doesn’t plan to seek reelection in 2023, meaning the winner of the co-chairmanship could have a leg up on taking over the top job for the next presidential election.

It remains unclear which potential presidential candidates will attend the January RNC meeting; most of them did not respond to requests for comment on their plans.

The event could become one of the first cattle calls of the 2024 cycle. RNC meetings often attract a wave of White House aspirants and their top advisers, who use the gatherings to forge relationships with influential party officials.

“In some form or fashion there will be a 2024 nominating process. Whether the president runs or whether he’ll have a credible challenger remains to be seen. It would be smart for candidates to plow the fields and see what happens,” said Matt Moore, a former South Carolina GOP chair. “Reaching out to RNC members shows a seriousness given that RNC members are the most connected people in their states.”

While Trump’s declarations of interest in a comeback bid have prevented would-be GOP candidates from taking more overt steps to lay presidential groundwork, many of them have aggressively engaged in the Georgia Senate runoffs, potentially helping them earn chits that could pay dividends down the line. Scott, Rubio, Cotton, and Pence have all visited the state recently.