Tech billionaire Peter Thiel’s twin $10 million investments in two Senate candidates made him one of the key early figures in the 2022 election. 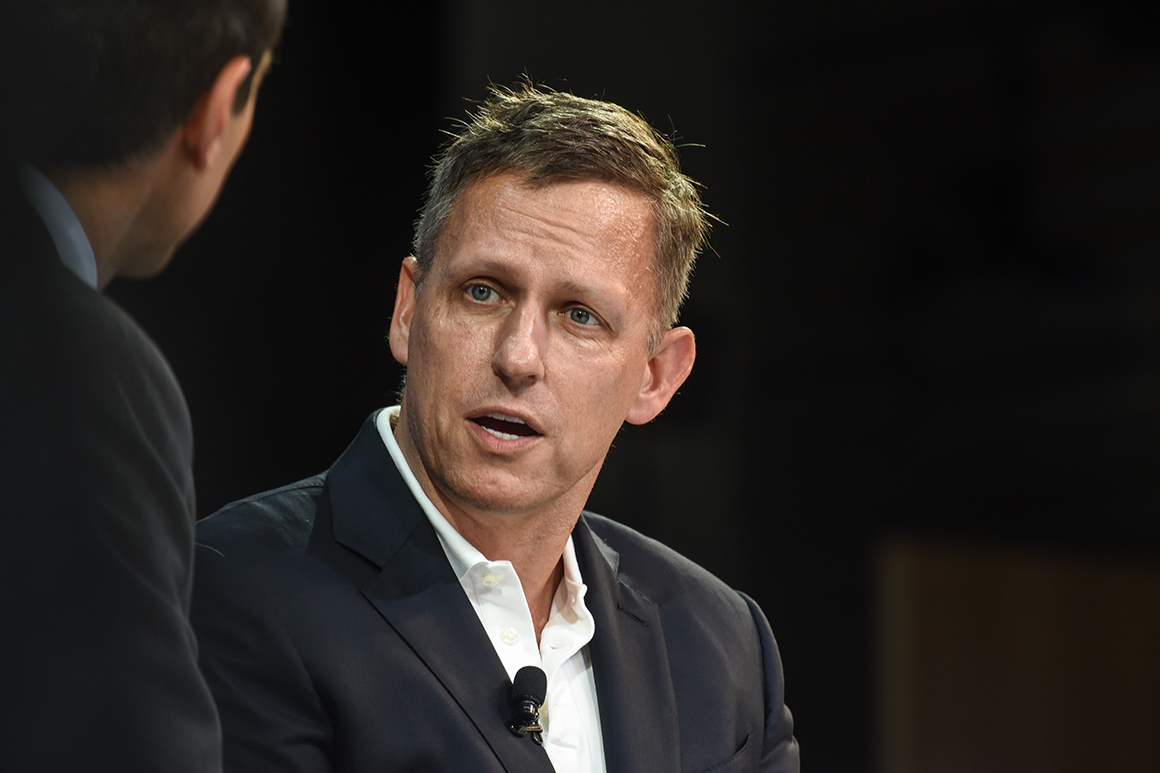 Ohio Republican J.D. Vance didn’t go it alone when he trekked to Donald Trump’s Mar-a-Lago resort for a meeting with the former president earlier this spring — the soon-to-be Senate candidate was accompanied by his mentor and political benefactor Peter Thiel.

Thiel, a tech billionaire and longtime Trump backer, had arranged the sit-down, which came five years after Vance declared that he had “no love” for Trump. Vance, who was looking to get some face time with Trump, took a good-natured ribbing from the former president during the hour-long meeting, but that's all: Trump has so far refrained from publicly weighing in against Vance, a luxury the ex-president has not afforded other past Republican critics.

Thiel’s private power-brokering illustrated his growing influence in Republican politics, but his clout has become even clearer in the weeks since. Thiel has given a pair of $10 million donations to separate super PACs that are backing Vance and Arizona Republican Blake Masters, another protégé poised to launch a Senate campaign. The contributions are the most ever to outside groups supporting single Senate candidates, according to the Center for Responsive Politics, a nonpartisan organization that tracks political giving.

The largesse has transformed Thiel, an early Facebook investor and PayPal co-founder, into an outsize figure in the fight for control of the 50-50 Senate, providing fuel to two longtime associates who embrace his populist-conservative views. Top Republicans have expressed astonishment at the size of the donations and say they’ve turned Vance and Masters — who’ve never before run for elected office and will have to overcome primary rivals with far longer political resumes — into formidable contenders in the blink of an eye.

“A lot of people didn’t know if they should take Blake [Masters] seriously as a candidate before the money came in, and when the money was announced Blake became a serious prospective candidate,” said Kirk Adams, a former Arizona state House speaker. “Before folks didn’t really have any metric to judge his prospective candidacy, but now they do. Ten million dollars is a pretty damn good metric.”

Thiel declined an interview request. His donations are by far his largest in two decades of giving to Republican candidates — a partial reflection, friends say, of his intensifying interest in politics.

The tech investor’s profile in donor circles grew during the 2016 election, when he contributed around $1.5 million to pro-Trump outfits and spoke at the Republican National Convention. The 53-year-old, German-born Thiel would become an influential figure in Trump’s orbit. He served on Trump’s transition team and saw several of his aides become senior figures in the administration. He maintains a close relationship with Trump's son-in-law and senior adviser Jared Kushner; the two both have homes in the Miami area. 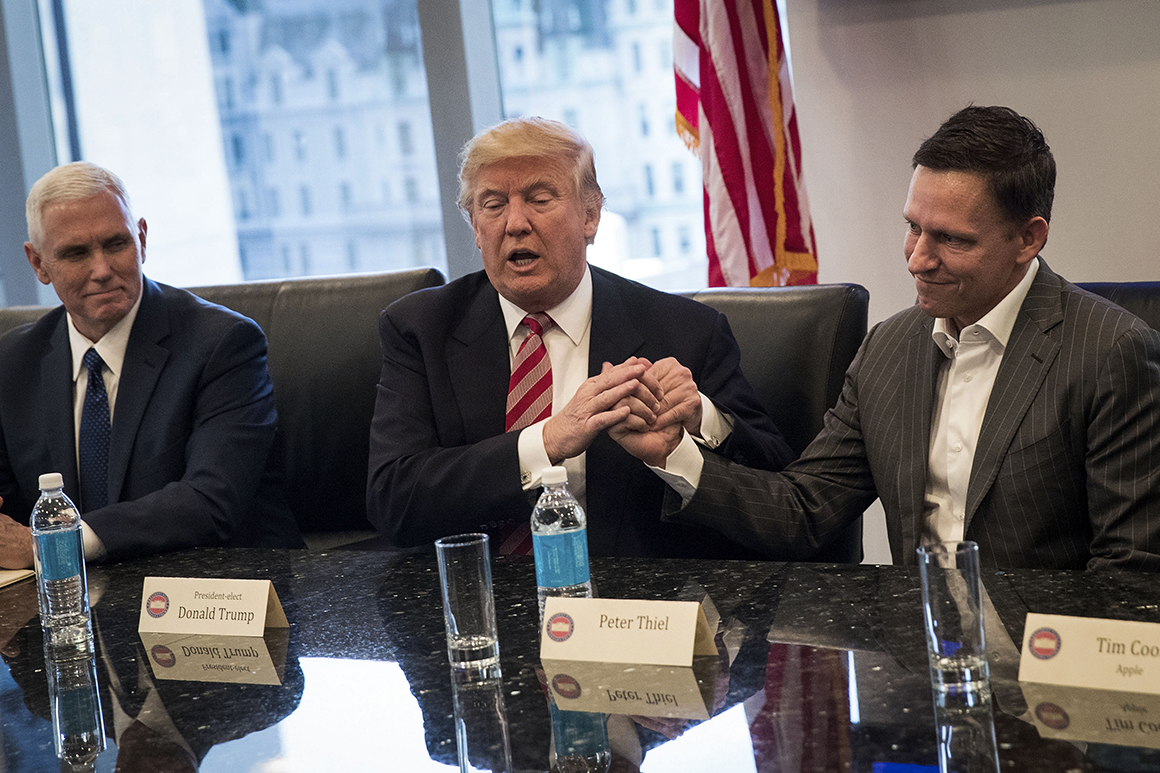 But Thiel’s latest contributions stem not only from his growing political involvement but from his closeness with Vance and Masters. Vance became acquainted with Thiel when he was at Yale Law School and then went to work for Thiel in Silicon Valley; Thiel later became an investor in Vance’s venture capital firm. Masters, meanwhile, was a student of Thiel’s at Stanford University and eventually became chief operating officer of Thiel Capital and president of the Thiel Foundation. He maintains a website in which he’s posted detailed notes from Thiel’s class at Stanford.

Vance and Masters appear to closely embrace Thiel’s ideological beliefs, including his distrust of globalization — one of the issues that drew Thiel to Trump.

Vance, who authored "Hillbilly Elegy," a bestselling memoir about growing up in working-class Ohio, laid out his views during a July 2019 speech lamenting the shifting of jobs overseas. Last year, he published an essay titled “End the Globalization Gravy Train.”

Masters, meanwhile, co-authored with Thiel the 2014 book “Zero to One,” in which they portrayed globalization as the enemy of innovation.

Thiel’s support for 2022 candidates is expected to go beyond Vance and Masters, those familiar with his plans say. The list includes Florida Gov. Ron DeSantis, a rising star in Republican politics up for reelection next year, with whom Thiel has met privately.

READ:  How Biden plans to fix the coronavirus testing problem

Thiel is also looking at donating to an assortment of House candidates, including Army veteran Joe Kent, who is waging a challenge to GOP Rep. Jaime Herrera Beutler, a Trump impeachment backer, in Washington state's all-party primary next year. Earlier this year, Thiel contributed to Brian Harrison, a former Trump administration official who ran unsuccessfully in a Texas congressional special election.

Over the years, he has supported an array of libertarian-leaning politicians, including Utah Sen. Mike Lee, Kentucky Sen. Rand Paul, and former Michigan Rep. Justin Amash.

But Thiel has never made political donations at this scale before — and not all of his political bets have paid off. In 2018, he backed the gubernatorial campaign of Kansas Republican Kris Kobach, an immigration hardliner who defeated the sitting Republican governor in the primary before losing the general election to Democrat Laura Kelly. Two years later, he spent more than $2 million in support of Kobach’s failed Senate campaign, which ended with a loss to an establishment-backed candidate in the Republican primary.

Thiel’s giving drew scrutiny in 2017, when he donated to then-Missouri Attorney General Josh Hawley’s Senate campaign. The contribution landed just days before Hawley launched an antitrust investigation into Google, a company Thiel has criticized as monopolistic.

Within Republican circles, Thiel is seen as an unconventional donor. Unlike other major givers, he lacks a singular political adviser or gatekeeper for candidates looking to court him. The billionaire has operated mostly independently of those in the tight-knit world of Republican operatives, though he counts the incendiary conservative commentator Ann Coulter, with whom Thiel co-hosted a 2019 fundraiser for Kobach, as a friend. 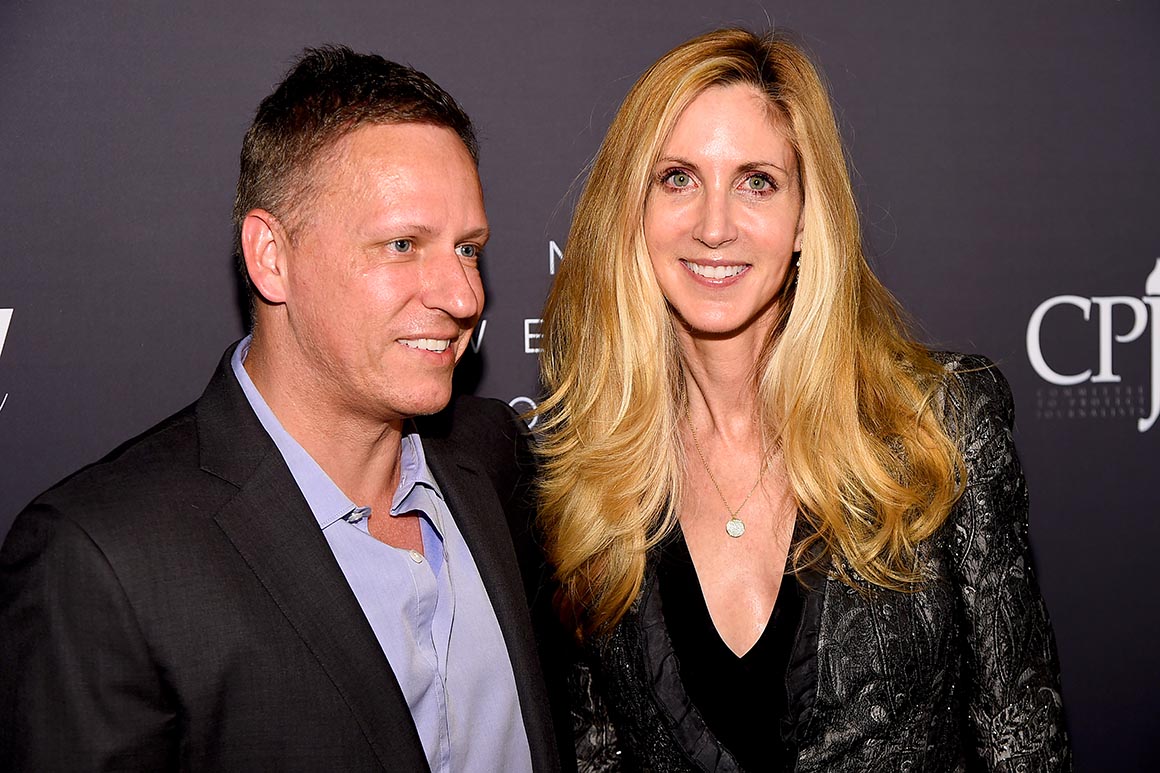 While some other Republican contributors, such as those in the Koch political network, have used their money to invest in building party infrastructure, Thiel has so far refrained from doing so. And unlike other donors who delve into the minutiae of how candidates they invest in build their campaign teams, Thiel has taken a largely hands-off approach with Vance and Masters, those familiar with the discussions say.

READ:  Democrats’ Covid conundrum: Work with GOP or run them over

Thiel, who according to Forbes is worth more than $4 billion, made his first splash in conservative politics in 2009, when he penned an essay in outlining libertarian views that sharply diverged from the liberal bent of Silicon Valley. His attraction to Trump, friends say, partly stemmed from their shared distaste of the media. After the gossip blog Gawker in 2007 wrote that Thiel was gay, Thiel retaliated by secretly financing wrestler Hulk Hogan’s lawsuit against the website over its posting of a Hogan sex tape. The suit, which resulted in millions of dollars in damages being awarded to Hogan, forced Gawker out of business.

Republicans in Ohio and Arizona say Thiel’s money by itself won’t be enough for either Vance or Masters to win the GOP nomination. Vance is squaring off against a handful of wealthy candidates with the ability to pour millions of dollars into their own campaigns, which would offset Thiel’s funding.

Masters will need to get by Jim Lamon, a deep-pocketed energy executive who could self-finance his campaign, and state Attorney General Mark Brnovich, a potential candidate who would benefit from widespread familiarity among voters.

There are also limitations as to how far Thiel’s money can go, given that super PACs must pay higher rates for TV advertising than a candidate’s official campaign. Both states include expensive media markets, making it necessary for Vance and Masters to build formidable war chests on their own, say Republican strategists in Arizona and Ohio.

It’s unclear whether Thiel’s $10 million donations are a one-time investment — or if more money is on the way.

“Unless you’re Stephen King with successful movies, bestselling authors are not household names,” Doug Preisse, the chair emeritus of the Franklin County, Ohio, Republican Party said of Vance. “It’s a super start, but he’ll need every bit of that — and more — in a race with a number of other well-connected self-funders.”