The notion that the president might not accept the election results has jumped from the partisan fever swamps to center stage in the campaign. 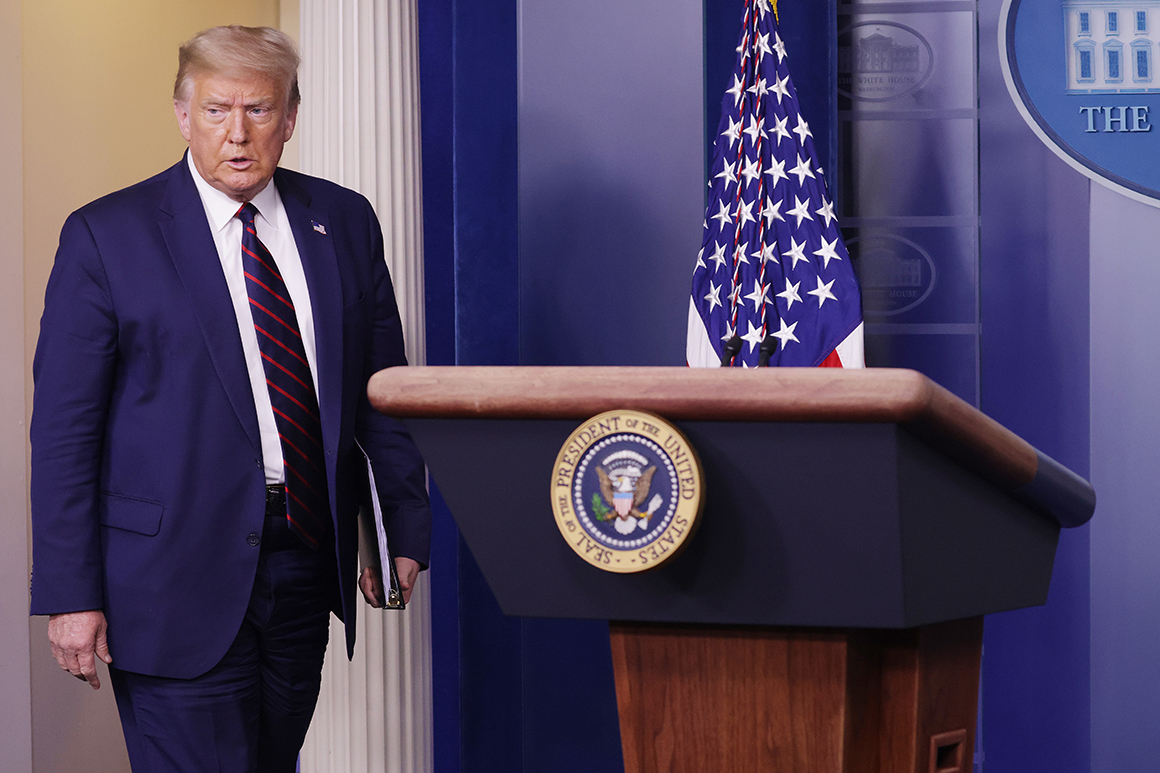 Donald Trump’s suggestion that he might try to delay the election — or might not accept the result — is rapidly coming to the forefront of the presidential campaign, foreshadowing a final stretch roiled not only by the coronavirus and the economy, but by clashes over the nation’s most fundamental democratic norms.

Though Trump has no authority to move the election — an idea he floated Thursday — Democrats are already bracing for Republican challenges to absentee ballots and at vote counting on Election Day. They have good cause to be prepared: the president has repeatedly raised the prospect of a “rigged election” and recently declined to say if he’ll accept the results.

Trump’s rhetoric points increasingly to the possibility that he will dispute the outcome in a year marked by primary election administration meltdowns — a prospect that is heightened by his absolute control of state and national party machinery and an attorney general who has amplified Trump’s unsubstantiated claims about mail-in voting fraud.

“I don’t have any doubt that’s where he’s headed,” Pete Giangreco, a Democratic strategist who has worked on nine presidential campaigns, said of Trump’s effort to discredit the election. “He wants to delay the election because if they had the election today, he’d lose. The further out he gets from today, the better off he is … So, he wants more time to jerry-rig the system to somehow spit him out as the winner.”

Even before he was elected president, Trump frequently made unsubstantiated assertions about widespread voter fraud. He called for a do-over after losing the Iowa caucuses to Ted Cruz in 2016, and he made claims about “serious voter fraud in Virginia, New Hampshire and California” after failing to carry those states in the general election that year.

But with Trump continuing to run far behind Biden in national and swing state polls — and with the election now less than 100 days away — the Republican president’s rhetoric has thrust the notion that Trump might not accept the election results from the partisan fever swamps to center stage in the campaign debate.

Earlier this month, in an interview with Fox News, Trump declined to say if he will accept the results of the election, saying, “I have to see.” And in floating the possibility of a delay on Thursday, Trump suggested that what he was seeing so far wasn’t promising.

“With Universal Mail-In Voting (not Absentee Voting, which is good), 2020 will be the most INACCURATE & FRAUDULENT Election in history,” Trump wrote on Twitter. “It will be a great embarrassment to the USA. Delay the Election until people can properly, securely and safely vote???”

Later in the day, Trump insisted he did not want to see the election delayed but refused to foreclose on the possibility.

Democrats cast Trump’s tweet as an effort to distract from the release that day of dismal second-quarter economic news, given his lack of power to move the election. A Democratic National Committee spokeswoman, Lily Adams, called it “nothing more than a desperate attempt to distract from today’s devastating economic numbers,” and Biden’s campaign responded to questions about the tweet only with a prepared statement on the economic numbers.

“President Trump is obviously scared and is reacting in a way that … is indicative of how he treats everything else — looking for the most extreme, unlawful way to reflexively address a matter, in this instance being woefully behind in the polls,” said Wayne Goodwin, chairman of the Democratic Party in North Carolina, where requests for mail-in ballots have exploded ahead of the November election. “But the election is going to happen, period.”

But Democrats remain wary of Trump’s efforts to limit access to mail-in voting, with legal battles continuing over mail voting that has expanded amid the coronavirus pandemic. Democrats are also fearful that in states in which the outcome is close, Trump may appeal to courts to intervene, casting a cloud over the result. Biden and the Democratic National Committee, in coordination with state parties and advocacy groups, have lawyers and political operatives working across the battleground map and have hired voter protection directors in 20 states.

“I don’t think it can be understated how serious it is,” said Les Francis, a Democratic strategist and former deputy White House chief of staff in the Carter administration. “I don’t want it to be just a campaign issue. It’s bigger than that. This is a constitutional issue. This is an issue about the future of the republic, and the sanctity of our civic institutions.”

One veteran of the Clinton administration who has ties to the Trump administration, said, “I think we’re dealing with a person who doesn’t know there are boundaries.”

And this is only the beginning. The issue of the legitimacy of the election promises to become even more prominent once voters begin receiving mail ballots — in some states as early as September. And it will likely factor in the presidential debates this fall.

Already, Biden has shown a willingness to engage, predicting on Comedy Central’s “The Daily Show with Trevor Noah” last month that Trump would “try to steal” the election by depressing turnout.

“This is the guy who said all mail-in ballots are fraudulent — voting by mail — while he sits behind a desk in the Oval Office and writes his mail-in ballot to vote in a primary,” Biden said.

What the Biden campaign’s posture Thursday implicitly acknowledged was that, for Trump, turning coverage of the election to anything other than the coronavirus and the economy is likely to be beneficial.

Because of the coronavirus and the slumping economy, “driving a narrative for him is really difficult right now,” said Amanda Renteria, who was national political director of Hillary Clinton’s 2016 campaign.

In floating the possibility of a delay, she said, Trump is seizing an opportunity to go on offense.

“It’s edgy, it’s crazy, it gets us all talking,” Renteria said. “Now, the question is whether or not it’s strong enough or compelling enough to keep him in the headlines talking about it, given coronavirus and everything else that’s happening … We’ll learn that in the next couple of days.”

READ:  Meet The Politician Who Lives on TikTok

But there are also political risks for Trump. On Thursday, Republicans roundly rejected the idea of moving the election, marking an unusually clear — and rare — break between the president and officials in his party. Against the backdrop of a presidency in which down-ballot Republicans have paid steep prices for crossing the president, top GOP elected officials nevertheless appeared to draw a line.


“He can suggest whatever he wants,” Sen. Marco Rubio (R-Fla.), the chairman of the Senate Intelligence Committee, told reporters. “The law is what it is. We’re going to have an election that’s legitimate, it’s going to be credible, it’s going to be the same as we’ve always done it.”

House Minority Leader Kevin McCarthy (R-Calif.) also said he opposes delaying the election. “No way should we ever not hold an election on the day that we have it,” McCarthy told reporters.

By late Thursday, Trump was framing his tweet more as a provocation than anything else, writing on Twitter, “Glad I was able to get the very dishonest LameStream Media to finally start talking about the RISKS to our Democracy from dangerous Universal Mail-In-Voting (not Absentee Voting, which I totally support!).”

He vowed to win the election “BIG!” and said election results must be known on the night of the election, “not days, months, or even years later!” a reference to the possibility that a deluge of mail-in ballots will prevent a close contest from being called on election night.

Asked for follow-up on Trump’s tweet, Hogan Gidley, the Trump campaign’s national press secretary, suggested that the president was making a point more than outlining a course of action.

“The President is just raising a question about the chaos Democrats have created with their insistence on all mail-in voting,” Gidley said in a prepared statement. “Universal mail-in voting invites chaos and severe delays in results, as proven by the New York Congressional primary where we still don’t know who won after more than a month.”