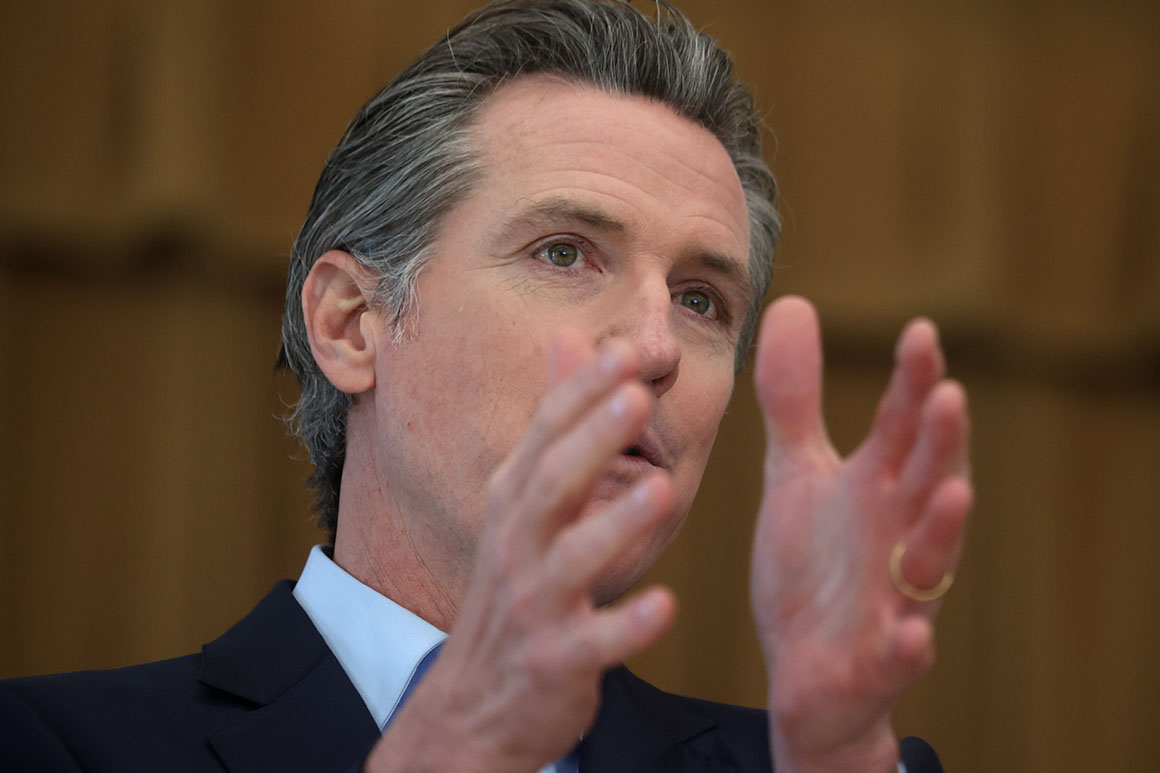 SACRAMENTO — California Gov. Gavin Newsom spent the past year as one of the nation's most restrictive pandemic governors. Now, he’s throwing the doors open.

Facing a recall threat, Newsom this month announced the return of outdoor concerts and Major League Baseball games, allowed Disneyland to open its gates soon and signed legislation that attempts to reopen schools.

The Democratic governor has two things going for him: a decline in the infection rate and an increase in vaccinations. But the shift in his Covid-19 strategy has prompted cynicism from Republicans and some local leaders as a recall election becomes reality. Would this be happening if not for the movement to oust him?

"Now the recall pressure is on him and suddenly he's changed his tune," said Jon Fleischman, a conservative pundit and former executive director of the California Republican Party. "He's changing the very framework he set up, and it's right about the time that it became obvious that this recall is going to qualify."

Newsom acknowledged this week that the recall election will likely happen as organizers said they had more than 2 million signatures ahead of Wednesday's submission deadline.

The same governor who was lauded for taking the virus seriously last spring and who imposed a curfew and stay-at-home orders during the holiday season is now moving quickly to reopen all parts of society. It's not anywhere near the degree of what Republican governors in Texas and Mississippi have done — Newsom's rules still require masks, social distancing and capacity limitations. But the message is clear: California is open again.

Newsom this month changed rules in such a way that dozens of counties are able to reopen businesses and schools sooner, thrilling restaurateurs and pandemic-weary residents but infuriating teachers unions and some local officials who said the acceleration was arbitrary.

READ:  Once on defense, Dems grow confident in Trump country

Even with the state's improving coronavirus conditions, Newsom can't escape that recall lens.

“So he is changing the blueprint rules without any logical reason,” said Santa Clara County Executive Jeff Smith, who is also a physician. “Our futures are in the hands of a governor trying to stop a recall. He has already killed tens of thousands by opening too soon in May. Now he wants to do it again.”

Smith oversees the largest county in the liberal San Francisco Bay Area, and he has regularly imposed stricter rules than Newsom. But the governor's changes have even drawn criticism from conservatives like Assemblymember James Gallagher (R-Nicolaus) who have long demanded that he loosen California restrictions. While they support more reopening, they believe the governor has been inconsistent and should have done more sooner.

"Could have been done months ago. Why now? 2 million reasons why,” Gallagher said in a tweet, referring to the number of signatures the recall campaign said it has collected.

The pandemic has often proven to be a lose-lose for Newsom. In January, he was blasted for unilaterally lifting stay-at-home orders, while others criticized him for shutting down in the first place. Democratic lawmakers for months said he overstepped his authority through executive orders, while frustrated parents say he's left too much up to local control on schools and other matters.

Newsom and state officials, however, say they are driven by science. And that science has changed as more data is gathered on the virus, they note.

When the governor locked down California in November, the state was entering its worst phase of the pandemic. Infection rates and deaths rose to record levels, while hospitals overflowed with patients, particularly in Southern California and the Central Valley.

Since then, the state has seen infection metrics plummet and now has one of the lowest case rates in the nation. California’s Secretary of Health and Human Services Mark Ghaly on Friday pointed to vaccine progress — more than 20 percent of the state has received at least one dose — and falling hospitalizations and infections as justification to loosen rules.

“We put out tiers many, many months ago that determine how we move, what sectors of our economy move and our advancement to get our kids back safely in schools,” Newsom said at a news conference this month when asked if political calculations were playing a role.

Still, public health officials beyond Santa Clara's Smith are concerned about states reopening too quickly, especially with widespread vaccine availability just several weeks away. Rochelle Walensky, director of the Centers for Disease Control and Prevention, urged states this month to hold the line on restrictions as cases plateau at a relatively high level.

Yolo County Health Officer Aimee Sisson said she has encouraged state officials to take a slower approach and stick to the existing blueprint. Sisson was previously the health officer in Placer County, a more conservative area where she faced constant pressure to loosen Covid-19 restrictions.

“It is clear to me that science is not the only basis for decision making in the governor’s office,” Sisson said in an email.

Thad Kousser, chair of the political science department at the University of California, San Diego, said Newsom’s strategy is politically motivated on some level but the criticisms are unfair. It’s just part of the job of a governor to balance interests.

“If you were to ask what would things look like if a governor was acting totally based on short-term political calculus, we would have moved to reopening much quicker. The governor would’ve been pushing schools to reopen much more to ward off a recall,” Kousser said. “This governor has to worry about educational divides, economic growth and infection prevention, and he’s got to balance those. That’s the job of a governor, regardless of a recall threat.”

READ:  No triumphant homecoming for Conte in Rome

Newsom has shifted in other ways over the past several weeks. After months of sticking to video press conferences from a state emergency office, the governor began traveling the state to tout vaccine distribution sites, flanked by Democratic supporters. He has opened attendance to reporters for the first time after his office previously said such events were unsafe. He also delivered a splashy State of the State address at Dodger Stadium, describing the various sites he'd seen in person.

Conservatives are among those taking credit for Newsom's shift. Fleischman said Newsom's Covid-19 science has morphed into political science, and the proof is in how the governor has handled his anti-recall campaign, which focuses more on attacking supporters of former President Donald Trump than on the governor's handling of the pandemic.

"Newsom has always been a very politically savvy person, and it makes total sense to me that when the political environment he's in changes, his policy changes," Fleischman said. "It's disingenuous for him to suggest that the reasons are otherwise."

In a few months, though, it might not matter what drove Newsom's recent reopening decisions, said Dan Schnur, the former head of the California Fair Political Practices Commission and now a politics professor at three California universities. A lot could change by then.

“The downside is everything he says and does will be viewed through a political lens until the recall is [in the past],” Schnur said. “The silver lining is, if what he’s doing works, voters won’t care whether his motivations were political or real world or some combination of the two."