No matter where the virus strikes, communities of color bear the brunt. 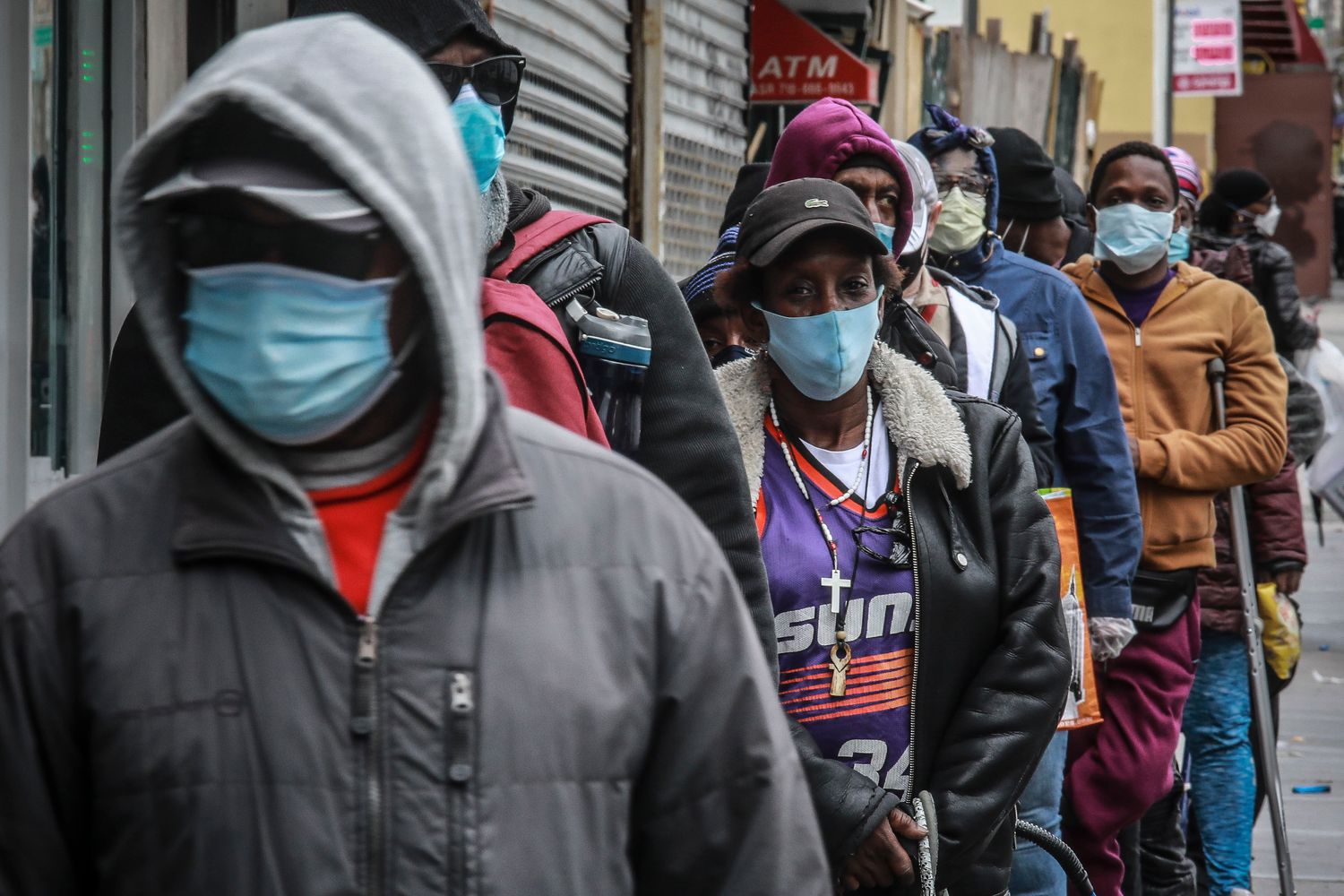 The story of Covid's trajectory isn’t blue to red. It’s Black and brown.

As the virus has shifted from coastal big cities to conservative states, political pundits and analysts have declared that “Trump country” is under siege.

But the politicization of the pandemic hides an enduring reality: It’s Black, Latino and Native American populations that are bearing the brunt of the disease.

“Despite the shift to red states, it's clear that the disproportionate impact is taking place in communities of color,” said Greg Millett, an epidemiologist and director of public policy at amFar, an AIDS research group that is monitoring the pandemic’s impact on minorities. “The one constant for this whole COVID-19 crisis is that communities of color remain at highest risk.”

The rapid rise of cases and hospitalizations in red states fed speculation that the economic and cultural fault lines that emerged early in the pandemic would disappear — that the spreading illness would elicit a more comprehensive response from the administration. Instead, over the July 4 holiday President Donald Trump again downplayed the virus’ danger, saying almost all cases were “totally harmless.”

They aren’t. From New York and California to Texas and Arizona — in urban and rural areas alike — people of color are suffering at greater rates, according to county data, state analyses provided to POLITICO by public health researchers, and interviews with more than a dozen experts. And ongoing gaps in data collection and lagging access in “testing deserts” make it hard to know truly how deep the problem runs.

Minority populations have long been underserved by health care and overburdened by the chronic diseases that heighten risk for coronavirus — a result of generations of racial inequities, high uninsurance rates, crowded housing and other social factors that contribute to poor health. The fact that minorities make up a disproportionate share of essential workers — who can’t work safely at home during the pandemic — adds even more risk.

“It's not that somehow we're genetically inclined to get [coronavirus],” said Millett.

Not only are infections high among minorities, but a report in late June from the Centers for Disease Control and Prevention found that Black and Latino Americans with coronavirus have been hospitalized at nearly five times the rate of white people. For Native Americans, the hospitalization rate is six times greater.

Arizona is a case in point. The state, where Trump made a campaign stop last month, has one of the highest caseloads in the country right now, and Latinos have been hard hit. In Maricopa County, which includes Phoenix, Latinos make up just under one-third of the population but account for half of the infections and 39 percent of hospitalizations. Nearly half the reported cases lack data on race and ethnicity.

Inequities are evident in less populated areas, too. Black Americans are nearly three times more likely than whites to live in rural testing deserts where deaths are increasing, said Sema Sgaier, executive director of the Surgo Foundation, which has been tracking access to tests. The vulnerability of rural regions is based on an index factoring in income, education, racially marginalized status, health care system and underlying health conditions.

“Not only are things getting worse but they’re getting worse-er for minority communities,” said Jorge Caballero, a Silicon Valley-based doctor and data analyst. “And when you zoom in to specific areas [you] get a picture of why this may be happening.”

Underneath the Red and Blue

In interviews, local doctors, officials and community advocates across Republican-led states said the mixed or diluted messages on masks and social distancing from state and federal leaders have made the crisis worse. They also noted that the virus has disproportionately slammed communities of color in red states that have not expanded Medicaid under Obamacare — leading many to delay seeking out health care until they're seriously ill.

In Alabama, which hit record hospitalization rates recently, Black people are 27 percent of the population — and nearly 45 percent of coronavirus deaths. Alabama’s governor has urged, but not mandated, wearing masks.

“The health disparities here in Alabama with regard to health care access was already a significant problem, and Covid-19 just made it worse,” said Dr. Ricardo Franco, a professor of medicine at the University of Alabama at Birmingham. “Basically, if you’re Black in Alabama, you’re almost twice as likely of dying of Covid-19 than if you’re white.”


Arkansas, which like much of the South dodged the worst of the pandemic in the spring and did not have a stay-at-home order, has seen cases nearly double over the past three weeks as more businesses reopened. No community has been harder hit than Latino and Marshallese workers in the northwest part of the state.

“We were not prepared to handle this pandemic at all, but we were especially unprepared to protect these minority groups,” said Greg Leding, a Democratic state senator who represents the area.

Mireya Reith, executive director of the immigrant advocacy group Arkansas United hopes the recent deployment of a CDC team to investigate disparities will mark a turning point. Inadequate testing and outreach to Arkansans of color early on, combined with a high proportion of essential workers unable to stay at home, fueled the spread.

“We weren’t counted. Data wasn’t collected. There was no information available in other languages,” she said. The outbreak, she added, “was preventable.”

The Arkansas health department confirmed that just five of its roughly 200 contact tracers speak Spanish and only one speaks Marshallese — though they will soon hire hundreds more tracers, some bilingual. Additionally, phone alerts that went out as part of contact tracing were all in English until a Spanish option was added June 6. There are still no alerts in Marshallese, isolating a population that migrated here in large part after U.S. nuclear tests left their homeland awash in radiation. The five-person CDC team dispatched to the state plans to share its findings soon on how to mitigate spread "specifically within the Hispanic and Marshallese populations,” the state’s health department told POLITICO.

Melisa Laelan, executive director of the Arkansas Coalition of Marshallese, surveyed nearly 1,000 Marshallese households and found that more than 80 percent had a family member designated an essential worker. More than half had a family member with diabetes, obesity or high blood pressure, conditions that increase their risk of death from Covid-19. Adding to their vulnerability, Marshallese were cut off from Medicaid during the 1990s.

“I had to leave Facebook because I couldn’t bear it anymore to see that we were losing so many important community members," Laelan said.

In Florida, where Trump is set to visit Friday for a briefing on drug trafficking, cases have surpassed 220,000. Coronavirus deaths in heavily Latino counties in Florida are occurring at twice the rate of other counties. In Texas, which Vice President Mike Pence visited last week, deaths in disproportionately Latino counties are occurring at 1.2 times the rate of other counties, according to an amFar analysis.

Cases are hitting record levels in some Democratic-led states too, notably California. But the different political sensibility didn’t shield people of color.

Los Angeles County is a big, racially mixed area. In the mostly white Santa Monica Mountains, cases per 100,000 rose sixfold from mid April to the end of June. But the rate of infection was even higher in majority Black and Latino cities, according to an analysis by Advancement Project California for POLITICO.

In San Jose Hills, where Latinos account for roughly 85 percent of the population, the number of cases per 100,000 was 143 times greater than it was during the second week of April. In Willowbrook, one of the communities in L.A. County with the highest percentage of Black residents, the rate of infections per 100,000 was 22 times greater in the third week of June than in early April.

Muddled messaging from the top

As cases surged across the South and Southwest in June, the response from state leaders was slow and inconsistent, some local and public health officials said. Republican governors have largely mirrored Trump’s response, declining to mandate masks or imposing and extending stay-at-home orders.

Some governors, despite earlier resistance, have paused or reversed reopening certain businesses in recent weeks, including those in Alabama, Arkansas, Arizona and Florida.

In Texas, Gov. Greg Abbott, after opposing mask mandates and even banning cities from enforcing such rules, changed his mind as hospitals reached capacity. He issued a statewide mask mandate, and expressed regret for reopening bars.

"It's really been inconsistent messaging that has made things complicated, if not dangerous," said Harris County Commissioner Adrian Garcia.

“I’ve said: ‘Wear your MAGA mask,’” Hidalgo, a Democrat, added. "This is not about politics."

In Alabama, “our state leaders have taken their cues from national leaders,” said Montgomery Mayor Steven Reed, who added that in June, 70 percent of new cases in Montgomery County were among Black people. He instituted a citywide mask mandate in mid-June, although Republican Gov. Kay Ivey hasn’t done so statewide.

READ:  Trump fights in states his campaign once insisted were a lock

In Arizona, Gov. Doug Ducey’s decision in late May to allow the state’s stay-at-home order to expire may have disproportionately hurt minorities — predominantly Native American and Hispanic populations saw a case rate 40 percent higher than the rest of the state.

A spokesman for Ducey’s office said his administration has "continued to enhance the [state's] guidance, including enforcement and mitigation efforts," adding that it emphasized getting resources to the hardest-hit communities, including the Navajo Nation and minority neighborhoods in Phoenix.

As early as April, the virus’ onslaught on African Americans in Michigan, New York and Wisconsin led public health experts to warn of what could be in store for minority communities. By mid June, cases among Latinos — who disproportionately work in essential services like agriculture, meatpacking and hospitality — started to skyrocket across the country.

“All Covid did was accelerate the inequities that we already know,” said Martha Moore-Monroy, a public health lecturer at the University of Arizona, whose work focuses on improving health in underserved communities. “People can’t ignore it anymore.”

Daniel Dawes, director of the Satcher Health Leadership Institute at Morehouse School of Medicine, is crafting a national plan to address the uneven impact of coronavirus on minorities — trying to change a pattern of inequality that has been a hallmark of other public health crises.

The three-year initiative, which has a $40 million grant from the federal Department of Health and Human Services and includes a network of national and local health organizations, will start in the South. It will gather research and aid Black communities in Georgia, address outbreaks among incarcerated populations in Louisiana, and improve health and information dissemination in Navajo Nation and among migrant workers in Texas. By Year Two, Dawes hopes to focus on vaccine education and access.

In the meantime, local officials are getting creative. In Georgia — where Black people make up a third of the population but nearly half the Covid deaths — DeKalb County chief executive Michael Thurmond realized he needed a better messenger for young people.

“They’re not listening to an old guy like me,” said Thurmond, who asked rapper Killer Mike to cut a PSA for Black radio stations. He did the same with a Spanish-language ad for Latino radio stations, featuring local DJs and radio personalities.

“I don't know whether we can stop it at this point,” she said. “This whole epidemic has brought us to our knees.”

Maya King contributed to this report.