A new POLITICO/Morning Consult survey finds those who voted for the president want to shield certain immigrants from deportation. 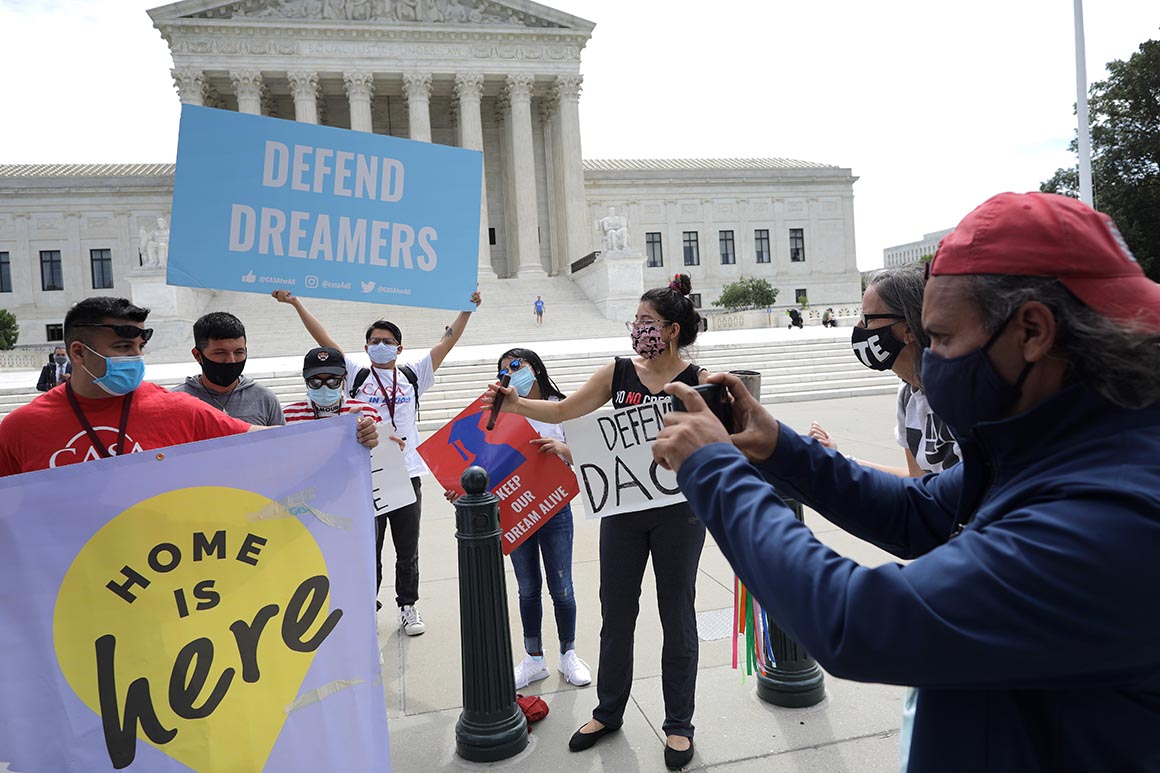 A majority of Trump voters want to protect so-called Dreamers from deportation, according to a new poll, putting pressure on President Donald Trump to shield immigrants who were brought to the country illegally as children.

The same trend holds across all Republicans, according to the findings from the latest POLITICO/Morning Consult poll. In fact, the poll indicates that wide swaths of registered voters support Dreamers regardless of gender, education, income, ethnicity, religion and ideology. That includes 68 percent of Republicans, 71 percent of conservatives and 64 percent of those who approve of the job Trump is doing. Even 69 percent of those who voted for Trump in 2016 — when he vowed to deport Dreamers — say they should be protected.

The findings highlight a looming political challenge for Trump as he runs for a second term, partly to make good on his promises to immigration hard-liners while looking to appeal to Hispanics and slicing into the advantage Democrats have with them.

Any day now, the Supreme Court is expected to allow Trump to shutter the Obama-era program known as Deferred Action for Childhood Arrivals, forcing the president to make a decision on Dreamers less than five months before voters head to the polls.

“As Congress awaits the looming Supreme Court decision on DACA, nearly two-thirds of voters — driven by Democrats and independents — believe Dreamers should be allowed to stay in the U.S. and given a pathway to citizenship,” said Kyle Dropp, co-founder and chief research officer at Morning Consult.

Trump is considering slowly winding down the program and using the looming end point as leverage to try to strike an elusive immigration deal with Democrats. Already, Jared Kushner, the president’s son-in-law and senior adviser, has floated including DACA as part of a broader immigration package after the Supreme Court ruling, two people familiar with the conversations previously told POLITICO.

Trump has previously offered legislative proposals that would give Dreamers permanent legal protections in exchange for some of his hard-line immigration priorities, including cuts to legal immigration and border wall funding. But the offers failed in part because the president himself backed away after facing opposition from immigration hawks who accused him of going against his own campaign promise.

Roy Beck, president of NumbersUSA, which supports immigration restrictions, said his group supports proposals that offer legal status to Dreamers as long as they come with workforce enforcement measures, including E-Verify, an electronic system that allows businesses to check the work authorization of their employees. “We’ve acknowledged that most of the Dreamers have a compelling case,” he said.

Registered voters are split on whether they trust Trump or Joe Biden, the presumptive Democratic presidential nominee, to handle the issue of immigration, according to the new POLITICO/Morning Consult poll. Forty-three percent say they would trust Biden, compared with 41 for Trump. Fifteen percent don’t know or had no opinion.

Biden, who was vice president when DACA was created, has vowed to reinstate the program and allow Dreamers to receive federal student aid, calling Trump’s decision to end the program “cruel and counterproductive.”

READ:  Hillary Clinton to Biden: Don't concede if the election is close

“Immigrant youth are not a negotiating chip,” he wrote in a statement this week to mark the eight-year anniversary of the program. “They are not disposable.They are an integral part of the American fabric. Their story is our story, and their struggles are our struggles. Donald Trump and the Republicans in Congress should stop threatening their lives for political gain.”

Biden, who has faced criticism for the number of immigrants deported during the Obama administration, has vowed to reinstate DACA within his first 100 days as president and work with Congress to create a pathway to citizenship for the 11 million immigrants in the United States illegally.

The poll indicates that the issue of immigration falls largely along partisan lines, though Trump garners more support from Republicans than Biden does with Democrats. Eighty percent of Democrats say Biden would handle immigration best, while 85 percent of Republicans say Trump would. Moderates favored Biden over Trump, 48 percent to 32 percent.

Trump made cracking down on immigration the centerpiece of his 2016 campaign, promising to build a wall on the southern border with Mexico, deport millions of migrants who arrived in the country illegally and end DACA, which provides renewable work permits to Dreamers.

But Trump’s rhetoric on immigration and DACA has wavered as president. When he moved to end DACA, Trump spoke of his “great heart” and “great love” for Dreamers. He then offered a six-month wind-down period designed to give Congress time to pass legislation to make the program permanent.

His stance appeared to change again, however. Just last November, he lashed out at Dreamers on Twitter, saying that “they are far from angels.”

READ:  How Biden is betting on Buttigieg to drive a new era of racial equity

“The president is, months before an election, doing absolutely everything within his power to see DACA ended and DACA recipients subjected to immediate deportation, an issue where only one in eight Americans support his position,” said Todd Schulte, president of FWD.us, a group working to protect Dreamers.

Business executives, donors and Republican leaders have long urged Trump to show compassion for Dreamers. Since 2018, the number of those who say Dreamers should be allowed to become citizens if they meet certain requirements has increased slightly, to 61 percent from 58 percent.

But it will be nearly impossible for a divided Congress to tackle immigration in an election year, given the historic intractability on the issue and the current focus on responding to the coronavirus pandemic and police brutality. Democrats are also suspicious of any immigration deals with Trump and want to wait to see whether their party wins back the White House and Senate in November.

After Democrats took control of the House in 2019, the lower chamber did pass a bill, largely along party lines, to provide legal status and eventual citizenship to 2.3 million Dreamers, including DACA recipients. The Senate, which needs 60 votes to pass legislation, has ignored it.