The trip to Washington would come as the U.S. plans a controversial drawdown of troops in Germany. 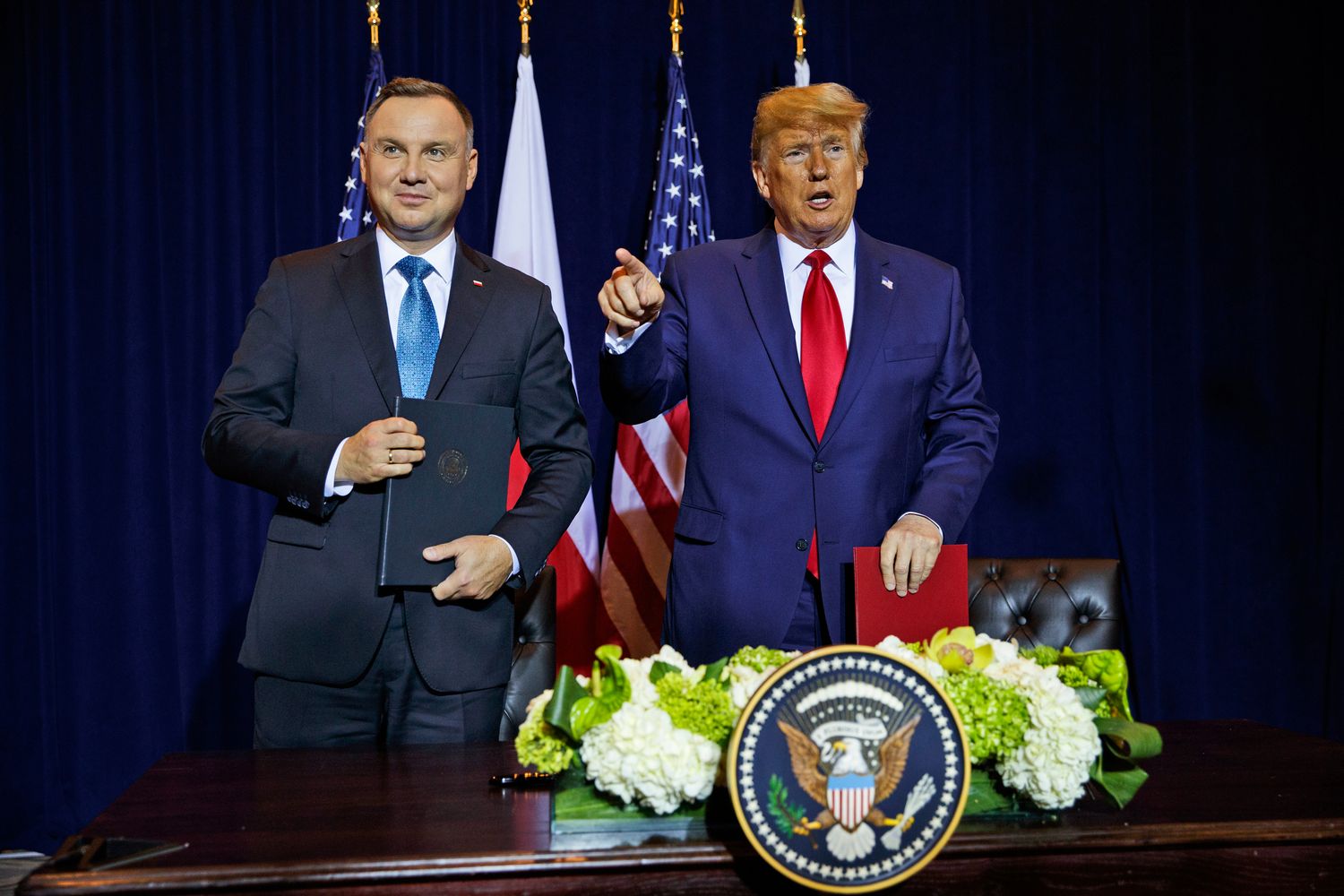 President Donald Trump may soon be welcoming foreign leaders to the White House again after a pause due to the coronavirus pandemic, and his aides are in talks to host the president of Poland, U.S. and Polish officials said.

A visit by Poland’s Andrzej Duda, if finalized, is likely to coincide with Trump’s plans to announce an increase in the number of U.S. troops stationed in Poland. But it also comes at a sensitive time for Duda, who is up for reelection on June 28.

Close observers of the relationship expressed surprise at the possibility of a Duda visit.

“Duda has done a good job with the Trump administration and President Trump. But Poland is in the final days of a presidential election, with Duda facing strong competition from several credible candidates,” said Daniel Fried, a former U.S. ambassador to Poland in the Clinton administration who is now at the Atlantic Council. “A Duda visit now would be seen as the U.S. playing a partisan role in Poland. Not a good idea.”

It’s not clear what sorts of precautionary measures will be taken due to the pandemic if Duda stops by the White House, such as whether or not he will wear a mask. Trump has avoided wearing a mask in public, despite recommendations from U.S. health officials that people do so.

READ:  How the U.K. will rollout the coronavirus vaccine

A Trump administration official told POLITICO that the Polish leader could visit as early as next week, though another U.S. official said only that a visit by Duda was expected “soon.” And a Polish government official also confirmed there were discussions underway, with troops and a defense deal dubbed “Fort Trump” on the agenda, but did not know exactly when the meeting would take place.

White House National Security Council spokesman John Ullyot declined to comment Tuesday, while State Department officials did not respond to emails or referred POLITICO to the White House. A spokesman for the Polish embassy said it didn’t “have any information about any visit in coming days.”

Duda has earned criticism recently for saying that the LGBTQ movement is spreading ideas that are worse than communism. Duda is allied with the ruling Law and Justice Party, which has a conservative agenda that LGBTQ activists say targets them.

The Polish government has maintained a relatively good relationship with the Trump administration, at least when compared to Western European allies such as Germany. Critics of Trump’s handling of the relationship say the U.S. administration has not done enough to push back against the Polish ruling party’s autocratic tendencies.

The Polish visit would take place as Trump plans to cut U.S. troop numbers in Germany by more than 9,000 while increasing the U.S. troop presence in Poland. The plan is “coming soon” and will be larger than expected, according to U.S. Ambassador to Poland Georgette Mosbacher.


Trump has said he won’t change his mind about withdrawing troops from Germany; he insists that Germany is not paying its fair share of costs for NATO, though a voluntary agreement for member states to boost their defense spending has set 2024 as the goal. His plan to reduce the troop numbers is drawing fierce opposition in Congress, including from Republicans.

Senior Pentagon leaders were caught off guard by the decision to withdraw troops from Germany, which is the permanent home to roughly 35,000 U.S. service members and their families and serves as a critical staging base for operations in Europe, the Middle East, and Africa, according to one senior defense official. The department has not yet been given any orders to begin bringing home any units, another U.S. official said.

Poland also likely does not have the capacity to absorb nearly 10,000 troops from Germany and their families on a permanent basis, Hodges said.

“This whole thing was a political decision, not the result of the traditional disciplined interagency process and no strategic analysis led to it,” Hodges said. “So you can imagine that the staffs at European Command and U.S. Army Europe and U.S. Air Forces Europe are really hustling right now.”