For one thing he hasn’t messed up yet. 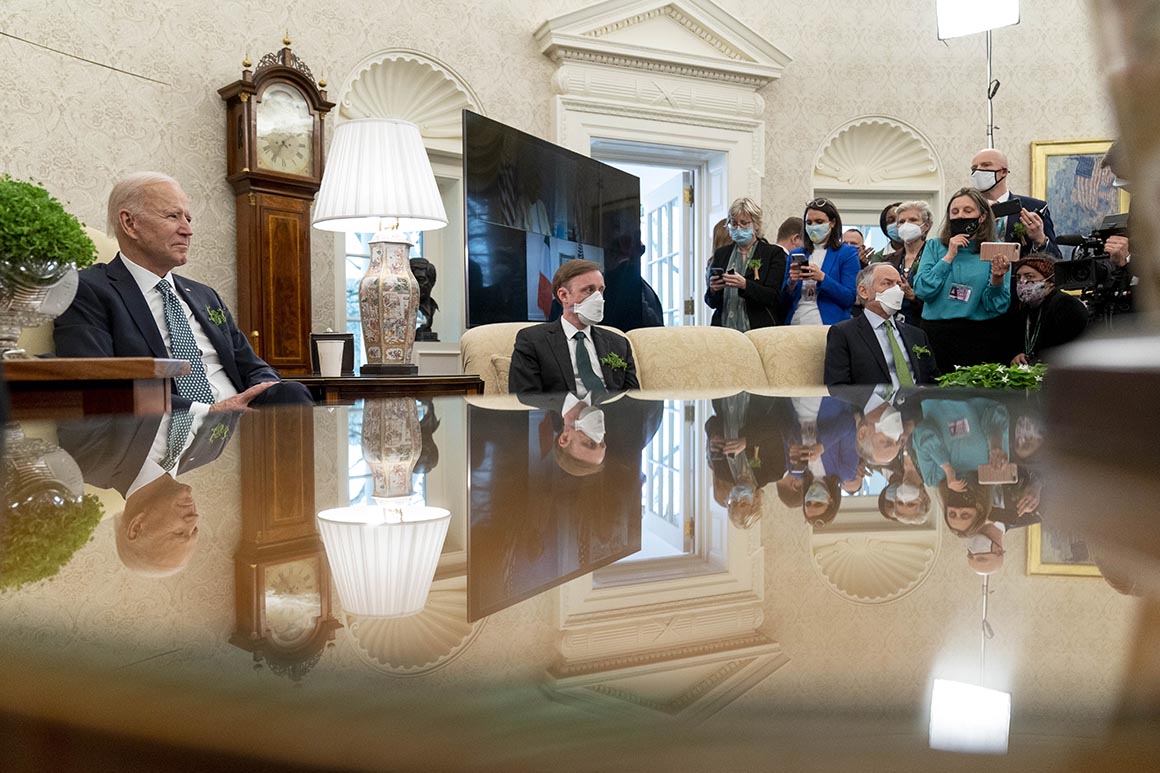 This time four years ago, the Trump administration had already burst its banks with sensational, revealing and damaging leaks. The Washington Post had reported the dodgy phone conversations between President Donald Trump’s pick for national security advisor, Michael Flynn, and Russian ambassador Sergey Kislyak. An executive memo about reestablishing CIA “black site” prisons had appeared in the New York Times. Trump advisers candidly—though anonymously—gossiped with the New York Times about the president’s “impetuous,” impulsive ways and his reliance on “alternative facts.” And a confidential White House request that the FBI publicly discredit reports of Trump campaign connections to Russian intelligence seeped onto CNN.

In comparison, the Biden White House has been as tight as an airlock on the International Space Station. This absence of leaks has fed the press corps’ hunger for a presidential press conference—a desire for him to say something, anything, to fill the silence.

Although the press also screamed for Trump pressers (he held one in the first year), the need wasn’t as great as he and his administration vented leaks and on-the-record comments with the vigor of an active Icelandic volcano. Given the attention paid to President Joe Biden's first formal presser Thursday, it’s instructive to compare his relatively leak-free first two months in the job to the Trump White House’s opening months.

What’s been Biden’s no-drip secret? To begin with, he ran a relatively leak-free presidential campaign, mirroring the leak-avoiding practices of the Obama administration, in which he served. As one prone to gaffes, it probably wasn’t easy for him to zip it, but it has seemed to become second nature to him. Running his campaign from his basement, Biden didn’t feel the need to leak to place himself in the news. If he wanted attention, he could command the press corps’ focus quickly and efficiently. The lesson extended to his staff, which tended to keep traps shut and not fill the blanks with anonymous comments for insistent reporters. In December, Biden Press Secretary Jen Psaki made this covert strategy overt when she promised the new administration would speak with one voice, a direct dig at the back-stabbing and duplicitous leaking that typified the Trump presidency.

One reason Biden has been able to stall on holding his first presser until now is because his message discipline has defused the drama created by the Covid-19 pandemic and the trillions of dollars in relief. The Biden people have their point and stick to it.

The Trump administration leaked so copiously because he had assembled not a team of rivals to serve under him but a team of enemies, who used the press to fight their policy battles and wage psychological warfare on each other in public. For example, the Javanka faction in his White House advanced a personal PR agenda separate from the president’s, and their White House enemies were forever leaking information about the power couple to disable them. Biden, who has no analogous warring factions, has had an easier time keeping the peace.

Trump both craved and reveled in these internal deathmatches, something you can’t imagine Biden doing. Trump was forever calling his kitchen cabinet of corporate titans and irregulars like Steve Bannon, Roger Stone, Rudy Giuliani and Sean Hannity for advice and gossip, and those conversations tended to leak. Biden, on the other hand, tends not to go off-site for counsel; his closest advisers have been the same people for decades, and they're installed physically close to him in the West Wing. With fewer people in fewer places tasting the unadulterated Biden, less gossip flows to reporters. Finally, Trump was notorious for not keeping up on his reading. If an aide wanted to direct his attention to some issue, often the best way to do so was to get it to his boss on TV, leaking the material to reporters so Trump would see it on cable news. This put Trump on both the supply and the demand sides for leaks.

Then, of course, Trump himself was a born leaker. (Who can forget his enthusiasm for the WikiLeaks dumps on the Democrats?) Long before his presidency, Trump nourished the New York press corps with blind quotes about his competitors, celebrities, public policy, fashion, crime, whatever fit his fancy, sometimes using the nom de gossip of “John Barron” or “John Miller” to plant stories. In his 2018 book, The Trump White House: Changing the Rules of the Game, journalist Ronald Kessler maintains that Trump managed the news by calling reporters and feeding them inside dope that he insisted be attributed to “a senior White House official.” Kessler continues, “In other cases, the media has picked up reports on what Trump himself has said to his friends.”

The most reliable non-Trump spigot for leaks was top adviser Kellyanne Conway, Kessler wrote, and her example inspired others in the White House to leak. The more Trump aides leaked and the more they got away with it—remember how one mid-level Trumpie wrote an anonymous New York Times op-ed about the Trump White House and then a whole book?—the more they did it. It’s only a slight exaggeration to say there were more leakers than non-leakers in Trump’s universe.

Trump and his Trumpies believed in government by titillation, to constantly arouse the masses with shocking information to either draw attention away from some crisis or to put Trump back in charge of the news cycle. Biden’s natural instincts have been for the sober—more tea than tequila. It’s easy to speculate, too, that the dour, dutiful and dull policy soundings emanating from his White House are a deliberate attempt at counterprogramming, designed to muffle the excitement that Trump insisted on staging. Then again, the Trump administration leaked so porously because Trump and his aides were routinely engaged in conduct that was eminently leakable. By giving so many cabinet officers and high-ranking officials the mean side of his boot, Trump made certain that they would settle their grudges with him by leaking.

It really was a runaway presidency. The Flynn calls, the “black sites” memo, and the instructions to the FBI to discredit Russian interaction were only early examples. Later Trump outrages—his comments about “shithole“ countries; his disclosure of classified information to visiting Russian dignitaries; the unorthodox processing of Jared Kushner’s security clearances; the transcripts of his cockeyed phone conversations with the leaders of Mexico and Australia; and on and on—were all prime dish for reporters. Inside sources who dissented from Trump’s policies and conduct stood ready to undermine his overreach by dropping a dime on him. Biden might be engaged in similar overreach, but if so, his people haven’t reached the leaking point. Their relative silence, even as they wrestled the $1.9 trillion relief python through Congress, implies a unanimity behind the scenes with whatever Biden is doing in public. In general, people don’t leak when things are going well—and Biden’s approval rating signals that despite a suite of big issues they are going well.

Axios’ Jonathan Swan, who has written intelligently on the subject, holds that the culture of the Trump White House dictated that one should leak before they got leaked on. Some Trump leaks followed policy disputes in which the frustrated loser blasted the winner one last time to get even. “By leaking the decision, the loser gets one last chance to kill it with blowback from the public, Congress or even the President,” one anonymous source told Swan. So far, such disputes in the Biden administration have remained off stage, tamped down before they can get leaked.

This is the first time I’ve written about leaks without quoting Stephen Hess and his fine book on the subject. Please give it a read. Send book recommendations to Shafer.Politico@gmail.com. My email alerts have teamed up with my Twitter feed in a leak campaign against my RSS feed. My RSS feed says, “Bring it on.”