Don’t expect a monument to the Covid casualties. We’re wired to forget events too large, or random, to comprehend. 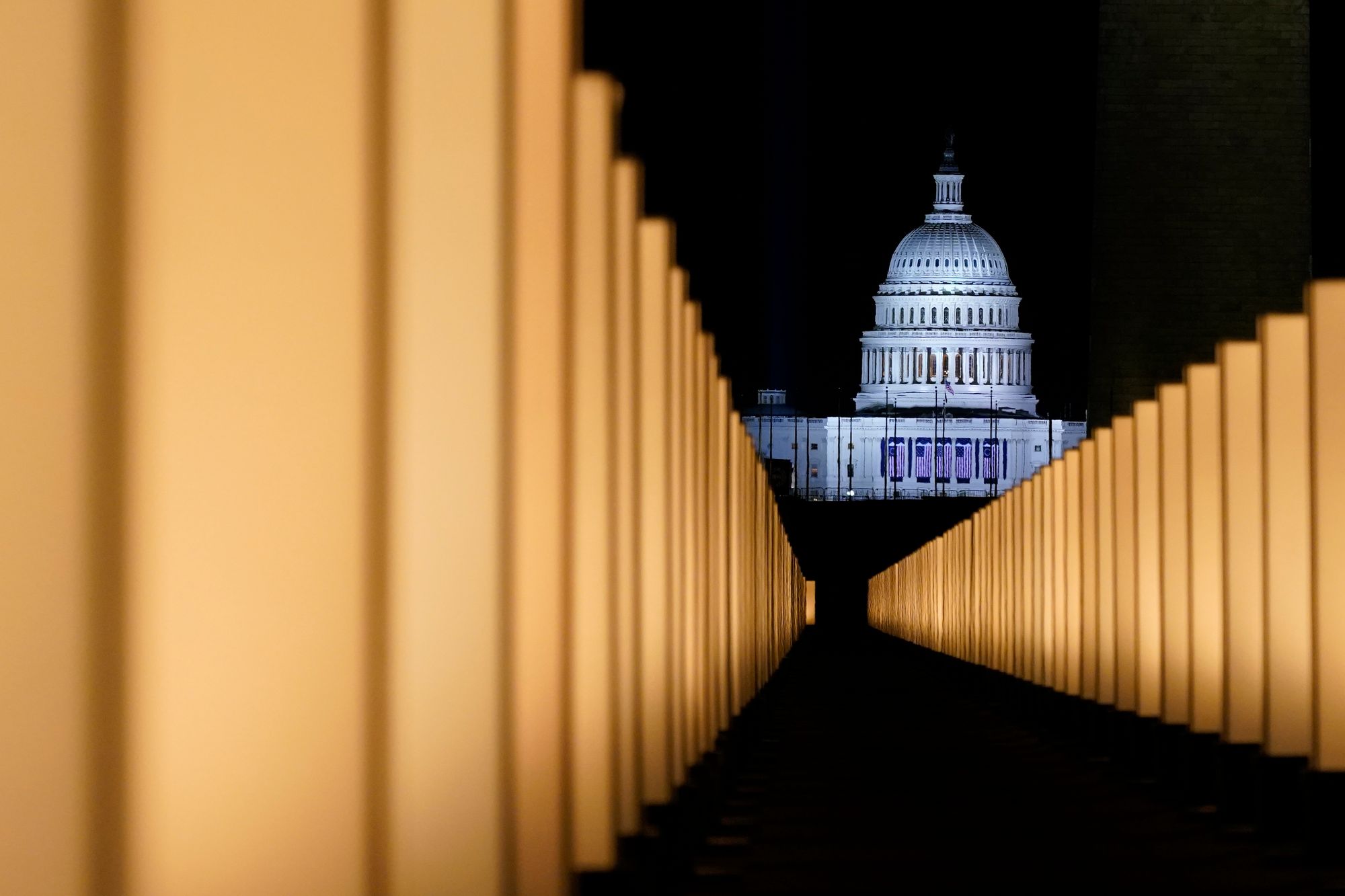 The medical holocaust that is the Covid-19 pandemic—500,000 dead in the United States and 2.5 million worldwide—hasn’t even hit our rearview mirror yet. But as acquired immunity and vaccinations take hold, as the death rate and hospitalizations taper, and as normality returns as a life option, what sort of cultural dent will the outbreak, which has so far claimed numbers equal to the total population of Atlanta, leave in the American psyche? Will we build special places in our palace of memories for our recollections of the plague? Write panoramic novels about disaster? Gather our children around campfires and tell them tales about the deadly struggle? Build monuments to the fallen?

Surely somebody will attempt to mark the cataclysm with a play or an art work, but the odds are long that the effort will stick. Despite the year-long dislocations and the saturation media coverage, the trauma of the coronavirus pandemic will soon recede, more likely than not, and fade like painted advertisements on brick walls, leaving behind only a flicker of the current terror. We will nod gravely when reminded of the losses suffered and share the stories of friends and family who died too soon. But in the absence of a media prompt or other reminder, we will sequester the Covid-19 pandemic in history books and refer to it mostly when fresh viral eruptions strike. We will forget about it.

It’s not like we haven’t been through this before. Writing in the 1940s, critic and essayist H.L. Mencken noted that despite the “enormous mortality” of the influenza pandemic of 1918 and 1919, which killed 675,000 Americans and 50 million in the entire world, it “is seldom mentioned, and most Americans have apparently forgotten it. This is not surprising. The human mind always tries to expunge the intolerable from memory, just as it tries to conceal it while current.” Mencken was personally acquainted with at least 20 who perished in the pandemic, including the brother of his business partner. His biographer Marion Elizabeth Rodgers writes that at the height of the plague, Mencken could see funeral wagons trundling the dead to nearby cemeteries from his Baltimore home.

READ:  Meadows dismisses Hatch Act concerns at RNC: 'Nobody outside of the Beltway really cares'

Why did memories of that plague pass from memory so briskly? In his 1976 book, America’s Forgotten Pandemic: The Influenza of 1918, Alfred W. Crosby theorizes that it was because the flu outbreak overlapped with a world war. Flu obituaries, which filled the pages, blurred with the equally long casualty lists from Europe, creating one massive, undifferentiated list of the dead. Also, the disease moved quickly through the population and vanished before its full danger could be realized. Polio or smallpox, which killed and left visible traces on its survivors to remind people of its power, conveyed greater fear. “No one ever took years to die of flu,” Crosby writes, and most of the stricken survived. Finally, few if any famous individuals died from the flu, so the press did not memorialize its many martyrs in large type.

The newspapers of the teens downplayed the contagion, as John M. Barry reports in his book, The Great Influenza, which complicates any attempt to fully analogize the two outbreaks. When the flu finally passed, it took with it many of the memories associated with it, leaving only a cultural blank behind. Only two monuments to the flu appear to have been erected, and they were late-comers: a Barre, Vt., granite bench in 2018 and a New Zealand plaque in 2019. Such novelists as Wallace Stegner, Willa Cather, Thomas Wolfe, John O’Hara, Mary McCarthy, and William Maxwell touched on the topic in their fiction, but F. Scott Fitzgerald and Ernest Hemingway steered wide of the disaster. The only writer of note to witness the influenza pandemic of 1918 and address it at length was Katherine Anne Porter, but then only in an autobiographical novella published in 1939. Famous historians largely passed over the topic in their college textbooks, too, Crosby adds, and the Readers Guide to Periodical Literature devoted more column inches to baseball than it did the flu in its 1919-1921 index. Tellingly, Dr. William Carlos Williams, who conducted 60 medical calls a day as the pandemic raged, never exploited the virus for his poetry.

The AIDS crisis received more concentrated attention from Broadway (The Normal Heart; Angels in America) and Hollywood (Philadelphia) than the 1918 influenza pandemic did in its era. Given the socio-racial inequities of this pandemic and Donald Trump’s mismanagement of it, the potential for a Covid-19-themed work of art exists, but will its target be the pandemic or Trump? Timeless works of fiction demand an identifiable villain, and acts of nature like a killer virus don’t fill that bill.

The cultural vogue to commemorate and memorialize has expanded since 1918, with monuments springing up everywhere to mark important events, so pop-up Covid-19 monuments may be in the offing. During Inauguration Week, Joe Biden and Kamala Harris observed moments of silence alongside their spouses at the Lincoln Memorial reflection pool, where 400 lanterns temporarily marked the deaths of 400,000 from the virus. The New York Times has already venerated the Covid-19 dead with two tributes, the first being a May 2020 complete list of the first 100,000 Americans to die from the virus, which took up all of Page One before it jumped inside, and the second, a graphic published Sunday that represented each of the first 500,000 to die with a black dot.

But these acts of commemoration aren’t likely to lead to permanent monuments where we gather for reflection. By convention, we erect most of our monuments to salute the heroic spirit, or acknowledge acts of sacrifice of statue-genic soldiers, police, and firefighters or illustrate national ideals, such as the Statue of Liberty or the Gateway Arch. Since the 9/11 attacks especially, first responders have deservedly acquired heroic stature they never possessed before, so we can expect that the medical responders—from doctors to janitors—who died from Covid-19 might be memorialized in granite sometime this decade. But the other 500,000? Even if they struggled heroically for their lives on their deathbeds, we’re not likely to formally institutionalize the memory of their passing because it’s not our way. We quickly forgot the influenza pandemic of 1918, recalling most palpably only when similar viral threats surfaced in 1957, 1976 and 2003, but then put the deaths out of mind as the crises passed. Our stinginess about building shrines to honor of people who died from disease is illustrated by our reaction to the AIDS catastrophe. The AIDS quilt marked the deaths from that epidemic in the late 1980s, touring 20 cities. (As of last year, the quilt had grown to 1.2 million square feet and is stored in warehouse in Oakland, Calif.) Yet no permanent monument to the 700,000 Americans (and counting) to die from that virus exists, although an initiative to build such a place has take root in Southern California.

“Everybody knows that pestilences have a way of recurring in the world, yet somehow we find it hard to believe in ones that crash down on our heads from a blue sky,” Albert Camus wrote in The Plague. “There have been as many plagues as wars in history, yet always plagues and wars take people equally by surprise.” Would building a monument to the Covid-19 dead increase our vigilance and keep our minds primed for the challenge posed by the next viral wave? Probably no more than the 9/11 Memorial and Museum have done to safeguard us from another attack. But that doesn’t mean we shouldn’t try.

One fitting gesture would be to commission larger-than-life statues of a man and woman in lab coats to honor the scientists who, working around the world, created in less than a year a half-dozen authorized vaccines that will make the virus kneel. As great as any hero who stormed a beach or rescued a drowning child, the vaccine-makers deserve this tribute. By honoring them and preserving their hope-engendering heroism, perhaps we can remember this outbreak in a way that will help prevent or stall the next one.

I haven’t gotten my jab yet. Send vaccines (two doses, please) to Shafer.Politico@gmail.com. My email alerts went anti-vaxx before it was trendy. My Twitter feed regrets not getting the shingles vaccine. My RSS feed insists that its vaccines be psychoactive.