An open letter to a member of Rupert Murdoch’s board of directors. 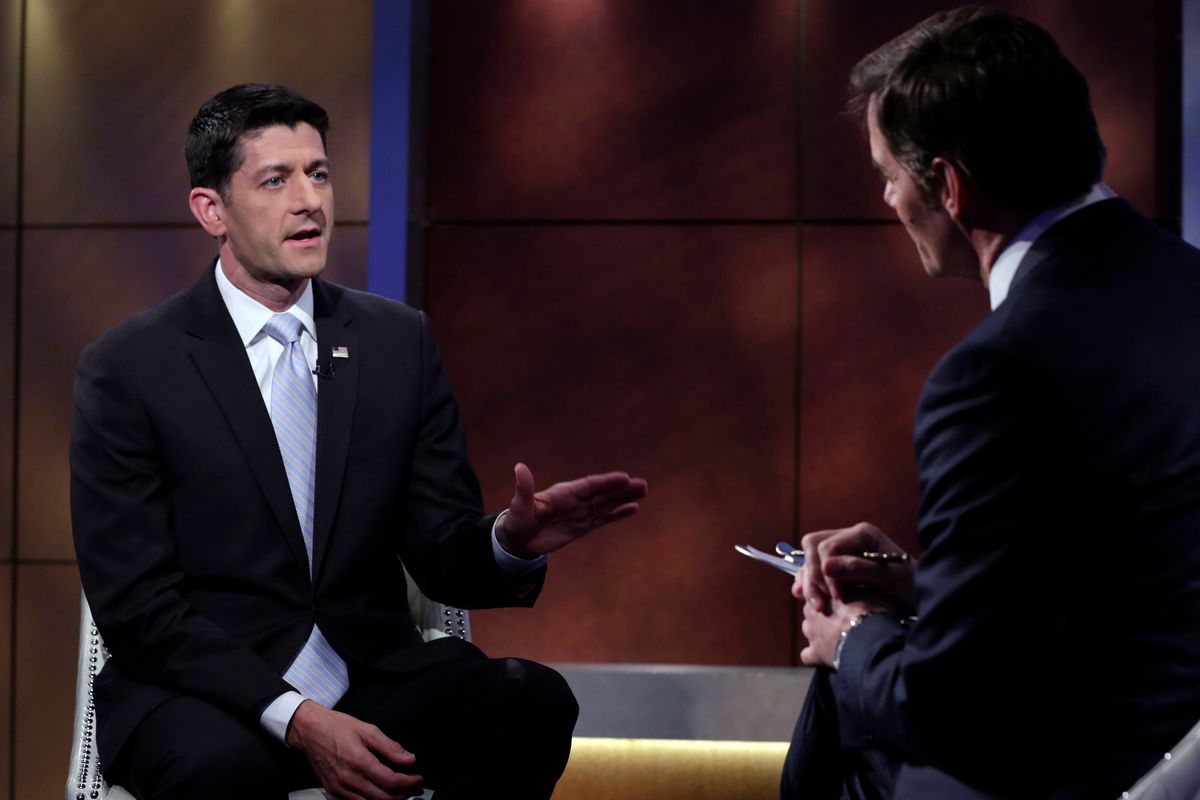 I’m often asked whether we are still friends. I usually answer: Yes, but we’re taking a break and seeing other people.

I’d like to talk to you about some of those other people today, specifically your colleagues at Fox.

You’ve undoubtedly been following what is happening there. You know how bad it has gotten. But unlike most of the rest of us, you are in a position to do something about it. And if you ever hope to have influence on the direction of either the network or the conservative movement, this is the moment to speak up.

When you were first named by the Murdochs to the Fox Corporation’s board in 2019, Vanity Fair speculated you might use that influence to counter the increasing Trumpiness of Fox News. “Paul is embarrassed about Trump and now he has the power to do something about it,” the magazine quoted one executive saying.

The Former Guy himself certainly thought you had influence. After several pundits on Fox pointed out his disastrous performance in last year’s first presidential debate, Trump blamed you. He tweeted out: 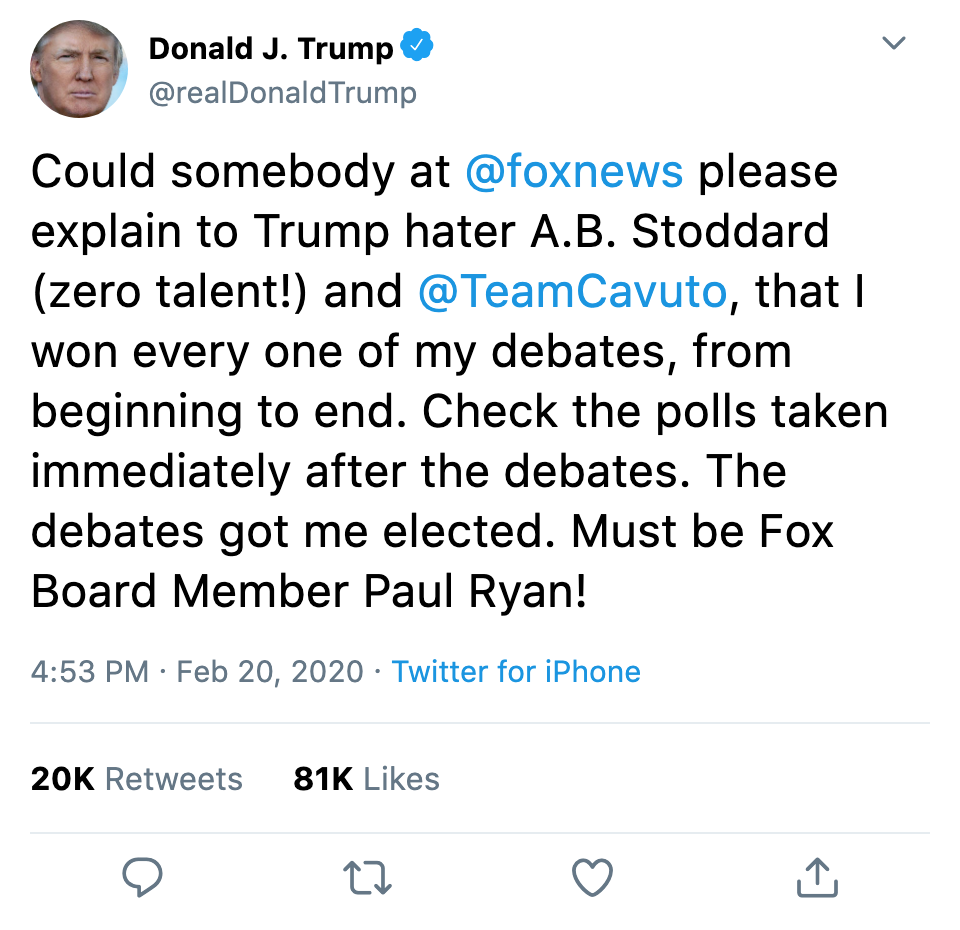 Honestly, I don’t know if you have made an attempt to steer Fox News at all. Maybe you think your responsibility is merely to the corporate bottom-line. But if you have ever thought of having any influence, the recent drift of Fox News deeper into the dark waters of raw racism and disinformation, makes this question especially urgent:

If not now, when?

Unlike the Trump tweets that you pretended not to read, you know what Tucker Carlson has been saying lately.

For months (years?) Carlson has been dancing on the edge of white nationalism.

He has suggested that immigrants make America “dirtier.” He has defended the QAnon conspiracy theory. Last year, he lashed out at two Democratic members of Congress, Rep. Ilhan Omar of Minnesota and Sen. Tammy Duckworth of Illinois. Citing their immigrant backgrounds, Carlson mused, “Maybe we are importing people from places whose values are simply antithetical to ours.”

And then, a few days ago, he made the racism explicit when he used his Fox news platform to embrace the so-called “replacement theory.” As the Anti-Defamation League’s Jonathan Greenblatt pointed out, the replacement theory “is a white supremacist tenet that the white race is in danger by a rising tide of non-whites.”

“It is anti-Semitic, racist and toxic,” Greenblatt explained. “It has informed the ideology of mass shooters in El Paso, Christchurch and Pittsburgh.”

Carlson’s on-air comments made it clear that he knew precisely what lines he was crossing. In case you didn’t catch the show, let me share the lowlights.

“I know that the left and all the little gatekeepers on Twitter become literally hysterical if you use the term ‘replacement,’ if you suggest that the Democratic Party is trying to replace the current electorate — the voters now casting ballots — with new people, more obedient voters from the Third World,” Carlson told his roughly 3 million viewers. “But they become hysterical because that's what's happening, actually. Let’s just say it. That’s true.” [I’ve added the emphasis but I shouldn’t need to. We’ve long passed the need to translate Carlson’s dog whistles.]

Carlson has continued to push the idea: “If you change the population, you dilute the political power of the people who live there,” he said later. “So every time they import a new voter, I’d become disenfranchised as a current voter … Everyone wants to make a racial issue out of it. Oh, 'white replacement.' No. This is a voting rights question. I have less political power because they’re importing a brand-new electorate. Why should I sit back and take that?”

“Make no mistake: this is dangerous stuff,” Greenblatt wrote in the letter, addressed to Fox News CEO Suzanne Scott. “The ‘great replacement theory’ is a classic white supremacist trope that undergirds the modern white supremacist movement in America. It is a concept that is discussed almost daily in online racist fever swamps.”

“Given his long record of race-baiting,” Greenblatt wrote on behalf of the ADL, “we believe it is time for Carlson to go.”

You know the rest. Fox stood solidly behind Carlson. In a letter to Greenblatt, Lachlan Murdoch, one of two Murdochs on the seven-member board, insisted that Carlson had “decried and rejected replacement theory,” because he was actually talking about “a voting rights question.”

His remark prompted The Atlantic’s Adam Serwer to comment, “I’m not sure how much more explicit you want Tucker to get than ‘repealing race-based restrictions on immigration that inspired Nazi Germany was an attack on American democracy.’”

In his response to the ADL, Murdoch insisted that the Fox Corporation “abhors anti-Semitism, white supremacy and racism of any kind.”

But as long as Fox continues to feature Carlson, you know that’s pure gaslighting, because you know how to recognize bigotry.

In the “before times,” you also knew how to call out the hate.

In 2015, when then-candidate Trump called for a ban on all Muslims entering the country, you went to the RNC offices on Capitol Hill to declare: “This is not conservatism.”

The next year, when Trump impugned the impartiality of U.S. District Court Judge Gonzalo Curiel because of his “Mexican heritage,” you called it “the textbook definition of a racist comment.”

READ:  More than 35,000 mail-in ballots were rejected in Florida primary

And you might recall when you came on my old radio show and I asked you about a Trump tweet featuring a six-pointed Star of David next to Hillary Clinton’s face and the words, “Most Corrupt Candidate Ever!”

“Look, anti-Semitic images, they’ve got no place in a presidential campaign,” you told me. “Candidates should know that.”

Even though you had reluctantly endorsed Trump, you emphasized that “most importantly, as you know, one of the few times I spoke out against him during the primary very forcefully was in this area, when he failed to disavow supremacists, white supremacists. And so, look, I’ve made this really, really clear.”

But Trump won, and you made your peace with him; you made the decision to keep your criticism of his behavior private. You made a bargain. Your mantra was: “Only one person can be Speaker of the House.”

We talked about it and agreed to disagree. You had an institutional role to play and a majority to protect. But now we have to reckon with the damage the Trump presidency has done to our politics and culture.

“We have a responsibility to try and rebuild,” you told Tim Alberta in 2019, a few months after you retired.
“Our job from now on is to build up the country’s antibodies ... to have the guardrails up, to drive the car down the middle of the road, and don’t let the car go off into the ditch.’"

Well, now you have the chance to do that. None of the calculations that underlay your bargain with the Trump presidency apply any longer. Once you left Congress, you were no longer responsible for keeping a Trumpian caucus in line or in power, or, as you told Alberta, “to help the institution survive.”

But your silence then meant you had to watch the GOP transform itself into the image of the Former Guy; a party that, in your own words has become “isolationist, protectionist, and kind of semi-xenophobic, anti-immigrant.” Since then, the GOP has gotten worse—more divorced from reality, hostile to democratic norms, and willing to dabble in ugly conspiracy theories and noxious white nationalist narratives.

So this is why I am writing to you now:

Undoubtedly, you are enjoying your sojourn in private life, but you have already shown a willingness to step back into the arena when the threat is grave enough.

In January, you issued a public statement warning that “Efforts to reject the votes of the Electoral College and sow doubt about Joe Biden’s victory strike at the foundation of our republic.”

You saw what was happening and couldn’t remain silent. “It is difficult to conceive of a more anti-democratic and anti-conservative act than a federal intervention to overturn the results of state-certified elections and disenfranchise millions of Americans,” you said. “The fact that this effort will fail does not mean it will not do significant damage to American democracy.”

READ:  Gavin Mussolini, the ‘Superhero Pirate’ and the Ragtag Campaign that Could Take Down California’s Governor

But that damage continues, and you can’t escape the harsh fact that you are part of it by presiding over a corporation that continues to dump toxic disinformation into the body politic.

Paul, your position right now is unique. You are not just the former vice-presidential nominee of your party and the former speaker of the House. You sit on the board of directors of the media company that is shaping and distorting the future of the movement to which you have given your life. It is spreading vicious racist tropes. It has become a vector of disinformation about the pandemic that is putting human lives in danger. Polls now find that 45 percent of Republicans say they don’t plan to get vaccinated. As a ballpark figure, based on the number of people who voted for Trump, that’s about 36 million people.

Many of them got their information from Fox News. This is not a partisan talking point; we may now end up counting the consequences in lost human lives.

What brighter red lines could possibly be crossed? If this isn’t the moment to draw your own line, what would be?

At minimum you could push for a clear statement by the Fox board that it will no longer countenance bigotry or life-threatening disinformation. This doesn’t mean abandoning conservative programming. Lachlan Murdoch has called Fox “the loyal opposition” to Biden. Asking tough questions is a worthy lane; spreading dangerous lies is not.

This isn’t about the First Amendment or cancel culture; we are talking about the values of a private company that can play a role in restoring the guardrails of truth and decency.

But if you are really serious about restoring “the country’s antibodies,” you could push Fox to sever its ties with Carlson, Sean Hannity, Laura Ingraham and crackpots like Jeanine Pirro. You could easily replace them with commentators who could serve your audience without leading them into the fever swamps of white nationalism or crackpottery.

Of course, speaking out might cost you your Fox board seat. After all, reining in the most popular voices on Fox may not add to the bottom line. But is a lost paycheck from Rupert Murdoch really worth the price of your silence?

History hasn’t finished with you just yet, Paul. And your friends, of whom I am still one, are still waiting.

P.S. You might also want to give our mutual friend, Ron Johnson, a call. He could use some good advice these days.