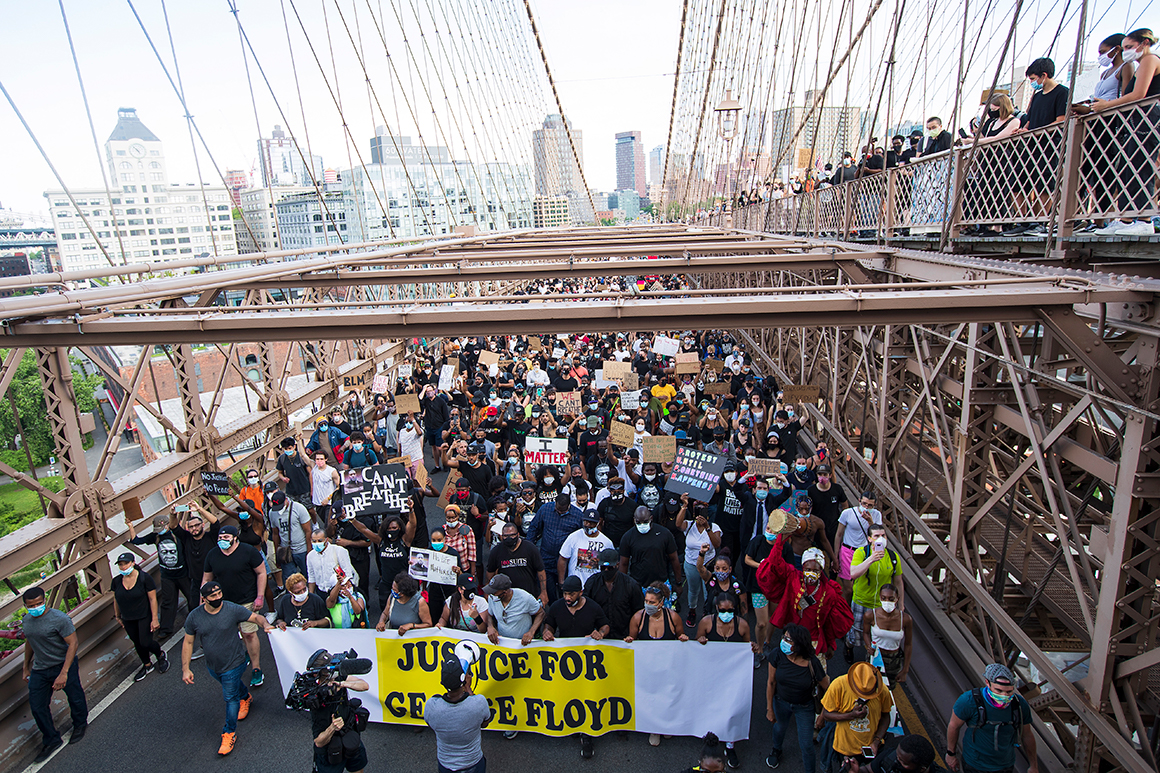 The NYPD has suspended two of its officers without pay for their behavior during Black Lives Matter protests last week, Mayor Bill de Blasio announced Saturday morning — his administration's first punitive action toward cops connected to the demonstrations.

The two officers, plus a supervisor who has been reassigned, are facing additional disciplinary action after videos posted online showed one officer throwing a woman to the ground and another pulling down a protester's mask to pepper spray him, according to a statement from Police Commissioner Dermot Shea dated for Friday. More investigations are underway, de Blasio added.

“These incidents … are disturbing and run counter to the principles of NYPD training, as well as our mission of public safety,” Shea said in the statement. “The actions by these officers stand apart from the restrained work of the thousands of other officers who have worked tirelessly to protect those who are peacefully protesting and keep all New Yorkers safe.”

Two police officers in Buffalo, N.Y., were also suspended and then charged Saturday morning with second degree assault of a 75-year-old protester after a video of the incident went viral.

De Blasio has defended the actions of the NYPD during the last two weeks of protests across the five boroughs, which have sparked derision from many of his former aides, activists and New Yorkers who helped sweep him into office. The mayor has also dismissed journalists like WNYC’s Brian Lehrer when they presented him with videos of unprovoked police brutality against protesters, saying he has seen different protests where police are not engaging in behavior protesters have accused them of in other parts of the city.

“I want minimum intervention, minimum force, lots of restraint. That’s what we’re seeing and I’ve heard plenty of examples of police negotiating, communicating, and getting it right,” de Blasio said at a press briefing Friday. “That’s what we want to see in New York City, and I want us to get past this phase, these painful few days, and move forward.”

"I said right away, after Buffalo, that I think the [district attorney] should look at it. I think there was criminal liability from what I saw on the video. I think what the mayor did, what the district attorney did was right, and I applaud them for acting as quickly as they did," Cuomo said at his daily coronavirus briefing when asked about the charges.

Unlike some other U.S. mayors grappling with outrage over police killings in their cities like Minneapolis and Louisville, Ky., where George Floyd and Breonna Taylor were killed, respectively, de Blasio has not appeared at any of the nightly marches or addressed protesters directly. And amid increasing calls from the City Council to cut the NYPD's budget, the mayor has said it would be unwise to take any more from the department than was necessary due to fiscal constraints brought on by the coronavirus.

“The reforms made within the NYPD are progress, deep progress,” de Blasio said Wednesday. “But for folks who say ‘defund the police,’ I would say that is not the way forward.”

Shannon Young contributed to this report.

READ:  Trump's battle with the military heads to West Point